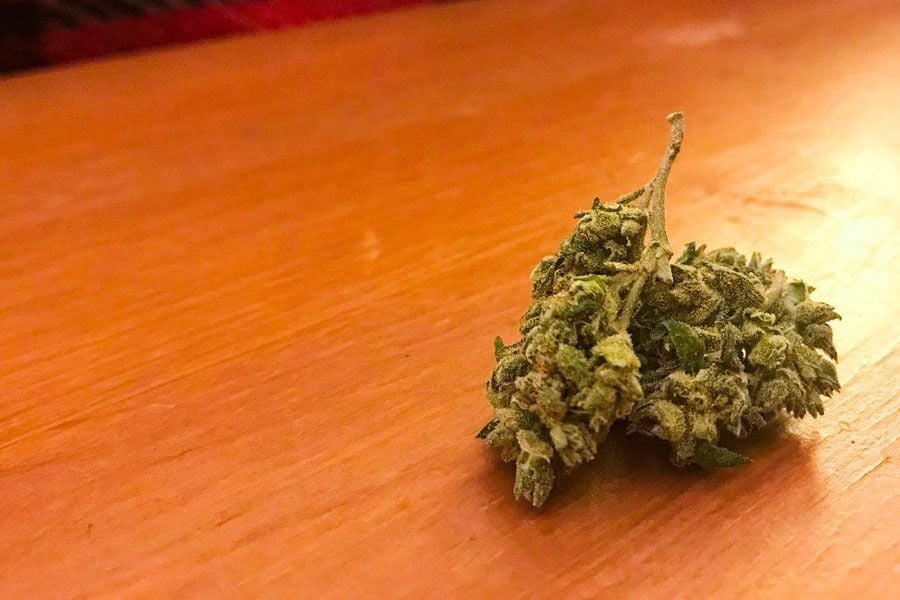 This formidable Indica-dominant hybrid of Headband and Skunk #1 is very much my shit, so take what will be a ringing endorsement with the grainiest grain of salt. Namely, Headband x Skunk #1 is one of those strains that veers into opioid territory it’s so powerful.
I make that comparison because it’s a bit taboo — you’re not supposed to compare this kind of medicine to that kind of medicine — and because there’s growing belief that weed is actually an “exit drug” and useful for those trying to kick harder drugs.

I have friends that say weed weaned them off of dope and that’s just anecdotal but a Columbia University Irving Medical Center study recently showed that states with medicinal cannabis show a 20 percent dip in opioid prescriptions.

So yes, Headband x Skunk #1 has some real opioid-like qualities. Music sounds better with it, more dynamic — like if you could put a microscope up to sound and get little parts of it even clearer — and you may find yourself staring off, which is especially easy to do when the pain relief is so intense that you feel almost entirely numb, floating or sinking or vaporous or all three all at once somehow.
Even the little things, Headband x Skunk #1 does right: I love how moist this strain stays, even weeks later — it’s almost gummy — and it looks like some craggily and mean sea urchin or something, each leaf sticking out, distinct from the others.

Indeed, there is something menacing about this hybrid. A sense that it is sneaky and daunting. There’s an almost molasses smell to it, sweet and bitter, and those flavors sting when you inhale, as if the smoke’s winding around your tongue and throat and tightening. It will overwhelm you.
For me, I really enjoy sparring with it, fighting it and also allowing its somnambulistic effects right in. I even enjoy losing to Headband x Skunk #1, and you will lose. It is too much. So I shrunk down and felt OK with that.
I thought of Harlan Ellison’s short story, “I Have No Mouth, and I Must Scream,” where the narrator who has been transformed, described themselves like this: “I am a great soft jelly thing. Smoothly rounded, with no mouth, with pulsing white holes filled by fog where my eyes used to be.”