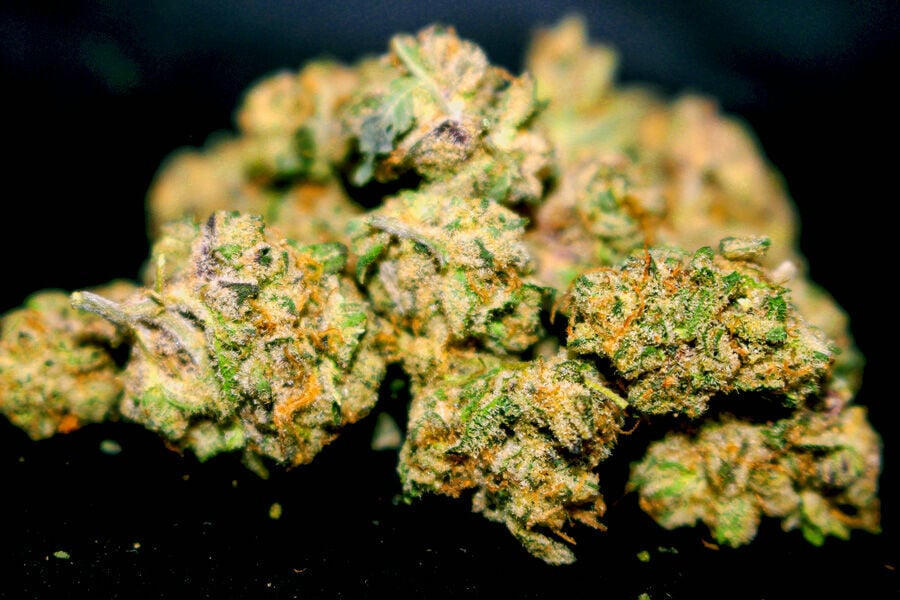 Just last month, my wife and I found ourselves celebrating our 23rd wedding anniversary, which always gets me thinking about wedding traditions. The couple saving some of their wedding cake to share on their first anniversary, things like that.

So it was in that spirit that the cannaverse sent me careening toward Rocky Mountain Medical recently as my initial destination turned out to be closed as I came knocking (universal reroute FTW!). I turned to my recent Weedmaps search history and looked for other spots I’d been scoping out in the vicinity when I saw that RMM was at the top of the list. As I looked at their menu online, I noticed it was fairly sparse.

Still there were a couple of strains that caught my eye, but when I arrived in person and caught a glimpse of the cake, well that had me at hello, feeling like it was love at first sight.

Wedding Cake, or Triangle Mints #23 as it’s also popularly known (as I would later learn from my research), stems from the Triangle Kush family crossed with the Animal Mints crop, and was for some reason absent from RMM’s online menu. Lucky for me, it was in abundance on their shelves. Our 23rd anniversary and a strain #23 that goes by the name of Wedding Cake? Oh, yeah, I hear you talking to me, universe.

Rocky Mountain Medical, a tiny stop on the Springs’ green scene tour, grows all its flower hydroponically without pesticides or chemicals, according to the budtender, and I was eager to see how that would translate through their product. They are also a source for Bloom County green (for any of those, like me, uninitiated in the Denver brand who might be curious, but not curious enough to make the trek up I-25), though be warned that flower comes at a higher premium. For me, the Wedding Cake was enough to have me saying “I do” and taking the plunge toward this promise of wedded bliss of the baked persuasion.

And blissful things would be! For calming and rapturous waves were just waiting to be unleashed through the touch of the flames. And in that moment, all was fire. The buds were small, but they were bedazzled in beautiful trichomes and dusty with the dankness. The flavor and smell were both robust and alluring, playing with the senses and engaging them in a floral rhapsody of anticipation. The top chords absolutely blasting forth a fruity aromatic aura, with some sweet gassy/Kushy notes permeating the bouquet.

It definitely brings to mind hints of yellow cake as the aroma takes over the air. The flavor picks up right where the bouquet leaves off, hitting all the same notes with a slight minty bite that finishes on the tastebuds following the more melon-like flavors that flood the front end.

The buzz isn’t one that’s about bowling you over when it strikes, but instead is a much more mellow experience from jump to slump. It comes on smooth but maintains an indomitable Indica weight underneath it all, gently pulling at your senses.

Maybe it’s the power of the sweet tooth taking over once the Cake enters the system, but this is some straight-up munchie weed. Activating the appetite and immediately sending it into overdrive. All I can say is, be ready to eat before the bowl is fully cashed, and your belly even really empty from your last meal. This strain doesn’t care about your meal plans or silly snacking schedules; it will repeatedly send you on cabinet raids through the kitchen when the bell goes off and you know you’re baked.

My visit to Rocky Mountain Medical was one of those surprise moments of universal alignment, where the ganja gods had taken the wheel and steered me toward a perfect 10. And that is precisely what I found in this hydro Wedding Cake from the RMM grow. You are most definitely going to want to arrange a cake tasting of your very own.