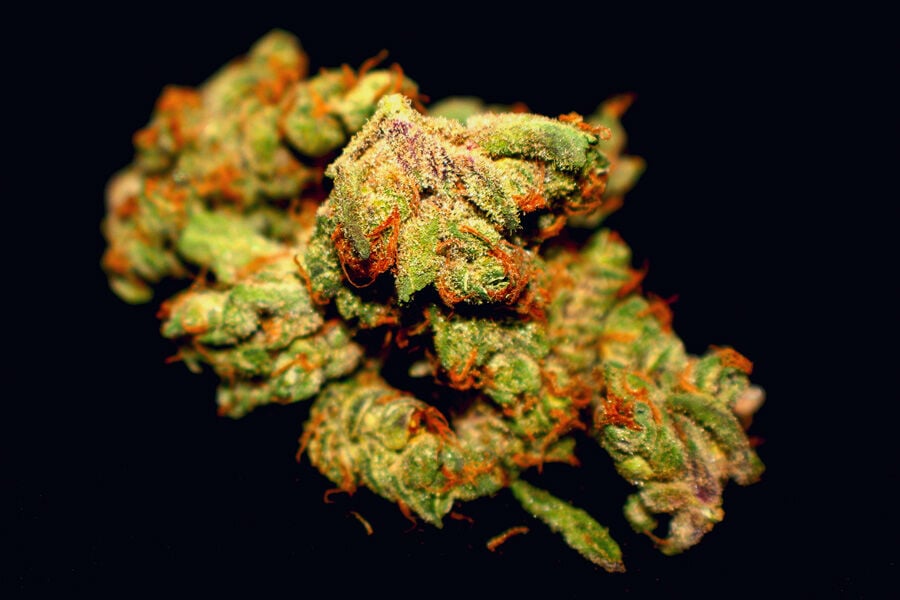 Still riding a bit of nostalgia from my last couple of green go-rounds, I decided to revisit a dispensary that was a former caregiver of mine. This time, I aimed my critic’s pen toward the flowery offerings of A Cut Above’s Fillmore location. I have always been a fan of their floral arrangements, and their shelves did not disappoint on this trip either; they overflowed with an abundance of options (all of their own grow, to boot). A friendly and informative chat with the budtender directed me to some Banana Cake #3; I was told it hit all the high points I had asked after. It was potent, tasty and leaned Indica, so I was totally ready to ride, eying a fat slice of that cake for when I got home.

The BC#3 is a cross between Banana OG and Wedding Cake, though Banana Cake usually counts Cheesecake as one of its parent strains. That did not detract from this delightfully delicious treat. Now, most times when I am trying a new strain, I will grab the small chillum and go in light for the sake of the initial tasting/review. Maybe it was that old sweet tooth of mine biting into my routine with its influential hunger, but whatever the reason, on this day I grabbed a full pipe and packed the bowl to the brim. That may have been a mistake for my first taste of the cake. I was not sharing, and as such, had to take the whole bowl and high on myself. Was I up to the challenge? Could I tackle this Rocky Mountain High with skills enough to honor those heads who had come before me? I think the mere fact that I was running through this assortment of random queries only a few tokes in was proof enough that I was beginning to have my doubts.

The smell was potent, and not at all bashful about busting up out of the jar and saying hello. “That’s a spicy ’nanner,” I said to no one as the aroma hit the air, blending a sweet, earthy bouquet with a peppery flourish. The flavor certainly followed suit, packing a profile full of sharp blossoms with that sweet OG punch, the sharpness carried by hints of clove, but balanced by some sweet candy bites, blending so smoothly as to offer a slight vanilla-like finish underneath it all. Kiefy puffs of fluff made for some exciting-looking, if a bit stringy, buds. But make no mistake, those puffs of fluff were on point and hit you like a chronic, consciousness-shifting, three-tiered cake!

It wasn’t long after the flower met the fire that the fog moved in. It settled in up top first with a slight heady lift that raised the eyebrows. But it didn’t linger there long, moving into a giggly high and moving deeper into the body, too, buzzing with a more energetic push that almost lures you into a false sense of security. For it is then that the high sneaks up on you in a completely different ’nanner manner. That’s that final layer! The heaviest bit comes in at the end and weighs you down completely, bringing out the couch-locky goodness like a champ from the Banana side of the parentage.

Banana Cake #3 will launch “loony thoughts into the bending of your mind. You reach for something high, but it’s a mountain that you’ve” climbed, in the immortal words of the band Cake. So cake with caution, my fellow cannaisseurs.