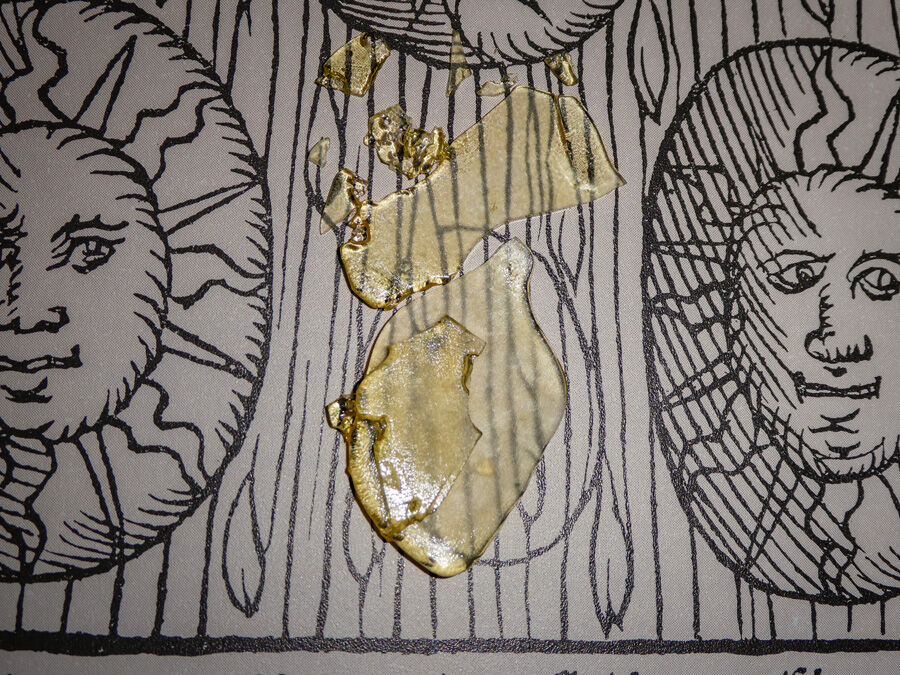 The propane hash oil gets me so stoned it propels me all the way back to the Stone Age.

Whenever I get the munchies, I always want a banana. The minute it enters my mouth, I’m struck by strong flashbacks of being a monkey or a yeti or some other type of simian. These psychedelic and transcendent hallucinations are hard to translate. Maybe they are a form of genetic memory from the collective unconscious or remembrances of a past life.

Whatever the case, these mirages can overwhelm, so before I’m saturated with an obsession about my dharma and full of disquiet about the transmigration of the soul, I gravitate toward Banana Piepaya. A whiff of this golden shatter makes me want to yell like Fred Flintstone, “Yabba Dabba Doo!” And dab I do. The propane hash oil gets me so stoned it propels me all the way back to the Stone Age.

I fell through the looking glass that is shopping in 2020 and waltzed on down to Grow Life for this flavonoid-filled hash. This dispensary is classy! Its Miami Vice-colored logo marries well with the tropical and fruity strains on the shelf. It feels like a gem-laden oasis in the desert, but instead of water in the dunes it’s terp diamonds and high-grade chiba-chiba. Being an industry professional myself, I cannot help but notice a focus on quality over quantity. Grow Life does extractions through its Wax Poetic brand, so as a consumer it’s nice to know that they follow their product from seed to sale.

This Banana Piepaya shatter blasts with undertones of nanners and mango, plus notes of Grandma’s pie dough. My fiancée likens the taste to stale pizza crust whereas I equate it more to pizza dough mixed with pineapple. A lot of concentrate these days is created from trim, which isn’t bad per se, but one really tastes the nug in this nug-run shatter. If you’re a tea head that really needs to taste the jazziness in your jazz cabbage... Grow Life’s grand and glorious ganja will scratch your itch.

As a grower myself, I can attest that Banana Piepaya is a dazzling and exotic strain. Its parent strains are Banana Pie and Papaya, both heavy Indicas, and the terpene profile seems like it would include terpinolene, limonene and especially camphene. It’s a strain that throws you in-da-couch and you likely won’t get back up for a while, though the dankness of this high left me feeling animated and invigorated before passing out.

Fair warning though: Before the sandman crept on in, I had the worst case of munchies. You’ll eat everything from the mints in your purse to the ramen at the bottom of your pantry. This is not surprising considering it has over 13 milligrams of Cannabigerolic acid (CBGA), which — in addition to causing serious munchies — is known to help with pain and inflammation.

Although my daydreams of being a gorilla still seem surreal, this strain reminds me of a line from Carlos Castaneda’s book The Second Ring of Power. “Don Juan had always said to me that our great enemy is the fact that we never believe what is happening to us.” Many people don’t believe that Don Juan from Castaneda’s books was even a real person, but this ink slinger chooses to believe. Fire up a bowl and put some Banana Piepaya shatter on top, let this hash loosen up your mind, and maybe the impossible will all seem just a little more probable.