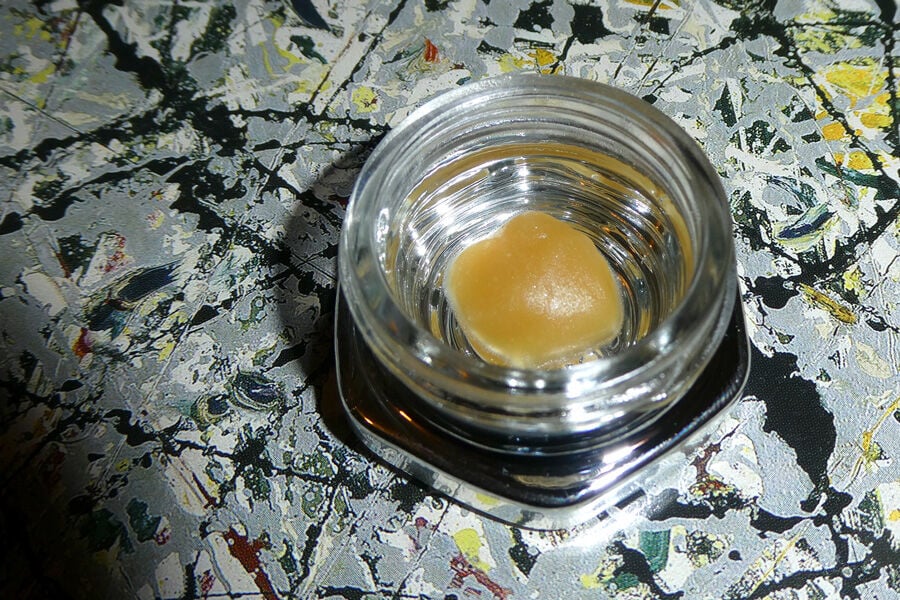 "Gas, ass or grass... nobody rides for free.” The old biker saying that some theorize originated in the ’70s is in my mind as I pull into Elevations. The dispensary’s north location appears to have once been a gas station, and the pumps sit empty and almost camera ready. The green fairy that is ganja reminds me I’m in need of some elevating, so I shuffle and shimmy my way in.

The mom-and-pop vibe and the feeling that the budtenders might be a tad overworked at this drugstore make for a tepid start. I stop dead in my tracks with the nostalgia of my former career as I stare at their endearing snow-white Christmas tree. Being that I used to be an overworked MMJ badge-holder myself, I drive home with the reminder that some of the most powerful dank I’ve ever had came from unexpected places.

Before I trip, thinking about trimming and bodacious scissor hash, I slash open my bag and get battered by the batter I’ve found. The concentrate’s name is alarming and jarring, but I research its extraction facility: Single Source Solventless. Stars form in my eyes! “High Fructose Corn Syrup” is just the strain name, and this resin was extracted lovingly with only ice, water, heat and pressure.

Sentimentality and schmaltz strike as I remember making rosin by squishing some bud with wax paper and a hair straightener. A lot of people may not know the difference between something like butane hash oil (BHO, which means butane was used as a solvent to extract the resin) and solventless resin, but it’s very simple: Most hash is extracted using some type of solvent like butane or propane, whereas solventless processes just extract those life-giving terps and trichomes in a minimalistic fashion, usually involving ice and water, although there are a number of methods.

Advocates of solventless extraction champion it as being healthier and cleaner (essentially organic, although until there is federal legalization, no one can use that term.) Whatever the case, there’s nothing wrong about extracting with solvents, but many in and out of the industry can at least admit, solventless hash has some of the best grams.

Some of the most powerful dank I’ve ever had came from unexpected places.

High Fructose Corn Syrup’s parent strains are OZ Kush and GMO (bred by Full Moon Genetics). Both are Indicas, so I felt that couch-lock heavy like a hog, my eyes drooping. The smell of butter cornbread and cornmeal mixed with that great green goddess stank and complemented the taste very well. This one categorically extorts the user’s sense of umami… It has a savory feel and it evokes flavors of olive oil and the lard found in the most outstanding of Mexican cuisine. The texture of hummus only furthers the quality, and it’s hard to miss the very subtle hints of soy sauce on the taste buds. Using my nectar collector to suck every last drop, I think of what Single Source Solventless said of this batter on Instagram: “She’s a special lady, Terps hard to explain. Gotta try this one to understand.”

Slurping up this full-spectrum live rosin batter with my vape pen, I start having my usual daydreams. The part of the holidays that is closest to my heart chakra is how people are more open-minded and nicer to each other, more giving, etc. So… give alms to the poor, don’t be a Scrooge or a Grinch, and give freely of your grass. Happy Holidays and best regards from this pard! Until next year...