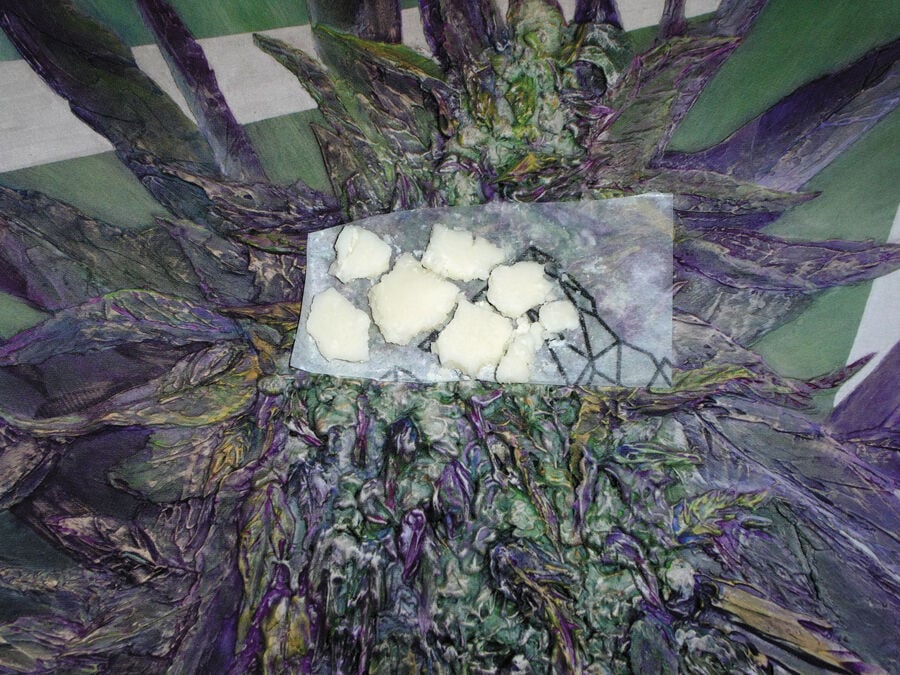 Witch, in Español, is translated to either bruja or brujo.... Basically a female or male witch, respectively. I always appreciated the English designation though; the idea that a woman is a witch and a man is a wizard or warlock always made sense to me. Women have a natural  propensity for magick and usually are more powerful in the ways of the psychic, prophetic and parapsychological than men. Being called a witch as a man is a compliment of the highest caliber, so I was excited when I found some Witches Weed Budder at Lux Leaf! I thought it might help me get more witchy, instead of being just another wearisome and witless warlock.

I thought it might help me get more witchy, instead of being just another wearisome and witless warlock.

The strain is a mix of San Fernando Valley OG Kush, Cindy 99 and Chem Dawg. The terpene profile is quite the witches’ brew, but I picked up heavy traces of beta-caryophyllene and linalool, plus a bit of beta-myrcene and alpha-humalene. The strain is mostly Sativa, but it was an anodyne for me and helped me work through a cold with a much-needed body high. Many have described the strain as being fruity, but this batch conjured up a taste of buttermilk pancakes and wafted with a smell of mussels and clams — fresh not cooked, perhaps in a shot glass with a dash of salt — just the way I like them. But, lo, hunger didn’t take over on this batch, so no munchies for me.

Although I’ve liked the Champagne line from White Mousse (which made this product) before, it seems their process took too many terps and too much tastiness out of the leaf for my liking this time. But Lux Leaf as a dispensary made up for it in other ways.

Although the concentrate made me want to pencil in an 8 score, the general mien of Lux Leaf colored me content. The owner’s fiancée has covered the place in large chic canvases — her art depicting the cannabis plant — that were textured and reminded me of a hippie Van Gogh (you can buy greeting card versions of her art, too). Lux Leaf also participates in the Green for Green program (greenforgreen.org), which describes itself as “the green movement for the green industry” and helps dispensaries mitigate the less sustainable aspects of cannabis packaging. There’s a lot more goodness at Lux Leaf but puffing on their product made me go gonzo and forget — which is a sign of the medicine’s effectiveness.

Speaking of gonzo, my dear readers, I need to address a regret. In my last piece, I reviewed a strain of bubble hash called Don Shula — and oh, lawrdie! I’m worried I made one of my idols shiver in his grave! Hunter Stockton Thompson wrote about Shula for Sports Illustrated, so not taking the Don Shula reference as a chance to mention a writer who has affected me more than most — I deserve some lead from one of his hand cannons in Woody Creek.

So to atone, let’s double it up with two quotes from a man who liked to stand up for all the witches and weirdos: ”I have always loved marijuana,” Thompson once said. “It has been a source of joy and comfort to me for many years. And I still think of it as a basic staple of life, along with beer and ice and grapefruits — and millions of Americans agree with me.”

Well Hunter, it looks like I am in need of one more nug of your wisdom, what did you say about witchy weirdos like me? “When the going gets weird, the weird turn pro.”

Well mates, let’s grab some of that magick mota and let’s... get... WEIRD!