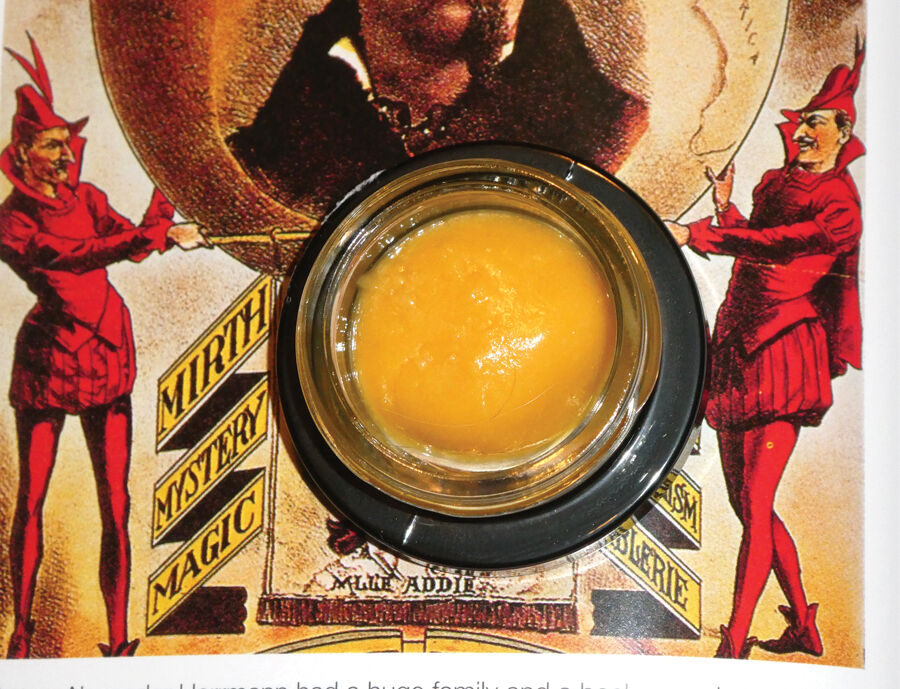 Things have been tough chez Terr Thompson. My beloved 15-year-old shiba inu Julio is getting ever closer to crossing that Rainbow Bridge. His wobbly gait and the turning of his black-brown eyes to cataract blue has prompted my wife to start using that cursed word... euthanasia.

A lot of places may take concentrate seriously but Apothecary Farms bills itself as “Colorado’s First Concentrate-focused Cannabis Dispensary” — and it shows. The facility and its décor may be typical but the selection and quality are far from it. You can find Apothecary Farms-branded hash in a lot of locations but going to the source has some benefits. Since they do their own extracting, you get their usual lineup of strains from their in-house grow, but they never lack for variety because they usually have a selection of extracts pulled from other dispensaries’ flower as well. Apothecary Farms also offers hash in 1-gram, 4-gram and even half-ounce volumes.

And... I learned something new. The budtender told me hash distilled from their own grow is typically made with uncured flower to preserve the highest quality flavor profile. I knew live resin was specifically made from flower flash frozen to preserve the terpenes, but I never knew a “concentrate-focused” dispo would intentionally not cure their flower for better extraction. I knew I had to taste this ASAP...

Leafing through my bag I found what I needed to lighten my depression — a 4-gram jar of Grape Cola Batter. Batter is just live resin whipped into a fluffy consistency, and this batter is bomb! Grape Cola has the parent strains of Pre-98 Bubba Kush and Bubba Kush. And Pre-98 is my favorite Indica of all time. The pain relief is staggering and the strain helps me emotionally and physically. And its narcotic effects are just what the doctor ordered for my shiba stress and lack of sleep. As for the smell, it lives up to its name — like grape soda with cheesy notes. The taste is even better — a Grape Kool-Aid aftertaste and that nice Bubba Kush bang. I’m even able to eat and loosen up after losing sleep over my furry friend. In short... It’s A+!

Batter is just live resin whipped into a fluffy consistency, and this batter is bomb!

“Dogs are our link to paradise. They don’t know evil or jealousy or discontent. To sit with a dog on a hillside on a glorious afternoon is to be back in Eden, where doing nothing was not boring — it was peace...” is one of my favorite quotes from writer Milan Kundera. I think of it as I go overboard with the Grape Cola because all I want is more time to do nothing and everything with my majestic, princely little fox-dog. I use this strong smoke to get me to oblivion because I’m so upset — and then I remember a better quote from an even better writer, Konrad Lorenz: “The bond with a dog is as lasting as the ties of this Earth can ever be.” I cuddle up to him, honor him by spending as much time as possible as I can with him. And I think, if there is a heaven, I better be up there one day getting stoned with my Julio by my side.

So I’ll end here with an even better guy (Will Rogers) who had the best quote: “If there are no dogs in Heaven, then when I die I want to go where they went.”