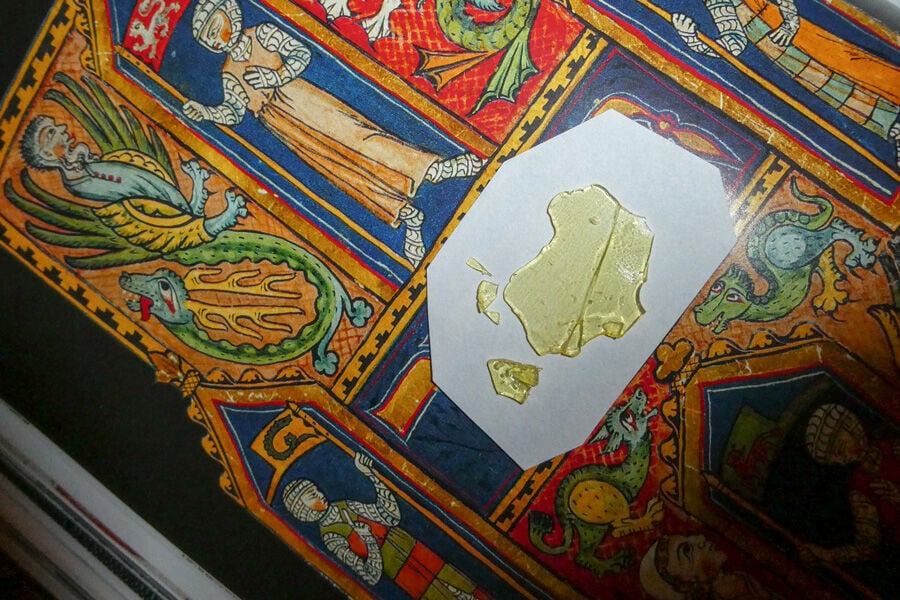 The optimum and preeminent cannabis products, the ones that even a tastemaker or critic can’t help but cherish, are those that help me in my mystical and metaphysical activities. In his book, The Magical Revival, Kenneth Grant recounts the story of London artist/occultist Austin Osman Spare, who once met two “smatterers” who dabbled in the occult. He gave them ample warning of the danger, but eventually decided to show the skeptical couple his paranormal ability.

After conjuring a thoughtform with a green face and black, oil-like eyes, he apparently so spooked the pair that one died a few weeks later and the other ended up in a mental asylum. I like to think he blazed some bomb bambalacha before the incident, the kind of stuff that gets you stoned enough to be at your best in a magickal way.

I like to think he blazed some bomb bambalacha before the incident.

On this occasion, I visit Briargate Wellness Center for that high. It’s a hard-to-find store — which isn’t fair, considering it’s one of the best dispensaries I’ve ever been to, despite being hidden behind an animal hospital. A medical dispensary in its most spartan form should remind one of a doctor’s office, and this place, decorated with framed THC crystal art, fits the mold.

After chatting with the staff and owners for a bit, I’m wowed by their knowledge of strains and their growing expertise. On top of that, I notice they carry Romulan, a strain I haven’t seen since I worked at a dispensary in 2015 (I’m a sucker for strains from the ’90s and early ’00s). I walk out with an eighth of that and some wax and Lilac Apple shatter by White Mousse Concentrates, but I’m confounded by a term I see on the packaging: Champagne concentrate. Even as an industry pro, I’d never heard this before.

I find an explanation on White Mousse’s website: “The filtering process of our Champagne line generates a flavor that is more true to the plants [sic] natural ratio of terpenes before it is harvested and cured.”

Whatever the case, this is some mind-blowing shatter. The concentrate was extracted from Zour Apples (a noxious Indica-dominant hybrid) and Lilac Diesel (a 50/50 hybrid) but the Indica seems to stick out more — no matter how much I’ve eaten, if I smoke this shatter, I can’t stop eating.

It reminds me of my trimming days and tastes just like the scissor hash that you pull right from the female plant on harvest day... stinky, strong and pure. The taste and smell are similar to lemon-lime Gatorade powder, but also twangs out impressions of red candied apples, car shop chemicals and flower arrangements. It kind of reminds me of when my mom would take me to the Ikebana (Japanese flower arrangement) classes she taught.

Humankind has been reaching altered states for a very long time... to make us smarter, to help us evolve and transcend. It just so happens that Austin Osman Spare has wisdom that applies to the altered state this shatter helped me reach: “Anyone is capable of anything (will plus belief is ability) if they themselves create the opportune moment and incentive.”

The best broccoli in the bud business is that which makes your mind explode with magick and psychic power. Go transcend your current self with the help of some Champagne concentrate.