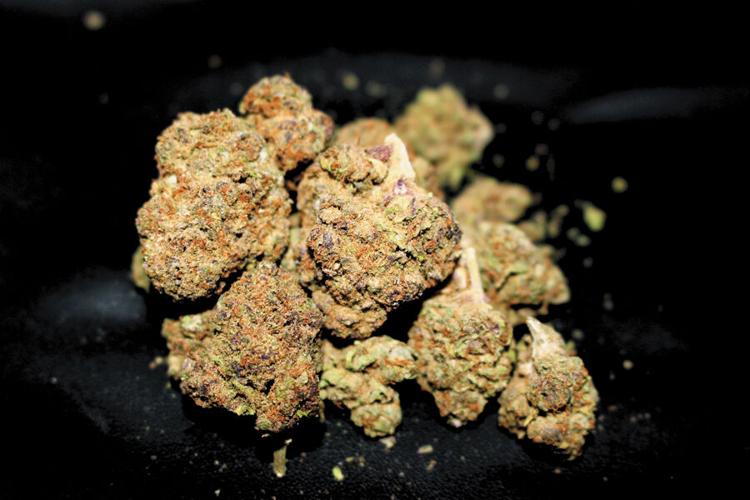 When I’m scoping out the Springs green scene for a new strain, my priorities typically fall along a routine set of inquiries about the leaf I’m looking at. I want to know where it falls on the Indica-Sativa spectrum. I want a look at the nug structure and appearance. I definitely want to get a sense of its flavor via its aromatic presence.

The percentage points it’s putting out on the THC front is fine information to have too. But it’s not something I let be a deal-breaker in terms of the dank I drop my dollars on. I keep in mind how those numbers typically get wielded by budtenders, who play a bit of a numbers game when it comes to picking their strains and smokables. It makes it somewhat rare for tenders to really push the flower that falls on the lower end of the THC meter.

Enter NuVue, a dispo that broke from this tradition in spectacularly refreshing fashion. I hit up their shop and the friendly staff showed me a couple strains that had a nice enough profile and nug structure, each testing out at over 20 percent THC. But then they pulled out a bit of a wild card. The Purple Kryptonite was only testing out at 12.15 percent THC and for this reason they found themselves shying away from dropping the rec.

This Purple Haze crossed with Kryptonite had an extremely stout aroma that smashed the senses in a way none of the other strains had done. Displaying such a pungent potency made it a standout. And with an eventual solid recommendation from one of the budtenders hyping it as his favorite herb, I could not pass it up. I had chosen my cheeba, and was ready to get my chronic critique on.

I dropped in some Gogol Bordello, with their track “Start Wearing Purple,” and dove right in. The Purple Krypronite has fluffier nugs that pack down sure, but don’t expect it to burn out before you do — this flower is super, man. Skunky sweet, with a strong gassy, violet bouquet. Which is exactly how it lands on the palate too, with strong diesel notes firing that are countered softly by a deep floral edge. There were tokes when it would even head to somewhat bready and cookie-like places, with stints and hints of lime rounding out and brightening the flavors the deeper you burn. This cannabis carries an overt and varied profile, no doubt, and it uses every bit of its hybrid structure to deliver across the spectrum from the terps it’s packing.

It wastes very little time altering one’s state of mind, as the Purple has a little lift off after only getting a few hits in. But after about a dozen there was definitely some foggin’ in the noggin setting in. The Kryptonite induces a super euphoric chill that smoothly soothes as it washes over you like a warm bath of tranquility, its calming waves of delight easing you into a canna-tonic high.

Not to insinuate that this buzz puts you in a near comatose state, just that it is weighty and invigorating at the same time, refreshing your system as the cloud takes over. Definitely a heavy hitter, the Purple Kryptonite did not come to play despite it’s low THC yield. And while, canonically speaking, in the DC universe, the effects of this color of kryptonite have never been revealed, I feel pretty certain in declaring that NuVue’s Purple Kryptonite could even ground the Man of Steel himself. If nothing else, it would definitely lower the Kryptonian’s inhibitions with ease.