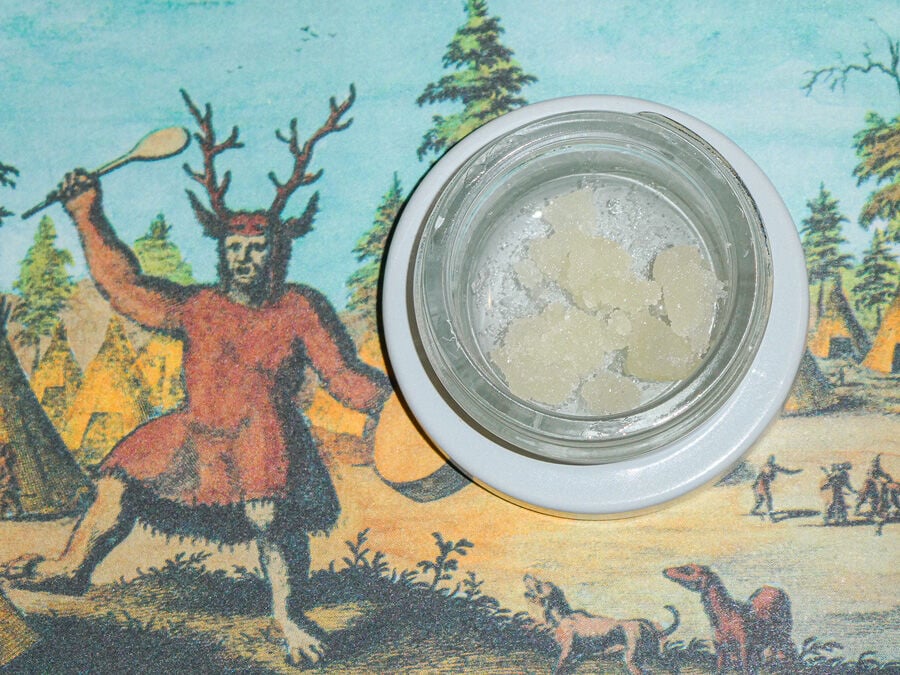 After reviewing the last dispensary, I was monkeying around and still felt like a baboon. And that night, I was kept awake by a mischievous raccoon and his yearling sidekick.

I love trash pandas, so my wife and I stayed up too late watching them on our roof through our loft window as our Chihuahua yowled to alert us of the furry intruders. And though it may have been enjoyable, the morning after, as always, was a different story. I needed to find someplace that would heal my aching head.

So, I tried to imagine flying underneath the road to distract me from my headache as I drove over to Zipz,a suggestion from my fellow cannabis reviewer Rob Bowen. I’m glad he keyed me in to this treasure. From the moment I parked my car, I could feel I was in the presence of greatness.

The place was tricky to find but as I reached the end of the cul-de-sac to which my GPS led me, I was greeted by the crème de la crème of murals. Zipz sports art depicting some Goliath ganja plants, trichomes and a psychedelic black and white hexagonal mandala accompanied by their blue and pink theme. It only gets better once you walk in.

You’re greeted by a tasteful sign with their name written in glass and pink neon. It reminds me of the LED lights used in indoor grows, and the afterglow illuminates a minimalist waiting room with a few shelves of various plants and succulents. The gentleman budtender led me in and let me know their groovy gimmick — they only sell flower by the ounce. Some may dislike the prepackaged ounces due to fear of the “bait and switch” tactics of nefarious dispensaries (showing a customer a better-looking product, then delivering something different that’s terrible). Zipz had no tricks and the budtender graciously showed me the contents of my prepackaged ounce. Arriving home and trying it all, there was not a single bad product in the bunch and the flower was top notch. It was all so revitalizing it was glorious. However, I became fixated on their Gorilla Glaze Full Spectrum Champagne Live Resin extracted from White Mousse Concentrates.

I wrote about “champagne” concentrate in a previous review (Lilac Apple Champagne Shatter from Briargate Wellness Center) but to summarize... The “champagne” refers to the extraction process that makes the hash more refined, focusing on my favorite part: the terpenes. Gorilla Glaze is a combination of the Sativa Gorilla Glue #4 and an Indica strain called Donut Glaze. GG #4 is ubiquitous and most cannabis aficionados have tried it, but the only info I could find about Donut Glaze was from Zipz, which said it was from Denver dispensary Allgreens.

Regardless, I can see why the budtender called it one of Zipz’s “signature” strains — it’s flawless, some of the best smoke I’ve had in a long time. It tastes like you combined all of Willy Wonka’s candy in your mouth at once (a sort of Willy Wonka secret sauce, if you will) and the smell is like if you smoked the earthiest and skunkiest Indica in a new car. It reeks of the terpene myrcene. The high leans intensely into the Indica side and I’m not surprised, considering the hash had 2.25 percent of CBGA (cannabigerolic acid). There’s little research on this cannabinoid but it shows promise in helping with a variety of symptoms caused by cardiovascular disease, cancer and metabolic disorders. Whatever the case, I feel relaxed, sleepy and as serene as I’ve been in a long time thanks to this medical grade hash.

No longer lost in a daydream of primates and raccoons, I had a new problem: I was so stoned I was trying to figure out how my own zippers worked. While I try to ascertain where exactly my zipper is, I encourage you to zip on over to Zipz for some Gorilla Glaze Live Resin.