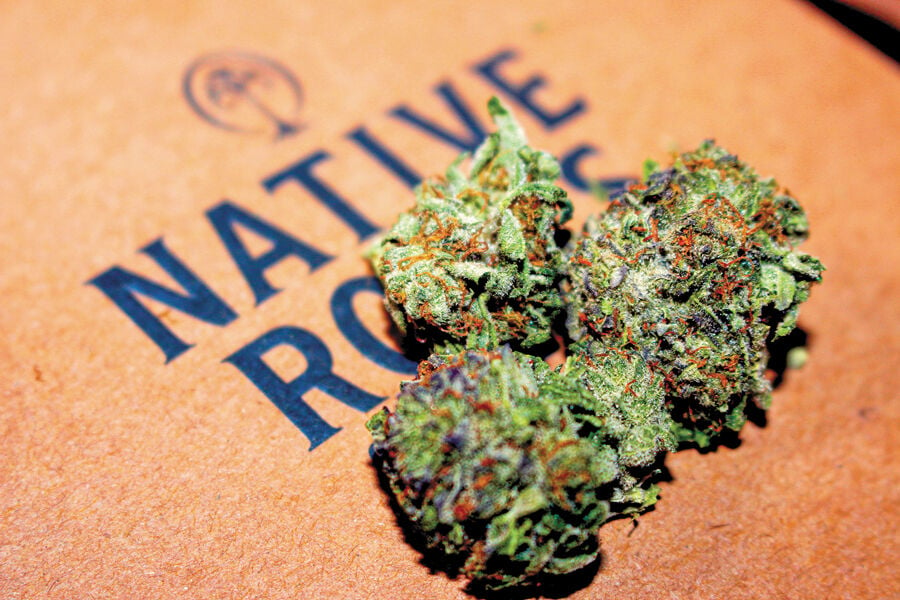 I recently broke my COVID-inspired hiking embargo with an 8-mile-plus trek up Pulpit Rock. Afterward, my lower body was aching for a little “releaf,” so I hit up Native Roots on Austin Bluffs. Native Roots is among the nicer stops on the Springs’ green scene, and with its very friendly staff, first impressions were quite good. The budtender brought out a “tasting tray” with small samples of their flower selection for me to choose from, and I quickly focused in on an eighth of their Kimbo Slice.

Now don’t call me Guy Fieri, but I do prefer that my dances with Mary Jane take me to Flavortown. I had my hopes up after looking into the Kimbo strain online, but when I finally got a taste of the flower, it was fairly underwhelming. In hindsight, that made perfect sense, given the exchange I had with the budtender. I mentioned that I prefer something “with a good flavor to it,” and they responded, “I like Indicas.” So yeah, there I was smoking something that tasted mostly like disappointment. And spicy pine cones. Or what I imagine a nice spiced pine cone might taste like, since I’ve never actually had the pleasure. The Slice was herbaceously earthy with a slight hint of sweetness hiding on the trails of the top chords.

I set out for a Saturday morning wake-n-bake to break in the new strain and see just exactly what the Slice was working with. While it won’t lock you to the couch or prevent you from going about your day, do be prepared for your perspective to be a bit askew as the Slice circulates through your system. It packs a potent punch with a head change coming in deep after only a few (rapid succession) hits (in pursuit of palate play). And then, after about 15 minutes or so, the high really comes sweeping through — with no effs given nor subtlety engaged.

Now don’t call me Guy Fieri, but I do prefer that my dances with Mary Jane take me to Flavortown.

I pulled out a song from my vault: Josh Ritter’s “Folk Bloodbath.” The strain and song paired nicely — as Josh sang “the angels laid him away,” I totally felt that. It was my mood, the smoke in my lungs effortlessly lifting me on high. My morning was laid back and buried under a thick haze of clouds like the Peak itself has been of late. I didn’t feel like 6 feet of clay was piled on top of me like the song would further suggest, but heaviness settled in.

The buds had the silver and purple this Colorado-based strain is known for, according to my research, typically finishing with a frosty cola construction. The Kush influences certainly show up in the buds’ appearance. For the most part they were fairly dense, but there was a bit of airiness still present here and there that indicated the plant was perhaps harvested a tiny bit prematurely (could be why the flavor/bouquet came up short, too). While disappointing at the start (solely in regard to flavor and aroma), the Kimbo Slice certainly finished strong!

And on that particular Saturday morning, the best part of leaving my bedroll was some Kimbo in my bowl. Easily a thumbs up.