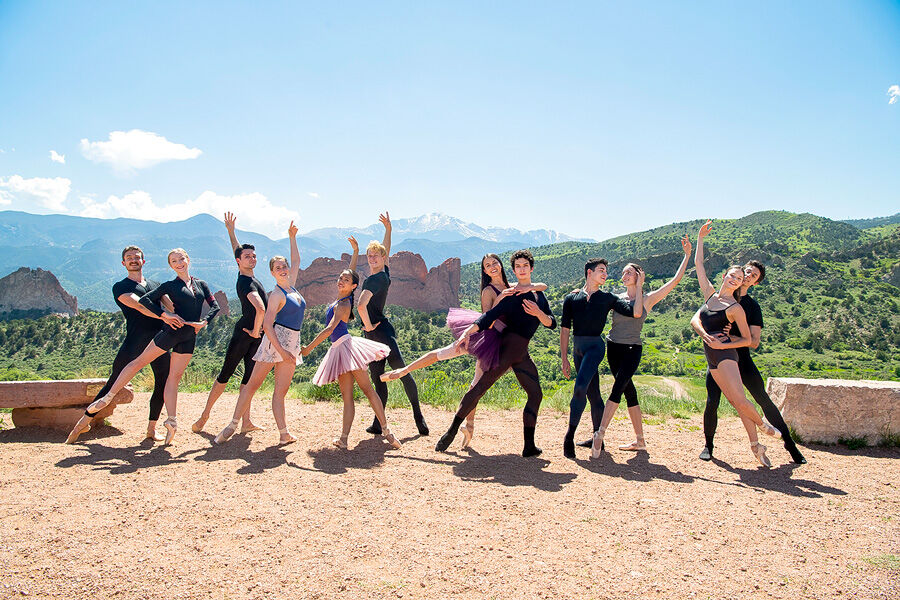 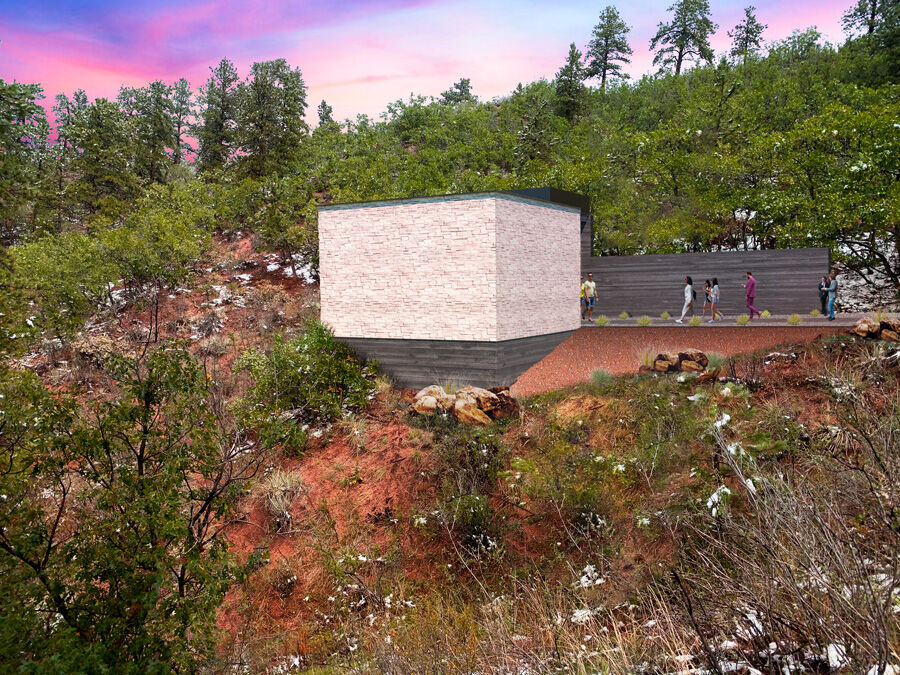 Rendering of the James Turrell Skyspace at Green Mountain Falls 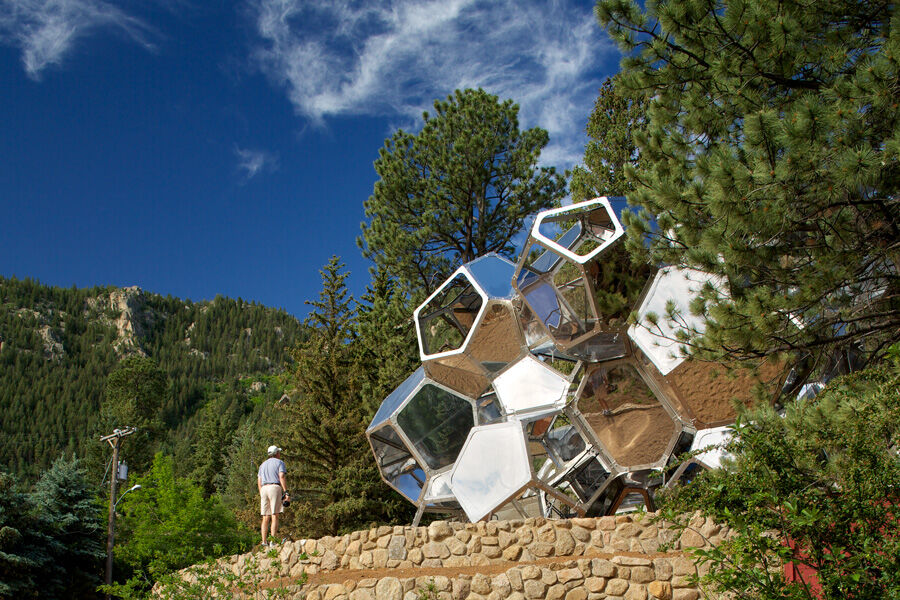 Drive just about 10 miles west of Colorado Springs, and you’ll come across Green Mountain Falls, a small town tucked away in a narrow mountain valley, below a highway and surrounded by forest.

For over a decade, it has been home to an annual arts festival, open to the public and spanning several weeks. It’s events like Green Box Arts Festival (June 21-July 11) that can put a small town like Green Mountain Falls on the map.

Christian Keesee — who co-founded the festival with his partner Larry Keigwin and son Blake Keesee — has been going to Green Mountain Falls since he was a child. His grandparents, John and Eleanor Kirkpatrick, founders of the Kirkpatrick Family Fund, the organization that oversees Green Box (and which Keesee now manages), owned a cabin in the area. “I really didn’t start going as an adult until after my son was born,” says Keesee. But even then, he found himself somewhat detached from the community, instead of actively participating in it.

“Once we started the festival, then all of a sudden I had a mechanism and a reason to start meeting people. And I have met some of the most elegant, some of the most noble people from that little town,” Keesee says. “I adore Green Mountain Falls, and I love the people who live there and make it what it is.”

This community emphasis is at the core of the Green Box Arts Festival, which, like the town, is small. Many have never been to Green Mountain Falls; many have never heard of it.

Even Scott RC Levy, who is now the deputy director of Green Box, lived in Colorado Springs for seven years before visiting Green Mountain Falls: “Green Box as an organization and Green Mountain Falls as a community is a very, very special place that, at the moment, a lot of people don’t know about.” (As it happens, “A Very Special Place” is the town’s motto.)

Yet, it is these characteristics — small, intimate, low-profile — that make the town an ideal host for the weeks-long arts festival. The size and location are integral to how it functions: It is part of the allure, it is central to the experience.

To put the festival’s size in perspective, Coors Field in Denver seats around 50,000 people. Red Rocks Amphitheatre in Morrison seats around 9,500 people. Green Box’s outdoor theater seats around 150 people. “We’re not in a large-capacity venue,” says Levy. “These are very small, intimate, exclusive events that guarantee a one-of-a-kind experience for every single audience member.”

Rachel Shortt, the festival’s marketing director, says it’s a unique experience for the artists as well. Because the venue is so small, performers and audience members are able to see each other face-to-face and connect with each other’s energy. “[Green Box Arts Festival] is really about the art and the experience and not so much the big stage, the big lights,” says Shortt. “It’s about networking and mingling and coexisting among the people who live here, the people who summer here, the people who happened upon the event. [It’s] really kind of at the raw heart of what [artists] do — sharing their art form with anyone who is curious.”

As a result, the town has become a unique setting for sharing and experiencing art. The festival removes art from the “establishment” and places it in a more accessible (and low-key) environment.

Keigwin and Keesee are heavily invested in the arts community beyond Green Box. Keigwin, an award-winning dancer and choreographer, is the founder of KEIGWIN + COMPANY, a modern dance company based in New York City. Keesee is founder and president of the Oklahoma Contemporary Arts Center, a board member of the Frick Collection in New York, a trustee emeritus of the American Ballet Theatre, and a trustee of the Kirkpatrick Family Fund and the Kirkpatrick Foundation.

Both belong to a realm that, from the outside looking in, often appears exclusive and elite — a world away from the local galleries and venues that ground the Pikes Peak region.

“The festival is not only an opportunity to celebrate art but a way to honor and preserve the town that hosts it.

But Green Box helps remove barriers to the art world with a festival that prioritizes inclusivity. Instead of buying tickets to a world-class ballet performance at the Metropolitan Opera House in New York City, you can sit in the grass and enjoy the same performance at Green Mountain Falls.

“The art world has a tendency to be intimidating for people,” says Keesee. “And I really have felt like one of the fundamental things about Green Box is we want to be totally non-intimidating.”

Green Box brings a wide variety of art to a place that doesn’t quite have the same art presence (or artistic resources or funding, for that matter) as places like Manhattan or Los Angeles. The multidisciplinary festival attracts people from the town and around the world to participate and perform. “This is a place where people want to come and where artists feel like they can be their best creative selves,” says Levy.

“[What’s been] the most touching is how trusting the town has been of me, of Green Box and our efforts there,” says Keesee. For the co-founder, the growth in community participation — and partners like Manitou Springs School District 14, Ormao Dance Company and Church in the Wildwood — has been particularly encouraging.

In 2020, Green Box had to make cutbacks to their festival offerings due to COVID. But they are returning this summer for their most comprehensive festival to date. Levy expects they will have their largest attendance this summer.

The foundational pillars of the Green Box Arts Festival have always been dance and installation artwork. Though over the years, says Keesee, the festival has evolved organically: “[I]n the last 13 years, incrementally, Green Box has changed in that we’ve tried to offer activities to include more and more people with different viewpoints and different skill abilities.” These incremental add-ons have included culinary arts events and summer camps.

Earlier this month, Green Box welcomed 12 new artists in residence, members from the American Ballet Theatre (ABT). During the festival, ABT will perform a world-premiere ballet created during their stay at Green Mountain Falls. Silas Farley, the choreographer, is a former member of New York City Ballet and the incoming dean of Trudl Zipper Dance Institute at the Colburn School in Los Angeles.

A Skyspace, created by contemporary artist James Turrell, is another highlight of this year’s festival. To reach the installation, which utilizes light and space to create a visually stimulating experience for the viewer, one must hike. Levy says that “engaging in this journey” — through nature to the installation and back — is part of the Skyspace experience.

To make space for the installation, which was commissioned by the Historic Green Mountain Falls Foundation, the town annexed part of the mountain, property that formerly belonged to El Paso County. “I thought it was a pretty great example of the community buy-in and excitement and approval of what Green Box is doing for the town,” says Shortt. This will be the first permanent Turrell installation in the state, one of only a handful in the world with a retractable roof, and the first on the side of a mountain. The Skyspace is still a work in progress and its dedication ceremony will be held in July.

The festival is not only an opportunity to celebrate art but a way to honor and preserve the town that hosts it. “I would say one of the things that we care most about is preserving this amazing place,” says Levy. “And so being the stewards of historic properties, whether they’re buildings or land that we have improved upon, really shows a commitment to the town. And we’re not trying to take away the town’s identity or culture but simply adding to it ... everything that Green Box does is a complement to what is already existing here in the town.”

With (what appears to be) the worst of the pandemic behind us, the art world is slowly but surely opening again. “Let’s get artists back to work,” says Keesee. “I think that is absolutely the most important thing. It’s not a time to try and use the pandemic as an opportunity to renegotiate contracts down. This is an opportunity to get people back to work and to get people back and to get the audience members back into the habit of coming to things and watching live performances... .”