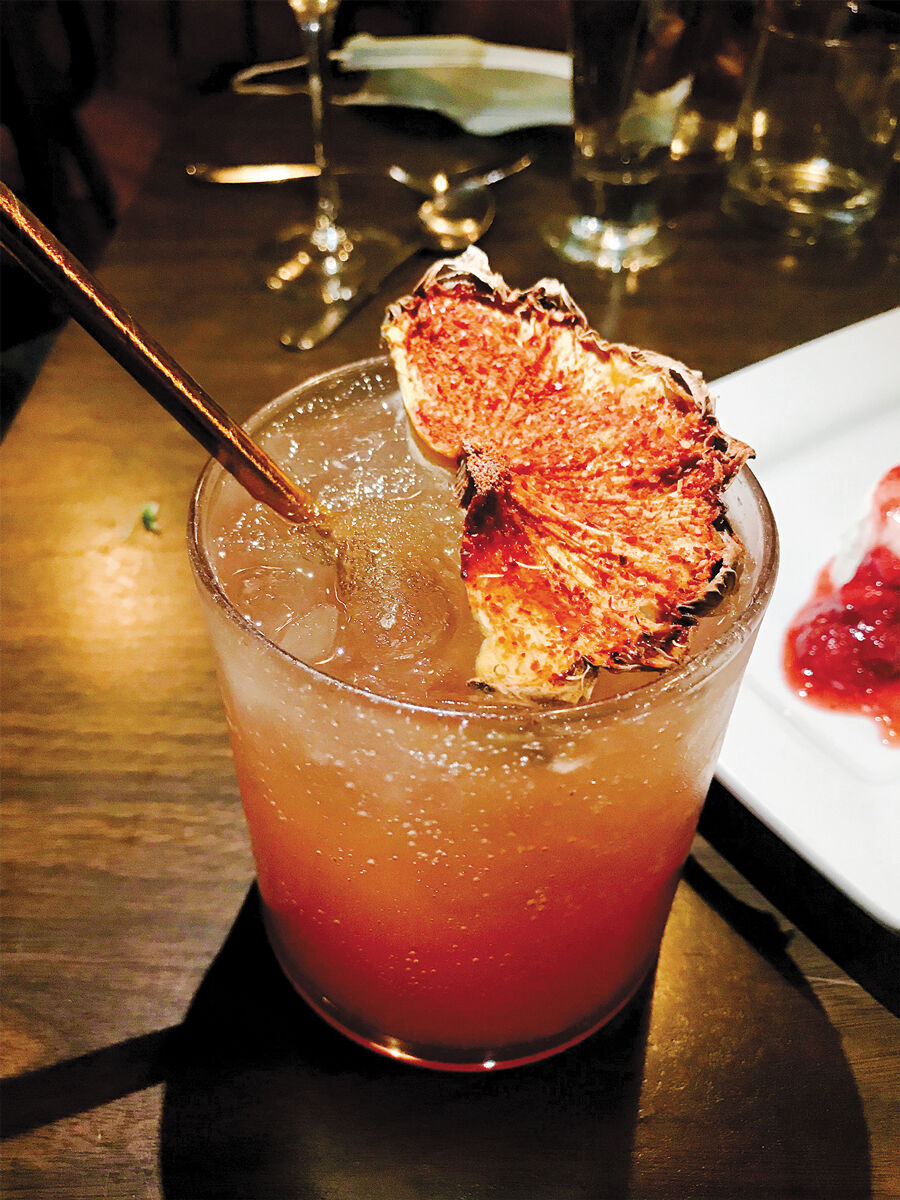 The Sandia con Piña pops with watermelon and pineapple notes. 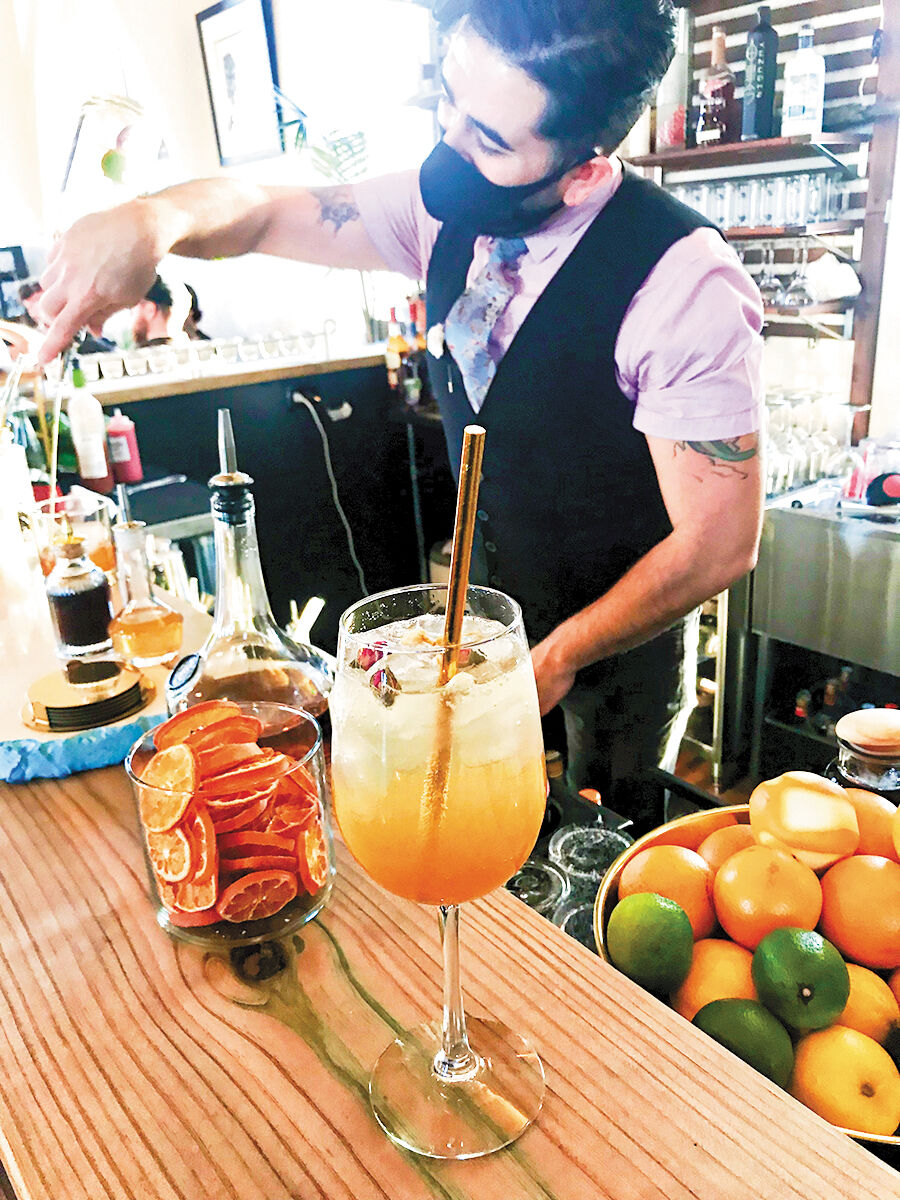 Love Thy Self: a non-alcoholic cocktail 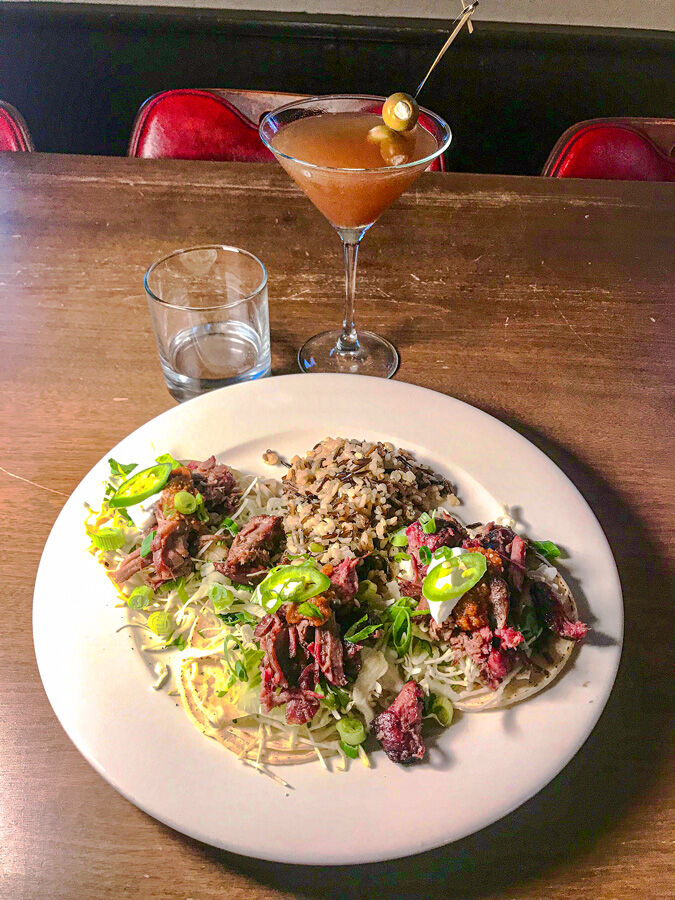 At my first Araucana Bespoke Cocktails sampling a couple months ago inside The Carter Payne, owner/bartender Anastacio GarciaLiley described his ethos to me in familiar culinary terms, utilizing the farm-friendly phrase “nose to tail.” It’s fine-dining chefs’ way of saying they utilize every bit of an animal, aging this and rendering that so nothing’s wasted; it’s the least they can do to respect the sanctity of life.

For GarciaLiley as a mixologist, that translates to religiously making his own cocktail ingredients and getting creative with citrus pith, for example. Instead of tossing it, he makes one of his bitters with it, utilizing other ingredients’ trim elements to make potent vinegar infusions and the like and composting whatever he can’t find a use for.

That holistic mindset translates into his unique drinks, which he tells me are meant to be as healthful as possible. That makes sense, given that GarciaLiley’s more than just the latest addition to the community-minded food hall (home to Local Relic Artisan Ales, Immerse Cuisine, BFD and Crusade wine bar) — he’s also the Health & Wellness Director for the Colorado Springs Bartenders’ Guild. In that role, he looks out for the physical and mental health of his industry colleagues. Wearing other hats, he’s competed internationally on the cocktail scene, having won regional battles and honed his craft during formative years at 503W. And prior to getting behind the bar, he was in the kitchen as a trained pastry chef with a cake-art degree — which explains his pretty, colorful drink garnishes.

“Bespoke,” originally hailing from the garment-tailoring industry, means “custom created,” and an Araucana is a beautiful breed of chicken, the black variety of which bears ornate, iridescent turquoise tail feathers. Convert that to a liquid and you get something enticing, at turns exotic, intoxicating in not just a boozy way, and above all beautiful and made lovingly, just for you.

That may sound like a lot of commitment for a first date with a new drink spot, but GarciaLiley’s warm nature and unpretentious personality will put you at ease, comfortable in this grand old church building where all entities focus on the best versions of themselves, be that a fantastic barrel-aged field beer, well-curated vino, killer curry or fish dish, or soul-stirring cocktail.

I appreciate that GarciaLiley’s also looking out for the non-alcoholic drinker, with a trio of $7 virgin drinks that are more like herbal treats. The Strength of the Stallion (listed as providing “immune support,” though included ashwagandha root is sold as an aphrodisiac and libido enhancer, ahem) elevates steeped chamomile flowers. The Love Thy Self, a “love potion to self” in GarciaLiley’s words, is a ginseng-ginko-rosehip tea that sees pretty rose and jasmine bud garnishes, and it finishes vanilla laced and honey sweet with smooth (not sharp, biting) cinnamon notes from sticks that steep for a week. Even the damn paper straw poking out of the drink is mindfully curated, with a shiny gold wrap.

Lastly, our favorite, the anti-inflammatory, soda-water-based The Tonic hosts a complexity of flavors held in such perfect balance that somehow you can pick each one out as you re-read the menu — like finding Waldo on a cluttered coloring book page. (“There he is, got ’em!”) Rosemary — check. Pineapple, cinnamon, clove, cayenne (with its breath of heat in the finish) — check, check, check. Then there’s lemon and apple cider vinegar acidity, green tea astringency, turmeric bitterness and a hint of honey.

That all sounds like too much to work, but it does. GarciaLiley had told me the key to his particular craft when I first met him: “It’s all about how I make odd combos work.”

We saw that on display during an earlier visit with a spicy daikon and tangerine Pisco Sour with Fresno pepper shrub and wild yam and horehound bitters. Plenty of people still haven’t tried the clear Peruvian spirit pisco alone. Nobody’s tried it this way, with piquant spice notes piggybacking on the potent brandy back. The cardamom Armagnac Flip will introduce others to yet another brandy, a whiskey-colored French one, pairing in this case with cabernet sauvignon and laced with cardamom essence then frothed with egg yolk. The distilled wine layered with a high-tannin wine varietal tells a two-sided story of oak age.

Consider all this before any sticker shock sets in: The current list of nine cocktails costs between $12 and $17; they won’t be for everybody.

We also pay a worth-it $17 to meet a neat pour of Xicaru Pechuga Mole Mezcal, by far the most interesting mezcal I’ve ever had and a drink you won’t forget. Why? For starters, the traditional Oaxacan mezcal is made by putting chickens in the second run of the still, explains Antastacio, who joins us momentarily at our table to guide us through our sippings. Let that sink in: fucking chickens, in the still! The birds cook prior for two days in mole negro seasonings, including stone-ground chiles and chocolate. The agave hearts bear signatures of mesquite and ocote wood smoke from an earthen oven cook, then they’re fermented in pine.

The mezcal doesn’t taste like chicken exactly (Sorry, Beavis), but it tastes like the ghost of a chicken. GarciaLiley calls it “Mexican umami,” and says the flavor makes him think about cooking with his family in Michoacán; he pictures the wok-like giant skillet set over a propane burner and the aroma of grill smoke in the air. The faintness of this ghost is like diluted aromas when you’re standing near, but not too close to the grill. It’s like a lingering aftertaste of bites eaten minutes ago, a piece of chicken with charred edges, vegetal, tart chiles and aromatic spices speaking up in the seasonings. The nose is pungent at first, but mellows as you sip, and there’s a fleeting hot bite across the tongue too. Smokiness pervades in the best way. I would venture to say that if you like peaty scotches, this will be your jam. We become obsessed to pair it with food.

Benevolently, Immerse Cuisine’s serving cherrywood-smoked lamb tacos as a special (which I insist they forever keep on the menu), sauced with guajillo chile purée and lacto-fermented tomatillos cut with fresh ones; cooling yogurt garnishes. It’s a match maybe not made in heaven itself, but it’s at least consecrated in this old house of worship. It does what the best pairings do, the drink enhancing the food and vice versa — smoke dancing with a different scented smoke, chiles playing off chiles, chicken pecking lamb, cured with a lovely leathery skin like jerky that reveals a soft pink interior. We taste something like smoked salmon for a fleeting moment.

We’re inspired to try one more drink with the dish, and Anastacio recommends the Sabor (“flavor”), a dirty martini spin with Rose Rock Scottish gin meeting dry vermouth, coriander vinegar and black garlic sweat, garnished with olives stuffed with tri-pepper goat, Gorgonzola and creamy brie cheeses. He insists the coriander and black garlic will accentuate the lamb, and it does, the drink’s briney nature bringing out more gaminess in the meat. The cocktail alone holds so much interest because the layering of gin botanicals and cheese — and sweet, aged-garlic funk with the coriander herbaceousness and vinegar sharpness. Aromatics invoke leather and cigars.

It’s difficult to follow drinks and a dish like this because there’s a worry you can only go downhill from this type food and drink ecstasy. To some extent that’s true, but we at least come down gently thanks to a final cocktail and dessert pairing we make. Immerse is serving a new-to-its-menu dueling panna cotta plate, vanilla garnished in strawberry compote and chocolate set up with dark chocolate-coffee pretzel brittle. We don’t expect one drink to hit both ends of that spectrum, from fruity-light to cacao-dark, but the Sandia con Piña nearly does, an agua fresca-fresh mix of blanco tequila, Topo Chico mineral water and extra hydrating watermelon shrub with a pineapple cordial float and lovely dried pineapple wedge dusted in chile powder. All the tropical fruitiness unsurprisingly matches the vanilla panna cotta better, but the watermelon note does work harmoniously with the chocolate.

I think back to what GarciaLiley said about making odd flavor combos work and I think we can certainly surprise ourselves when we’re willing to journey and explore, maybe discover something worth repeating or even avoiding. It’s this adventurous spirit a place like the whole of Carter Payne invites, Araucana arriving as the missing piece, with outstanding spirit concoctions added to fine beer and wine offerings and good gourmet food. In its own way, that pretty much captures a “nose to tail” aspiration, with all bases covered and the great game just beginning.