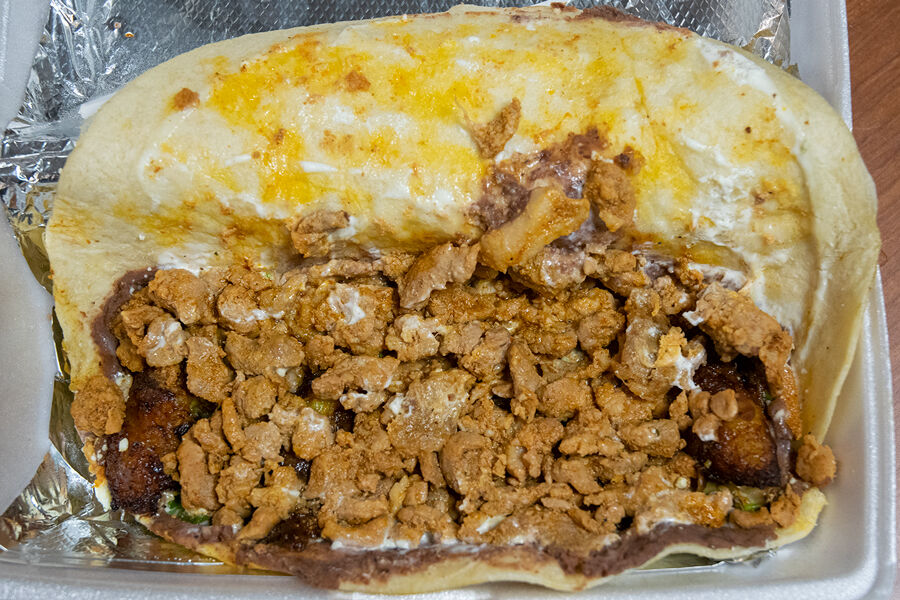 A peek under the hood of a baleada reveals pork al pastor and plantains. 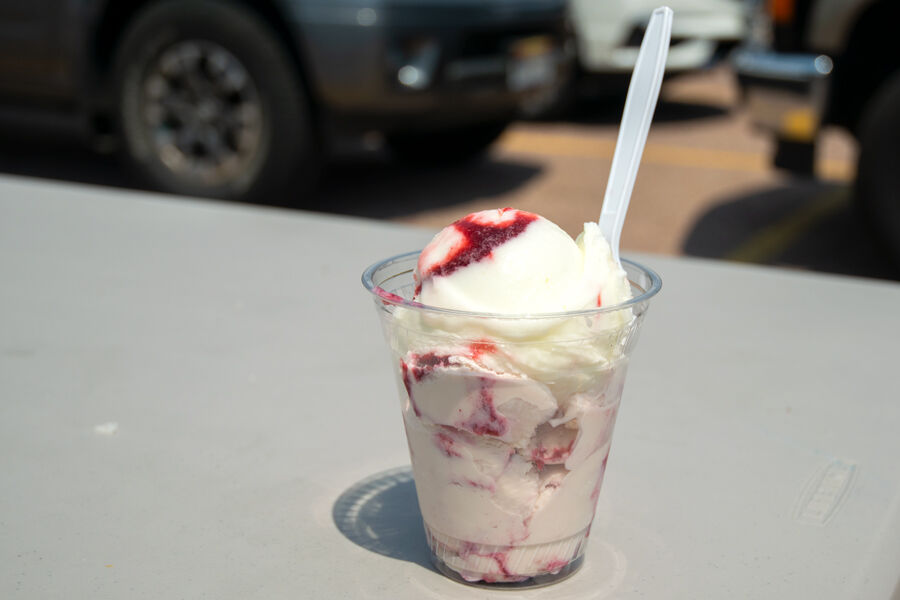 Bale Bale Bistro, a Honduran food truck, first opened in February 2021 serving authentic food. For Chef Tirza and husband Noe Perez, who own the truck, it’s about sharing a piece of family and heritage, yes, but it’s more than that. It’s all family operated, serving as a way to teach their kids about business. We’re happy they have this to anchor their family; we do wish, however, that they’d post their schedule online somewhere so we could find them, though they’re responsive by phone.

Bale Bale’s traditional baleada uses dead simple components: refried Honduran red beans, cotija cheese and Honduran sour cream, all on a tortilla folded in half. Can such a bite be screwed up? If the beans suck, sure, but they don’t, so it’s a winner. A co-worker who’s originally from Miami said they were just like the ones she would buy from a Honduran restaurant in her youth; points in favor. We dig it, but we prefer the “fancier” baleadas, like the Tropical Baleada, which has avocado and chunks of fried sweet plantain added for a little more texture and a sweet-salty interplay.

The Naughty Baleada, or baleada traviesa, adds diner’s choice of chicken, beef or pork al pastor to the Tropical Baleada and plenty of it — our choice, pork, adds a lovely chew to the soft and creamy fillings, and its achiote-spiked spice profile goes well with the sweet, salty and savory notes. It’s well into “full meal on its own” territory, far from its light-but-filling fellows. The Gringa Mix strays fully into quesadilla territory, an absolute monster of a thing full of chicken, pork and beef held in place with melted mozzarella. Every meat rates super juicy and tender, so getting through this meaty beast is an exercise in “how much of a good thing is too much?” Also worth noting, it’s served over a mass of fast food-style french fries unevenly dusted with seasoned salt, sound in quality. With those fries, we could split it and be happily full.

Bale bale Bistro offers more than just baleadas, and we’d be remiss without mentioning their taquitos. Four crispy tortillas come rolled around the same chicken as the Gringa, tender and seasoned with an achiote-balanced spice blend, then topped with spicy tomato sauce, cotija cheese, sour cream and a tangy-fresh green cabbage salad. All those veggie toppings may put a timer on any crispiness, but they make the plate much lighter than we expected, and we’re quite taken with it. Said green cabbage salad also appears when we order pupusas, offered only with chicken and cheese here. They rate sound, a little chewy after a half-hour drive but well-filled; cabbage salad on the side freshens things up, and the acidity from side salsa does wonders to cut through the heaviness.

For dessert, churro bites with Lechera — a Nestle brand that sells dairy products; this is sweetened condensed milk — rate sweet and tempting as one might expect. Bale bale’s horchata stands out, though, with a fruitiness adding to its standard cinnamon and creamy rice starch flavor notes, sweet but not too sweet. It’s a little different and, as such, special, which one could say about Bale Bale Bistro itself.