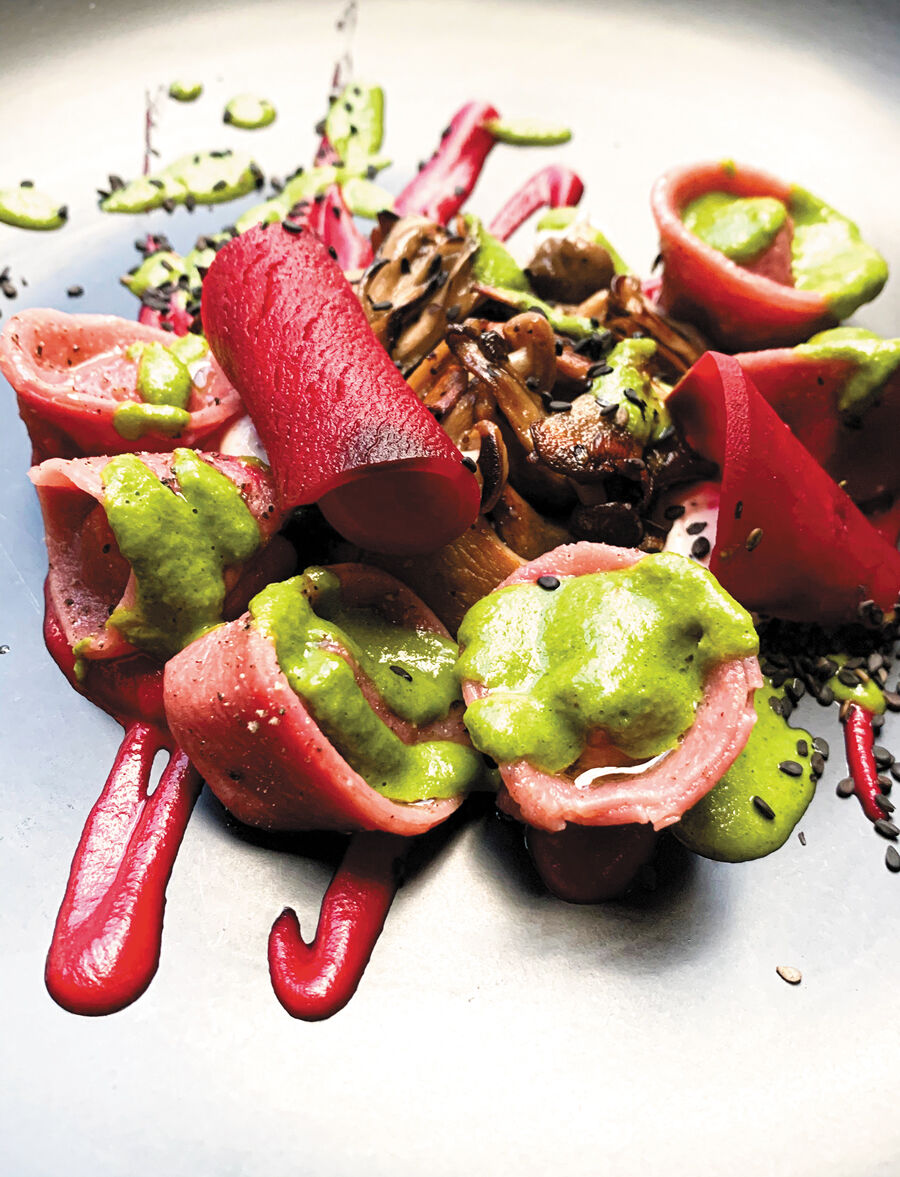 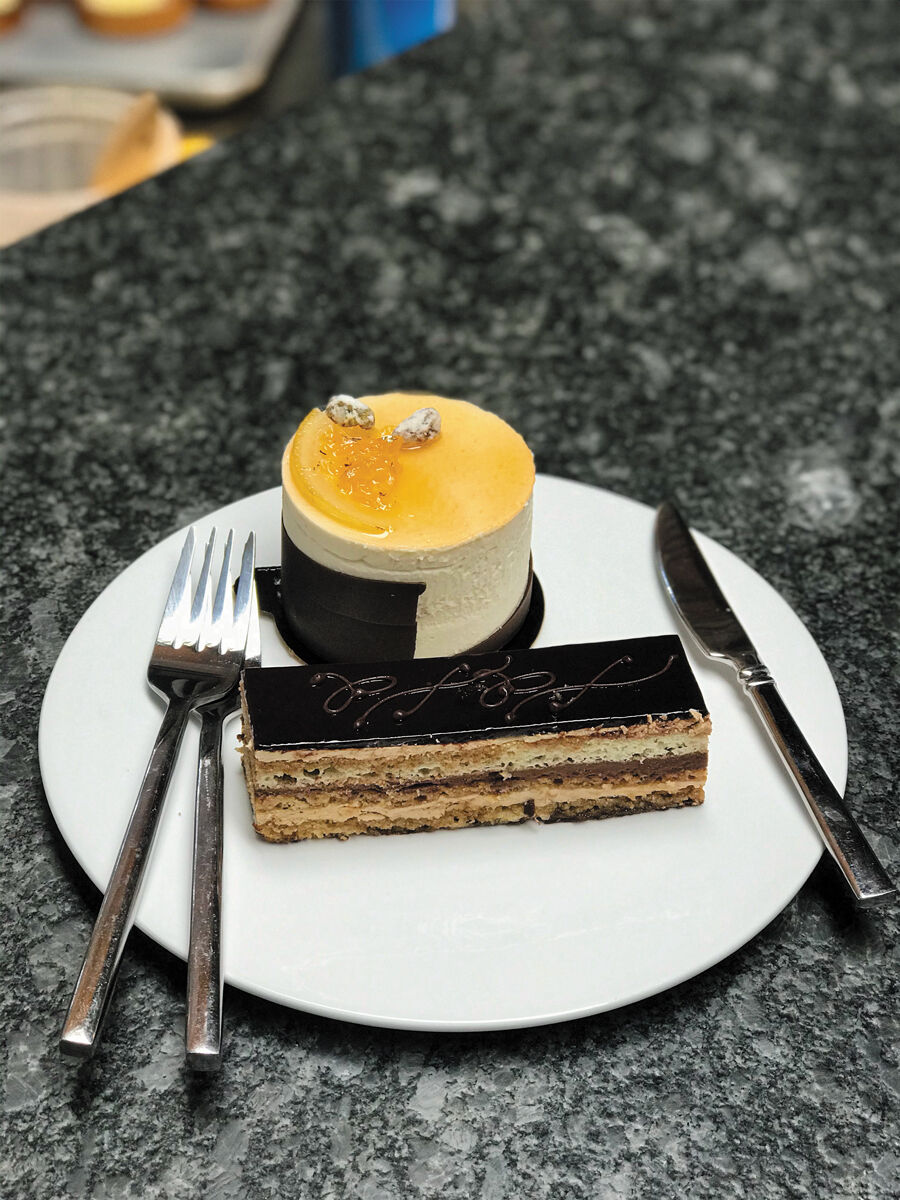 XOXO fills a niche as a gourmet dessert destination downtown. 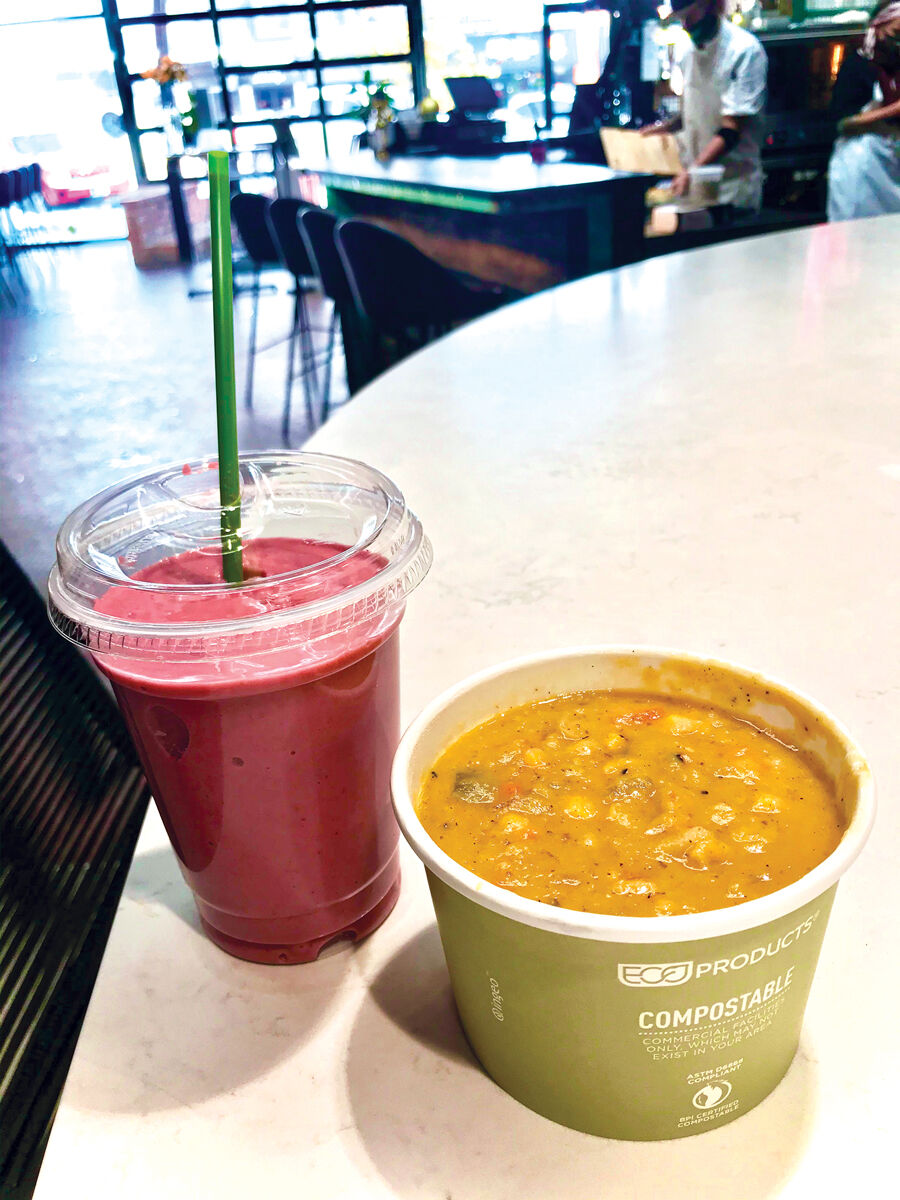 This PB&J smoothie tastes just like the real thing. 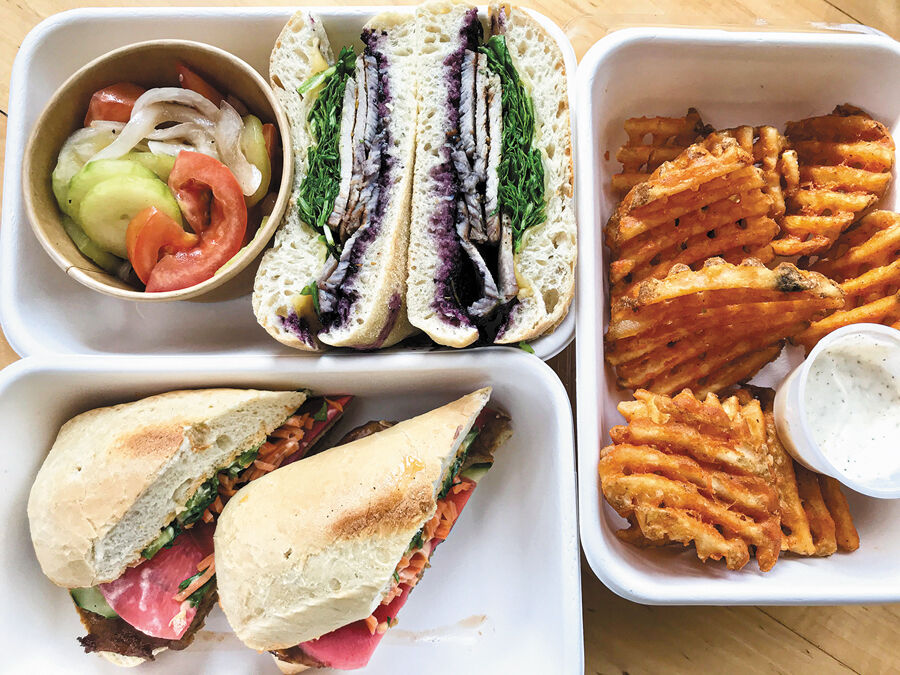 Equilibrium delivers on its promise of balanced and unique flavors.

Sister outfit to Ola Juice Bar, Two Suns skips juice service and features a more condensed menu of a couple daily specials, plus smoothies and bowls with a dozen optional superfood and adaptogen upgrades like ginseng and ashwagandha. If I’ve already lost you, you may not be granola enough for this place. I, however, am, because I’ve been incorporating items like chia seeds, turmeric and hemp seeds into my diet for a long time. (People always ask, and I say a food critic needs to eat really healthy at home to balance all the heavy meals out.)

During media preview days near opening, I’d tried and greatly enjoyed one of the bowls — like Ola’s açai bowls but instead with mixed fruit and veggie bases topped with half a dozen garnishes — so I check out the alluring PB&J smoothie. Perhaps nothing can top Ola’s awesome Thai Avocado Medjool smoothie, but this one delivers ample joy, tasting, yeah, like a PB&J; cool. Strawberries, elderberry and beets make up the bright pink color jelly element while banana and oats further fortify the peanut butter, cut with oat milk and agave sweetened for an overall velvety texture. I add imperceptible lion’s mane mushroom powder for “focus” and I’m a kid again, workin’ my jaws on that straw.

More lunch-ish, I also nab a bowl of that day’s special soup, a gluten-free, vegan, spicy corn chowder made with a starchy potato base thickened with rice flour and vegan butter and hosting bits of carrot, celery and roasted corn. The texture may evoke baby food but there’s nothing childish about the green chile dosing that gifts respectable heat to play off all the sweet. My only concern for Two Suns is how it’ll fare during evening hours when most folks are out for savory mains and booze.

Former Tapateria chef Chris Lerdall started this simple sandwich concept, and told me in an earlier interview that it pits opposite flavor combos against one another “to create unexpected, yet balanced flavors.” Case in point is my colorful blueberry pork sandwich on a blueberry sauce-stained, spongy ciabatta roll (to be Sourdough Boulangerie-sourced by the time you’re reading this, as part of menu additions). The fruit’s an obvious sweet note, with a faint tartness too, and that meets a mild gooey Gouda component, scantly peppery arugula layering and three strips of rosemary-laced, roasted pork loin brined for four hours as per a Thomas Keller recipe and re-warmed with its marinade in the pan to order. Indeed balance seems achieved as no ingredient sticks out and they meld together smoothly. It’s a likable bite and it’s obvious this is a sandwich made with quality ingredients and care compared to so many shops that just assemble commercial deli meats and call it a day.

That same consideration toward house-cooked pork, this time marinated with hoisin, soy and sambal plus honey and brown sugar for a salty-sweet glazing, informs Equilibrium’s bahn mi on a dense baguette roll. It’s pretty faithful to the French-Vietnamese classic aside from the typical American removal of pricey paté. Spicy mayo, which in tandem with jalapeño coins adds significant spiciness, coats pickled, shaved carrots and thin-sliced, pretty-in-pink watermelon radish slivers. Cucumber grants a cooling element and cilantro its complementary coriander essence for an overall fresh, crisp effect. Side waffle fries are awesome with a biting garlic aioli, and another side of balsamic vinaigrette-marinated tomatoes, cucumbers and onions smacks super Italian, tasting like some true Italian delis smell. Bonus points for the conscientious Eco-Products to-go ware, also in use at Two Suns.

At one point the Springs had a true non-ice-cream dessert spot in the form of Michelle’s, but nothing quite like it for evening sweet tooths has existed since. To be clear, XOXO isn’t its replacement, as it’s in its own way unlike anything else around. But it does check the box as a dedicated gourmet dessert destination worth passing on the dessert course in whatever other restaurant you’re at. Venture here for a nightcap of dessert wine and stunningly gorgeous, Broadmoor-caliber pastries. Chefs Erica Lee and Colby Schaffer actually met while working in the Five-Star, Five-Diamond Penrose Room, so the comparison is deserved. But XOXO is pioneering in that it’s taking that highest-quality confectionery out of the One Percent setting and delivering it to the common people — yes, still at a price. “If you can buy a $10 to $14 cocktail you can buy a dessert that took two days to make,” Schaffer says, when I ask him if they’ve already had to do some public education to explain their small sizes. “You’re paying for quality, not portion... art meets flavor meets experience,” he counters, explaining to me for example that the perfectly sharp siding to items like the Opera cake come from overnight setups in molds, but I’m also observing Lee meticulously sift flour and measure and cut layers with a pastry ruler as we talk; their entryway corner of COATI feels like a math lab as much as a sugar hub. Since we’re seated at their counter before 4 p.m. this day, we can’t access the half-dozen or so made-to-order plated sweets that I had gotten to try weeks earlier, like a fabulous pineapple upside-down cake and Key lime pie.

But we’re happy to grab from the pastry case for that Opera cake and a sensational, cylinder-shaped, chocolate-bottomed, pistachio-lemon curd, orange-infused mousse cake. I got goosebumps just writing that. With the rectangular almond cake Opera with its ornate dark ganache top, we discuss how the coffee buttercream and syrup notes are accentuated by the caramel aspect of the 15-year Madeira we’re sipping. I feel snobbish like when nerding out over third wave coffee, which is to say “blissful.” We’ve also sipped Sauternes with the mousse cake, and sampled a tiny pour of Mozart chocolate cream liqueur, which Schaffer relates symbolically to Mayan drinking chocolates, and the word “xocolatl” that informs XOXO’s name and the playful glyphs on the walls around COATI. We’re trying to break ourselves away before we spike our blood sugar too high, but a bourbon-pecan tart has just come out of the oven, with vanilla cream and an edible gold garnish, so we can’t not order one. Yeesh.

Ephemera started over two years ago as an immersive, art-driven pop-up dinner experience. Read my Feb. 25, 2020, full review for more backstory. But all you need to know now is that Ephemera’s twenty-something founding chefs (and former Four by Brother Luck and Axe and the Oak hands) Ian Dedrickson and Adam Ridens are red hot right now, turning the heads of respected older-generation chefs locally who admire their freshness and creativity. Their kitchen assembles a dream team of sorts, employing several experienced fine dining alum with deep résumés that include time at a Michelin-starred restaurant. Ephemera is COATI’s fine dining option, with seven-course tasting menus available for $60 a head (optional $30 to $60 wine pairings), though à la carte eating is welcomed.

Mezzo Bar will have opened upstairs by the time you’re reading this, but when we dined on Halloween, Ephemera still enjoyed sole run of the area, with views over the food hall’s front and rear. Creative director Jasmine Dillavou has lent some of her own vibrant artworks, along with pieces from locally beloved Cymon Padilla to adorn Ephemera’s dining room (and she’s done a hilarious job with vintage Mad and Cracked magazine covers to decorate a nearby bathroom). Tables are set with stark gray modern chairs and mismatched glass and flatware plus different-colored cloth napkins for the only pop of color until wine and food arrive. Ephemera only serves vino (a non-compete of sorts with COATI-attached Pikes Peak Brewing and the house cocktail bars), and for that they’ve employed a level-one sommelier and curated a smart bottle list and diverse enough by-the-glass selection from which we pick two excellent, affordable California wines: the Banshee Pinot Noir and Big Max Cabernet Sauvignon, each flexible enough to pick up complementary aspects of pairing across our courses to come. With dessert, we’ll also sample the rich 20-year Taylor Fladgate Tawny Port and dried-fruit-and-molasses-channeling Harltey & Gibson Pedro Ximenez sherry.

We start with a plate of caramelized brown butter Brussels sprouts and sunchokes garnished with crème fraiche and lemon zest. The sunchokes star (widely underutilized as an ingredient locally), reading a little sweet and feeling texturally like a cross between steak and shrooms. But for every bit as lavish as they alone are, we’re blown away by the maitake mushrooms that surprise us (they aren’t listed on the menu) at the center of a plate of beet purée-filled tortellini drizzled with neon-green chive emulsion and served with pickled beet shavings, dollops of labneh (strained Greek yogurt) and black sesame seed garnish. Za’atar spice adds to the Middle Eastern influence, and the word “complex” doesn’t even capture how dynamic the dish tastes, with sharp acidic edges, deep umami and layered vegetal sweetness. This may be both the prettiest and most interesting dish I’ve eaten all year.

Then comes lovingly tender charred octopus segments handled by a five-hour sous vide in pincage (basically browned mirepoix with tenderizing tomato paste) and plated under tart, semi-spicy kimchi sauce with saffron arancini (rice orbs) and toasted sourdough slices. It’s Europe meets Asia and elegant all the way. Also for $18, we find a different use of pork belly than Ephemera had been offering when they first opened in the downstairs area at COATI before the upstairs was ready. Then, it was killer pork belly sliders, while a poke bowl featured a cool, green matcha risotto. Now, the same great gooey, fatty pig layers, handled perfectly here, come over an inky berry-garlic risotto while the pig picks up huge orange notes from a brine and citrus braise with mild habanero heat and miso savoriness.

Lastly, a tiny, horchata-evoking cinnamon-citrus flan with cayenne-tequila caramel (neither spicy or boozy, just laced) arrives with several mini Tarta De Santiago pieces. That’s usually a full-sized Spanish almond cake, sliced, but here it’s interpreted as cylindrical punchouts, with marcona almond slivers and shiso leaves as garnish. That lightly astringent, grassy shiso, usually found in sushi items, is so unexpected and provocative — like, “what are you doing here?” The dessert would excel without it, but the juxtaposition its presence brings shows that next level of meticulous food exploration I’ve come to expect