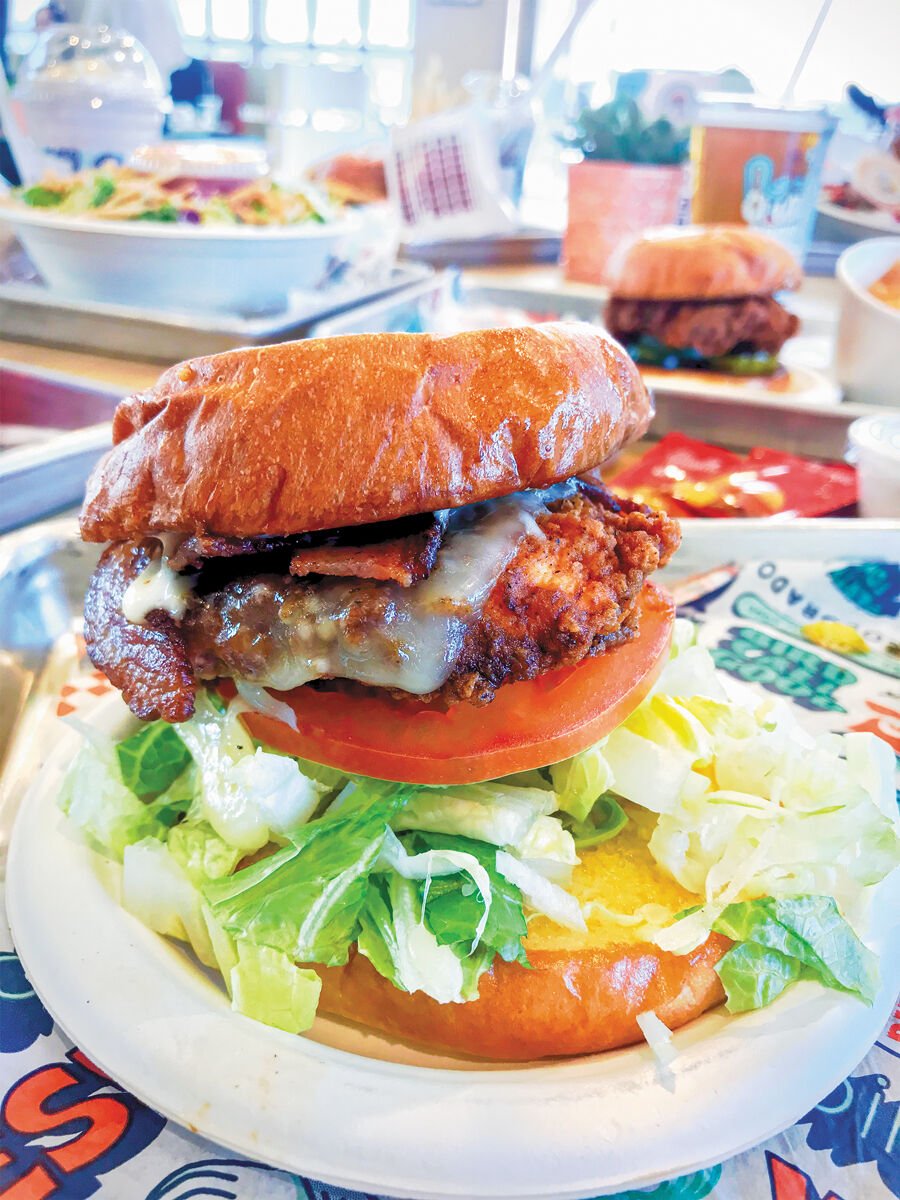 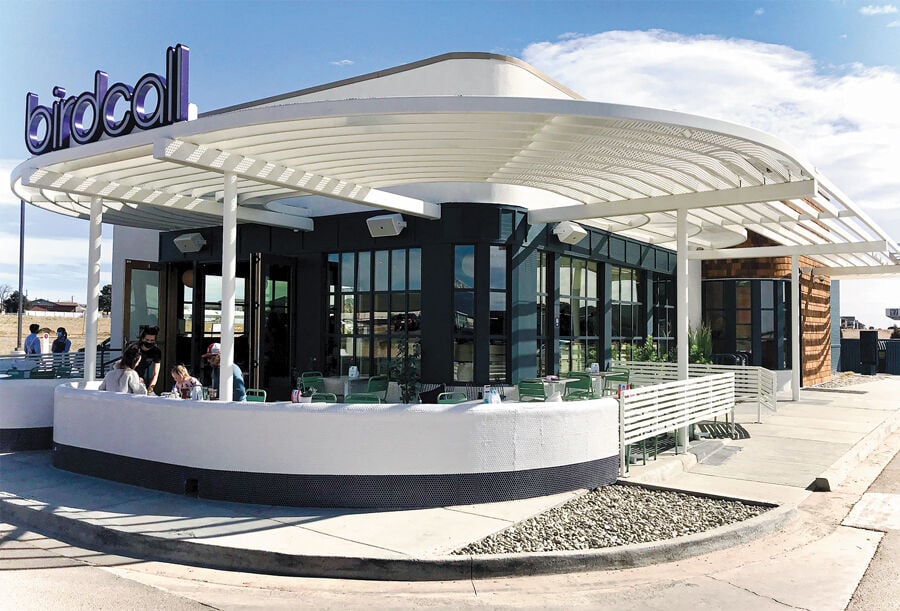 I love that Birdcall opened directly across the street from a Chick-fil-A in northeast Colorado Springs. It’s a “cluck you” throwing down of the gauntlet: We’re coming for your market share, even if just in this one neighborhood, for now. (Oh, and our food tastes better.)

Realistically, Chick-fil-A will be just fine, much as they weathered backlash from the LGBTQ community for past donation practices. But symbolically, Birdcall can at least achieve better-than status and find its niche of patrons willing to spend a few more bucks for superior products in an elevated fast-food setting. And tangibly, the growing chain can show the way forward as a social-impact business for new generations of eaters who do give many shits about what’s in their food and what impacts that has on their health and the planet.

Birdcall started in Five Points Denver in 2016, adding two more Denver spots before opening this Springs location on March 22. Another Denver, plus a Boulder and two Arizona locations will be in play by fall/winter. During a media preview, when I spoke with COO Anthony Valletta (who worked in San Francisco for Michelin-starred chef Michael Mina prior), he said they might launch up to a dozen more stores in 2022. While they won’t be local for long, he says they aim to establish local contacts in each market to source seasonally available produce and staple ingredients (like Denver’s Aspen Bakery buns, here) to perpetuate that ethos and tie each spot to its own community.

They serve all-natural ingredients (meeting standards to operate inside Whole Foods stores, as they do at their Union Station location); give 1-percent back (to nonprofits, etc.; $50,000 to date plus 200,000-plus meals to pandemic frontline workers); and operate with a zero-waste model. And they lead with style, hiring muralists to personalize each location (Denver-area’s The Worst Crew, Jaime Molina and Pedro Barrios, painted the Springs shop).

They hired a prestigious Austin-based architecture firm to design our location, creating a striking, rounded patio with white-tiled patio benches complete with throw pillows. Throw pillows! At a damn fast food spot. Try not to spill ketchup on them. Oh and that ketchup, by the way, isn’t the typical commercial dreck; it’s freakin’ Sir Kensington’s brand. If you need to wash that off your fingers, use the luxury-brand Niven Morgan green tea-peony hand soap in the ornate bathroom misplaced from a four-star hotel. It’s all almost too much; just stop it guys … we get it, you’re hip, now cluck off and let’s get to eatin’.

Because of Birdcall’s popularity, accessing it proves the only major meal challenge. Cars file into a long to-go line, leaving open only a narrow oncoming driveway of traffic where you may face off with a vehicle departing neighboring Starbucks. There’s an attendant stationed outside who’ll direct dine-in customers to parking spots with “curbside” numbers at each one, which confuses for a moment if you do plan to head in.

Inside, you place your order on a touchscreen monitor (you can reorder with a QR code from the table), then watch another digital display above the cubby-hole-like pickup bays located next to the self-serve soda fountains. The waits aren’t long — these birds fly.

Regarding those sodas, they’re organic Tractor-brand drinks with fun flavors like blood orange, coconut, and lemongrass. Even the sweet-tooth kid with us says they’re too sweet, but hey, at least it’s not high fructose corn syrup. And since this is a fast food place with alcohol options — how cool is that, parents? — get an organic wine pour or fine IPA made exclusively for Birdcall by Breckenridge Brewery, or a housemade cocktail for $8.

Each cocktail features its own glassware: a neat stemless wide goblet for the not-too-spicy, agave-sweetened mango-habanero margarita; a honeypot-invoking hive-shaped glass with stir stick for the Ezra Brooks Bourbon-made Honeybee, with lime and orange juices, bitters and honey (our favorite sip); and a hilariously cool, bird-shaped glass with only an opening at the tail end — as if you’re drinking from a mini wine decanter of sorts — which holds the simple vodka and vermouth watermelon-juice cooler. Save the organic Boulder Ice Cream-made shakes for dessert. The peanut butter chocolate cookie dough is the obvious choice of six flavors, and you can add hooch for an upcharge. (Though I’ll say Bingo Burger’s boozy shakes still reign supreme.)

Rather than spend time detailing salads and sides we tried, I’d rather blanket sum them up as just fine and plenty serviceable, with ample healthier options. For example, there’s a cup of garlic-lemon seasoned, chopped Brussels sprouts with pine nuts, cranberries and pungent pecorino cheese. Birdcall’s tater tots are enjoyable and the fries fulfilling. But none of that will compel me to drive 20 minutes from my home to eat here. Only the chicken will do that: It’s superlative, the best I’ve had in this style of application.

Just as I’m not really a wing guy, I’ve never much said the word “tendies” without meme-generated sarcasm, but Birdcall’s chicken strips kick ass, and the 10 available sauce dips rate uniformly bright with robust flavorings. I can’t choose a favorite, but the Bird-B-Q-Ranch and buffalo are up there. Before I talk about the starring sandwiches, of note is the process the chicken here goes through to obtain its crunchy jacket and incomparably moist interior.

Valletta toured us through the kitchen during opening and we watched an army of employees press and fry orders — observing the dedicated deep fryers to assure gluten-free eaters. He was transparent about the pricey cooking oils they use, meticulously maintained and cycled through to ensure even cooking and no off flavors. And he talked about 24-hour tenderized and marinated meat, treated with a food science substance called Actobind (that he insists meets the “all natural” factor) which helps retain the juiciness.

As satisfying as all the variants are, we surmise you can’t beat the Original sandwich for $5.95, appointed only with Littleton-made Tru dill pickle slices that gift snap and acidity and let the phenomenal crispy chicken speak for itself. If anything bests it, it’s the Nashville Hot sandwich for a buck more, which gets sweet butter pickles and an option of being made double-hot. I’m a spice head, and try it both ways between visits, adoring every bite as a slow smolder builds across my palate but never crescendos into too-much territory. It offers a beautiful burn and I woke up the following days thinking about this sandwich. (I have many things to do and ponder in my life and don’t often do this.)

The Deluxe sees bacon, pepper jack, tomato, lettuce and a buttermilk-herb mayo, essentially making for a Club or BLT, fresh with the fixings and laced with a little smoke and fire essence. And the Rancher gets white cheddar, the aforementioned Bird-B-Q sauce and a bacon red onion “jam” that’s not so much a jelly but more of a sweet-edged, sautéed hash. When I say I want to return to try what we missed — a pimento-spread Southern; grilled chicken Caesar; buffalo blue cheese; and vegetarian tofu, peanut slaw, cilantro and sriracha aioli sandwich — I truly mean I aim to do so.

When talking “stickiness” in the marketing/branding sense, Birdcall resonates in a clever way: It calls attention to itself aesthetically, with uniform style, and it creates a call-back by way of cravings. It’s that clucking good. Chick-fil-A may have had your number before, but Birdcall’s gonna quickly earn its way to your speed dial. 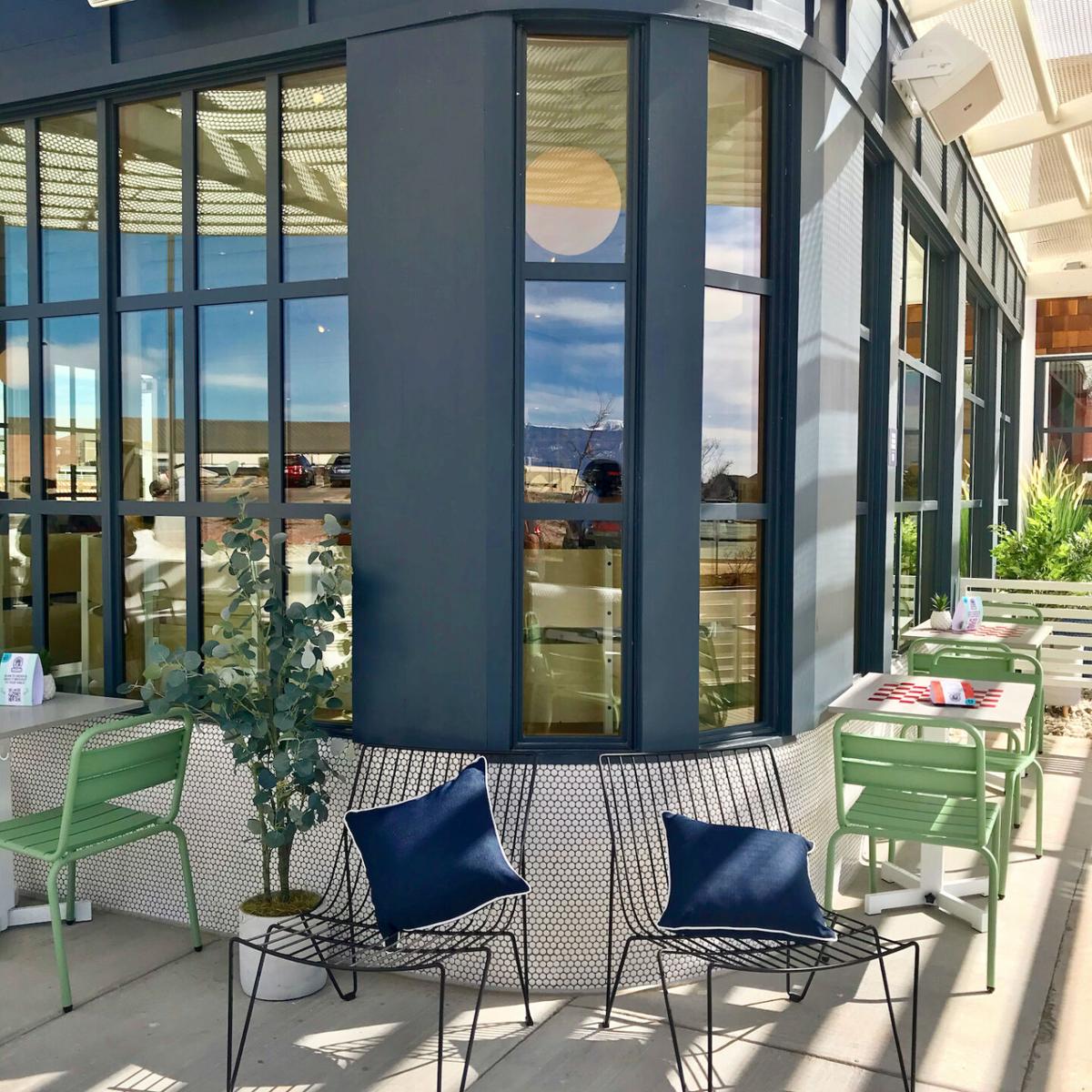 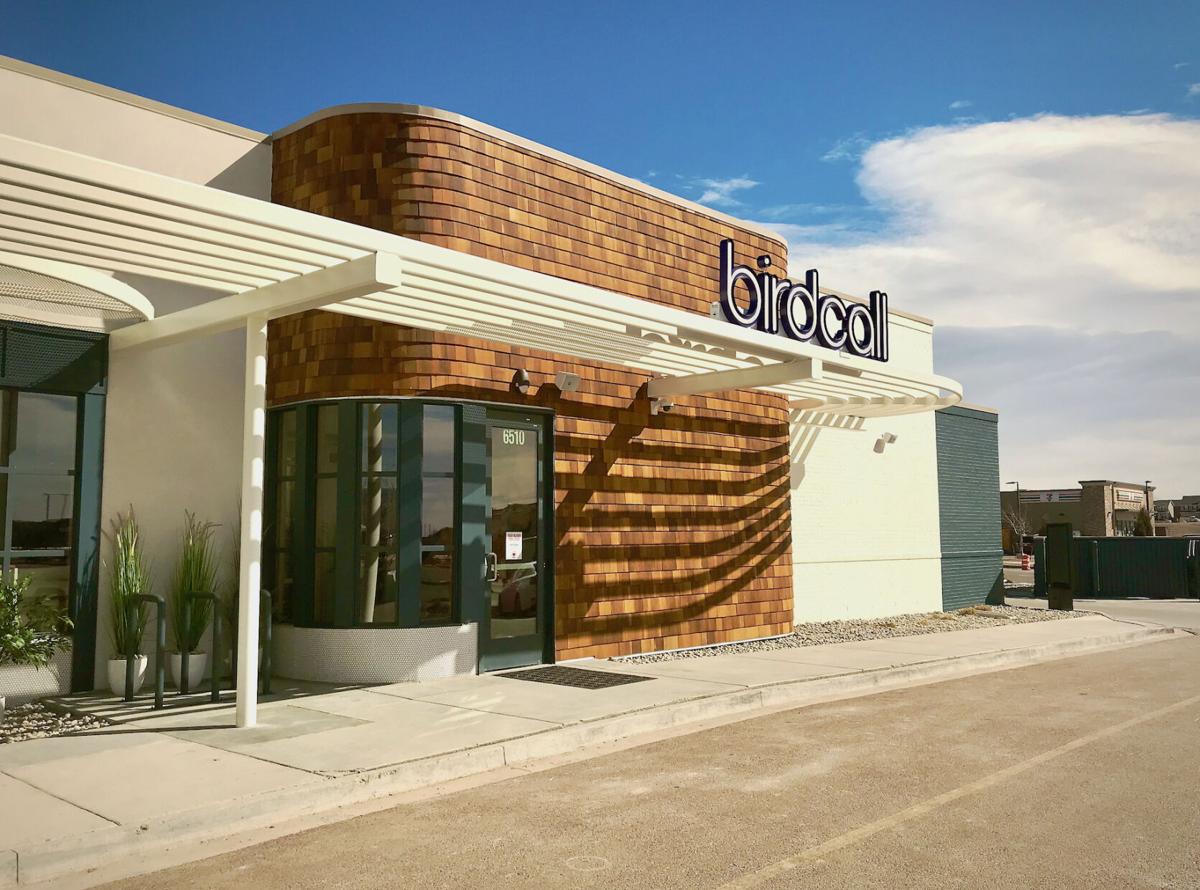 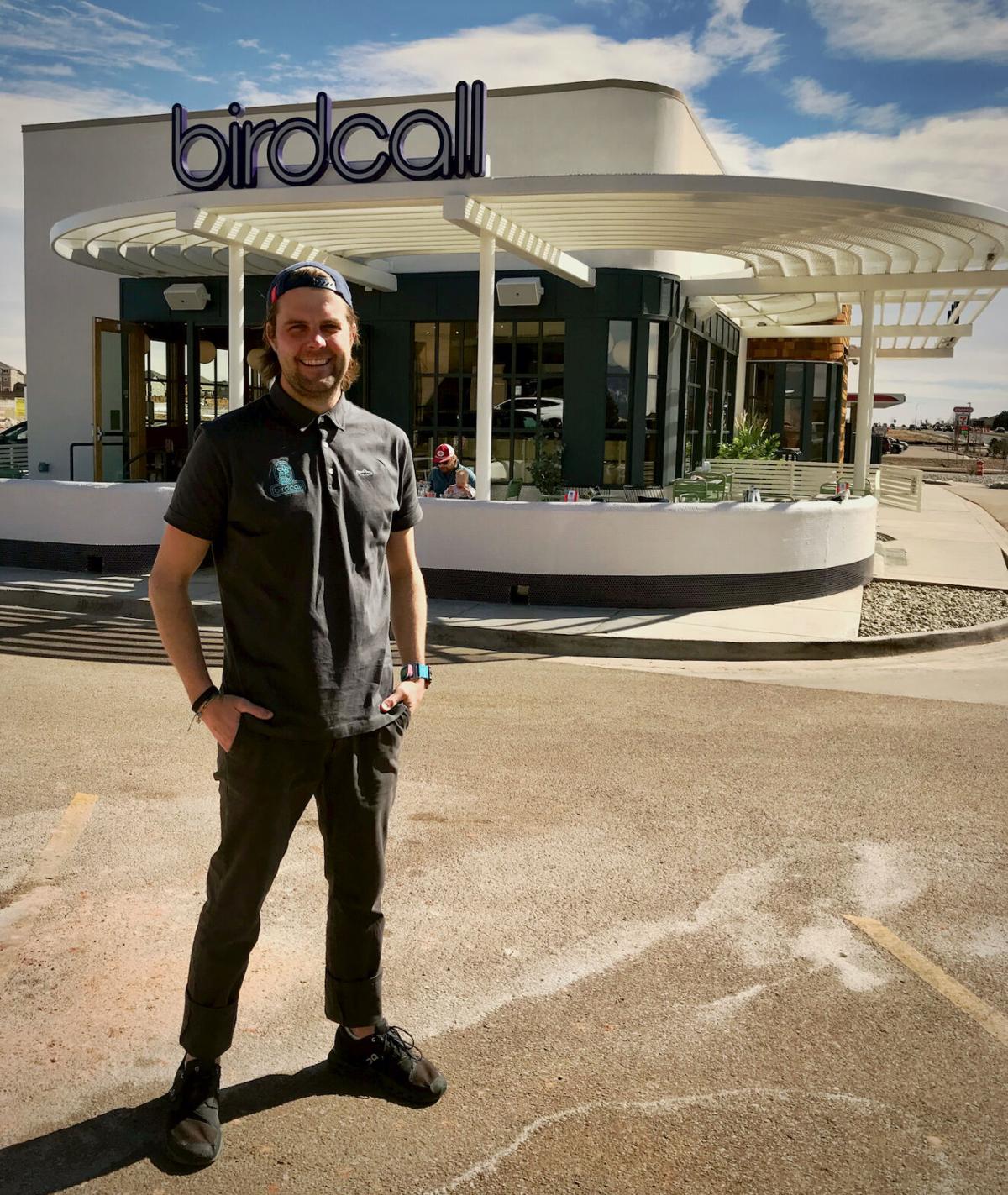 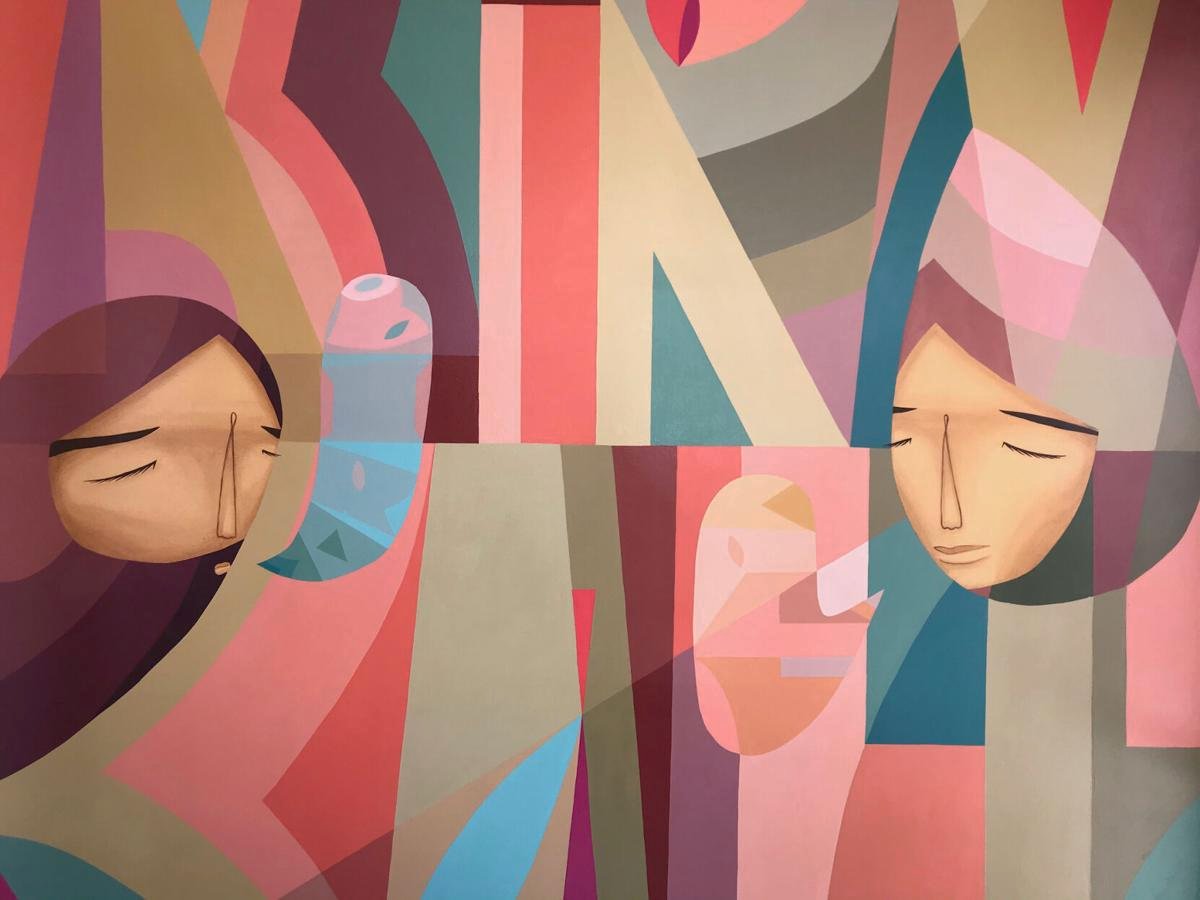 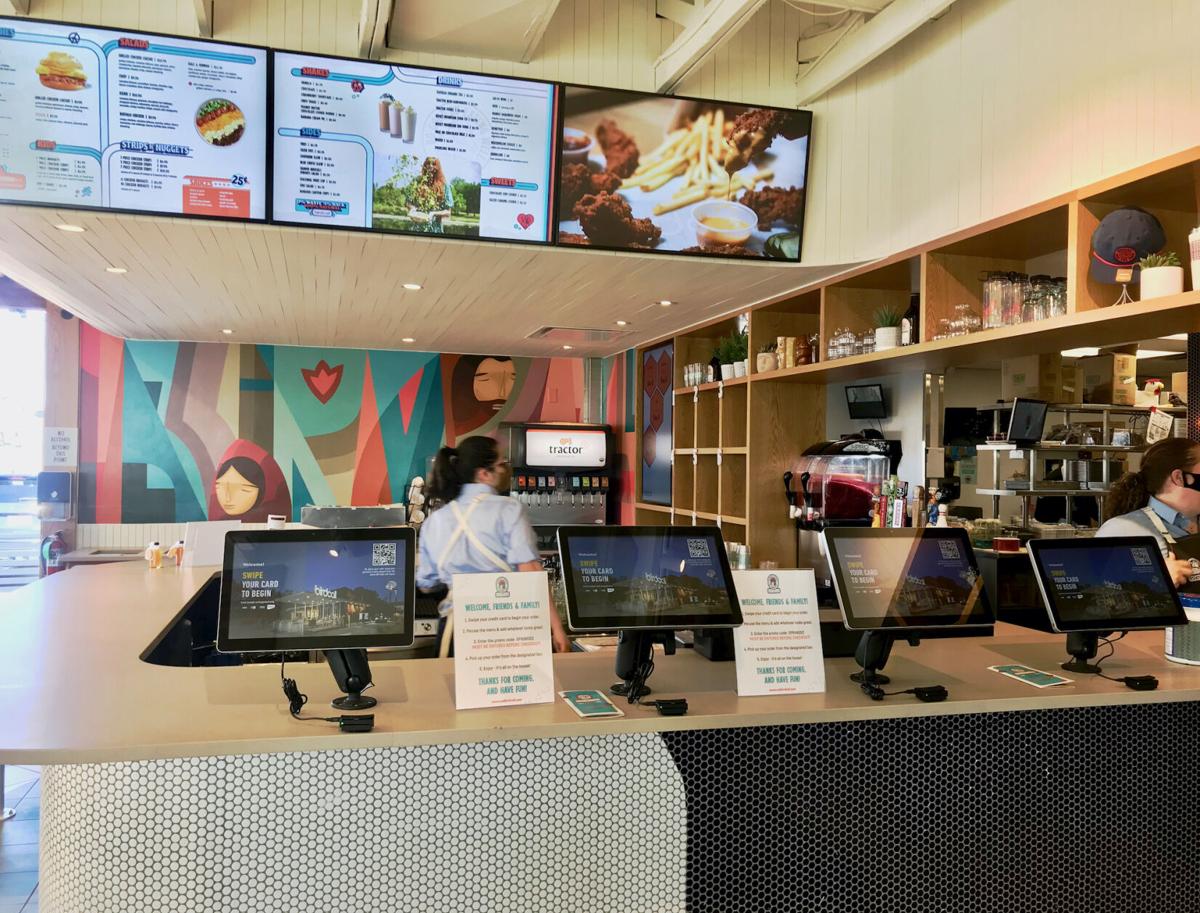 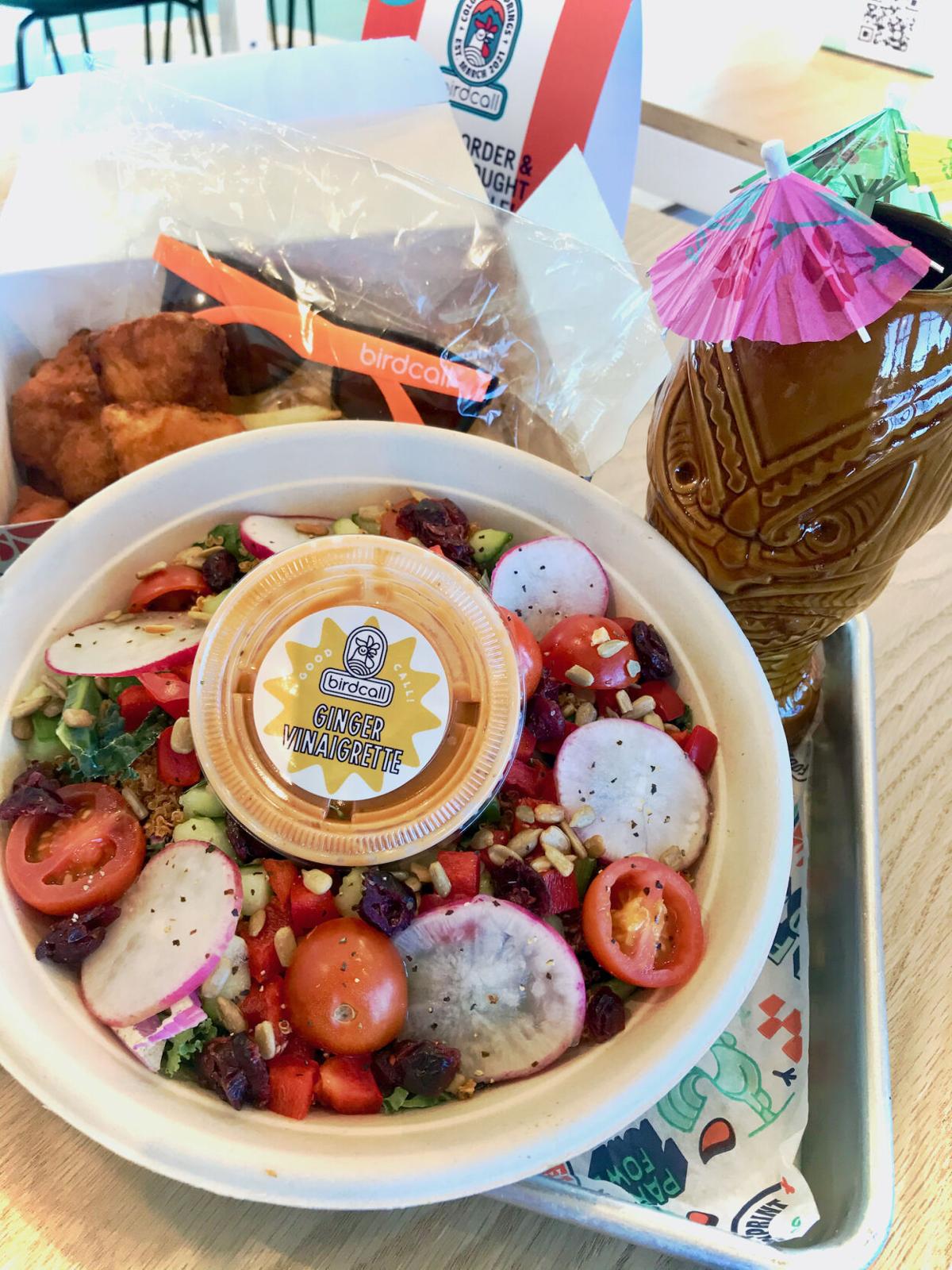 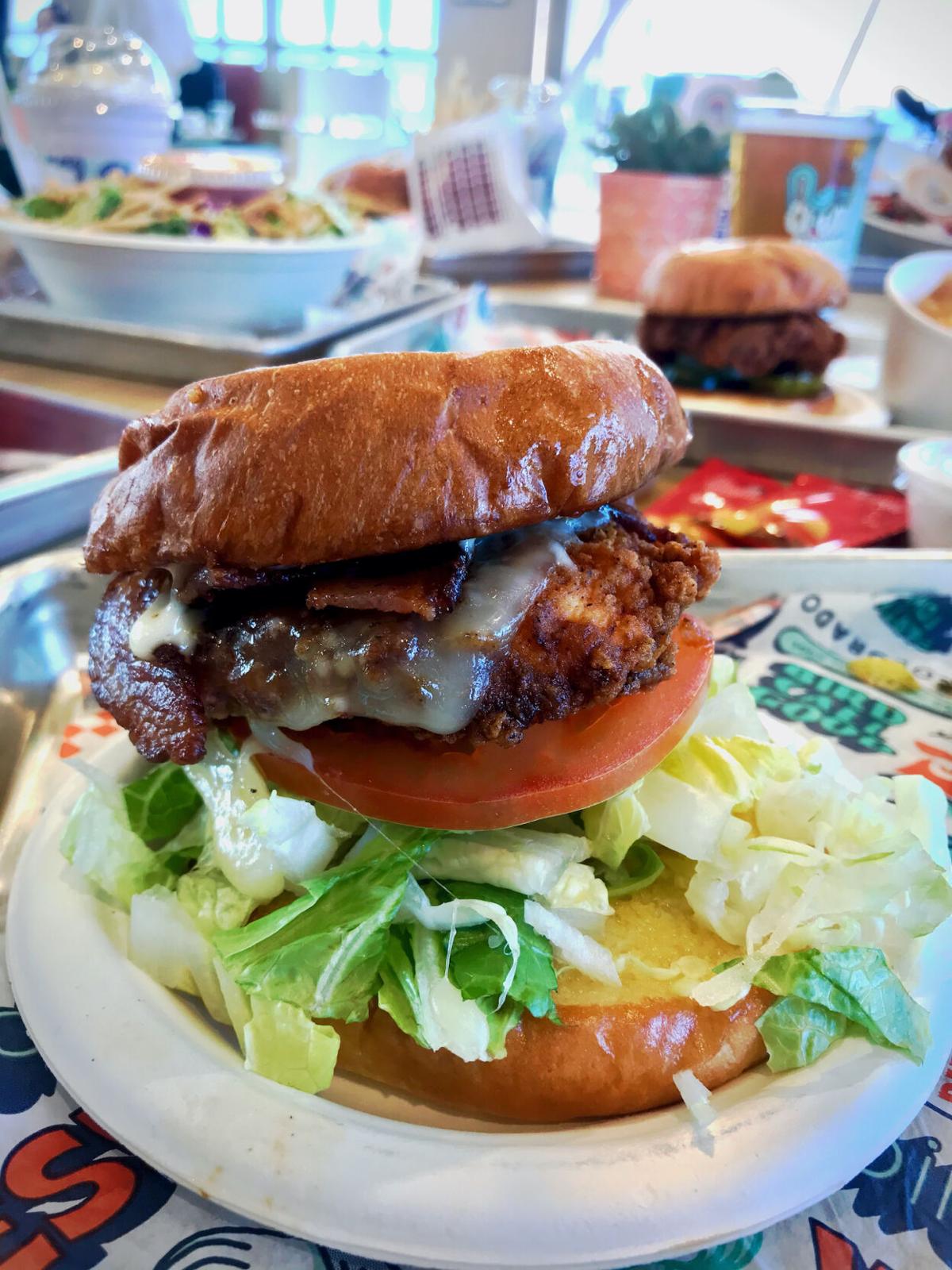 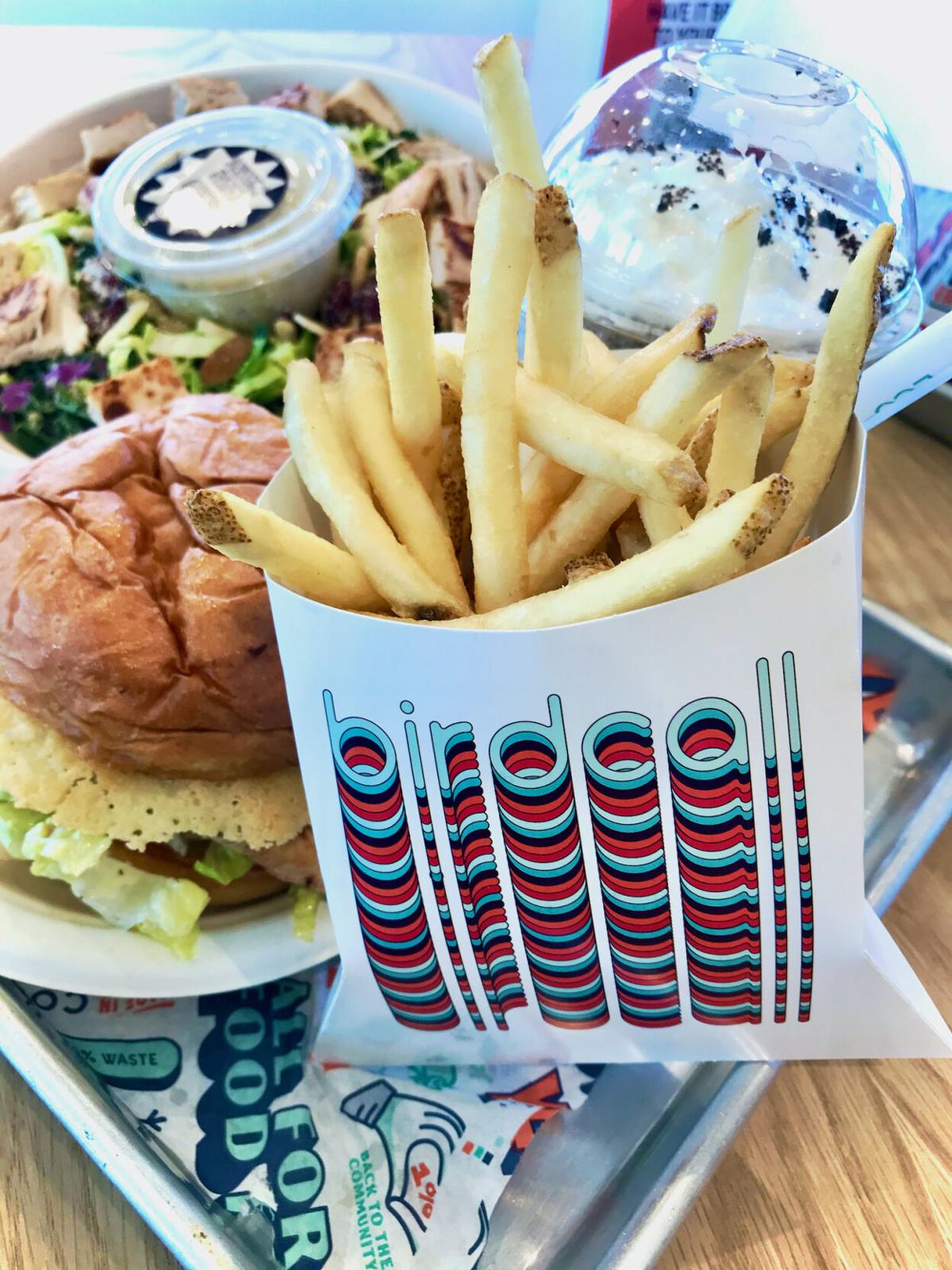