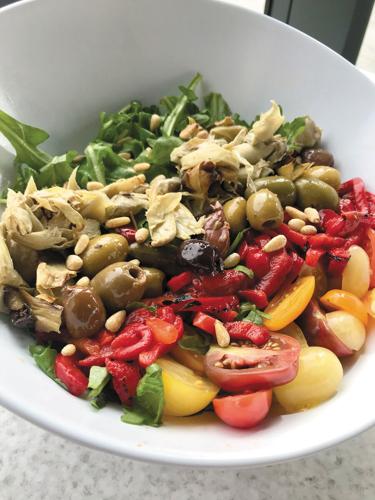 Our arugula salad pops with color, though some flavors get lost in each other. 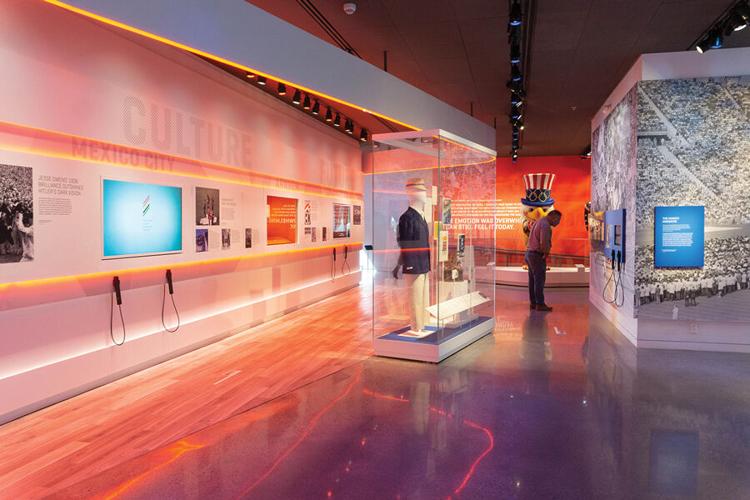 In all its digital glory, the museum does inspire some introspection. 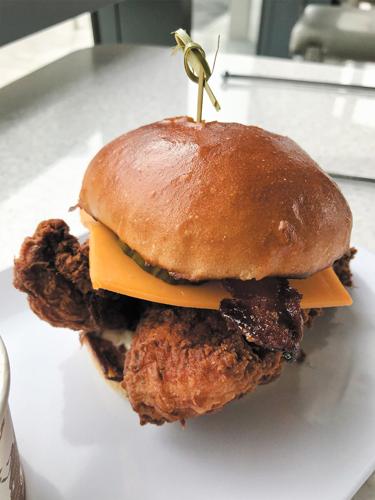 A fried chicken sandwich stands out from the rest of the Flame menu.

Like it or not, or whether you care at all, you live in Olympic City USA.

All that feels like a lot to live up to, like we should all stop sucking in our respective ways (probably put down our pre-rolls) and go be awesome somehow to contribute more. I almost feel some internal pressure to play it extra cool as I make a visit to that newly opened U.S. Olympic and Paralympic Museum, the striking pointy and curvy structure covered in giant silver scales that resemble salmon skin, which now dominates downtown’s horizon like the Frederic C. Hamilton Building at the Denver Art Museum has so stylishly graced Denver’s over the last 15 years.

Inarguably this Olympic tribute wows as a structure. An August 2020 Architectural Record article cites Pikes Peak as the inspiration for our $91 million building, designed by New York firm Diller Scofidio + Renfro. “It’s a constant reminder that you’re in this breathtaking, Olympic-class setting,” one of DS+R’s reps says. But as a Los Angeles Times critic offered back in the day with regard to the DAM addition, “[it’s] a stunning piece of architectural sculpture,” but “a pretty terrible place for showing and looking at art.”

There’s different intent at work here — sports memorabilia and history, not fine art — so I cite that only as food for thought when you visit these expansive, winding galleries that drop visitors from floor three to ground level in a long spiral of accessible ramps. The museum’s interactive technology (you even email yourself from your visit via a “digital locker”) seems to get the same reverence as the materials it’s meant to highlight. For something so devoted to capturing the pinnacle of human achievement there’s a certain mechanical coldness to the hyper-digitized experience. (I also struggle not to laugh when finding one athlete’s Scrunchie on dignified display; the torches and medals impress more, as do the moving paralympic elements and displays that address social justice issues highlighted in modern history by the great games.)

But I’m not really here as an architecture or museum critic (or to critique special districts and downtown development as it pertains to our city’s Olympic vision). I’m primarily visiting as a food critic, touring the museum prior to my lunch at its attached Flame Café so I can fully appreciate its context, which conversely and inevitably does lend itself to a commentary on the broader space. I quickly see the café for what it truly is: the concession and catering arm of a mega-museum, also open to the public without a museum ticket. The food doesn’t have to medal, and how can it when trying to hit a realistic price point for museum guests and the wider public? But it certainly brings home a respectable silver or bronze, better than captive-audience fare so common to eras past at major attractions.

The agency that oversees culinary operations at Cheyenne Mountain Zoo, Service Systems Associates, operates Flame Café. Look no further than chef Beau Green’s work at the zoo to view SSA’s legitimacy in making quality food appropriate to its setting, and limitations. SSA tapped chef Nick Estell for this Olympic effort. Most recently he cooked for the History Colorado Center in Denver, but the Kansas City native and graduate of Le Cordon Bleu College of Culinary Arts-Pasadena holds a pretty deep résumé of fine-dining places around the country. In chatting with an industry contact who knows Estell’s work, he sounds capable of much more, perhaps overqualified, but limited here not only by this museum’s modest checklist, but by launching during the pandemic, which has almost all restaurant entities in some form of financial and existential crisis.

Indeed Flame sits nearly empty on a Saturday afternoon when it should otherwise be hoppin’. Sun floods in through the southwest-facing walls of glass, which grant a stark view of the main museum across the way, past concrete ramps and amphitheater seating, which gives it all a more brutalist feeling from this angle. We use a touch-screen system to order and pay (wishing there were an option to add a gratuity), taking a table number for staff delivery. A pint of always-good Pikes Peak Brewing IPA sets us back $8 (OK, so there’s some captive-audience pricing) while a plastic wine glass of Dreaming Tree Crush, a Northern California coastal blend usually retailing around $12 a bottle, seems more on point if just serviceable at $7.

Adult food options (there’s also a short $8 kids list) range from $12 to $15, which feels reasonable enough for daytime museum pricing. With goalposts of pizzas, salads and sandwiches, Estell has done what he can to make them flavorful if they must be common, like Chicken Caesars and Turkey Clubs and Margherita pies. Our arugula salad pops with a mound of color against the gray dining room. Roasted red bells, artichoke hearts and olives present a trifecta of brine with heirloom cherry tomatoes and red wine vinaigrette adding further acidity to all but bury the greens’ natural pepperiness. Still, it’s light and a nice pairing with pine nut garnish playing an ideal connector to the flavors of our Baby Artichoke pizza, redundant for us with the artichokes and some red bell flecks subbing in for listed cremini mushrooms. Otherwise the dish heads Mediterranean with bright and generous pesto, sun-dried tomatoes and fresh mozzarella slices. It makes for a totally enjoyable pie, cooked in a snazzy gas-fed oven atop a wood block, with house dough yielding a thin, blond crust with a crackery crunch at its edges.

We’re most impressed with, and would consider returning just for Estell’s fried chicken sandwich, presenting perfectly juicy and battered tenders under cheddar, snappy house pickle slices and kick-ass sriracha candied bacon that tastes like sweet smoke. A toasted brioche bun slapped with a little herb aioli plus a zesty side of excellent potato salad takes it home for the win, and I think this would play on menus back home in the South like a superstar. I mean, I’m talking about a $15 sandwich inside a $91 million museum, let’s remember, but for what and where it is, I’m pleased as H-E--double-Olympic-hockey-sticks.

It’s hard to imagine downtown’s business-lunch crowd making the walk or bike (or let’s be honest, drive) over to support the Flame Café as townies have supported the Colorado Springs Fine Arts Center’s revolving cafés over the years. I worry it’ll just serve museum-goers, with perhaps a prop-up from its catering division. At present, COVID remains the curveball that’s detracted from the opening this monumental effort deserved. We’re living in a world that discourages crowds when throngs of money-spenders are precisely what this effort needs. (We distanced ourselves from others with ease and the whole spacious edifice lends itself well to safe practices.)

It’s ultimately unfair to rate the Flame Café as if it must captivate guests at each turn as the main museum should. That’s unnecessary pressure. Just know that if you’re planning a day at the museum and don’t want to take the few blocks’ journey into downtown’s restaurant rows, you can budget time pre- or post-tour for a wholly decent bite here. I’m not saying this exalted snack bar makes a strong enough case to do so from our limited sampling, beyond that chicken sandwich. It’s more realistically suited for tourists, and the view remains the star attraction. As the town marketers would have us believe, it’s both an exquisite outward view over architectural achievement and distant natural landscape, but also an inward look at ourselves, as privileged champions by default, living in Colorado Springs.

I tried to conclude this article above, but I realized I’m not merely writing a food review after all. My biggest museum takeaway, and why the social justice exhibits and Olympic politics displays impacted me most: For us to be honest in our introspection, we need to call out the remaining aspects of BS. While it’s great to see a thorough honoring of the 1972 Munich Massacre, the recent #MeToo movement’s barely touched, and unless we missed something deep in the digital vault, we don’t find any mention of Larry Nassar and more recent stains on the Olympic brand we’ve so closely tied our city to.

It’s time we question our “champions” narrative, which feels like pom-pom waving, “we’re so great” nationalism. At its most transparent, the museum seems only to depict the U.S. Olympic body when it finds its way to the right side of history, not condemn itself when it obviously hasn’t. For example, it pays deserved attention to Black athletes Tommie Smith and John Carlos raising black-gloved fists on the podium in 1968 in Mexico City as a human rights statement, earning them expulsion from the games. But rather than overtly saying “we got it wrong,” they simply note how Smith and Carlos were finally inducted into the U.S. Olympic and Paralympic Hall of Fame in 2019. That happened here in Colorado Springs, going largely underreported and undercelebrated. Remember, this was the same year the country was still arguing about kneeling NFL players attempting to make essentially the same statement Smith and Carlos made. We’ve witnessed everything and learned nothing.

I guess in the end the U.S. Olympic and Paralympic Museum proved highly effective in making me contemplate human achievement, but not in just a 29-feet-2-and-a-half-inch long-jump kind of way. It seems only proper to weigh a monument that cost an exorbitant amount of money — one that may be a great visual treat, tourism driver and educational display — against the fact that it comes into existence when a quarter of our town remains underserved and subject to the impacts of perpetual institutional racism. That’s not the Olympic leadership’s sole responsibility of course, but combating systemic inequities should be a priority for a city self-branded as Olympic City USA. The Olympics are about overcoming obstacles to be one’s absolute best; it’s time our city does just that to fully earn its motto.