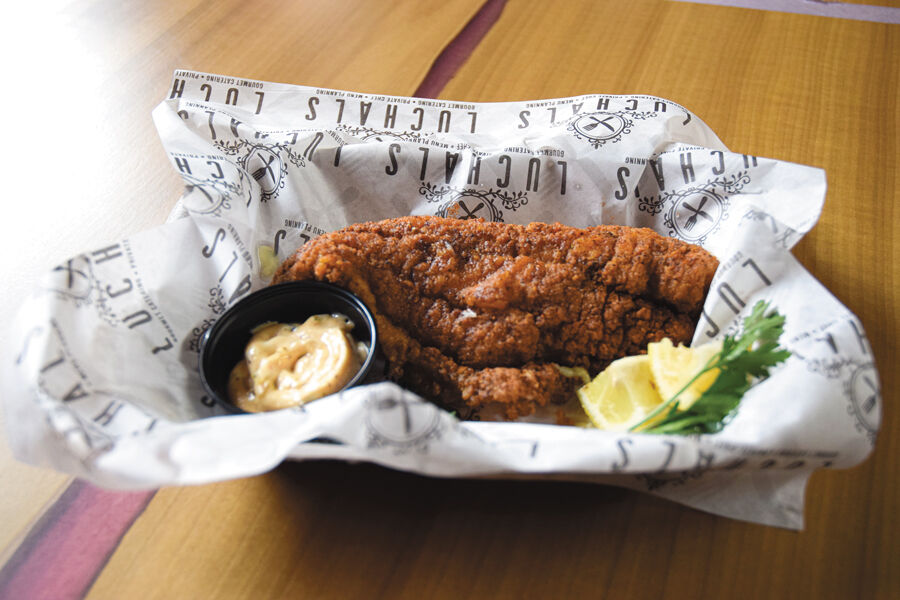 Luchal’s catfish comes with “pink sauce” and without essence of bottom feeder. 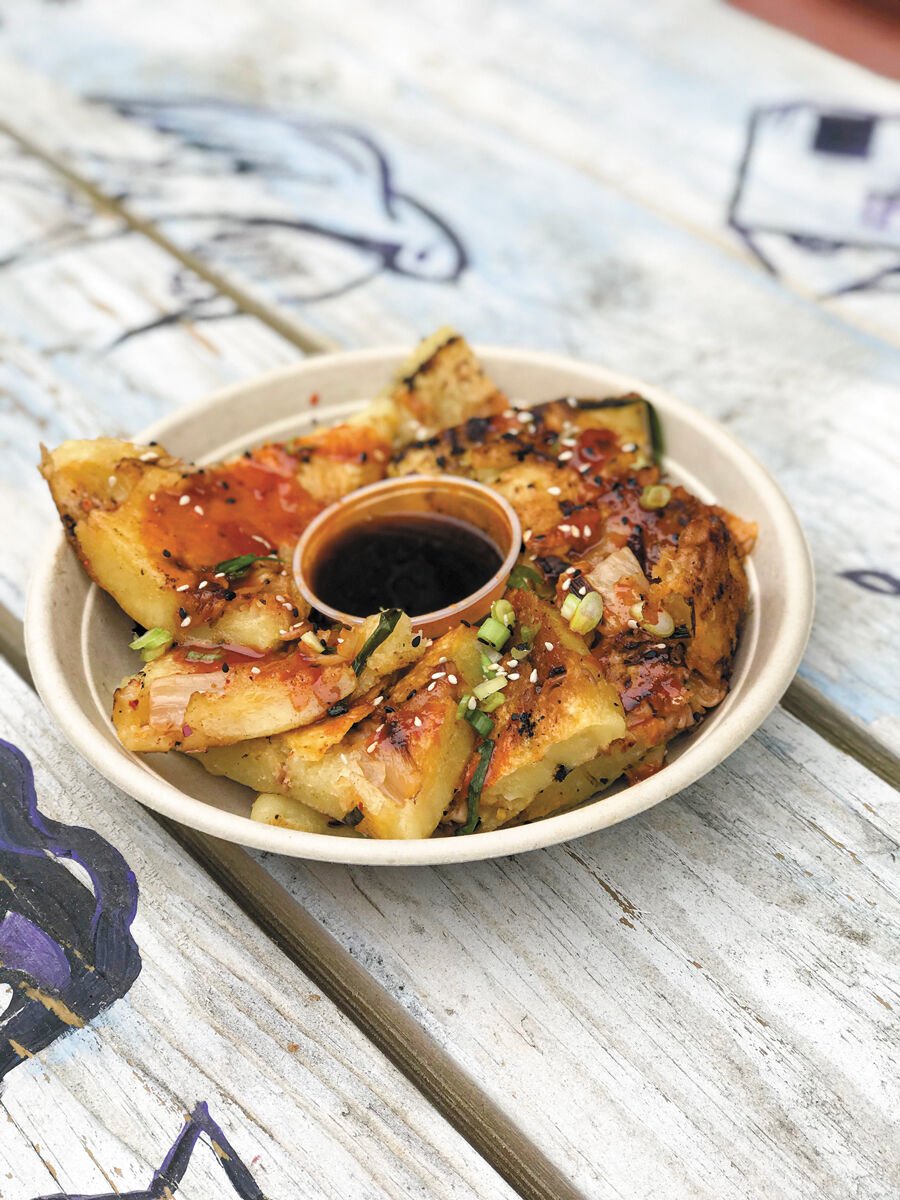 Anju’s shrimp- and octopus-laden seafood pancakes rated best among the dishes we sampled. 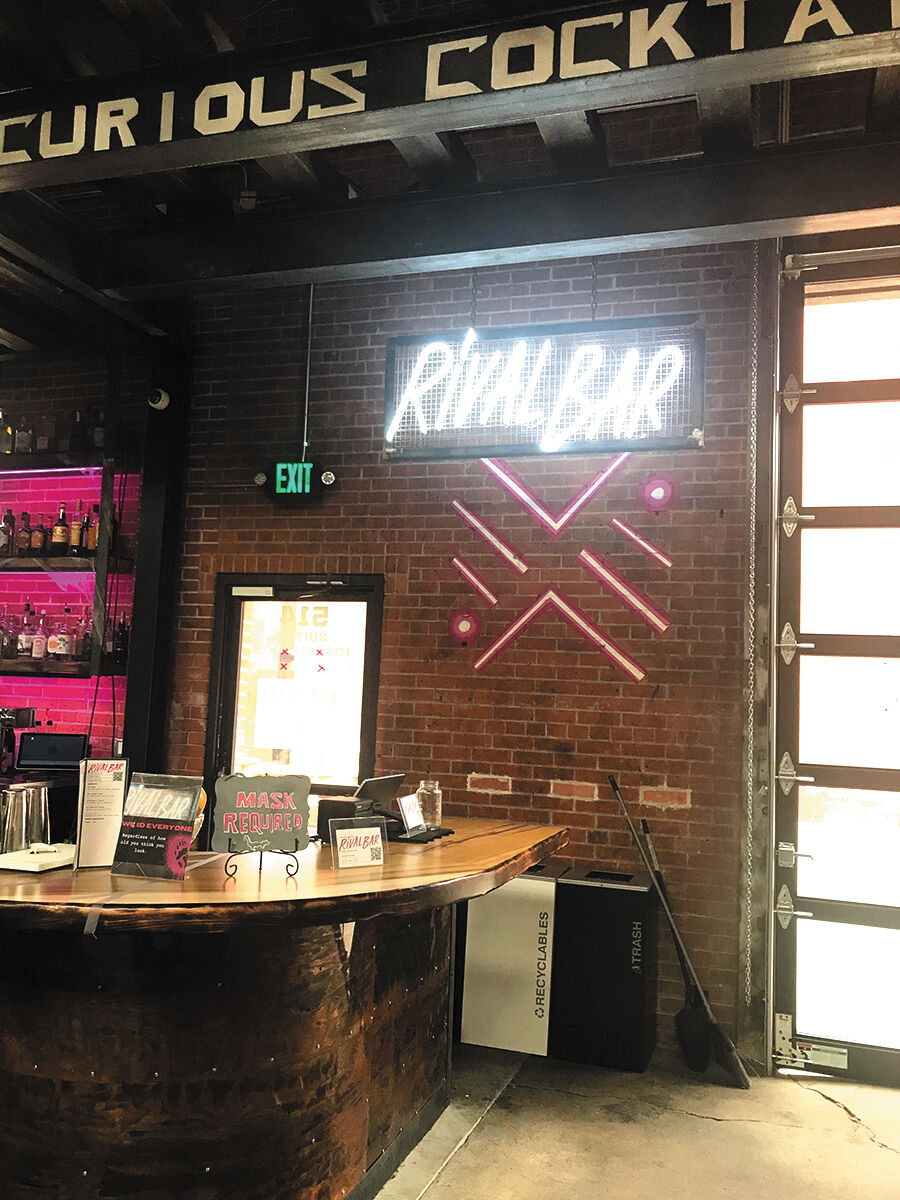 Rival Bar delivers “a hell of a drink.”

For years, foodies in the Springs have envied Denver’s food halls while witnessing a few false starts and projects locally that never coalesced or lived up to expectations. But now, thanks to a team of people including Atlas Restaurant Group owner Aaron Ewton, Pikes Peak Brewing founder Chris Wright, and Joe Niebur and Troy Coats of Niebur Development, the city has COATI. Located in the historic Colorado automatic trolley interchange building in south downtown, it hosts bars, a sit-down dining concept and a smattering of vendors selling everything from Texas Creole cuisine to high-end entremets to health foods.

It’s so bountiful that we’ve split our review across two Indy issues, each examining four of the concepts therein. Here’s our first batch:

Located at the rear of the building, Rival Bar currently serves as the watering hole for the whole space, though we’re told to expect another concept upstairs soon. But whatever’s coming, COATI diners can already get a hell of a drink. We start with The Eight Kings, which uses a spirit called rhum agricole that’s made from sugar cane juice, like cachaça. Here, it meets rum, angostura bitters, lime juice, creme de cacao, absinthe, and an almond-based heavy simple syrup called orgeat. On sip, it starts with an apple cider-like tang before the creamy nuttiness of the orgeat transitions the flavor into the funky, grassy notes of rum and rhum agricole, far more complex and challenging than one might guess at for a drink that, on paper, looks like vintage Tiki fare. Also a curveball, the Songbirds and Snakes mixes vodka with matcha-honey syrup, lemon and aloe liqueur. It’s a lovely flow of vegetal, floral and faintly bitter, though my dining companion remarks that it reminds him of cucumber, caraway and rye bread — an odd but apt read. We also try a beer cocktail, the Trolley Uprise, which mixes neighbor Pikes Peak Brewing’s Tejon lager with Amaro Montenegro and grapefruit.

It’s bitter, fruity and funky, beer still present at the base but with the other ingredients adding body and expounding on its hoppy notes. Rival also offers cocktails on tap — we try the Revolution of Smiles, a funky, fresh-finishing drink that is, in essence, a rum Manhattan with added coconut water. The extended mull time from being batch-mixed gives the flavors time to get to know one another and meld into a refined, layered sip.

Mark Soto’s former food trailer has up-shifted into COATI. He’s hired sous chef Eric Hailey, formerly of Lucky Dumpling and Rooster’s House of Ramen, and expanded the menu, adding a few dishes, which we focus on in our review. We start with the chicken-andouille gumbo, which the menu calls award-winning and Hailey says is a big seller in colder weather. Due to the darkness of the roux and the andouille, there’s plenty of smokiness, and while we get a little crunch from the dirty rice in ours, we’re still in love with the earthiness and seafood notes of the broth, and a bowl between us doesn’t last long. Avocarne also rocks our proverbial socks, being a dish of smoked brisket with avocado, house slaw, and house-pickled onions and jalapeños, all served with flour tortillas. That brisket’s a treasure, smoky and crisp in half-inch cubes.

There’s real heat, but it comes from the slaw and those lovely pickles, so it’s easy to modulate. For something even more indulgent, we order the pork birria grilled cheese. And good lord, what a sandwich. Thick, buttery-rich, golden Texas toast has gooey Oaxaca cheese, sautéed onions and chunks of tender, flavorful pork outright oozing out the sides. That pork adds all the salt the sandwich needs and, with all that unctuous cheese, it’s some kind of wonderful gut bomb — but that’s before we talk about the dipping broth. Said broth doesn’t add salt, thank goodness. What it does add is an array of spices that help cut the fat and another level of savoriness to every bite. Oh, and it makes the cheese even meltier. Good stuff.

Given that Korean spot Anju is the brainchild of Piglatin Cocina co-founder Andres Velez and that it uses a cashier-and-kitchen-only business structure concept he has previously told the Indy he wanted to explore, we show up with high expectations. And, ripping the bandage off, we’re not wowed by anything we order. We start with the jajangmyeon, or needy noodles, a hybrid Korean-Chinese dish beloved throughout Korea. The dish itself relies on the flavor of Korean black bean paste, chunjang, for most of the flavor, punched up here with pork belly, zucchini and other veggies. And while the noodles have a nice chew and the pork’s tender, that sauce doesn’t do much for us — we find it kinda flat and one-note, though we’re not sure whether that’s the dish or the execution, as I’ve only had it one instance before, and my dining companion didn’t order this particular dish on a past trip to Korea.

We can pretty certainly say that, while the side of pineapple kimchi makes a nice condiment or snack, any fermented flavor it might have doesn’t make itself strongly known. The pineapple chunks come with a lovely sweetness and tartness, and served with sesame seeds, green onions and Korean chile powder (gochugaru, the flavor basis for condiment gochujang and for most kimchi). But color us underwhelmed. Seafood pancakes, the most successful dish, come thicker than related kimchi pancakes we’ve had at Korean spots around town, holding bits of shrimp and octopus. Though the batter’s a skosh gummy in texture, it’s sweet and picks up pan char really nicely, and the gochujang drizzle and soy vinaigrette add nice flavors.

Army veteran Luchal Lucas’ food trailer and catering has not escaped the eyes and palates of the Indy — we stopped in earlier this summer for a pile of crabalicious crab fries, which we previously described as “a seafood version of poutine.” Those are still on the menu, but we’re feeling a little more conventional, ordering a catfish fillet with a side of mac and cheese and “pink sauce.” That catfish comes buttery and mildly flavored — no bottom feeder earthiness to speak of — in a crisp, faintly spicy cornmeal jacket, a well-prepared piece of fish indeed.

It’s better under that pink sauce, which an employee calls a variation on tartar that reminds us of remoulade for its sweet tanginess. Our side of mac and cheese comes generously portioned, with a rich, gooey, sticky cheese sauce that 100 percent hits the mark. It’s topped with a whole mess of fine-grated Parmesan, which adds perhaps a touch more salt than the dish needs but adds a nice tang and makes each bite even cheesier. We also try the shrimp and wings on another occasion, and while the crispy, garlicky shrimp do well, the wings really earn our loyalty. We’ve had lemon pepper wings before, but these absolutely burst with citrus brightness, with garlic and black pepper following. It’s lovely, and the meat’s plenty tender and plentiful besides. Consider also the garlic Parmesan asparagus as a side, which is cooked in plenty of butter and should not be mistaken for a “healthy” option, though it’s a surprise to get good, flavorful asparagus this far from spring.

Look for the second part of our review of COATI in the Nov. 11 issue of the CS Indy.

What follows is part two of our COATI food hall review. Griffin Swartzell’s write-up in the Nov. 4 Indy featured four of the eight vendors on-…