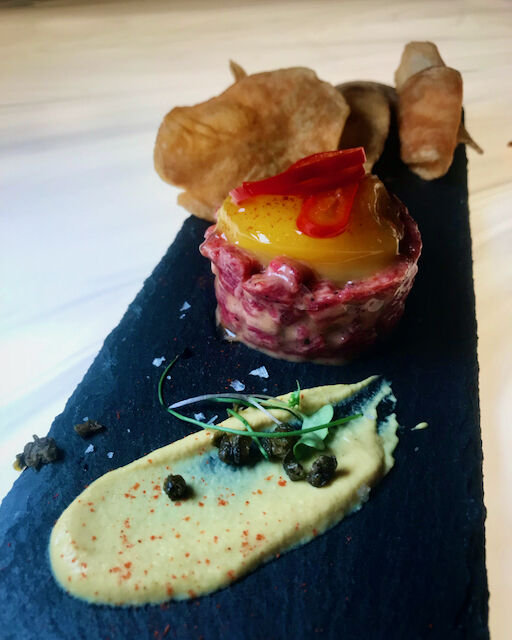 Wagyu steak tartare with a four-hour cured egg yolk, dijon and house, sriracha-dusted chips. This is a superb starter. The raw beef's delicate and creamy, coated in the rich, pickled yolk and set off by the piquant mustard. 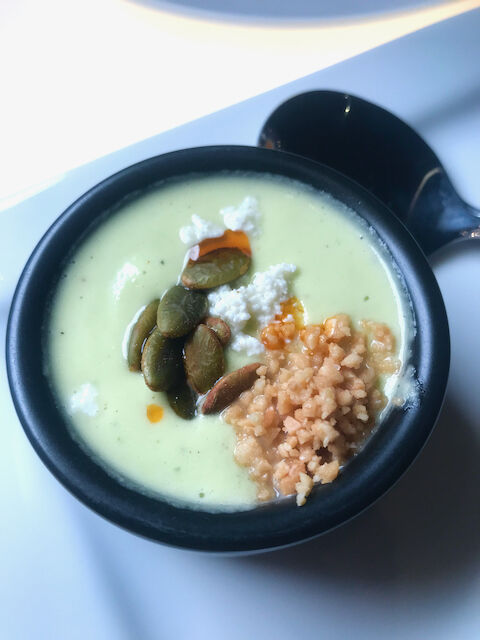 Chilled summer squash soup: with cucumber, buttermilk curds, espellete, pepitas, mojo picon (Siebenaller's is less garlicky and spicy than some traditional versions of the Spanish sauce). This is Mood's more interesting substitution for the more common chilled soup: gazpacho. It's light and fresh from the cucumber, almost foamy in texture, with crunch provided by the pumpkin seeds and ground Marcona almonds. Very refreshing. 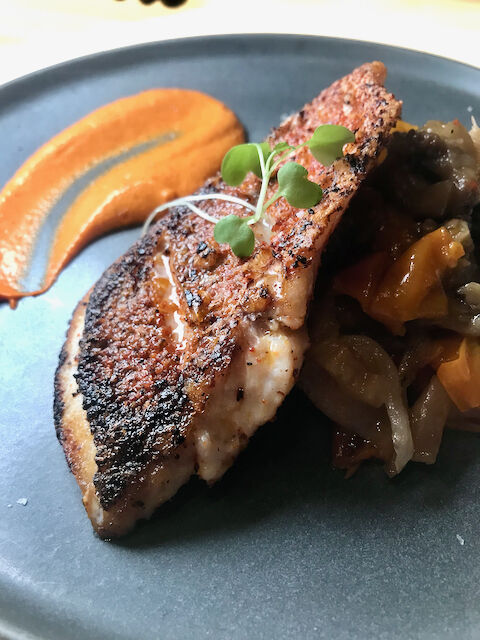 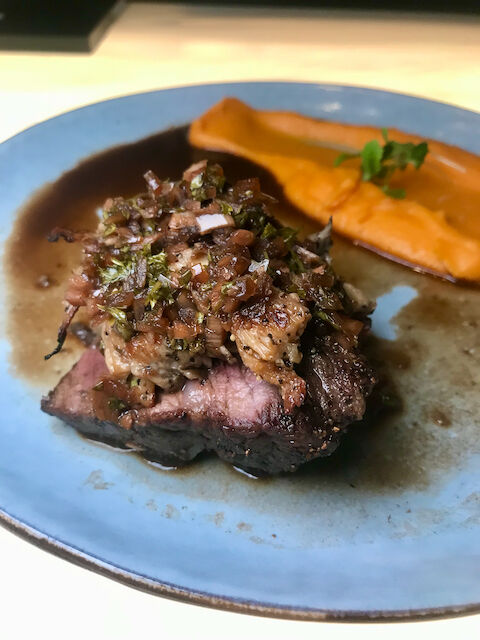 Wagyu filet with Microvora oyster mushrooms and sweet potatoes. The steak gets a sous vide bath and the mushrooms are grilled and tossed in Worcestershire sauce with a little soy and fish sauces, tallow, shallots, garlic and parsley. The potatoes gain a little extra sweetness from orange juice, and are whipped to an airy texture. The dish is an "umami bomb" in Siebenaller's words, countered by that touch of sweetness. Pictured is a smaller chef's tasting menu portion; a full plate given the meat's high grading/quality will set you back a menu-topping $65. 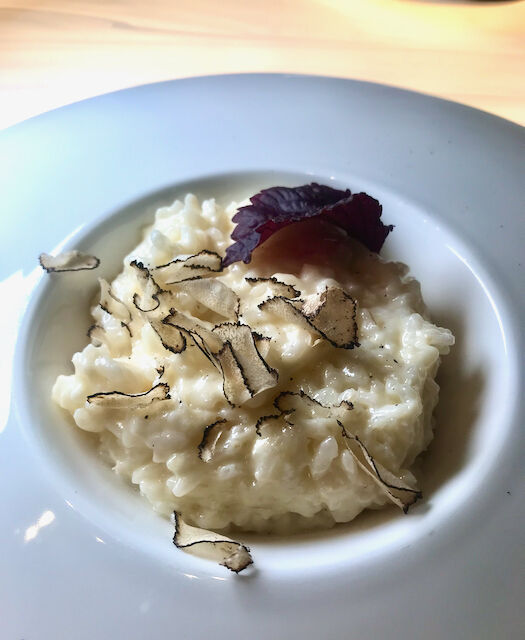 Truffle risotto: arborio short-grain rice with Grana Padano and shaved black truffles. The truffles are flown in weekly from New York. Microvora shiso leaf garnishing. Chef Siebenaller doesn't use the traditional chicken stock, so Mood's version is vegetarian. Instead he makes a vegetable and cheese stock by simmering the rinds of the Grana Padano. That's also what makes this rendition much whiter and brighter (since the chicken stock doesn't muddy it). The texture is perfectly al dente (from an initial par cook but finish fresh over the stove). It's delightfully creamy and rich with truffle essence. 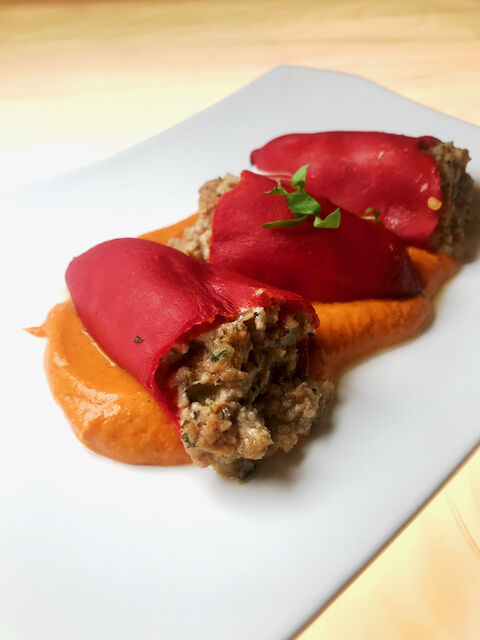 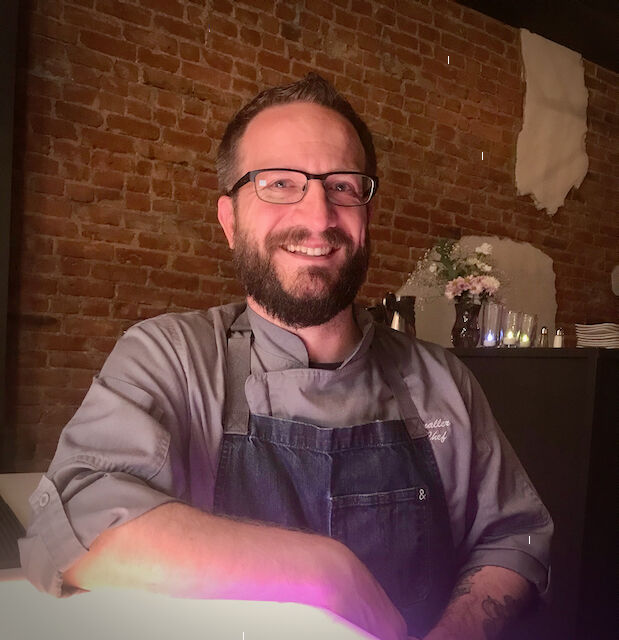 Mood Tapas Bar has a new menu, and more importantly a new executive chef: Noah Siebenaller, formerly of Beasts and Brews and Phantom Canyon. Siebenaller is now also the corporate executive chef for all of Choice Restaurant Concepts, which includes Mood, Districtelleven, Bird Tree Cafe and T-Byrd's Tacos & Tequila.
Siebenaller invited me down for a sample tasting at Mood, which is the first brand under the bigger banner which he's totally overhauled. The menu is entirely refreshed from top to bottom; even if an item such as patatas bravas existed on the prior menu, its plating, saucing and style has been changed up.
In the coming weeks, expect a refresh at Bird Tree Cafe: to "more of a cafe/bar than coffee bar" says Siebenaller. Districtelleven will also get its own dedicated food menu soon, and T-Byrd's will shortly be joined one space adjacent by Dirty Byrd's, Siebenaller's "wings and whiskey" joint. Expect more announcements to follow, in time, as the company expands.
Meanwhile, at Mood, the cocktails, wine and beer lists remain mostly the same as under prior chef T.J. Curry. It's the kitchen that's experienced the makeover.
Siebenaller says this is a whole different style of cuisine than he was doing at Beasts and Brews, which I have consistently reviewed in a very positive light. His food there was damn good, so I'm glad to report his quality cookery and standards have transferred along with him, based on this tasting. (I will also note I've been fairly hard on the Choice brands in the past, never finding the food fully up to the quality of the atmosphere and decor; so I will note this as an exciting page-turn for the company that should up its ante on the scene.)
Siebenaller says the Mood menu relies on traditional Spanish plates, but "with my twist." Because "Spanish tapas are often pretty boring," he says. "They're a snack to you over until later evening dinner. We're making them more of main items here."
He has also curated a fine meat and cheese selection for charcuterie boards via Longmont's Cheese Importers. Many products are Colorado-made, from companies like Denver's Elevation Meats and River Bear to Springs-anchored Sawatch Artisan Foods. (Another tidbit I picked up, which is appreciated on a health note, is Siebenaller cooks exclusively with Colorado Mills sunflower oil.)
Anyhoo, scroll down to see five more dishes I sampled, with descriptions and tasting notes attached: