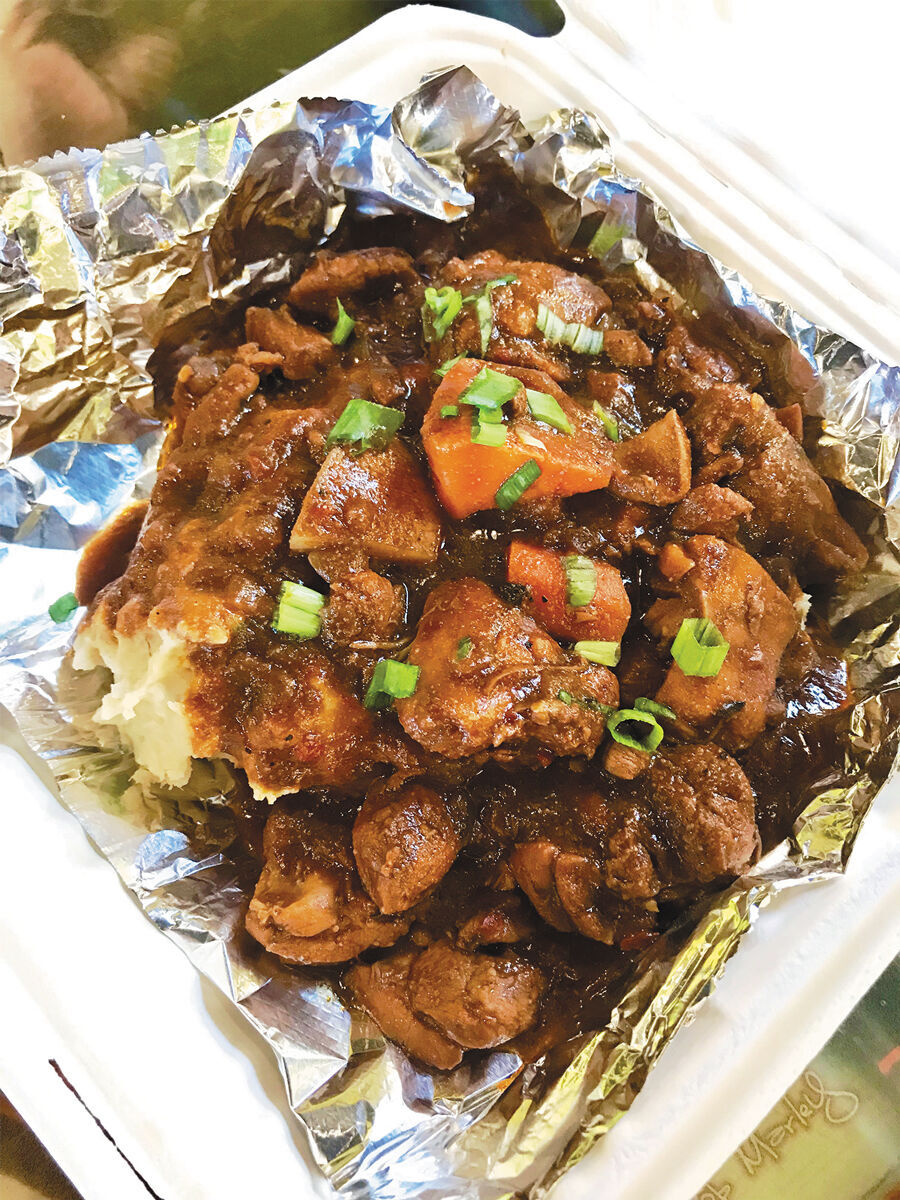 The star of this brown stew chicken with plantain mashed potatoes is the taters. 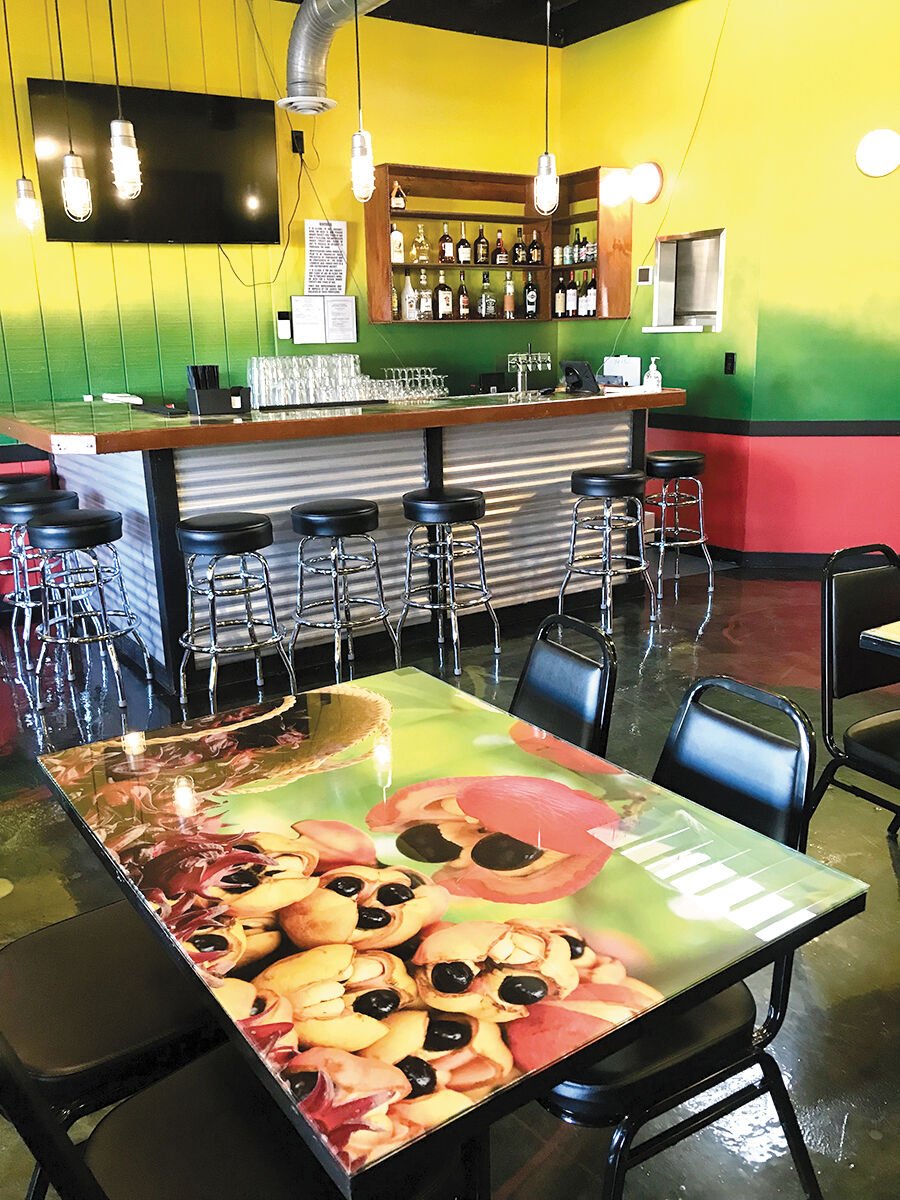 The rasta vibe is now stationary.

Toss a stone in Colorado Springs and you’re bound to hit a food truck. They were proliferating long before the pandemic, and the past year has only added new faces to the mobile scene. But nearly a decade ago we could count all those we knew of on a couple hands. One of the early ones to market, in 2013, was High Grade Foods, a Jamaican truck with a slick, rasta-colored banner wrap featuring a growling lion’s face. Fitting that roar were badass bites, hugely flavorful with island spice. Truck owner Everton Cameron had come out of four-star hotel work in Jamaica and he brought a level of professionalism quickly evident in his service.

The truck, often piloted by his wife, remains on the road with a busy weekly schedule, but back in late 2017, Cameron had purchased a brick-and-mortar spot on South Tejon Street, originally aiming to open by summer 2018. In late May 2021, he finally held his grand opening.

He rolls his eyes dramatically, flashing a shy smile and facial gesture of circumstantial surrender, laughing off the forever-long delay when I ask him about it as I’m dropping in for a to-go order. What happened? There were the usual permitting issues around renovations and other common upstart hurdles, and of course the pandemic, which put a wise hold on launching. During the delay, Cameron pulled off a stylish overhaul, doing a shiny epoxy floor treatment and bar-top epoxy pour as well that sealed vintage reggae vinyl and CDs and album art under a clear lacquer. The walls are now an ombre of yellow, green and red and dining room tables feature giant-sized photos of island fruits, cooking instruments and Jamaican street scenes under glass tops. High Grade also procured a liquor license and sells a few wines, a mix of Red Stripe and Pikes Peak Brewing beers, a bunch of sugary non-alcoholic Jamaican sodas, as well as a small selection of spirits dominated by Jamaican rums. A cocktail menu remains in the works.

While I await my order, I chat with Cameron’s sister-in-law who’s working up front, and request a custom mini rum flight of four Jamaican labels (for which I pay the fair equivalent) since it’s pre-rush-slow and she seems genuinely curious to know which ones I’ll favor. From Appleton Estate, there’s a reserve blend, a 12-year and a signature single estate rum blend. The label of the latter plays up apricot and peach aromas and a sweet molasses element. The reserve blends 20 different rums, asserting everything from baking spice to tobacco and honey characteristics. The 12-year talks up brown sugar, walnut scent and orange peel. Online descriptors for the un-aged (white) Wray & Nephew overproof rum talk as much about the cultural significance of this essential rum punch ingredient as they do about the smooth, somewhat neutral flavor. From my own tasting notes, I find the 12-year most wood-influenced, with a sweeter finish. The reserve’s smoothest to me; the signature indeed most molasses-y, and the overproof kinda like a white dog, basically begging to be mixed — Cameron’s sister-in-law loves it in ginger beer or coconut water. That I want to come back for if/when it’s available.

On my drive home, the smells from my to-go bag force me to break into the curry shrimp and crab wontons, five dough wrappers fried crisp with the fishy filling and placed over a Sambuca-laced, sweet coconut cream sauce. Holy shit! They don’t make it past downtown and I’m almost ashamed at how fast they disappear into my mouth, the aromatic curry sauce its own intoxicant. (Curry entrées include tofu, lamb and chicken variants.)

I intentionally skip personal Jamaican favorites like ackee and saltfish to focus on other newly added items at this sit-down space. One is a variant on the truck’s popular fried mac and cheese side, placing baked mac and cheese instead under jerk barbecue pork ribs. I sub that out for healthier coconut white rice (fabulous with just the right hint of coconut essence), and I also get steamed cabbage. Cameron cooks the buttery cabbage with just yellow and green onions and thyme; simple and perfect. The ribs, which retain a little cling to the bone and toothsome chew under a soft black bark, rate sensational. That’s thanks to a homemade jerk marinade and jerk barbecue sauce that’s molasses sweet and Scotch Bonnet SPICY, as in I’m blushing a bit and almost breaking a brow sweat, gleefully sticky-fingered.

Next comes brown stew chicken with plantain mashed potatoes, which I would almost present in reverse order because the potatoes are that damn good. You always know when you’re eating bullshit powdered potatoes versus the real thing, and here the real thing isn’t just ideally creamy and fresh mashed, but the restrained amount of plantains add just a soft edge of fruitiness that amplifies the inherent starchy sweetness. The chicken’s not an afterthought either. Some Jamaican places use the commercial jars of pre-made brown sauces, usually cloying from preservatives and coloring and such, but Cameron’s tomato-based stew stands aside thanks to proper foundational preparation, utilizing fresh herbs and no restrained amount of aromatic spices, plus molasses for balancing sweetness. Hunks of deboned chicken are tender and juicy, not spicy but spice forward.

Lastly, High Grade’s escovitch red snapper — presented whole fish, head-on, for a menu-high $20 — starts with a salt and liberal peppering of the snapper before frying it crisp (making the skin a treat of its own). Traditional escovitch pickling sauces vary, but Cameron cooks topping white and green onions with lemon juice and vinegar and a little olive oil, with some Scotch Bonnets adding a touch of heat. It’s a dish that takes a little patience to eat, working around the spine and pin bones, but the delicate white meat’s more than worth it, oily on its own and tasting quite fresh with the citrus treatment.

I don’t have a great excuse other than all the other eating I do for this job that’s kept me from seeking out High Grade recently in its mobile form. But this meal changes my intention for that, especially since the brick-and-mortar is a stable, easy-to-access location. Whether High Grade was always this good and I’m just reacquainting myself or if a bigger kitchen from which to fire food is the difference that makes it that much better, I can’t say. But I do know Cameron has cemented his reputation as much more than just another mobile kitchen out in the hustle — a true chef-driven venture that’s a sweet and spicy cut above.