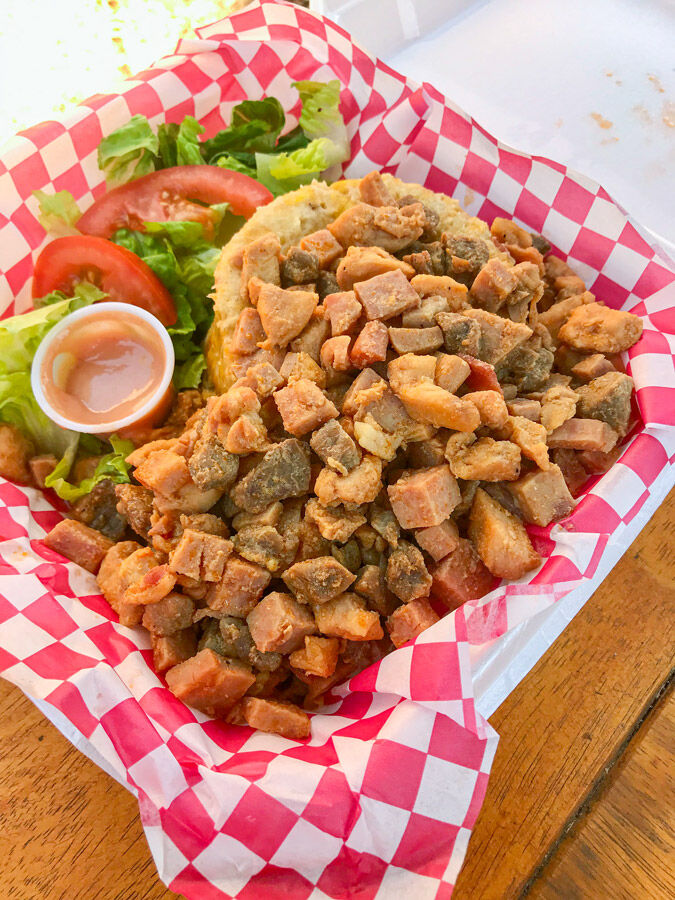 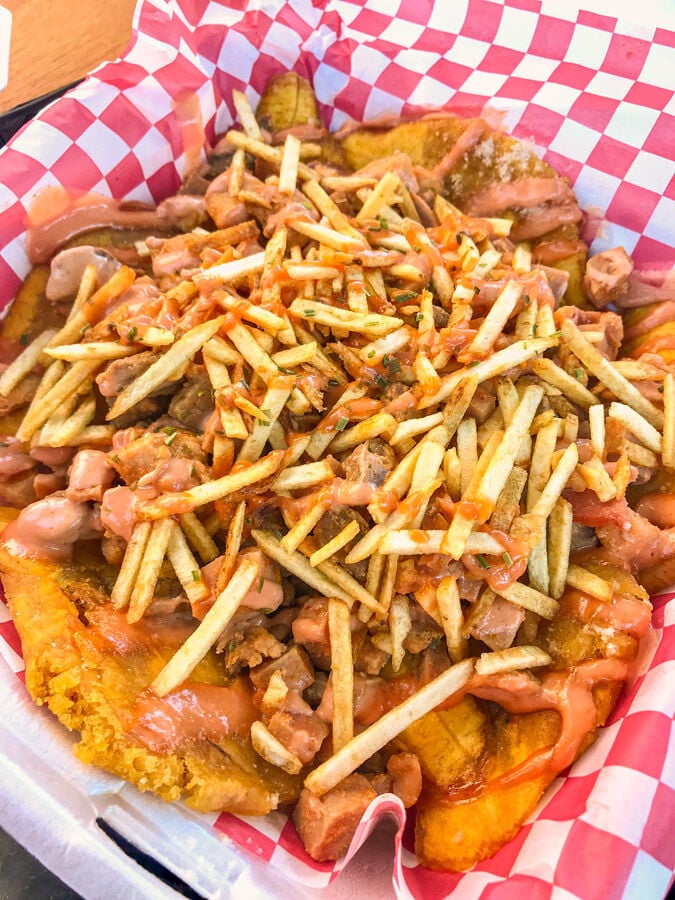 Tostones locos has your fry fix. 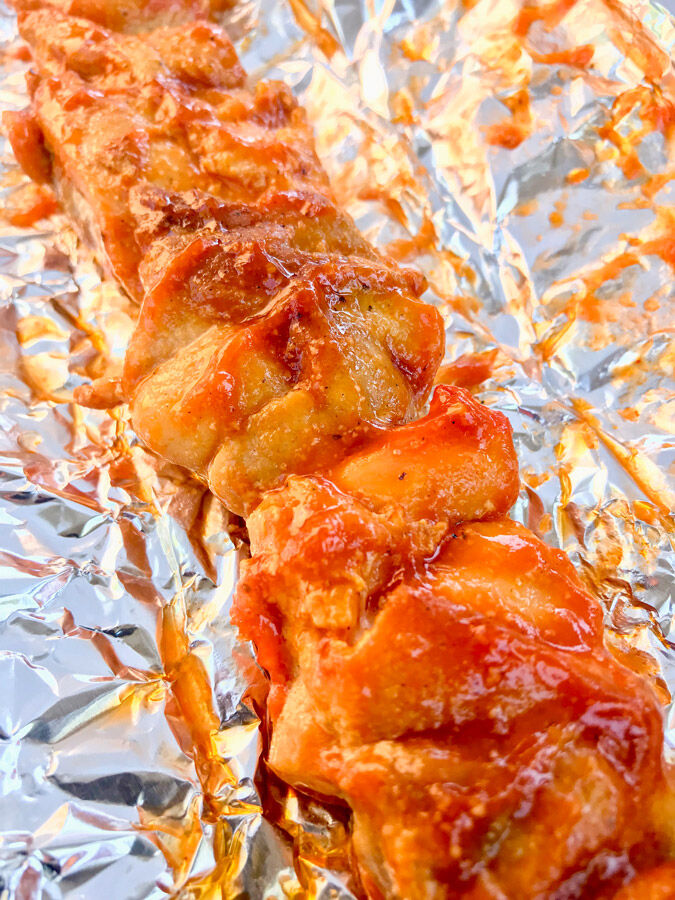 For all its saturation across popular comfort-food segments, Colorado Springs does not hold a deep history with Puerto Rican food. Past spots like Mi Viejo San Juan and Chinchorreo Fuera De La Isla didn’t make it long. Currently, Rumba Latin Cuisine hits a few dishes and Don Guillo reigns supreme as the only dedicated sit-down spot we know of. Which leaves Tripletas Yeyo Will as the sole food truck to our knowledge.

The average Springs resident therefore probably doesn’t know much about the Caribbean cuisine, having perhaps not been exposed to it. Which has the potential for making a visit to TYW pretty enlightening at the least, and easily enjoyable. In part, that’s because the food’s approachable and comfort-food familiar in its own way, which is to say fried things, heavy things and gut-buster portions.

TYW is run by Will “Yeyo” Santiago and his wife Marisol Vazquez, who moved here from Corozal, Puerto Rico, directly after Hurricane Maria devastated the island in 2017. He has an uncle in the Springs who lured him, and he initially found work with FEMA as a medical assistant, having previously worked networking computers and as an X-ray and CT scanner for seven years, he says. He was later employed by Johnson & Johnson, making medical equipment, until the pandemic delivered him a layoff notice. The following week he decided to follow a dream and start his own food truck, which finally launched in February 2021.

If a single ingredient should come to mind when you hear Puerto Rican cuisine, it’s the plantain. Whether applied green or ripe, the fruit shows up a lot of places on the plate. And mofongo’s the most traditional and arguably most beautiful expression of it, made here by hand-mashing deep-fried plantains to-order into a giant starchy mass spiked with garlic and bacon. Chicharón is often used as a cheaper option, says Santiago, but you’ll also find mofongo stuffed or topped with other meats, seafood or veggies.

A side portion at TYW costs only $7 and proves quite filling on its own, but five other menu options from $13 to $16 offer three shrimp variations, a chicken stew or tripleta mix, which is what we go for. The tripleta typically is a sandwich, ubiquitous on island at food trucks, which puts chicken, ham and steak together with mayo-ketchup sauce and shoestring fries (or tiny “potato stix” at TYW) on pan criollo, a sweeter bread like Cuba’s medianoche bread. So the tripleta mix mofongo skips the bread and frites and puts the cubed meat blend over the mashed plantains with a side of mayo-ketchup dip, and it easily feeds two. The mofongo’s garlicky and delightful alone and as pleasing as mashed potatoes with steak at a chophouse once incorporated with bites of the bits. The meats aren’t strongly seasoned and a bit dry and salty, giving off a hot dog vibe when consumed in tandem — so the sauce comes in handy for those who dig mayo-ketchup. I actually don’t, always thinking of children’s food or people in the Netherlands eating french fries (sorry boricuas!). I break form and mix cultures with hot sauce at home with my to-go order and don’t dislike the result.

A similar dish, tostones locos, starts with sliced, fried green plantains hit with a little garlic and then topped in tripleta mix already coated in mayo-ketchup and garnished with the potato stix. We skip burger options to focus on side dishes, starting with pinchos, which are juicy chicken hunks skewered into kabobs and coated with a tart, tangy, mildly peppery, barbecue-like “Yeyo sauce” that holds one secret ingredient Santiago won’t disclose.

Sorullos are Puertorriqueños’ answer to corn dogs: They’re cylindrical, oblong, sweetened cornmeal constructs that taste like Southern cornbread at a patio party, filled with waxy melted American cheese singles. (Again, I think of children’s fare.) Much more adult are the alcapurria, which appear longer and oddly shaped, almost like biscotti, but with three sides for a triangular slenderness. Santiago says traditionally banana leaves are used to form the masa they’re constructed with, but here wax paper suffices. Cassava, green plantain and green bananas constitute the masa dough, which appears blood-sausage dark (blood sausage is sometimes used as a filling) though these have ground beef seasoned with onion and culantro as the filling. The color actually comes from annatto. The dough takes on a dense but springy form once fried, making for a damn interesting meat-filled bread stick (called a fritter on island) that’s hearty and unique.

I also try two popular Puerto Rican sodas: Malta India and Coco Rico, sugar bombs both of them. The Malta (sometimes referred to as “kid’s beer” — and I’m not being the A-hole this time) contains barley and hops as a true brew would, but its sugars don’t ferment into alcohol and instead the finish flavor holds faint touches of molasses, brown sugar and maple syrup with a predominant barley flavor. Coco Rico tastes like the answer to “what if my can of Sprite mated with a coconut” (a question I know we’ve all pondered before at least once). I’m sure this level of cloying sweetness satisfies when actually lounging in the Caribbean heat, but just hand me a beer already. Since TYW can’t legally do that from the truck, I’m glad I’m home near my fridge as we fork the food from the butcher-paper-lined foam boxes into our mouths, moaning over the mofongo and needing a nap afterwards.