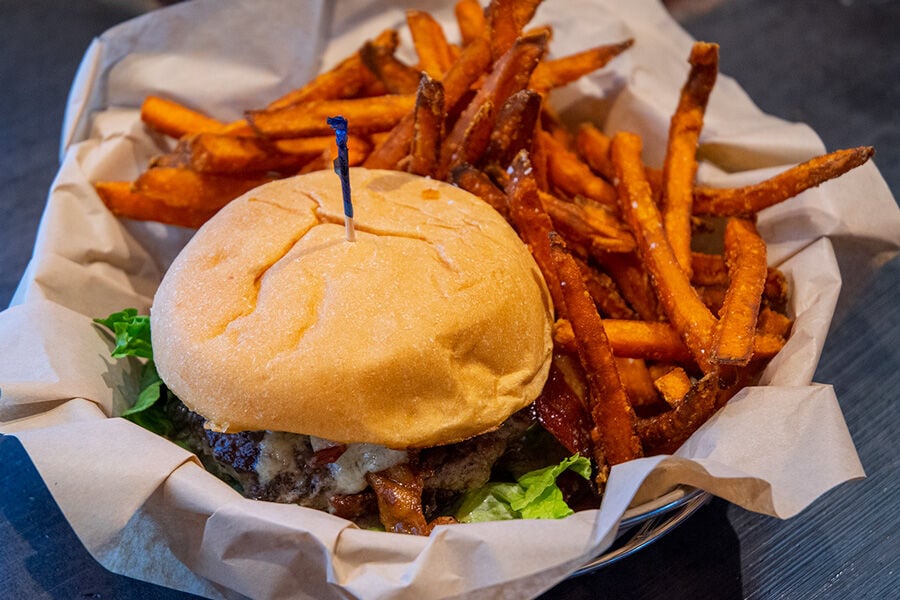 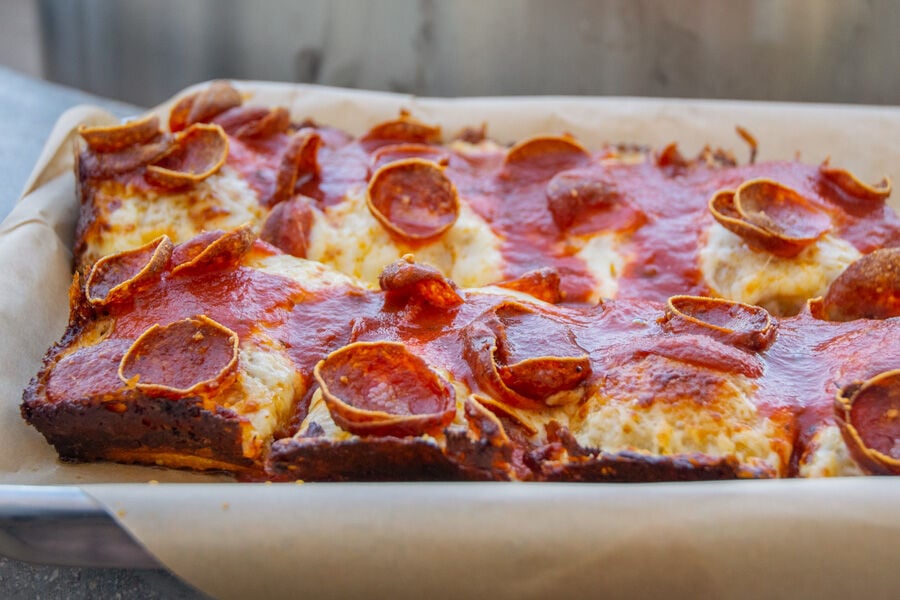 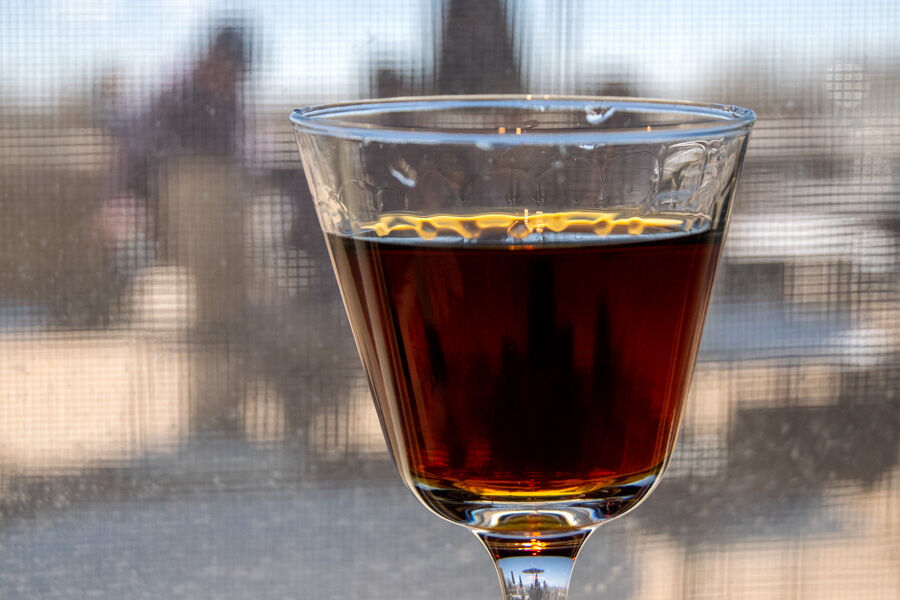 After partly closing for renovations during the pandemic, the Ivywild School as a whole reopened on April 2, and there have been more than a few changes under the Blue Star Group’s continued leadership.

Where Ivywild Kitchen was once the main food service option for the whole building, it is now one of four vendors, offering a smaller, more focused menu. It shares food duty with a pizza spot, Decent Pizza Co.; an Argentinian-style empanadas vendor, Lazo Empanadas; and an expanded healthier-eats food truck, Salad or Bust (which we’re not covering here, as Indy food editor Matthew Schniper reviewed the truck in February 2021).

As the Indy noted in March, the liquor licenses have also changed, allowing Bristol Brewing Company’s beers and Principal’s Office cocktails to be taken anywhere around the upstairs area. There’s also a new beer garden, accessible from the Bristol barrel room and set up under a big steel pavilion.

We start our culinary curriculum with Decent Pizza, which specializes in Detroit-style ’za. Detroit’s signature pizza, which dates back to the mid-1940s, is baked in rectangular pans, with Wisconsin brick cheese out to the edge of the pan and “racing stripes” of tomato sauce added as the final topping, sometimes after baking. According to Serious Eats, Motor City-style slices became a national thing around 2016, which tracks, given the Springs’ five- to 10-year delay on any kind of food trend (not that that’s always a bad thing).

Since it’s such a classic middle-American invention, we go simple and order double pepperoni, which delivers little pepperoni slices that curl into perfect little cup shapes, crisp as bacon and free of the oil slick that pepperoni typically contributes to pizza. The sauce puts its herbs forward and rates barely sweet, just enough to restrain the acidity. We’re not sold on the napkin-staining consequences of sauce on top, but melty cheese on a super-airy crust with buttery, crispy, caramelized edges can’t miss. Breadsticks (sourdough-raised like the crust) have more crisp than softness per bite, and they don’t hold on to their Romano cheese topping worth a damn. Still, as sops for great marinara, they’re aces.

Moving on, Argentinian-style Lazo Empanadas, a Blue Star-operated prep for a Denver company, is in a small tucked-away space; we’d never have found it without directions or the huge map on the wall nearby. That’s a shame, because their empanadas are quality across the board. Before we break the crust, we’ll note a cool product design decision: Each filling corresponds to a distinctive crimp design that goes around the edge of the pastry, so figuring out which we’re eating is as simple as checking the menu. Said crust has a surprising resistance to leakage despite being very thin, and it has a nice crispness without assaulting the roof of the mouth.

For fillings, we pick spicy steak, chicken caprese, fresh mushroom, and spinach and cheese from the savory menu, plus both banana nutella and milk chocolate caramel from the sweet menu. The steak has a pretty nice kick of pepper heat and flavor amid a whole bunch of cheese and a beefy richness. Spinach plays second fiddle to peppers and cheese, but it hits an overall Mediterranean vibe, by our fish-belly white estimation. The wild mushroom empanada has a great savory flavor, and again, those peppers and cheese do work, but it majorly drips with every bite; grab a napkin. Chicken caprese brings bright basil and roasty chicken together beautifully, and though it’s drippy, it’s delicious for sure. For dessert, the banana Nutella rates sound — zero surprises there — and the milk chocolate caramel cloys with sheer richness.

Meanwhile, the Ivywild Kitchen has condensed its menu to elevated burger-joint fare, offering four burgers, chicken tenders, specials and smothered fries. We keep our order simple, opting for a bacon blue burger with sweet potato fries on the side. Those who’ve been following our reviews of various burgers know we have something of a stick up our collective backsides about burger patties having enough beefy flavor to be more than a foundation for their toppings. Admittedly, that’s pretty hard for beef to do when it’s under some delightfully funky blue cheese, savory-sweet caramelized onions and good bacon, so we’ll give the beef some lenience and chalk its perceived mild flavor up to palate exhaustion from its bun-mates. When each bite bears this much punchy gustatory pleasure, we can’t complain, especially noting the way that spiced-not-spicy house burger sauce adds pickle brine funk and that creamy-yet-tangy brightness helps cut some of the heavy toppings.

For drinks, the Principal’s Office has expanded into the retail space it was once next to, offering a quiet, chilled-out seating area that provides some respite from the bustle of the building at large. The staff’s brought back a classic menu, which (unsurprisingly) works wonders. We thoroughly dig a mix of cold brew from Loyal Coffee beans and house ginger beer, which is like consuming rocket fuel with just that little bit of sweetness and dilution to make it highly drinkable. The ginger’s subtle — unsurprising, given the leading flavor of the coffee, but it’s for sure there.

For cocktails, She Tastes Like Cigarettes sips smoky, intense and faintly bitter, and it tastes like the ghost of a recent smoke break on the mahogany-painted lips of some troubled dame Dick Tracy would brood over, or whatever vaguely misogynistic noir cliché fits best. It’s made with mezcal, Averna amaro, brandy, Benedictine and bitters, and it’s served in a Nick and Nora glass, so if those rich, complex flavors and the gratuitous Sam Spade metaphor don’t make it clear, this’un is best enjoyed in small sips. Still, it’s a really good drink for feeling hard boiled without drinking straight whiskey. On the lighter side, they make a mean Last Word, which combines gin, maraschino liqueur, lime and green chartreuse to refresh the palate with a complex sourness full of nuance and depth that nonetheless finishes very clean.

It’s good to know that the PO hasn’t changed too much and that the quality of potables and service remains high. Some consider it one of the best cocktail spots in the city, and I can see why. Any changes have been for the better, and so it is with all the vendors we visit. The Blue Star Group has noted what worked at other food halls, such as COATI, and streamlined the whole experience, adding an expanded array of great food while also speeding up service.