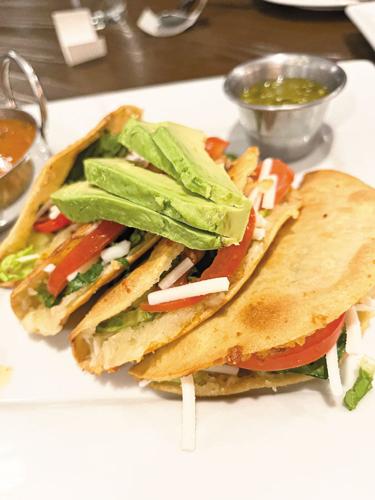 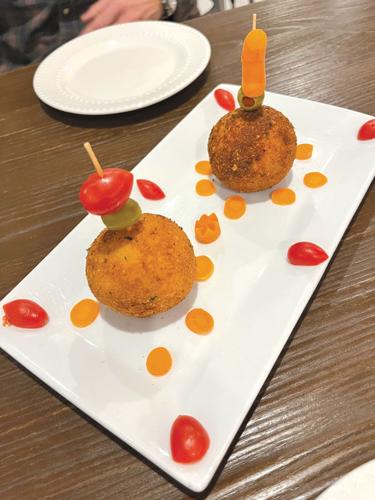 You must check out the contents of this frame in order to make changes.  Check out now?

Every now and then I experience a magical dining moment that simply demands gushing. Put on your seatbelt, because it’s about to happen.

For quite some time I’ve been urged by a friend or two to try out Rumba Authentic Latin Cuisine. I just never got around to it. Well, this month I finally did, and wow, what on earth had I been waiting for? From starters to sides to mains, the plant-based options are abundant and delightful. Before going out to new-to-me restaurants, I do what many vegans do: check out the menu online to manage expectations. At Rumba, I saw the word VEGAN on the menu just enough times to feel assured. Admittedly, once there, I was a little disappointed, because the printed menu only indicated vegan sides. Hey, no problem, I thought. I’m agile. I can pull together a delicious meal of sides with rice and beans and veggies.

Turns out, there was no need. The server explained the “vegan” didn’t make it to the menu’s entrée section, but the restaurant is fully prepared for several vegan main options. Whew. Fusion is the name of the game at Rumba: Cuban, Colombian, Mexican and Puerto Rican fare are prominent and by design. “We wanted a place where everyone can get what they want,” Enrique Perez who, along with his wife Alejandra are the new owners (since Rumba was last reviewed by Food & Drink editor Matthew Schniper in 2020). Once they took over, they also took that idea of food for everyone even further. Alejandra suggested they make nearly every side item vegan and gluten-free so that, indeed, anyone can eat at Rumba.

My feeding frenzy launched with Tostones Rellenos: fried plantains with a dollop of creamy guacamole. Sweet and savory is my love language, and the crispy fried starchy cousin to bananas delivered just that. Next came two entrees. The burrito — hold the beef — is a meal for two. A flour tortilla holds cilantro rice, veggies and red beans that are simmered so well they literally melt in your mouth. But the flautas are the show-stopper for me. The Impossible “beef” and vegan cheese are rolled with veggies into corn tortillas and fried to just crispy. They arrive covered in fresh veggies and that craveable guacamole.

We end our meal with small bites of cinnamon-fried plantains, as pleasing as they sound. And at this point, I strike up a conversation with the couple because my curiosity was piqued as to why they were so vegan-friendly. Turns out they have been so delighted by the support of the vegan community that they keep experimenting with ways to continue their goal to merge authentic Latin cuisines with their unique twist, while also making food for all. Enrique pulls out his phone to show me a vegan dessert they created for guests the week before. “Call to let us know you’re coming,” he said, “and this is what we can do. We want to have vegan options ready and maybe even a surprise vegan dessert for you.”

For my second visit, I decide to test that concept and notify the restaurant that two vegans would be coming in. And thus began the second feeding frenzy. We start with the Papas Rellenas, potato croquettes stuffed with Impossible “beef” and fried to golden. I could have had many, many of these, but it’s a good thing I didn’t. The chef made a point to have vegan tamales available, and they were phenomenal. Vegan tamales, without lard, can be a bit dry. So he uses pumpkin and squash purée to create a velvety texture that’s downright dreamy. Our next course is the Canoa: a whole plantain gently rolled out to hold up seasoned plant-based meat with vegan cheese. Garnished with colorful bell peppers, it’s served with a side of mashed yucca and caramelized onions.

Should I have stopped there? Sure. But why, when they said they could do a “fried taco” version of their flautas: flour tortillas stuffed with potatoes. Yes, please! I grew up with fried potato tacos and enchiladas and have rarely found them since. Biting into a crunchy taco and being met with the texture of a whipped spud was a walk down memory lane.

This robust meal ended with that

special dessert Enrique showed me on his phone during my first visit. Majarete is a cold pudding that’s made with fresh corn that’s been cooked, puréed and sweetened to perfection. Served with fresh berries and mint, it’s a surprisingly light bite.

Rumba has a full bar and features Latin drinks (and wine), a staff that feels like family, and a passion for food and community that’s refreshing and, frankly, heartwarming. This is the place to go when you’re managing allergies and varying dietary standards among friends and family. Truly — and yes, it’s a restaurant cliché — but here, there’s something for everyone.