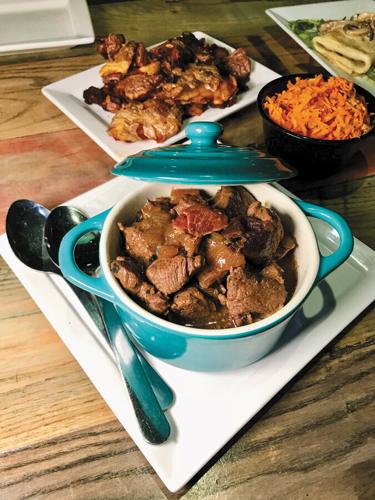 The bison Dutch oven — old-world peasant food at its finest 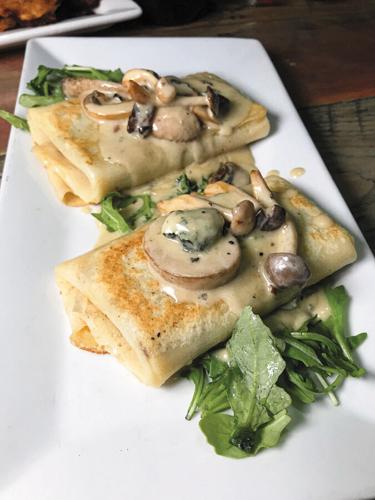 For as highfalutin as that may sound, Summa’s quite casual and relaxed. Managing partners Phillip-Pierre Rooks and Scott Rasmussen became close friends when working together at Jack Quinn’s Irish pub nearly a decade ago, splitting off to help open The Bench some years later, then bouncing to other industry jobs (they’ve got about 30 years’ combined restaurant experience), then back to Quinn’s during the pandemic, where Rooks bartended and Rasmussen consulted as a chef. This past spring, they noticed N3’s vacancy and initially made a joke about starting something of their own. Rasmussen’s soon-to-be father-in-law responded by saying “do it.” He bought the building, and now acts as their landlord. They opened Aug. 1.

His daughter and Rasmussen’s fiancée, Shelby Paul, helps out in a limited capacity, but otherwise Rooks and Rasmussen are Summa’s only two employees. It’s impressive; they do everything from serving and drink-making to kitchen prep, cooking and dishwashing. Though they’re cross-trained, Rooks tends to hold down the front of the house and Rasmussen works the line. Rasmussen tells me that “Summa” to them represents the culmination of all their respective efforts in the industry.

A quick note on the atmosphere: Very little has been done to the decor other than to remove a mural and donate a bunch of firefighter paraphernalia to CSFD Fire Station 3 nearby, and bring in some plants to decorate the back bar. So the feel remains industrial, exposed brick, pub more than bar. Only a little over half of the 30 available taps are stocked with craft beers currently, as Rooks says he’s careful to add taps as business grows; he doesn’t want beers to linger long by overextending, and would rather have a limited selection — of local brands like Goat Patch, Red Leg and FH Beerworks plus other respected Colorado craft labels like Outer Range and Denver Beer Co. — stay fresh. His cocktail list is a short six drinks deep (though you can of course order basic call drinks), matching a similarly pared-down food menu with around a half-dozen options each in three categories: D’ovens (mini Dutch oven dishes), Fork ’n Knife plates, and Sides ’n Stuff. (There’s also a weekend brunch menu, which we didn’t try, from 9 a.m. to 2 p.m., with five-each morning meals like chilaquiles and fried chicken crêpes and familiar breakfast drinks plus whiskey-spiked coffee and a peach Bellini.)

Rasmussen says on the whole the menu’s built around different styles of comfort food, but not all heavy. Five items from the relatively small list are vegan — Rooks and his family intentionally eat plant-based one day a week as an ecological effort — a few more are vegetarian and several are gluten-free. Rooks calls it “eclectic comfort food, familiar, but with a twist.” They all (including Paul) had influence on the final dishes. A vegan tagine represents time Rooks spent as an Army brat living in Belgium (where his mom’s from and where there’s a North African culinary influence from immigrants). A New Mexican stew hails from the Paul family’s kitchen archives, as Shelby was born and raised in Albuquerque. And a meatball marinara speaks to Rasmussen’s Chicago-area upbringing.

We order a family-style spread to share, and grab a few cocktails. The sangria margarita has the refreshing lightness of an orange soda water or diluted Mimosa, made with Naranja Orange Liqueur, Campo Bravo silver tequila and a Spanish white wine. The Old Timber arrives in a highly aromatic smoked glass and delivers Sagamore rye whiskey potency buffered by Fernet herbal bitterness and La Belle Orange Liqueur sweetness and citrus brightness; it’s a great whiskey drink. And in another nod to the vegans, the house Four Roses Bourbon whiskey sour uses aquafaba (chickpea brine) in place of egg white, for a foamy float atop the zingy base.

For bites, we do two options from each category. For sides, a vegan carrot slaw is simple but elegant and delicious, sweetened with raisins and spiked with parsley and champagne vinaigrette. Shotgun Pots are awesome, crispy-skinned, smashed red and gold potatoes that are so well prepared and perfectly salty that you don’t even need a ketchup dip — though we’re happy anyway for a ramekin of spicy agave-sriracha sauce that we also explore with on a couple other items.

From the Fork ’n Knife selections, the vegetarian Blintzini are a mashup of a French crêpe and an Eastern European blintz. Two thin pancakes are filled with a “mushroom caviar” — that being a reduced blend of tomatoes and several shrooms, including oyster, shiitake, maitake and trumpet. They’re garnished with fresh greens and a blue cheese cream, which adds a rich funk to the mushrooms’ deep, earthy umami. What a treat. Next, Creole Fried Chicken comes both from a compulsion to have a crowd-pleasing fried chicken item and lessons learned from Rasmussen’s trial and error at Le Cordon Bleu culinary school in Chicago. Three bone-in chicken pieces wear a crunchy jacket of zesty battering that seals in ample juiciness and a side buttermilk dip spiced with tangy Creole seasoning that has a satisfying, all-pleasing, Ranch-like quality.

For our two Dutch oven dishes — to be clear, cooked by other methods but presented in the cute, colorful mini ovens — we go for polar opposites of the vegan item and a bison and beer bowl. The latter’s based off a Flemish beef stew, reminiscent also of a coq au vin in a way, but with bison instead of beef or chicken. The bison — from Colorado’s Rock River Ranch — marinates in wine for 24 hours and braises in that liquid, resulting in a tender (considering the tougher meat) chew and extremely hearty finish. It’s homey, classic, like old world peasant food at its finest. The tagine, too, manages a deep comfort foodiness with potatoes, carrots, chickpeas, raisins, prunes and orzo, beautifully bold with Ras el Hanout spice (a complex Moroccan blend typically made with spices like cinnamon, ginger, nutmeg, turmeric, coriander, cumin, pepper and more). It’s the type of dish you’ll taste on your palate long after eating it because of lingering spice (especially if you burp, excuse you), and one enjoyable enough you won’t have that self-aware moment that “oh, I’m eating vegan.”

In trying about one-third of the menu, we’re pretty impressed at the overall consistency and quality among the diversity of flavors, and we’re curious to return and try that which we didn’t sample. Everything felt fairly priced (the dutch ovens $12 for example and plenty filling) and we received personable service from the two-man team, who I sat and spoke with at meal’s end to glean details. I like Summa because there’s a noticeable sincerity and even humility to it: just satiating food with ample elevation minus pretension or pomp. I mean, the Dutch ovens kind of symbolize it all. It’s a vessel that says home-cooked, you will be warmed, you won’t leave hungry.