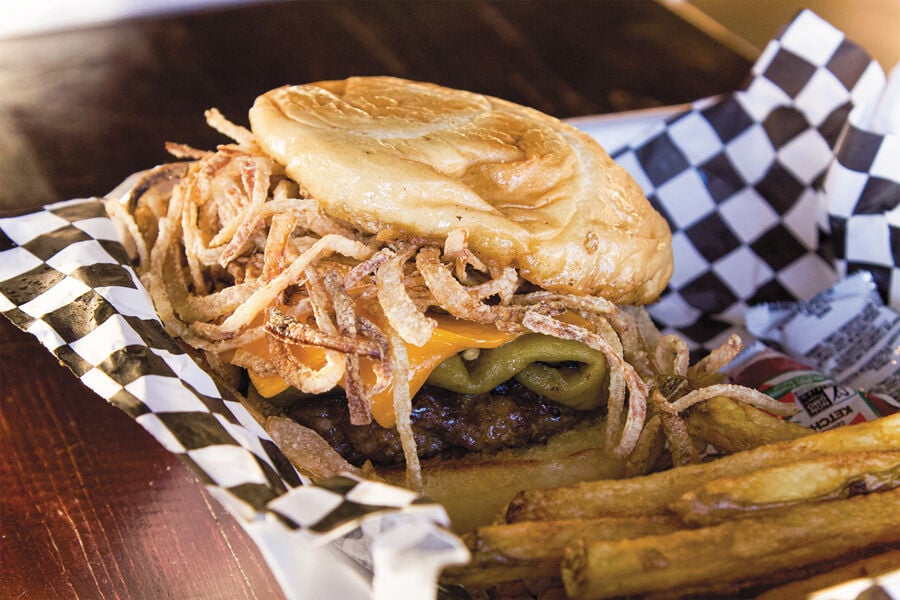 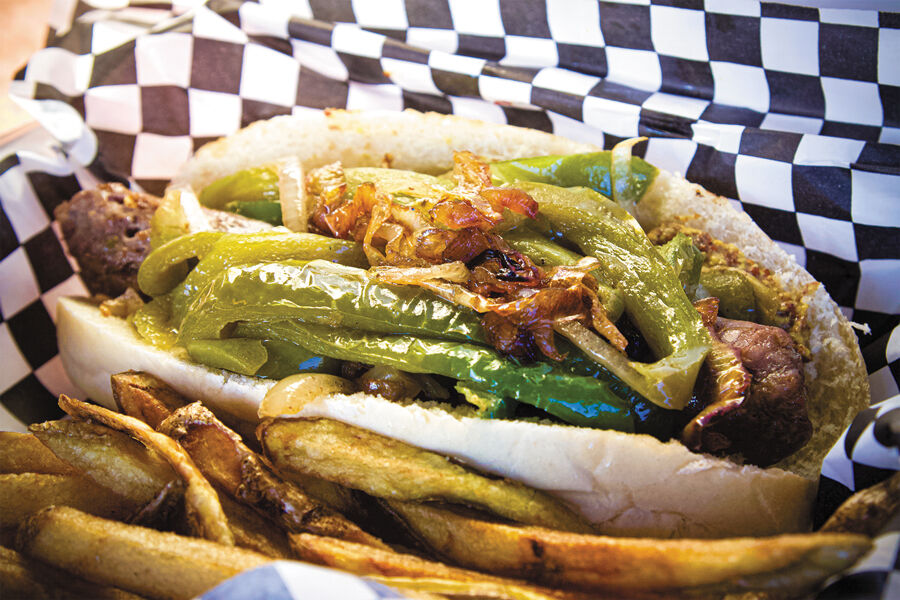 For a long time, colleagues and I have said that we wish we’d see more eateries, food trucks particularly, specialize in one thing: Do something so well that they crush the marketplace. Forget about dozens or even half a dozen menu items and the common “something for everyone” approach. Blow us away with the most badass whatever. Anyone can do a burger. If you’re going to introduce the next burger, make us feel something, crave it, tell friends, drive across town for our next fix.

I use that example because it’s probably the most omnipresent American menu item, but also because it’s exactly what Solsage Food Truck damn near blows our minds with when we find the newbie outside Lost Friend Brewing. I feel there’s good things to come when I see just four main menu items posted on a blackboard affixed to the black banner wrap featuring their sun logo. Co-owner and chef Nick Yatsko and co-owner Bria Naylor focus on homemade sausages and all-pork burgers with only one detour to hit Polish-style pierogies — a nod to their roots and the Polish communities found around Greensburg, Pennsylvania. There’s sweet or spicy sausage options, otherwise plated the same way, and two burgers that head different directions, even with separate bun styles. Fries are $2 and kids can get a beef hot dog. That’s it.

The two, with 15-plus years combined industry experience, moved to the Springs in May 2019 for “a new life” and Naylor continues to work as a digital marketer and graphic designer too. (Hence they have their shit together on social media, with slick style and vital info posted regularly, unlike so many mobile ventures that can’t be bothered to tell you where they’ll be in a given week.) Yatsko, who “grew up in the kitchen” and did a culinary arts apprenticeship program through a community college back home, also earned a business degree at Penn State. He’s been relentless in developing the recipes and concept for Solsage according to Naylor.

“This is the only way for us,” she says. “Anyone can buy a Johnsonville sausage at the store and sell it at a markup. But Nick has worked on these recipes for 3½ years to get them right. He started on a KitchenAid with a sausage-stuffer attachment at home.”

And the method’s not everything. “We want to be local and sustainable,” she says, noting they buy from Ranch Foods Direct and Delicias Bakery, deviating only for commercial pierogi they stylize with their own toppings. “Those were a stretch for me,” says Yatsko, but the cultural tribute and fact that the stuffed dough pockets taste so damn good won the day without creating menu mission-drift.

For the Italian-style sausages, he procures a 72/28 mix of pork butt to fatback that he coarse grinds, changing that to an 80/20 ratio on a finer grind for the burgers. Bruce Aidells’ sausage recipes inform Solsage’s final product, Cabernet-spiked and rich with fennel in both the sweet and spicy versions, the latter incorporating either Pueblo or New Mexico chiles for mild heat. The burgers are based on old German recipes, he says, with the exception of a Mexican lager instead of German brew. If you catch Solsage at a local brewery, they’ll also poach their sausages in one of the house beers before searing them, a method for tender, less greasy links. Yatsko prefers his flattop to a broiler for even caramelization and heat holding, so all temps and textures are ideal.

The Peak Green Chile Sausage Burger may tread familiar territory for our geographic area, with thick green chile slices, but combined with cheddar and crispy fried onion straws on a Kaiser bun, it makes for a hell of a burger, not all heat, still showcasing the juicy pork — a richer and rounder experience than a beef patty. The Homeward Bound Hazy New England IPA works as a super hoppy but smooth companion, making the burger somehow creamier-tasting to me (odd, I know, because acids cut fats).

Little O’s Marmalade Sausage Burger steals the show, though, with caramelized onions turned purple-hued by a Cabernet-marmalade reduction, lending sweet acid offset to gooey provolone and a subtly biting garlic aioli. Again the pork patty stars, but so too does the Puerto Rican pan sobao bun, reminiscent of Cuban medianoche bread for faint sweetness and delicate softness. Out of the gate, it’s one of the top burgers in town right now; we’re tempted to order a second one after taking our first bite. And though it utilizes more sustainably raised and locally produced meat plus gourmet bread, it costs only $11 compared to so many lesser-than burgers slowly edging their way past $12, $14 and beyond for factory-farmed meat constructs that don’t taste half as good as this.

Consider skipping the serviceable house-cut fries and get the potato- and cheddar-filled Yinzer ’Rogies as a more substantial side for $8; they’re topped with just-opaque fried onions, crumbled sweet house sausage, shredded cheddar and a sour cream dollop for cool, complementary tanginess. They’re a fine product for not being housemade and pair interestingly with The Swayze, a hazy IPA and sour wheat beer blend which we customize to a 75/25 ratio (up from a usual 50/50) to retain more bitterness in contrast to the tartness, which plays nice counterpoint to the starchy affair.

Of course you may catch Solsage at a different brewery or a spot that doesn’t serve alcohol, which won’t be a problem because the food’s standalone excellent. I ask Yatsko whether he’ll expand offerings moving forward and he says his aim is to “keep it simplified,” partly due to limited prep space at their commissary kitchen and because he too embraces a few things done really well versus more offerings just to have them. “It’s the same base ingredients with different preparations,” he says, noting he may launch some daily specials in time, like bison or elk burgers, but he’s adamant “I’m not going to start making pastas or anything.”