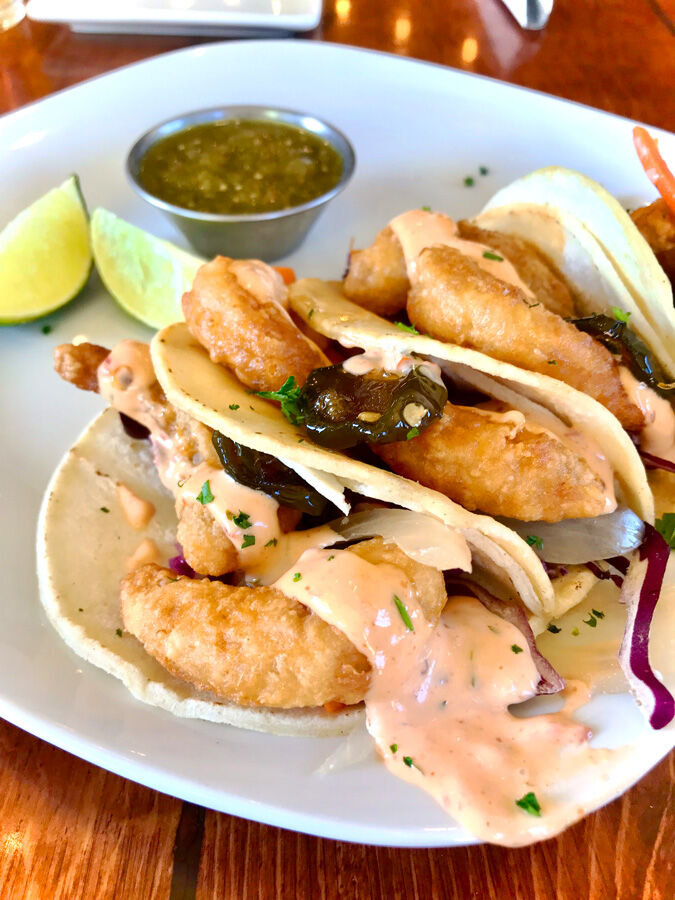 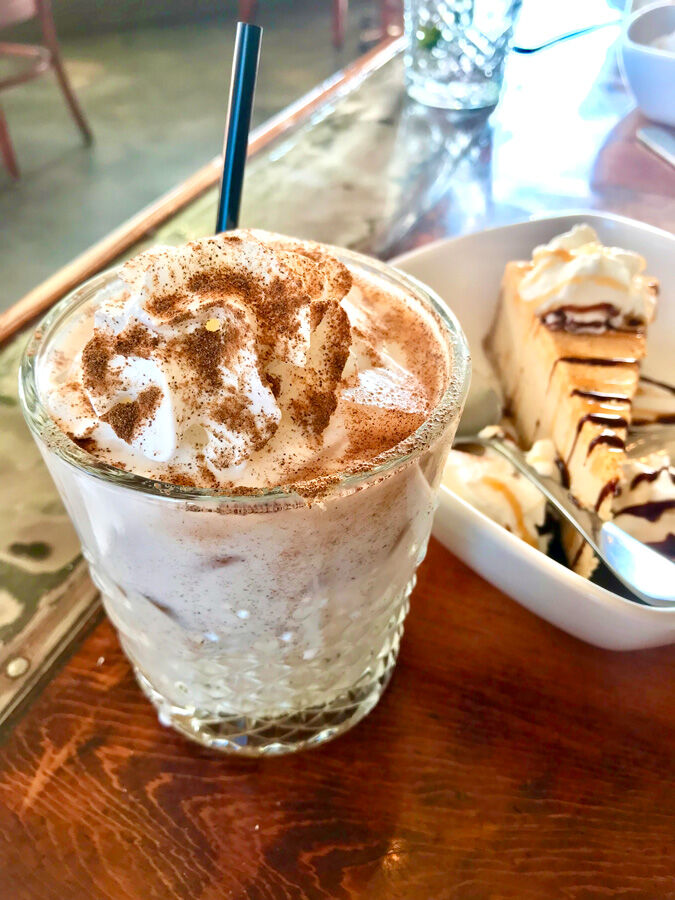 Cinephiles will appreciate the rich history of the Alexander Film Company, unknown to most Springs residents today. Back in the early 1950s, the local production house on North Nevada Avenue employed hundreds of industry workers, making advertisements shown during movie intermissions.

It hosted dozens of film sets, audio facilities and post-production departments, including special-effects and animation teams. At that time, the name Alexander was linked to the aviation world too. As a subsidiary, Alexander Aircraft Company manufactured planes in the late 1920s for the film company’s sales force, before going bankrupt in the early ’30s.

A snapshot of this legacy hangs on display in the taproom at The Alexander, a newly opened joint venture between Blackhat Distillery and The Public House Pub & Grill, taking over where former residents Tap Traders left off. The industrial setting makes for a neat backdrop for sipping a pint or cocktail or going all-in for a feature-length affair.

What we see currently is just the front room with much more to come, as Blackhat plans to move its spirits production on-site soon, greatly expanding its reach. In an earlier conversation with incoming building owner and distillery President Joe Koscove, he told me the sizable real estate will allow for producing 25,000 bottles weekly, with room to grow. Also owner of Koscove Metal recycling, he plans to add capacity responsibly at the already-solar-powered site, to include installing a water-recapture system.

Blackhat’s currently limited space on the Eastside has prevented it from expanding past around 100 restaurant, bar and liquor store accounts. Within a couple years, Koscove aims to be distributing widely out of state with its top-shelf, flagship labels and its more moderately priced Blue Fish brands (a nod to the former Blue Fish Distillery that occupied its current tasting room off Airport Road).

What makes The Alexander’s bar interesting is beyond the curated list of wines and rotating craft beers on 30 taps — it’s exclusively making drinks with Blackhat and Blue Fish spirits with an assist from commercial mixers until in-house liqueur and bitters programs ramp up. That’s a conscious decision, as the separate liquor licenses it holds do allow for serving other spirits — as opposed to places like Brooklyn’s on Boulder, which is only allowed to sell Lee Spirits products by law. So you can order your favorite vodka, rum, gin, whiskey, brandy or agave-spirit drink or neat pours. Or when we drop by in late October, we find a Halloween-inspired cocktail list and a couple house drinks our bartender offers.

PH owner Matt McCartan, in an earlier convo we had, credits his chef Karl Stolle for the awesome bar-food eats (which the Indy has consistently rated better than most on the market in the category). McCartan said this opportunity to pair with Blackhat “fell in my lap” as he and Koscove have been friends for some time, having met at the PH.

During our visit one late afternoon, fall wind drifts in with abundant sunshine through a garage door and my party of four starts with a round of drinks and a shared plate of sriracha shrimp tacos (coming four to a plate). They’re excellent, with a potent, punchy sriracha aioli and spicy salsa verde on the side for topping crisp-coated prawns that are tempura light.

The first, The Alexander, mixes Blue Fish whiskey (blended locally, procured from Kentucky) with homemade limoncello and lemonade for a whiskey sour spin that hits the right citric-sweet balance. The second our bartender has created and named the Black Widow, featuring the house agave spirit in soda water with muddled basil and Bordeaux Maraschino cherry; it’s mildly fruity, big on the fresh herb note and finishes faintly tequila-y.

Next, we dive into an assortment of starters, sides and mains. Onion rings are nicely breaded and browned and a twisted quartet of always-fabulous, soft, chewy Mark Anthony’s Pretzels dip equally enjoyable in spicy mustard and a house queso that’s like dolled-up nacho cheese topped in green chile. What’s listed as Western coleslaw doesn’t evoke any endless dusty horizons for us, but rates as your basic backyard slaw, fresh enough with cabbage snap and not overly sweet or wet or seasoned much.

The day’s special is a warm pastrami sandwich stuffed with flavorful, thin-sliced meat on toasted, dark pumpernickel rye with melted Swiss cheese and a tangy garlic mustard — great sandwich. We try both a Colorado beef and meat-alternative burger, each on a lovely Harvest Moon Baking Co. challah bun made in Denver — a well curated item that really ups the burgers’ overall enjoyability.

The Candied Caliente burger gets applewood-smoked bacon, jalapeño jam and cotija cheese crumbles with a thick tangle of cilantro microgreens. It’s damn good. A side of balsamic glazed Brussels sprouts makes us feel like we’ve made at least one healthier choice. I’m delighted to say the plant-based patty’s actually memorable; I learn it’s a Sysco Simply burger, totally vegan and made with non-GMO soy. Like Impossible and Beyond burgers, it absolutely fakes it till it makes it with a great texture and meaty enough flavor that picks up gooey gorgonzola and cheddar cheeses (my guest is eating vegetarian, so he leaves off the usual bacon) with another sharp garlic mustard accent (called the Craft Burger on the menu).

For dessert, we share pumpkin cheesecake that’s been purchased from somewhere, but nobody can say. It looks commercial in its perfect and even layering and is served quite cold, almost half frozen, so it tastes like an ice cream cake. We aren’t complaining, because it doesn’t taste overly sweet and has a pure squash/gourd flavor not buried in baking spices. So again, well-curated.

We finish with two house cocktails from the Halloween menu: the Full Moon Martini and It’s Fall, Dude. The latter is a White Russian-evoking vodka, coffee liqueur, pumpkin spice, cinnamon and cream mix with a swirly, cinnamon-dusted whipped cream cap. (Read: dessert in a glass, thick like a coquito). The Full Moon mixes gin, lime and pineapple juices with soda water darkened by activated charcoal powder (remember that trend in chichi smoothie shops?). Yes, a black drink is cool to see, the charcoal doing nothing for flavor, but the gin’s botanicals are buried under the big, acidic citrus punch and we just don’t enjoy it. Would that the bar were serving outside spirits; we wager something licorice or maybe an amaro would better suit the blackness thematically.

It’s no major matter that we find one off note in an otherwise pleasant experience. (We critics prefer that, so no piece reads like an entire fluff job; stumbles show a humanness and day-to-day restaurant reality.)

The Public House and Blackhat are coming to The Alexander with strong, established brands that are easily complementary, because good bar bites like quality hooch. The historic setting just adds more texture for table talk. Seventy years ago film reels were rolling; today it’s the stop-motion of tap handles dispensing suds, soon to be joined by the circular process of vapors rising in still columns to drip back out as the good stuff. History continuing to be produced.