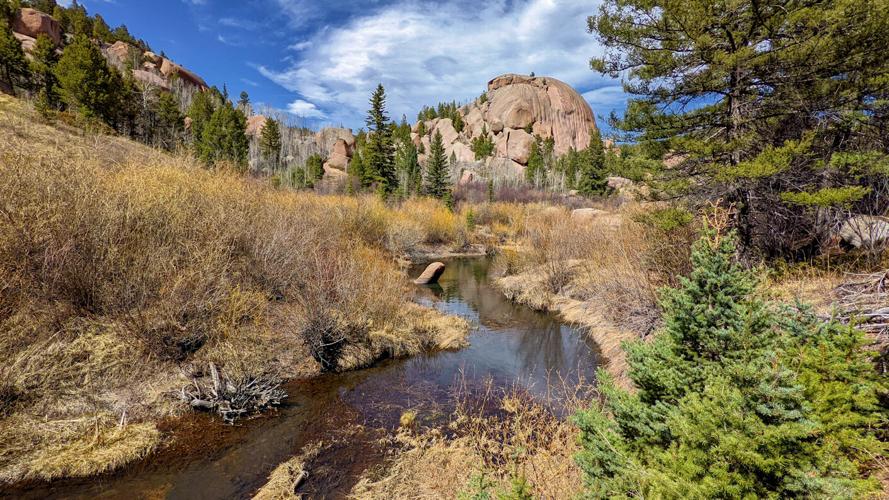 An epic view along trail 756 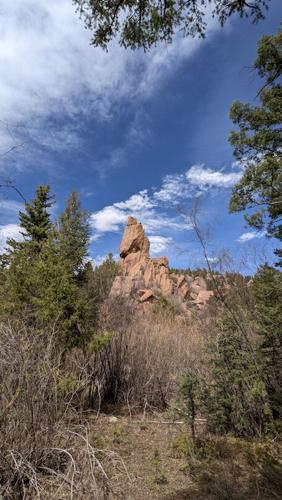 One of the many stunning rock formations on trail 756 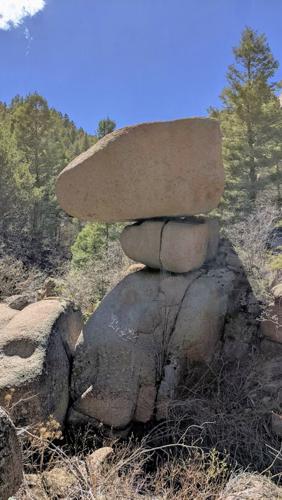 It's hard to tell from this image, but this rock formation is several stories tall. I call it "Thor's Hammer."

GPS track for my hike. The trailhead is at the lower right corner of this track.

When I first meet people and they ask what I do, I tell them that I get paid to go hiking. I go for a hike and then write a column about it. And I really enjoy searching for a new trail, or an out-of-the-way, little-known trail to share. Last year, I attempted to find one that I, and as it turns out, many others, saw on a map or walked right past but never discovered.

Forest Service Trail #756 goes up the narrow Limbaugh Canyon, just west of Mt. Herman, near Monument. According to various maps and the state's COTREX app, it branches off of FS Trail 715 a little over a mile from Mt. Herman Road. Trail 715 is popular trail with cyclists and hikers, starting near the Forest Service's Monument Fire Center, crossing Mt. Herman Road, and continuing until it ends on the south side of Chautauqua Mountain. I have hiked 715 many times and although I was aware of 756's presence on maps, I'd never seen the trail. Last year, I hiked on 715 several times with the specific goal of finding 756. I was always able to verify that I was at the location indicated on maps, but there was no sign of the trail. I bushwhacked to where I thought the trail would be, creating GPS tracks that looked like they were made by a drunken spider — but to no avail.

After these attempts, I contacted the Pikes Peak Ranger District of the U.S. Forest Service and told them I couldn't find the trail — either the maps were wrong, or time and nature had obliterated it.

Enter Tom Mowle of the Pikes Peak Group of the Colorado Mountain Club. As he tells it, he was chatting with staff at the Pikes Peak Ranger District about another trail and was asked if he knew anything about 756, due to my report. Although Mowle had never heard of the trail, he did some research and realized that he had been on the west end of it in the past. He consulted a book published in 2000 by Zoltan Malocsay, a hiking and trails legend in the Pikes Peak region, and at that time Malocsay noted that he also couldn't find this trail. I have Malocsay's 1980 Hiking Guide to Trails in the Pikes Peak Region, and this trail isn't mentioned in the book at all.

Long — and interesting — story made short, Mowle was able to find the trail by approaching it from the west, instead of the east, as I did. He found that the eastern 1.5 miles or so was mostly overgrown or strewn with dead trees and was almost invisible. Last fall, Mowle and other CMC members returned to the trail, cutting away some of the dead fall and pruning back vegetation that was obscuring the way. Mowle says the trail needs much more work, however.

I returned to the trail a few days ago, once again approaching from 715. If it weren't for some flags were 756 meets 715, you'd still not be able to find it, but the intersection is pretty much exactly where published maps and COTREX says it should be. In brief, the views on the trail are stunning, with huge rock formations on both sides of the narrow canyon through which Monument Creek cuts. I hiked for several miles to about .4 miles past a point where the trail drops down next to the creek and a huge beaver dam that has backed it up. Due to the late hour, I wasn't able to go all the way to the end of the trail and back, but Mowle tells me I saw its most scenic part. It's unclear what will happen next, but Mowle hopes that Forest Service will approve a stewardship project for CMC.

Things You Need to Know:  While trail 715 is easy  to navigate and only moderately difficult, trail 756, especially the first 1.5 or so miles going west from 715, is very difficult. Much of it is soft, deep duff on a steep slope. The trail is narrow and can be difficult to follow (look for the flagging). In some places, you'll have to climb steep grades, often on loose soil, or go over or under large boulders. The narrow trail, accompanied by the steep side slope, will give your knees and ankles a hard time as you'll rarely be walking on flat, level ground. If they are your weak points, you might want to pass this trail up, at least until it gets some more improvements. My hike was just under 6 miles roundtrip.

To Get There: From Exit 161 on I-25, go west on Hwy. 105 and continue west on Second Street through town until it ends at Mitchell Avenue. Turn left, then turn right onto Mt Herman Road. Take Mt. Herman Road for 5.1 miles to the trailhead, on the right. The 715 trailhead is about 1,000 feet past the Mt. Herman Trailhead. Mt. Herman Road turns into dirt at Red Rocks Road and it can be very washboardy. Still, it's passable by all but the lowest slung vehicles. Take your time or you'll rattle loose some bolts on your car, or your bladder.

The very popular Catamount Falls Trail in the town of Green Mountain Falls, which has been closed since last August due to a property dispute, is now set to reopen. When attempts to find a resolution to the encroachment failed, the Historic Green Mountain Falls Foundation stepped in and purchased the property, allowing the trail to reopen in "early spring 2022." This is a great example of a private and public partnership to preserve an historic hiking trails. You can read the details in the news release, below. 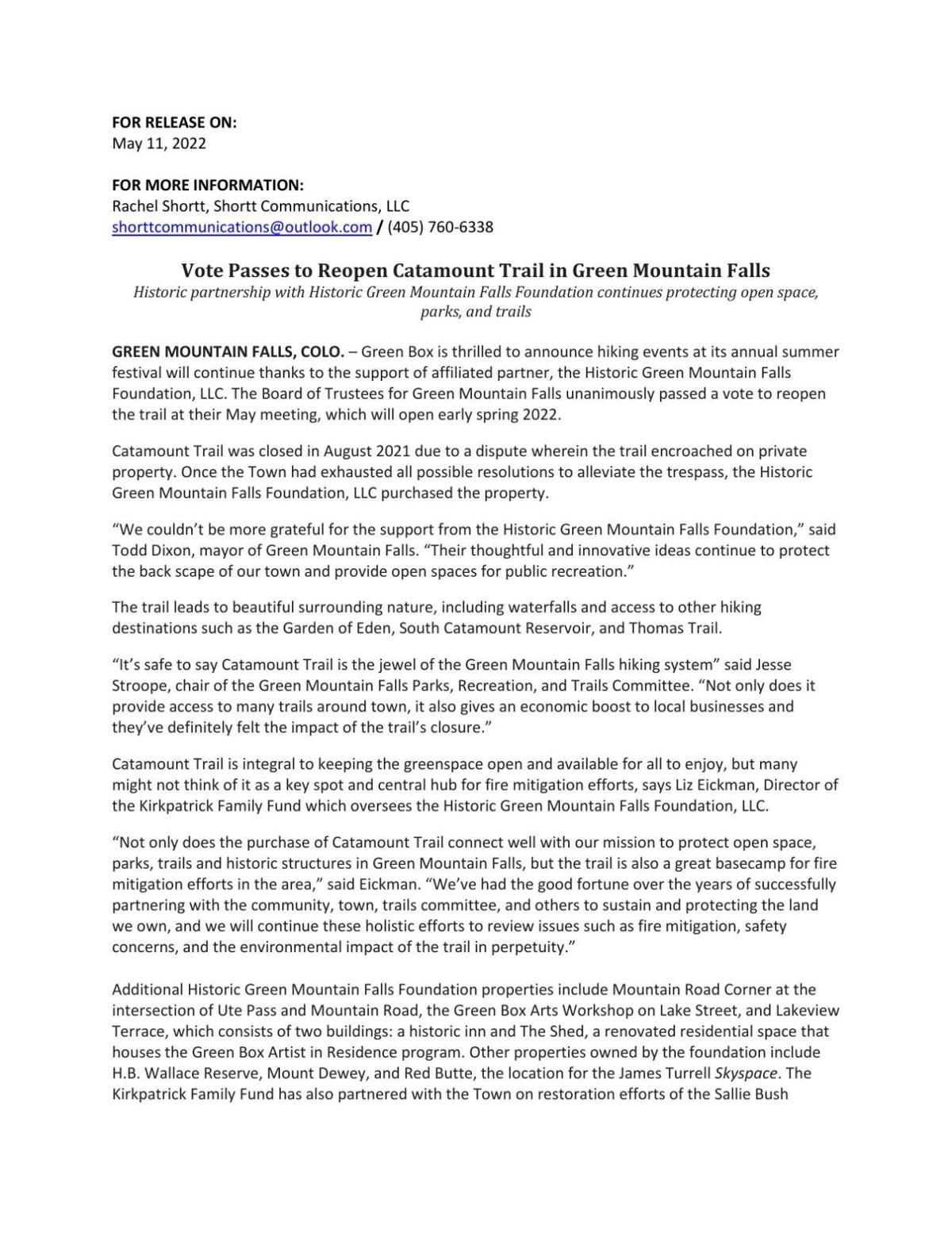 The El Paso County Parks Department is in the process of updating its systemwide master plan, and is seeking comments during its public input period. You can read the draft version of the 2022 master plan and submit your comments at the EPC Park Plan website. This is your chance to influence the direction of the county parks system.

Be Good. Do Good Things. Leave No Trace.

Bob Falcone, a retired firefighter and USAF vet, is a photographer, hiker, outdoor advocate, Leave No Trace trainer, podcaster and book author . He has lived in Colorado Springs for more than 30 years.