You are the owner of this article.
Edit Article Add New Article
You have permission to edit this article.
Edit
Home
News
Food & Culture
Opinion
Events
Best Of
Promotions
Multimedia
Digital Edition
Advertise
Donate
And More...
Share This
1 of 8 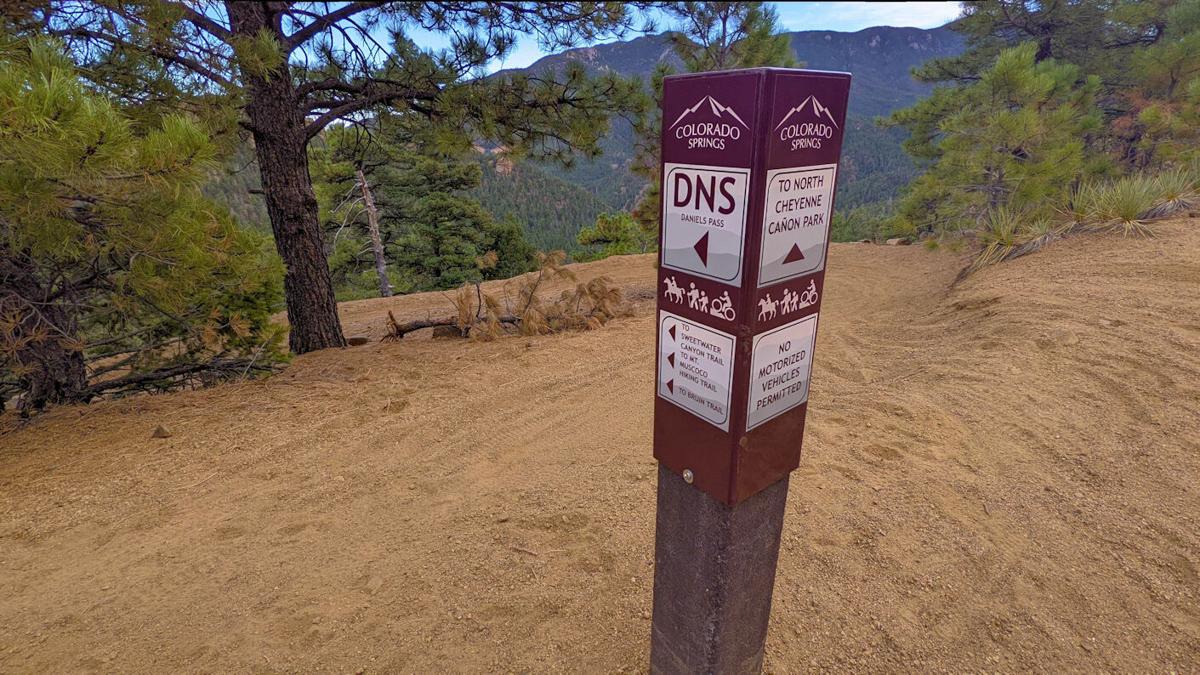 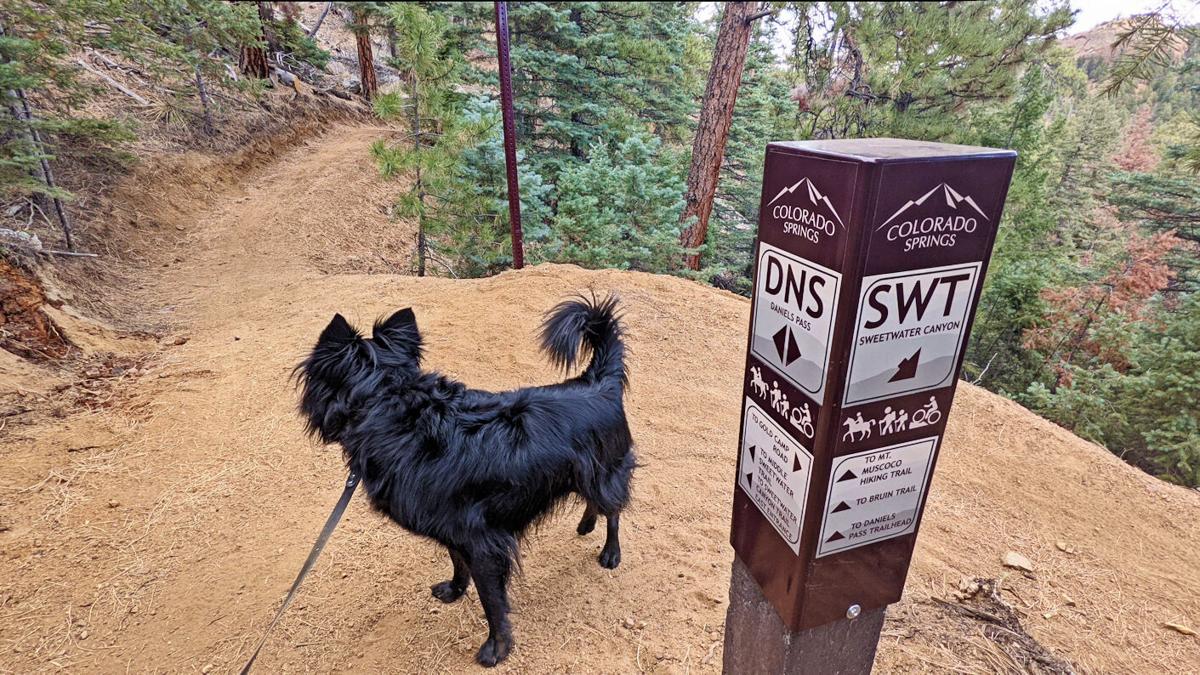 West intersection of the Daniels Pass and Sweetwater Canyon Trails. For this hike, continue straight on Daniels Pass. 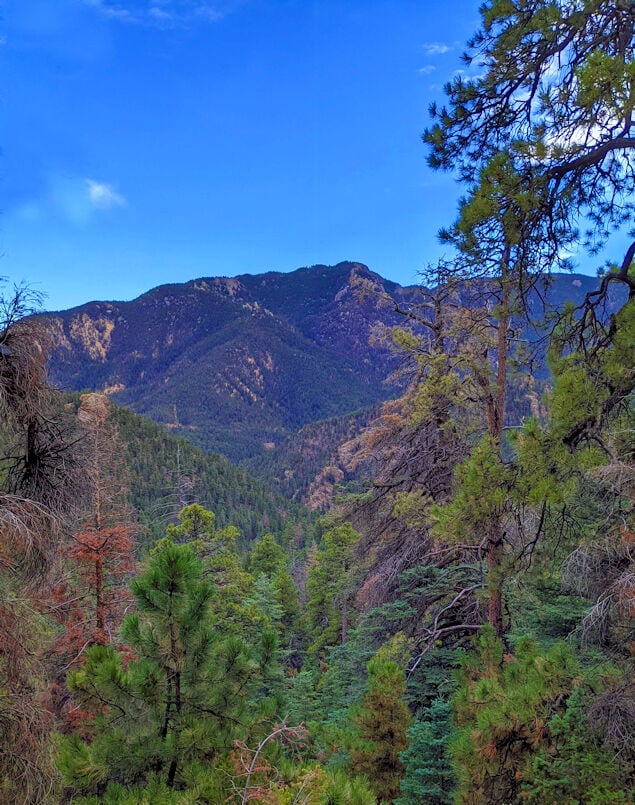 View of Cheyenne Mountain from the Daniels Pass Trail 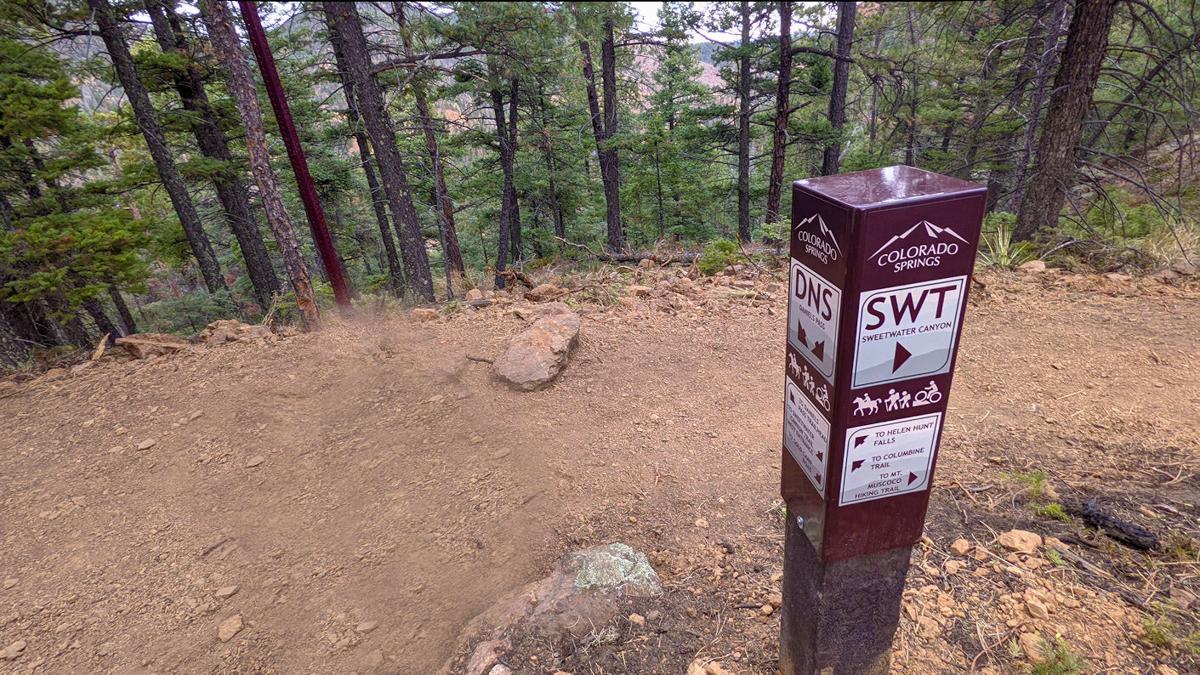 At the second intersection of Daniels Pass and Sweetwater Canyon, turn left, and start downhill. 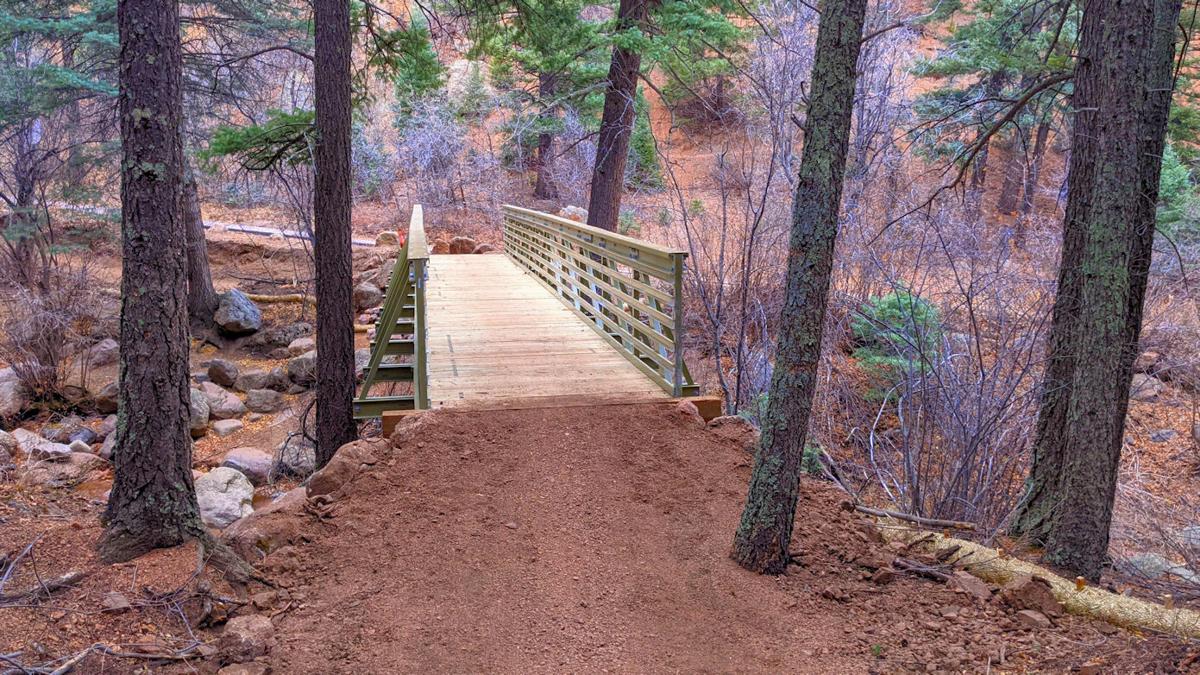 This bridge is one of the biggest improvements to this trail. Prior to this, you had to find an old, rickety and unstable "bridge" comprised of a couple of thin logs thrown over the creek. 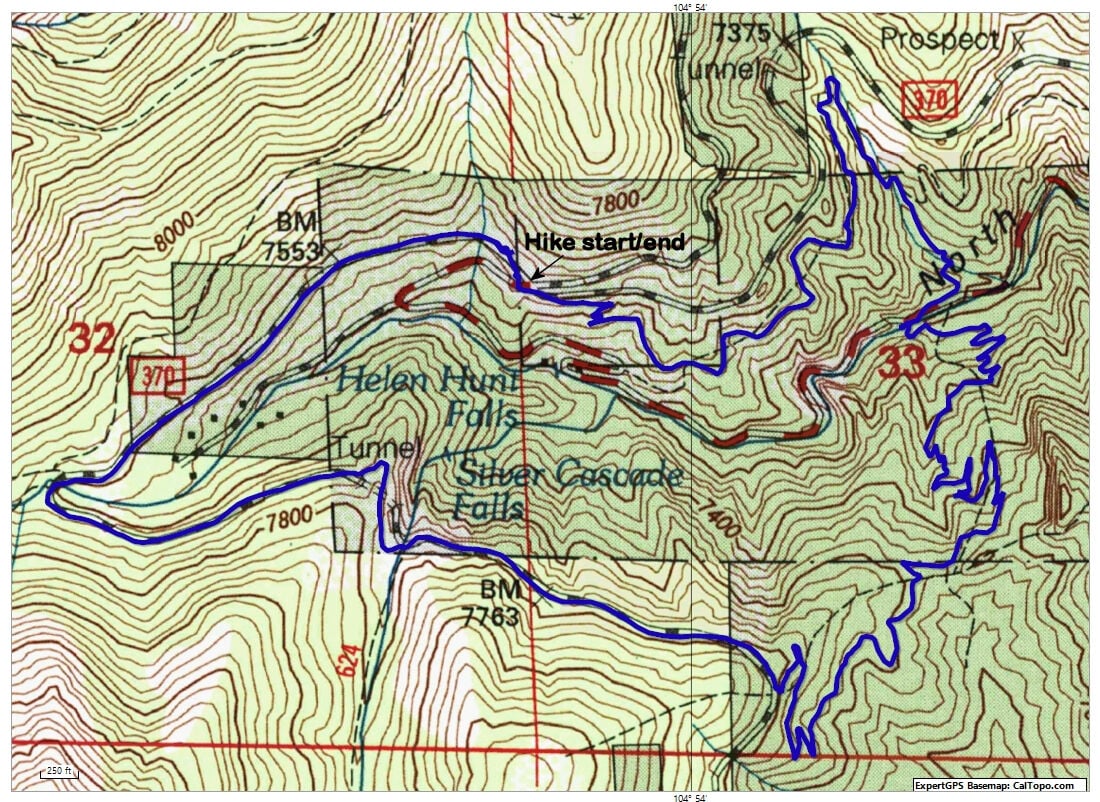 GPS track for this loop. This hike went counter-clockwise. 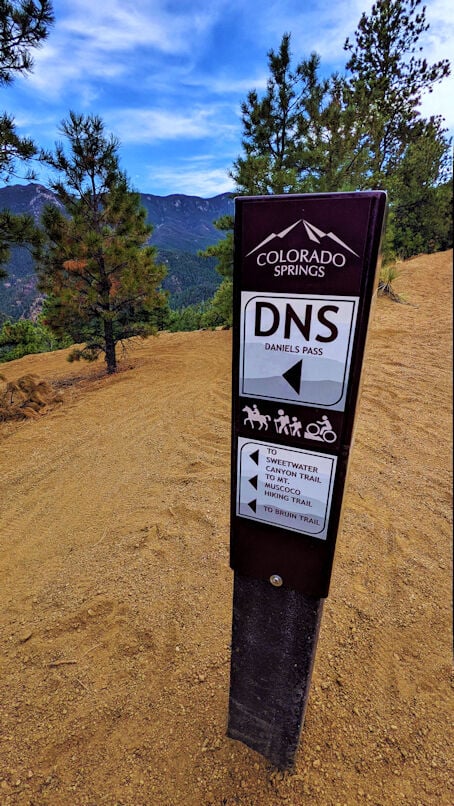 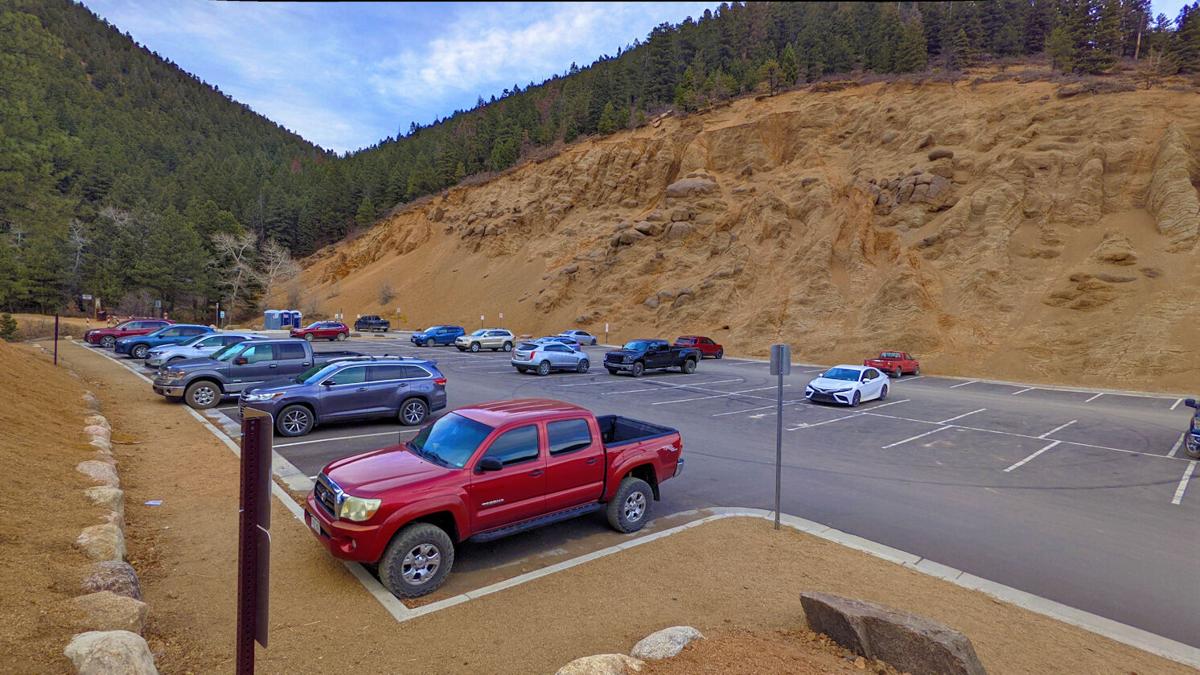 The "original" Daniels Pass Trail in North Cheyenne Cañon Park is known for its difficulty. It's unreasonably steep and often covered with ground-up Pikes Peak granite that makes climbing difficult — and makes going down dangerous. Add to that some heavy erosion, unmarked trailheads and having to figure out your way across North Cheyenne Creek, it's easy to see why many people didn't know the trail even existed, and why it was ripe for a renovation.

The Daniels Pass Trail was part of a larger project in this part of North Cheyenne Cañon Park, a project that also included building several miles of new trails, as detailed in a previous column. It was announced last week that the Daniels Pass project had been completed, so I went there to see firsthand how things turned out.

From here, the hike is pretty straightforward. The first intersection you'll encounter is the west end of the Sweetwater Canyon Trail, at which point you'll remain on the Daniels Pass Trail.

From here, turn left and start downhill on Daniels Pass. This is where the most significant improvements to the trail were made. This section, from the ridge down to North Cheyenne Creek was, in places, very steep. The section of the trail now has a number of switchbacks, which makes the trek easier and safer, but also longer than it once was. The new Bruin Trail intersects with the Daniels Pass Trail at just under 3 miles, at the apex of one of many switchbacks. Bear right and stay on the Daniels Pass Trail. Finally, at about 3.75 miles, you'll come to a new bridge that crosses the creek.

Cross the bridge and pick up the continuation of the Daniels Pass Trail on the other side of North Cheyenne Cañon Road. The trail goes for about another .3 miles to where it meets the lowest point of the Upper Columbine Trail. Turn left here, and follow the Upper Columbine Trail for another 1.5 miles, where you will end up at your starting point. The total distance of the loop is approximately 5.25 miles.

Things you need to know: There are a number of alternative paths you can take while on this hike, so feel free to explore. The area is well marked with a new signage package developed by the Parks Department, which is appearing in other locations as well. These trails are not yet on the COTREX app or website, however, but the Parks Department is working on updating all the city's parks and trails on that system, with a goal of having that complete by the end of 2021, according to Senior Landscape Architect David Deitemeyer, who was also the manager of this project. A map of the Daniels Pass area is available here. There are porta-potties and a trashcan available at the trailhead, but no water, so make sure to bring your own. Other than the gradual and easy elevation change along Gold Camp Road from the Powell lot to the Daniels Pass Trailhead, the only significant elevation gain is from the intersection of the Daniels Pass Trail and the Upper Columbine Trail. Total ascent for this hike is under 900 feet. The Daniels Pass, Sweetwater Canyon, Mid-Sweetwater Canyon, Bruin and Columbine Trails are multi-use trails, with the exception of motorized vehicles. Please use appropriate trail etiquette and be nice to each other. Leashed dogs are permitted.

How to get there: North Cheyenne Cañon Road is closed until May for a bridge replacement project, so the only way into the park by car is via Gold Camp Road. Gold Camp Road is a dirt road in the park and while generally passable by car, it can be difficult when snow-covered or when it rains, and is usually washboardy. The gates to the park are closed and locked at 9 p.m. from November to April and at 10 p.m. the rest of the year, so plan ahead.

Be Good. Do Good Things. Leave No Trace