The Colorado Springs Parks Department has unveiled a plan to expand the use of electric powered bikes ("e-Bikes") on its trails and in its parks. Under existing rules, "Class 1" e-bikes, those in which the electric motor provides power only while the bike is being pedaled by the rider, were allowed only on Tier 1 trails in the city. Tier 1 trails are typically wide, often paved, connect neighborhoods, and are often used by commuters. Under the same existing rules, e-bikes of any type are banned on all other trails or parks managed by the Colorado Springs Parks Department. All of that will change with a one-year pilot program slated to start on May 31.

For an explanation of the different classes of e-bikes, see my earlier column here.

In November 2020, the Colorado Springs Parks Department conducted a two-week survey to gather public opinion on the use, and possible expansion, of e-bikes on its trails and in its parks. More than 1,600 surveys were taken and 2,400 comments were made during the period. Users of parks and trails were almost evenly split between cyclists and hikers, with the majority of respondents indicating that they use the city's parks and trails at least weekly.

Providing an opportunity for riders of differing abilities to ride together, and also for older people to have an opportunity to ride where they could when they were younger, were the number one and two biggest reasons survey respondents gave for being in favor of expanded e-bike usage, with alleviating trailhead parking congestion coming in a close third.

Among those not in favor of expanding e-bike usage, concerns about increased conflicts between different user groups and the physical impact on the environment were the primary reasons for their opposition.

Generally speaking, there was slightly more support among respondents to allow for the expansion of e-bike usage on city trails and in city parks.

As a result of the survey, the parks department will be starting a one-year pilot program expanding the use of e-bikes, on May 31, 2021. Under the pilot program, class 1 and class 2 e-bikes will be permitted on urban (tier 1 and 2) trails and class 1 e-bikes would be allowed on all trails and in parks where traditional bikes are currently allowed. A 15 mph speed limit on all bikes will also be placed into effect under the program.

According to Scott Abbott, the Regional Parks, Trails and Open Space Manager for the Colorado Springs Parks Department, the department will use the pilot program to get feedback from the public and park users to gauge how well the program is working. According to Abbott, a public education program will precede the start of the pilot program. Social media, signs, public service announcements, etc. will be used to advise the public not only of the upcoming program, but to also explain the rules.

When asked about potential conflicts between users groups, and that many complaints were based on speed, Abbott said that the 15mph limit was based on the average speed limits used by other cities that specify a limit on their trails. Abbott said that during the pilot program the emphasis will be on education rather than enforcement, when possible. Abbott went on to explain that e-bikes have a computer display that shows various bits of information, and one of those is the speed at which the bike is traveling. And, while owners of traditional bikes may or may not use a similar computer on their bikes, Abbott said that 15mph on a bike was pretty fast and most cyclists would have an idea that they were going fairly fast. "If 20 mph is a reasonable speed for cars on our parks road," said Abbott, "then 15 mph is reasonable for bikes."

Local mountain bike group Medicine Wheel Trail Advocates weighed in on the topic of e-bikes on trails back in October of 2020, by issuing a statement with their opinion and suggestions on how to allow e-bikes on trails. MWTA Executive Director Cory Sutela stated earlier this week that the position of the group hadn't changed since the they made their thoughts known in the October statement. 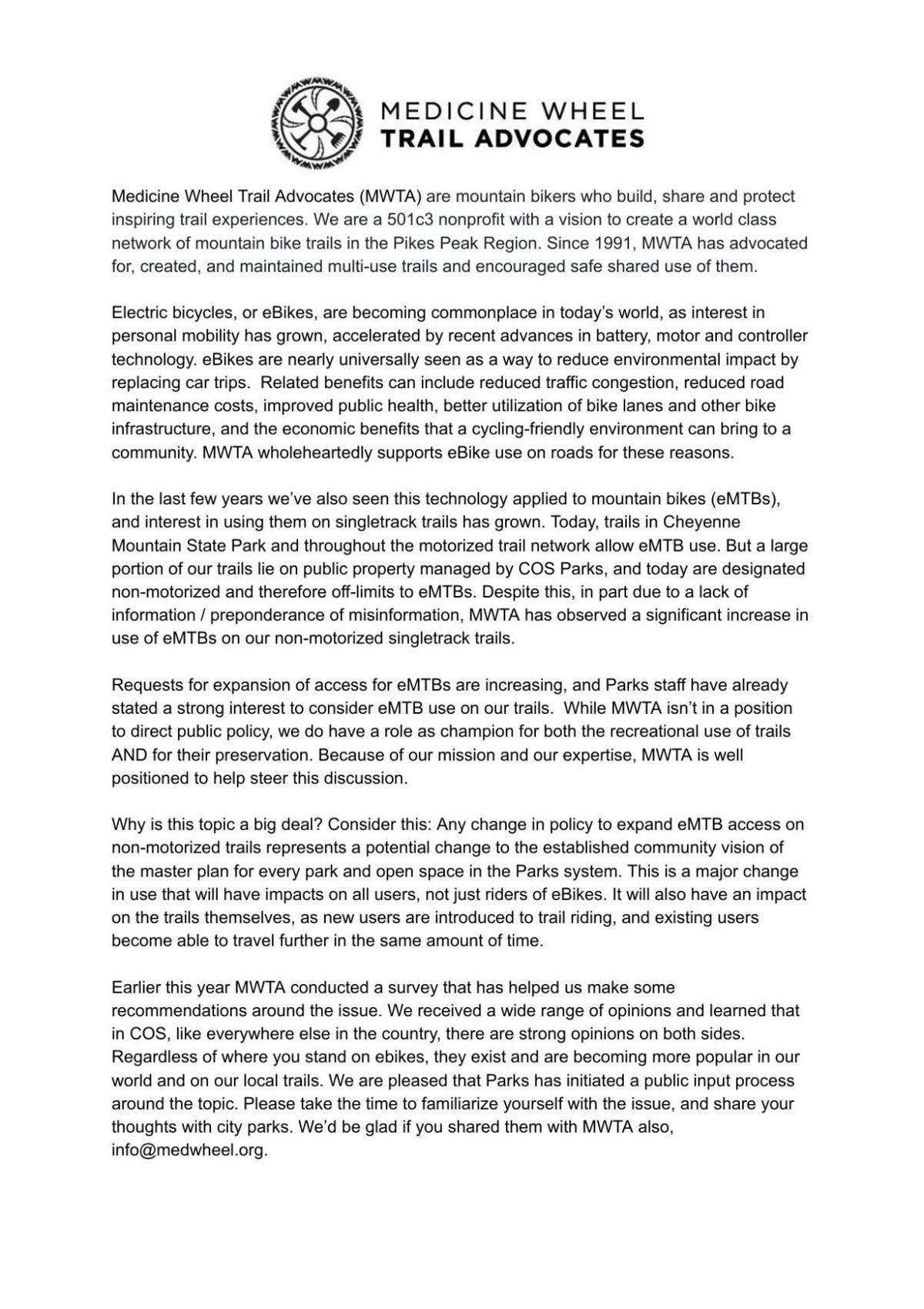 There has been some concern expressed by the public regarding the use of e-bikes on properties the city has purchased with TOPS (Trails, Open Spaces and Parks) tax money. The city's TOPS ordinance specifically states that "motorized" use is not permitted on TOPS-purchased properties, however, Abbott pointed out that federal law does not define e-bikes as motorized vehicles. In an e-mailed statement Abbott cited the following, copied in it's entirety:

"In conformance with legislation adopted by the U.S. Congress defining this category of electric-power bicycle (15 U.S.C. 2085(b)). CPSC rules stipulate that low speed electric bicycles (to include two- and three-wheel vehicles) are exempt from classification as motor vehicles providing they have fully operable pedals, an electric motor of less than 750W (1 hp), and a top motor-powered speed of less than 20 miles per hour (32 km/h) when operated by a rider weighing 170 pounds.  An electric bike remaining within these specifications is subject to the CPSC consumer product regulations for a bicycle. Commercially manufactured e-bikes exceeding these power and speed limits are regulated by the federal DOT and NHTSA as motor vehicles, and must meet additional safety requirements.

Here is the actual law: congress.gov/107/plaws/publ319/PLAW-107publ319.pdf Dictates the difference of calling it a "LOW-SPEED ELECTRIC BICYCLES" Vs a motorized vehicle."

Meanwhile, Colorado law seems to dictate that class 1 and 2 e-bikes are allowed wherever other bikes are permitted, but how that applies to "home rule" cities, such as Colorado Springs, is unclear. Colorado Parks and Wildlife follows that guidance in its state parks, while El Paso County Parks rules state "Class I and Class II Electrical Assisted Bicycles may use El Paso County Parks Primary and Secondary trails up to a maximum speed of twenty miles per hour. Class III Electrical Assisted Bicycles are not permitted on any County trail."

Susan Davies, Executive Director of the Trails and Open Spaces Coalition,  issued the following statement regarding the pilot program: "We're pleased that parks staff surveyed the public. As expected, people have strong feelings about e-bikes. TOSC's goal is for safer trails for all users. That means better signage, education and enforcement of speed limits on trails."

The pilot program will run from May 31, 2021 to May 31, 2022, at which time the parks department could decide to either adopt, modify or abandon the program.