This proposal is intended to replace a requirement enacted last year that everyone over the age of 18 have a hunting or fishing license while on a CPW State Wildlife Area (SWA), or state trust land (to find out why, click here). If approved by the CPW Commission at its March meeting, the new pass would be available for sale on May 1.

The requirement for a hunting or fishing license, instead of some kind of pass for recreational users, was due to rules that determined how the U.S. Fish and Wildlife Service dispersed funds, generated by excise taxes on firearms, to the states. Under USFWS rules, any fees charged other than for hunting or fishing in SWA's were deducted from the funds that the feds dispersed, resulting in CPW not gaining any ground in generating money for managing the SWAs.

According to CPW spokesperson Travis Duncan, the agency received notice from the USFWS last fall that fees charged for entry by recreational users would no longer result in a corresponding loss in federal funds. As an agency that receives virtually no tax funding, CPW is reliant on user fees and federal funding to function.

CPW formed a committee consisting of stakeholders from the commercial recreation industry, CPW, outdoor advocacy groups, hunting and fishing organizations and others to formulate some sort of SWA pass.

The results of the committee's work were presented to the CPW Commission at its Jan. 13 meeting by CPW Assistant Director Lauren Truitt. You can watch the discussion on the CPW YouTube channel here, starting at about the 5 hour, 34 minute mark.

In short, the committee recommended an annual SWA pass for a fee of $46.75, which is about the same cost as a yearly Colorado resident fishing license, (including required fees for a Habitat Stamp, Search and Rescue fee, and wildlife education fee), or a day pass for about $9. The proposal includes discounts for senior citizens, low-income users and youths, similar to discounts offered for fishing licenses. The SWA pass would be available online or anywhere hunting and fishing licenses are sold, and Truitt predicted that about 6,000 passes would be sold in the first year, valued at $276,000.

But not so fast, says the Colorado Mountain Club. According to CMC Conservation Director Julie Mach, who also served as their representative on the committee that created the proposal, the club feels that CPW is acting too quickly to implement the new pass, and is doing so without giving the public a chance to provide input on the proposal. CMC is also concerned that CPW is not taking into account how applying the pass requirement universally to all 350 SWA's may impact local communities. According to Mach, some SWA's serve as defacto trailheads for popular trails, with users being on an SWA for a short period of time. CMC doesn't feel it's fair to charge someone to pay a fee to merely cross an SWA just so they can access a trail that is not on state land. The CMC also feels that the proposed fee is too high, and that the purchasing of the Wildlife Habitat Stamp should be optional, not mandatory. You can read the letter they wrote to the Commission with their concerns, here: 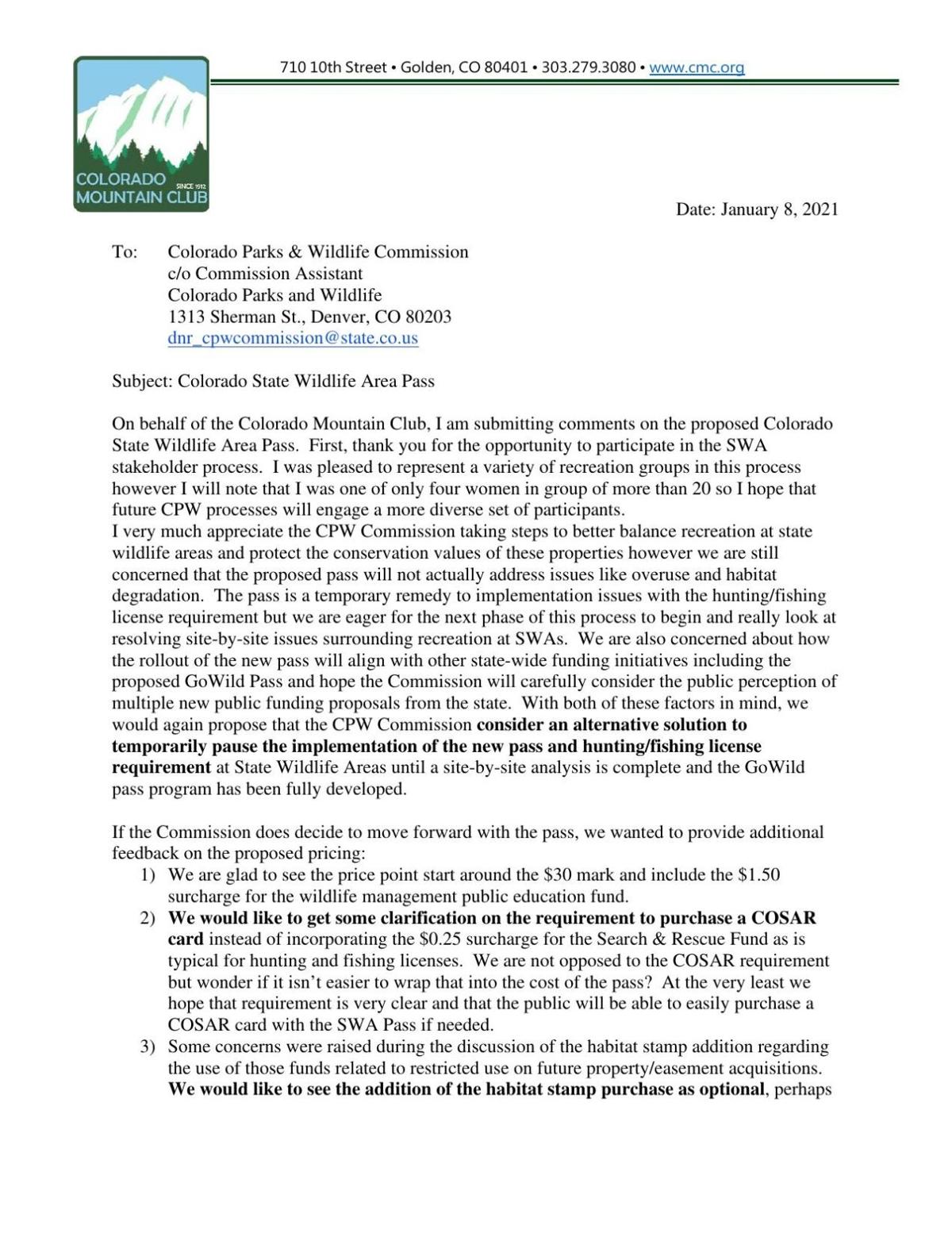 There are a number of questions to be resolved before the pass becomes a reality:

The burgeoning growth in the number of users on all of our public lands increases the need for funding to manage, maintain and preserve places like SWAs and state trust lands. To provide equity between those who traditionally paid to use SWAs, such as hunters and anglers — and the recreational users who, until last year, didn't — will continue to drive measures such as the State Wildlife Pass. The CPW Commission will take up this proposal again at its March meeting.

In other news, the El Paso County Parks Department is asking the public to review and comment on the master plan for the Sante Fe Open Space (formerly known as the Elephant Rock Open Space), near Palmer Lake.  The master plan is available for review on the parks department website, here.

Starting on Feb. 8, North Cheyenne Cañon Road (the paved road through the length of North Cheyenne Cañon Park) will be closed to all traffic on weekdays from the park's main entrance and up to Helen Hunt Falls. The closure will allow for a bypass to be built around one of the old stone bridges on the road that has been found to be unsafe and unable to support heavy vehicles, such as fire apparatus. The closure is expected to last up to six weeks.

The affected bridge, and others on the road, are scheduled for replacement in a project slated for the fall of 2021. You can learn more about the bridge replacement project here. On weekdays, users can access the park via the lot across from the Starsmore visitors center and hike in by way of the Columbine trail, or by way of connecting trails from Stratton Open Space, or from Gold Camp Road.

Be Good. Do Good Things.