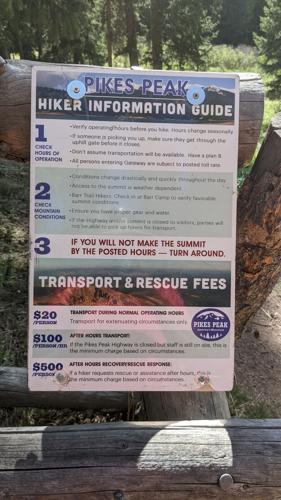 Despite what the sign says, you won't have to pay for a mountain "rescue." 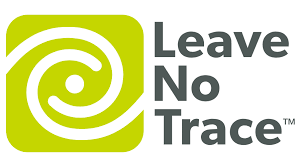 Signs posted at several popular trails around Pikes Peak have confused some hikers regarding who performs back-country rescues, and more importantly, who pays the costs. The signs, posted by Pikes Peak-America's Mountain, list good tips on how to safely ascend the peak, but then the signs point out trail users may have to pay hefty fees for a "rescue."

Two of the signs, one posted at the base of the Barr Trail and the other at the start of the Crags Trail on the peak's west side, seemingly are intended for those wishing to hike to the summit. Another sign, at the north end of Trail #704/Putney Gulch, seems out of place, since that trail doesn't go to the summit and is no where near the Pikes Peak Highway. The signs include the word "rescue" in big letters and state that there is a minimum $500 fee for "After hours recovery/rescue response. If a hiker requests rescue or assistance after hours, this is the minimum charge based on circumstances."

According to Pikes Peak-Americas Mountain Manager Skyler Rorabaugh, the signs are intended for people who hike to the summit without having arranged for a ride back down, or who don't time their hike well and arrive at the summit after the highway has closed for the day and their ride can't retrieve them. According to Rorabaugh, the signs were installed after the rangers made more than 190 responses to give hikers a ride down the mountain in one summer a few years ago, a situation he called "unbearable for the ranger team."

The fee, up to $500 for an after-hours ride, is intended to both encourage hikers to plan ahead and to recoup overtime and other costs incurred if a ranger has to respond when off-duty. Rorabaugh said he would consult with his staff and El Paso County Search and Rescue (EPSAR), the primary search and rescue group for the county, on either rewording the signs to indicate that the fees only apply within the purview of the Pikes Peak Highway rangers and/or move the signs to within their jurisdiction.

According to EPSAR spokesperson Brian Kinsey, the group is aware of the signs and the wording "caught our attention. We've been talking with the highway about the verbiage." Kinsey says EPSAR will "absolutely not charge for a rescue." He says that while the highway rangers will respond to emergencies on the peak and assist SAR, the rangers don't do technical rescue or provide emergency medical services. Kinsey says that, as a result of their conversations with Pikes Peak Highway staff, the wording on the highways webpage no longer includes the word "rescue" when describing these services.

Teller County Search and Rescue spokesperson Heather Davis also emphasized that the agency does not charge for rescues, stating "no search and rescue group in the state charges." She stated that TCSAR would respond to any incidents on the Teller County side of the peak.

Both Kinsey and Davis stressed that while the services of their agencies are free, additional services, such as an ambulance or helicopter ride to a hospital, could result in a fee from those providers. Both also stated that hikers should not hesitate to call 9-1-1 if they become lost or injured, since time is of the essence in making a safe and speedy rescue.

If you're planning on hiking to the summit of Pikes Peak, be sure to give yourself enough time to get there during the highway's normal operating hours and have someone ready to give you a ride down the mountain. If you don't have a ride, utilize the services of a commercial ride service, such as Rocky Mountain Ride.

A collection of 16 Colorado Springs parks and open spaces have been awarded Leave No Trace Gold Standard recognitions. It's the first time that multiple sites in a single system have been awarded the status at one time. More information, including which sites made up the Gold 16, can be found in the city-issued news release.

After months of accessing the Garden of the Gods Park main entrance and visitors center solely from the south, things are changing June 17. The massive road and drainage project on 30th Street will shift from north of the park to the south, accessing the park from 30th Street from the north. The closure from the park entrance (Gateway Road) south to Fontanero Street will last for approximately one year. More information is available on the city's website.

Be Good. Do Good Things. Leave No Trace.

Bob Falcone, a retired firefighter and USAF vet, is a photographer, hiker, outdoor advocate, Leave No Trace trainer, podcaster and book author . He has lived in Colorado Springs for more than 30 years.