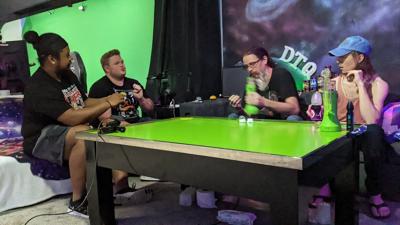 Deep in the heart of Colorado Springs, in a suburban neighborhood that looks like so many others, the 420-friendly DownToQuest broadcasts from a detached garage studio. Through a Comcast Business cable internet line, the crew of this adults-only streaming house play a variety of video games online and dab with viewers around the world, whom they call questers, 24 hours a day.

To the casual viewer, DTQ broadcasts may look surreal. Green-screened gamers float on top of game footage while a chat box waterfalls along the far side, its contents littered with strange custom glyphs, acronyms and automated messages. Psychedelic graphics contain channel statistics and Twitch handles while random animations pop on the screen. It’s a lot to take in, but those who get the hang of it eventually become questers. DTQ’s appeal isn’t just on the internet, but locally. DTQ ads have popped up around town and their streamers could be found at the Broadmoor World Arena last summer for the Colorado Springs Comic Con. The crew have even hosted in-person gaming tournaments as the world emerged from its pandemic coma.

DTQ began in 2015 as the dream of Kevin “Razor” Day and Nick “Toast” Morton to set up a streaming house alongside a popular streamer in town, Summit1G. With a streaming house, they could make a living playing video games, chatting with online viewers, cohabitating and having fun in the same place any time they wanted. Jack Tutko joined the duo with his experience in video production and design and DTQ became real in April 2017, hopping between rented houses before settling into their current location last year. While Razor handles the finances and Toast manages the social media, Tutko has nearly free creative reign in the studio and on the stream. Before sitting down for our interview, he took care to adjust a GoPro camera hanging off a massive television.

Tutko is ultimately the face of and ambassador for DTQ. Over the years, he figures they’ve had about 20 people come through the house as streamers. But success at DTQ requires a number of soft skills beyond merely playing video games online for a crowd. The team has let streamers go for “not providing enough value”. While DTQ provided room and board for its team, individual streamers had to cohabitate positively and help keep the house clean. On camera, streamers not only need to be charismatic and performative, they also have to engage with viewers in the online chat while playing the games and producing the content that grows their audience. In DTQ’s earliest days, this meant playing a lot of Fortnite, the internet’s most popular shooter, sometimes begrudgingly. They recently let a streamer go who noodled with his guitar on camera for hours. “I would pay someone who could play the guitar really well for five to six hours, but not that,” Tutko says. Because Twitch has no algorithmic discovery tools to recommend your content to others, any time not spent streaming means that your channel isn’t growing. This ultimately set the crew up to stream 24 hours a day, appealing not just to night owls, but international viewers as well.

The DownToQuest name was a very deliberate play to gamers and tokers alike, but making their content accessible to adults only was a risky one. “DTQ wasn’t always about 420 use,” Tutko says. Live marijuana use skirted Twitch’s Terms of Service, but it meant locking out the massive 13-17 year old demographic that other streamers rely on financially. They periodically ban underage viewers from their channel and their Discord, a chat app originally designed for gamers.

Twitch ads and monthly subscriptions from questers are DTQ’s largest revenue source, but the crew use their own custom cryptocurrency, QuestCrypto, as a way to diversify their income. Through the creator-oriented crypto service Rally, DTQ mints their own coins and earns royalties through subsequent transactions. The house regularly plugs QuestCrypto in their streams and social media, but they and Rally warn that their digital coins are not designed as a means to make money like so many other cryptocurrencies were created for and hyped up to do. While platforms like Twitch offer binary options for financial support, you buy in or you don’t, DTQ’s bet on crypto allows people to purchase and sell their proprietary coins without directly affecting their financial livelihood. But QuestCrypto doesn’t exist in a vacuum; it rides the same broad trend lines as other cryptocurrencies.

The COVID pandemic and the rise of cryptocurrency benefit DTQ in 2020. The crew and those invested in QuestCrypto were able to profit immensely as it peaked above $40 a coin. But as lockdowns and restrictions eased, people spent less time watching content online and DTQ’s Twitch traffic waned. Then, as interest in cryptocurrencies cooled, QuestCrypto fell as well. Today, you can buy a QuestCrypto coin for just $2.

Two months ago, DTQ told their trio of contracted streamers that they could no longer afford their room and board and they would need to acquire separate employment to pay rent at the house. This immediately put more of a burden on the site’s co-founders, who already put more than 50 hours a week into the operation on camera alone, on top of the behind-the-scenes work. DTQ may eventually limit their 24/7 operation for the mental health of their streamers.

But DTQ recognizes the most important thing they’ve built is a community. “It’s all about the chat for me,” Tutko says. The streamers get to learn about the jobs, hobbies and lives of questers through the chat box, through the games and through their Discord. Jack gets emotional as he describes that the stream becomes a way for questers to forget the drudgery of everyday life and escape to a place where they can have a dab with some friendly faces.

As our interview concludes, Tutko retrieves something to eat from the studio microwave. He plunks down into a streaming station, ready to start the next 8-hour broadcast.