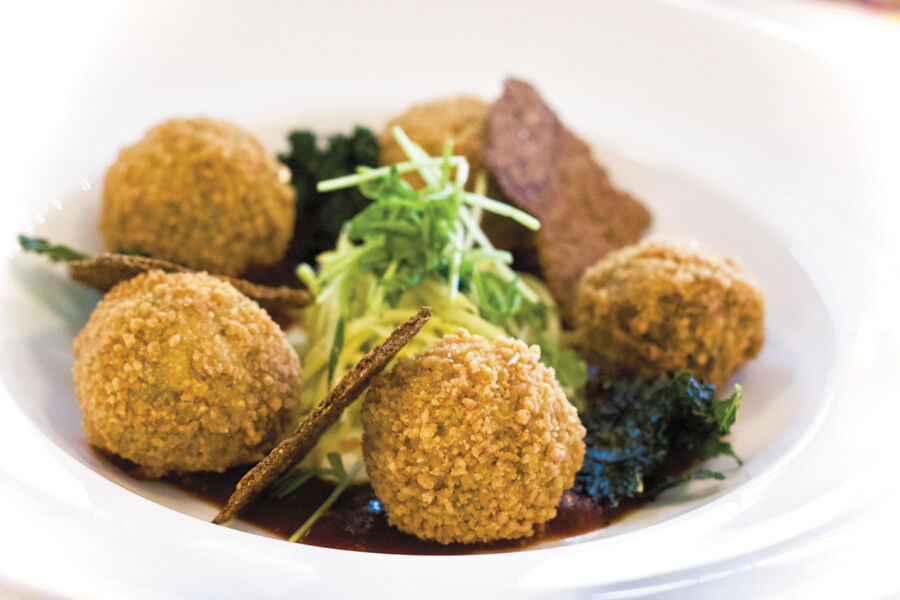 The vegan, gluten-free arancini are crispy, earthy and just about perfect. 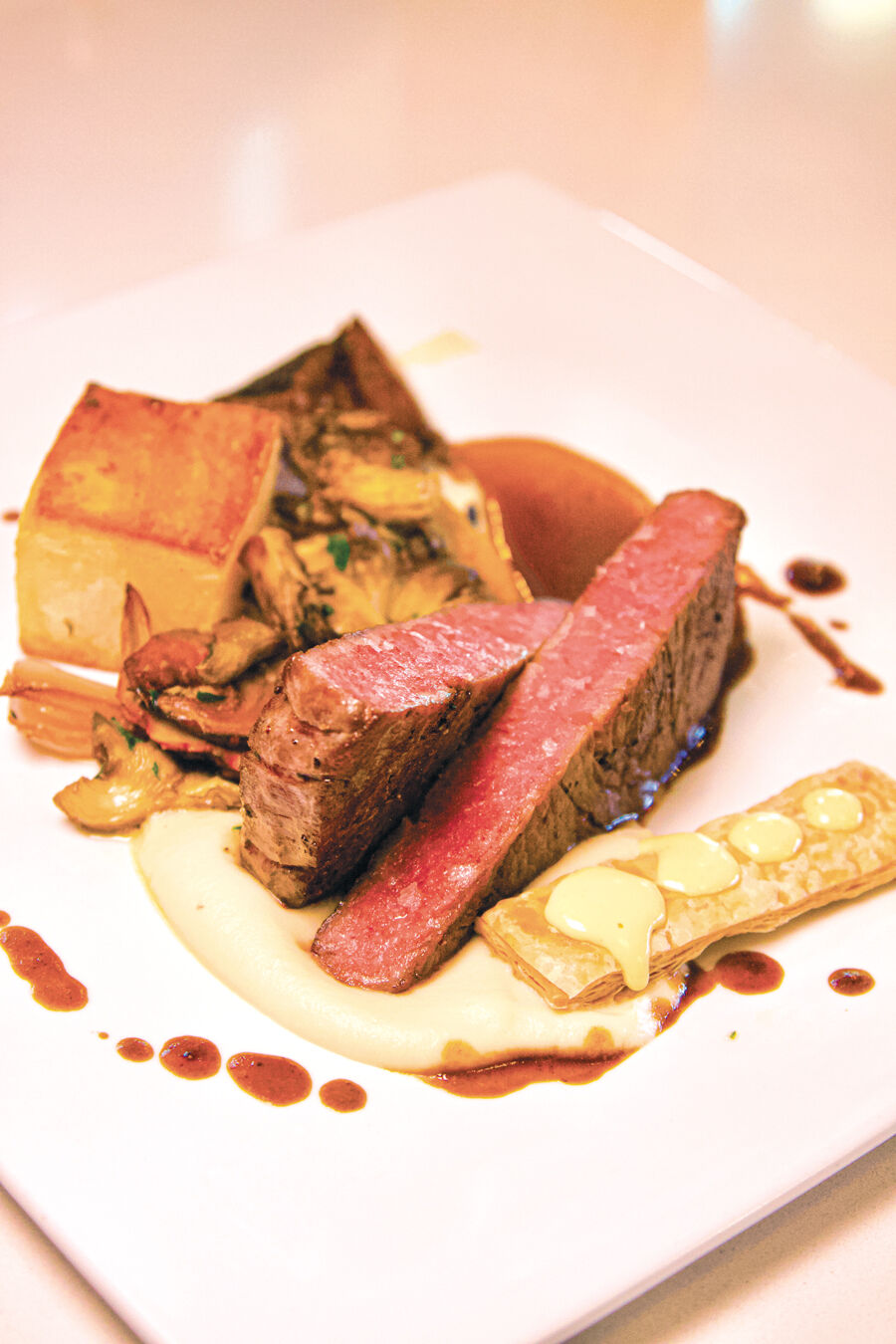 If we had stopped at our pair of cocktails and first appetizer, we’d have left Till feeling pretty good about our experience. A gorgeously presented plate of arancini spins the traditional Sicilian rice/cheese balls masterfully. The crispy breaded orbs yield to a soft interior of risotto and earthy mushrooms; balsamic-tomato sauce lends the contrasting acidity and shredded squash some simple lightness; thin flax crackers snapped into rough rectangles gift odd angles and crunch; and Moroccan-seasoned kale adds an interesting North African flair that flashes and fuses well into the surrounding flavors. Kudos: The vegan/gluten-free dish doesn’t lack for anything.

The Flying South cocktail feels like the perfect accompaniment to a 90-degree evening, light with silver tequila sweetened by lavender syrup and luxardo cherry and soured by lemon juice. It’s herbal-citrus delicious, if a toe over the line into too much sweetness that buries the booze a bit. The Down the Alley bourbon-Campari-Averna drink sips similarly sweet while evoking an Old Fashioned, partly because of an orange wedge garnish, and also with the amaro and Campari playing the bittering role, with a bonus of botanical essence. My only major gripe: $14 price tags when the booze in play comes in mass-market bottles that you can nab easily for under $20, not a fine regional craft option or rare brand. It’s the price of a craftier, more complicated concoction at dedicated cocktail bars locally and in Denver. Why the upcharge?

A recap for the uninitiated: Till is operated by parent company Altitude Hospitality Group, which among many other ventures locally operates Garden of the Gods Market & Café by day out of this same space, the former Coquette’s Bistro. (See our June 2, 2021, review of GoGM&C.) Till originally launched in June 2016 at Prominent Point on the far north side of town, pushing the boundaries of excess in a 17,000-square-foot, $13 million building. The focus then was farm-inspired local cuisine with an attached retail market, bakery, pizza kitchen and coffee shop. By December of that year the coffee and bakery had gone bye-bye, and in the fall of 2019 the company announced Till would relocate by the following summer, the old space becoming a gaming spot called North Side Social. The pandemic partly hindered its potential success, but Altitude continued to hinge hopes on an explosion of interest in pickleball. Then, recently, it scrapped all that, and the latest news we’ve heard from founder and manager Mitch Yellen is to expect The Pinery North by mid-October.

Suffice to say, Till comes from a troubled past. “If you’re thinking you’re building something too large, talk to Mitch,” Yellen joked with me at one point. But he also held his footing, laying part of the blame on our populace: “Overall, not enough people were willing to pay for good quality food,” he said. I could digress into a study of Springs socioeconomic factors, but I tend to agree with the sentiment, as our town continues to support chain fare (at no great value savings) versus independents.

That said, when we choose to pay for the good stuff, we expect a good bang for the buck and pricing that’s justified. Sure, charge more if it’s heritage breed meat, or special small-farm products or killer creative food that’s laborious and technique-focused. But if the price is high just ’cuz the setting’s swank, I have a problem. And that may be part of the issue with Till’s latest incarnation, where Yellen has been avidly promoting his head chefs as having worked at Michelin-starred restaurants. Not to take due credit away from them or sound overly mean, but there’s a difference between working under someone with stars and earning your own; and that difference is discernible on the plate.

Our second starter, for example, reads beautifully by description but doesn’t deliver all the flavors in harmony: venison tartare with cured egg yolk, blackberry vinegar, smoked shallot purée, walnut and caper ketchup and arugula aioli. Yes it’s gamey and will challenge some palates, not as easy a raw bite as beef, and the smoke does show up even if the berries don’t. We want to like it more than we do. But firstly the presentation stumbles, with a puck-shaped mound of meat on one side of the plate and a long stretch of the fine-diced bits on the other in a shape we immediately associate with a turd; once you see it, you can’t unsee it, and no that’s not table-talk appetizing. The dots of saucing playfully flanking the protein can’t save the day. Side taro chips are too thin and delicate to stand up to the strong flavor, feeling mismatched, and the bread set at the table feels a day old, somewhat stale, with an oxidized, hard crumb and little flavor, also receiving the meat poorly. (It should be Nightingale Bread quality at a place like this.)

For our entrée we go big with the price-topping Akaushi New York Strip (that being a Japanese Wagyu breed also prized for its marbling) for $42. Not because we were living large, but because we are drawn in by the descriptors of side items like salted caramel shallots and bone marrow butter poached potato. Yum, tell me more… wild mushrooms, puff pastry, celeriac purée, Dijon aioli and Laughing Lab jus. Cool, they worked a beloved local beer into a hoity-toity dish, showing some frivolity to break up evident stodginess elsewhere. And the presentation is back on point, quite geometric and artful really, with the potato perfectly formed into a cube, the steak jutting up with triangular cuts from the purée, the mushrooms and shallots strewn about capriciously in the jus and dots of drippy aioli lining a long rectangular puff pastry segment.

So what’s our beef with it? Well the portion is surprisingly small and we don’t find superior fat or flavor on the otherwise notably tender cut. (I don’t always find comparisons fair or useful, but a recent meal at Mood Tapas Bar since its new chef arrived impressed us more with both Wagyu tartare and filet plates at better relative prices and better overall flavors.) This feels like just a steak. The potato cube is lifeless.

I swoon for bone marrow generally but detect none. The purée is fine and the mushrooms an independent treat, but we discern zero salted caramel on the shallots. I guess we were expecting a rich candying of some sort; maybe it’s a menu misprint that should have said “caramelized” but still there’s no great char toward extra sweetness. The pastry is just a texture more than a taste contributor and the jus is just serviceable, not remarkable. All told the dish doesn’t deliver on the sexy modern presentation; close my eyes and it tastes institutional, stuffy, safe.

Because we aren’t lost in a fantastic flavor experience, we start to take more note of the ambiance. Like the plate, it’s opulent and inviting at first. Then we notice our sight line from a bench seat in the main dining room directly into a wait station; that’s Garden of the Gods Market & Café, not Till. Another sight line takes us into the bar, where overhead TVs show football, transporting us away from a fine dining setting and making this feel like a hotel bar. A large group occupying a table near us, still wearing their lanyards from the Space Symposium, cement that vibe. Loathsome soft jazz Muzak plays overhead. It’s like this place is trying to be high end and casual simultaneously and loses itself along the way in the middle. It’s incongruent. I’m paying over $40 for a steak, but don’t get a silverware reset ahead of its arrival. I pay $16 for a glass of pinot that I find online for $16 a bottle. I understand markup, but this is madness. Maybe someone on a company expense account won’t care, but I can’t recommend this to a friend of modest means for a worth-it date night.

We conclude with a fulfilling cappuccino from Hold Fast beans and another appealing plate, a deconstructed sweet potato pie. I question $14 for its size, but there’s no complaint over sweet potato ice cream, pecan baklava and a plump, square torched marshmallow all drizzled with smoked caramel, all tasting like fall arrived early. We also nab a coconut lime cupcake from the market, filled with lime curd in a lime chiffon cake and topped with coconut mousseline cream (two-to-one pastry cream and butter) and a sprinkle of toasted coconut. The spongy, light cake tastes great and citrus strong, but we don’t really taste any coconut, missing the typical glory of that island-y fusion.

So again, we find ourselves pondering pricing, $5.50 in this case, and another pretty item that doesn’t entirely deliver on its promises. My critic colleague, when they dined at Garden of the Gods Market & Café back in June, dropping over a hundo at a modest brunch, summarized that it “wants only for a little more thought and refinement,” with “everything off in minor ways that lessen the experience.”

It would seem that much is consistent between day and night shifts. Since I’ve already delved into comparisons at the price point, I will say this isn’t how we’ve felt walking out of Broadmoor eateries, Ambli Global Cuisine or Cowboy Star. Sticker shock is easily abated by high quality that hits all the marks, truly delivering a transportive experience.

Four years later, displaced and weathered by identity crisis, Till doesn’t seem to have found its heart yet, or its market. Or maybe it has, and we’re the fish out of water. I see the staff carry several bottles of wine by to pop at tables, so the vino’s flowing. The space crew appears to be having a blast. People are seated at the bar watching those TVs. Everyone else appears content enough. And if we’d just stopped after cocktails and the arancini, I believe we would be too.