Colorado Springs School District 11 Superintendent Dr. Michael Thomas has agreed to “mutually separate” with the district, effective immediately, D11’s board of education announced during a special meeting at 7:30 p.m. on March 2.

All board members voted in favor of approving Thomas’ separation. He "expressed a desire to pursue a mutual, amicable separation," Board President Parth Melpakam said during the meeting. The board appointed Dan Hoff, D11's executive director of school leadership, to serve as acting superintendent until an interim is selected.

Neighbors for Education, a D11 parents group that advocates for equity and access to public education, has “long feared that the newly elected D11 Board of Education would force Dr. Thomas out of his position,” it said in a statement.

“This change in leadership negatively affects our community and will impact our students most,” the Neighbors for Education statement said. “We are concerned that our School Board, who claims to make effective use of our budget, will be paying a new Superintendent while at the same time paying out Dr. Thomas’s contract. We believe the terms of his exit should be made public immediately. We are concerned that our administration, staff, and students have already experienced enough change with the pandemic and radical views of some Board Members, and now must work through the coming chaos that a new superintendent brings.”

Lauren Nelson, Dr. Sandra Bankes and Rev. Al Loma were elected in November as part of a right-wing slate which saw the D11 board move to a conservative majority. All three had campaigned on anti-equity platforms — and it was clear that the conservative board members and Thomas did not see eye-to-eye about how the district should address academic performance when D11’s Diversity and Equity Leadership Team was dissolved one month after the new members were seated.

The D11 board met twice in private executive sessions since Feb. 23 to discuss “legal advice” on Thomas’ contract, sparking alarm among parents, teachers and community members, who had been flooding board meetings and public comment sessions since the new board was seated.

Thomas, who came to Colorado Springs from Minneapolis Public Schools in July 2018, took the reins at D11 at a time when multiple schools were struggling to meet state academic achievement standards and were put on performance improvement plans by the Colorado Department of Education.

Thomas was hired by D11’s previous board to spearhead a turnaround in the district, which has been losing enrollment for more than a decade. Mitchell High School was designated a “priority improvement” school by the department in 2016, and was at risk of state takeover or closure.

“It was very clear there were two things the board really wanted to focus in on,” Thomas told the Indy in August 2021, as Mitchell embarked on a massive staff rebuild. “We had been losing enrollment for 10-plus years, and in addition to that we needed to look at our full, core academic programming.”

With D11’s high student poverty rate and a majority of enrolled students from historically marginalized communities, Thomas focused on equity for those students as a key strategy to address achievement gaps.

The district’s equity policy, adopted in May 2020, said D11 would support equitable — and not necessarily equal — allocation of funding, diverse hiring practices, “culturally responsive” curriculum and training for staff about historic achievement inequities between white and nonwhite students. Thomas has emphasized looking at metrics other than standardized test scores to measure student success, like attendance and engagement in the classroom.

“This district, being the center, urban core district, has always been the one of the most diverse districts in the region,” Thomas said in an interview with the Indy last week. “They've had to be responsive to the unique learning needs that come by various student demographics.

“Equity is giving every student and staff what they uniquely need to be successful,” he said. “I've said it from day one of being here.”

Conservative lines of attack against Thomas’ performance have focused on data — some of it inaccurate — from D11 students’ scores on the Colorado Measures of Academic Success tests during an unstated timeline.

At the March 2 meeting, Director Julie Ott pointed out that the previous board "didn't just ask — we demanded an equity policy, and I would like to be very clear about that with our public. We demanded it. ... And so for you to be skewered by our public for some nonsense about [Critical Race Theory] is incredibly frustrating, and I apologize.

"Performance issues — people have been using 2019 data," Ott added. I would like to point out that Dr. Thomas was hired in 2018. We got the mill levy override money that fall, and you had less than nine months to change the data before 2020 rolled around — and we had the pandemic, and then we have no data. So to everyone who has used that information against you, I’m sorry, but it’s really not accurate. ...

"It is with a heavy heart that I’ll say goodbye," she said. "I am very sad about this. But I’m also angry because of all the misinformation."

Neighbors for Education’s statement said the group expects “President Melpakam and the Board of Directors to acknowledge the negative impact their decision has produced. The Board must work on its own leadership and work to hire a new superintendent who will help stabilize the district and who will work to serve the educational interest of EVERY student.”

Michael Williams, a co-founder of the group and a D11 parent, said Thomas’ legacy of “community-based fighting for equity” in D11 is “incomplete.”

“I have a lot of respect for Dr. Thomas and what he did, and what he was trying to do,” Williams said. “Because of COVID, they laid a lot of these things that were out of the district's control — out of most people’s control — at his feet, when this conservative majority took over. But Dr. Thomas was doing the work anyway. He's done phenomenal work.”

A letter from D11's board about the separation said Thomas will receive 14 months of severance pay and health benefits. Based on Thomas' current contract, that adds up to be about $295,815, plus the cost of health benefits.

"A formal search for a new superintendent will begin shortly, the process for which will be determined by the Board in the coming days," the letter stated. "Communications regarding search-related developments will be forthcoming." 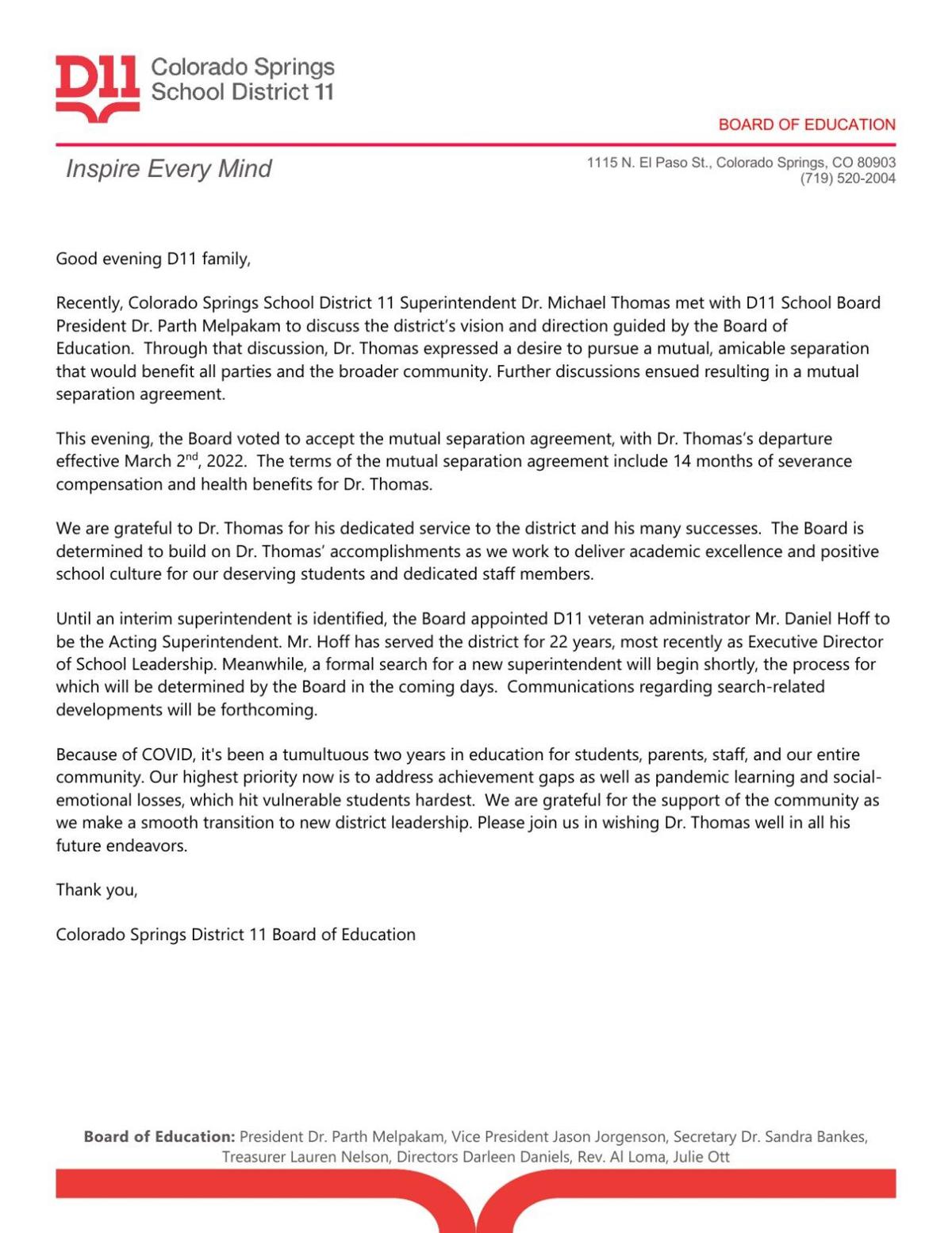