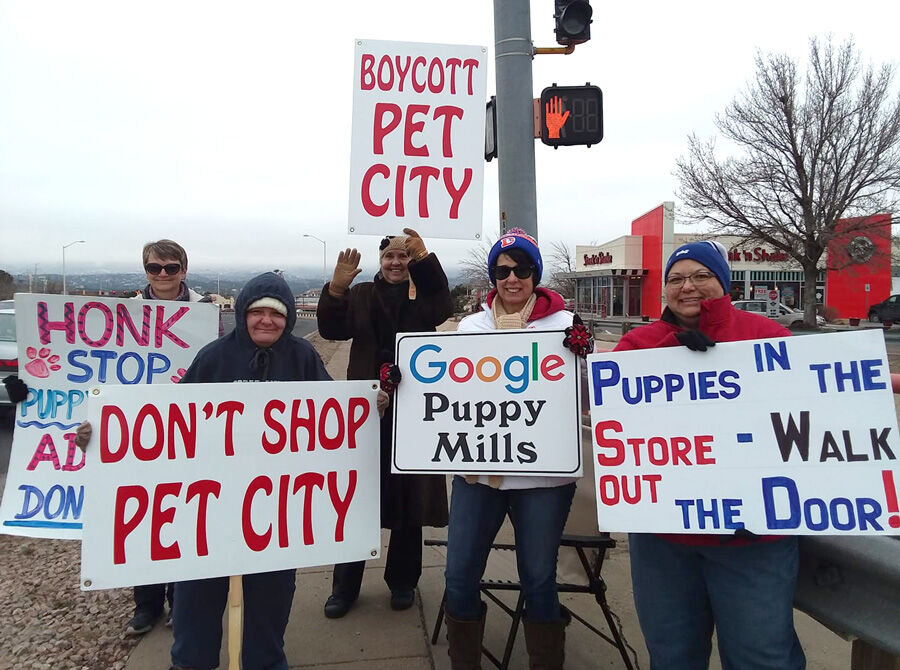 Critics say puppy mills over-breed dogs, with many of their pups ending up for sale in pet store displays like this.

One of the first ordinances the new City Council may be asked to consider is a law to ban the sale of cats and dogs from “puppy mills” or large-scale dog breeding operations. Opponents of puppy mills, including animal welfare nonprofit Bailing Out Benji and the Humane Society of the United States, allege that most puppy mills keep dogs in unsanitary conditions and over-breed them. Dustin Haworth, who, along with his sister Bree Maestas, owns the two Pet City stores in Colorado Springs, says this legislation would put him out of business.

“Essentially what this does is it would make it unlawful for a pet shop, after Jan. 1, 2022, to sell cats or dogs unless they’ve been basically procured from an animal rescue organization or a public animal control shelter,” explained Mark Smith from the City Attorney’s office during a Feb. 22 City Council Work Session. “As part of that process, there would be documentation that would be required to show where the cat or dog was received from by the pet store. Also, this contemplates a violation would be punishable by a $500 fine.”

Such ordinances are not new. In 2019, Berthoud, Breckenridge, Frisco, Dillon and Eagle passed laws banning the sale of puppies and kittens in pet stores, but these were considered “preemptive” laws — none of those municipalities actually had pet stores that sold puppies or kittens. Rep. Matt Soper, R-HD54, and Rep. Monica Duran, D-HD24, have introduced similar legislation, albeit unsuccessfully, at the state level during the last legislative session. Soper and Duran’s bill, the Humane Pet Act, received pushback from lawmakers and pet store owners and ultimately died in committee in 2020. This year's legislation, HB21-1102, which addresses consumer protection and transparency measures for pet stores that sell dogs and cats — but would not ban the sale of dogs or cats — is currently under consideration in the senate.

Vicki Allinger, the Colorado team leader for Bailing Out Benji, says such legislation is needed. “[Mills] put profit above the health and well-being of the breeding dogs,” she says. “They get little to no vet care, very low-quality food. They end up with a lot of health issues, and a lot of those are passed down to the puppies.”

While professional breeders are required to be licensed and inspected by the U.S. Department of Agriculture, Allinger says such regulations only provide a survival-standard of care for the animals, and that breeders are often cited for failing to maintain those minimum standards, including breeders that supply puppies to Pet City. “I just went there myself on Wednesday [Feb. 24] just to check it out and see how things were,” she said. “I inquired about a little Maltese puppy, 8½ weeks old. When I inquired about this dog, his breeder was John Bontrager out of Wisconsin, he has a history of violations and as of Feb. 2020, he had 74 adult breeding dogs and the local stores received 50 shipments from him in 2019 and 2020. In Oct. 2018 he received an official warning from the state of Wisconsin due to several deficiencies at his kennel. Those include a Maltese with periodontal disease, in need of urgent dental care, dogs with matted fur, excessive feces on the floor in nine enclosures, and the solid resting areas in two kennels that were soiled in excrement. I was told by the staff there that he was the breeder of this dog.”

Haworth noted that he regularly invites members of the public and council to attend virtual tours of his breeders, and that provides information, including photos, on the breeders to customers upon request. He points to the Canine Care program, which according to the Purdue University College of Veterinary Medicine is “a nationwide, voluntary program that addresses the health and overall welfare of dogs in the care of breeders in the United States. It is the only program that not only incorporates measures of the physical health of dogs and puppies raised by breeders, but also strongly emphasizes their behavioral well-being.”

Haworth said Canine Care is a better model than the legislation proposed by the Humane Society of United States. “The canine care act is probably the best, third-party, voluntary, standard-based scenario that we can do,” he said. “Currently we have 26 of our roughly 100 breeders that are Canine Care certified.”

Allinger points out that puppy mill ordinances are also a matter of consumer protection. “You could take him home today for the lovely price of $6,000,” says Allinger of the Maltese puppy. “They work with several different predatory finance companies,” she says. “One of them is a company called LendMark, and I could have financed that dog for 60 months, just like a car. The payment would have been $163 a month, so that would have made that $6,000 dog end up costing you $9,780 dollars. Another one is United Consumer Financial Services. That one would finance for up to 36 months. That monthly payment would be $218, so that’s a little bit more reasonable. It would have been $7,848 for the dog.”

Haworth said customers know what they’re getting into before they leave Pet City. “At the purchase time they get the contract printed out,” he said, “just like they would at an auto dealership, and review the whole interest rates and the whole payoff and the amounts and can still opt out of purchase at that time.”

The main proponents of this city ordinance are at-large councilors Tom Strand and Bill Murray, who recently held a town hall about the proposed law on March 25. At-large Councilor Wayne Williams was the proposed legislation’s most vocal critic. “Essentially this picks on two businesses and allows anyone else to do whatever they want to,” he said. “It’s not grounded in the welfare of animals. It is instead designed to create a market that benefits certain breeders and penalizes others. I find it wholly inappropriate and do not support this ordinance.”

Disclosure: Heidi Beedle is a former employee and current volunteer at the Humane Society of the Pikes Peak Region.

Editor's note: An earlier version of this story claimed that Rep. Soper's current legislation, HB21-1102, also died in committee. As of April 9 it is still under consideration. We regret the error.