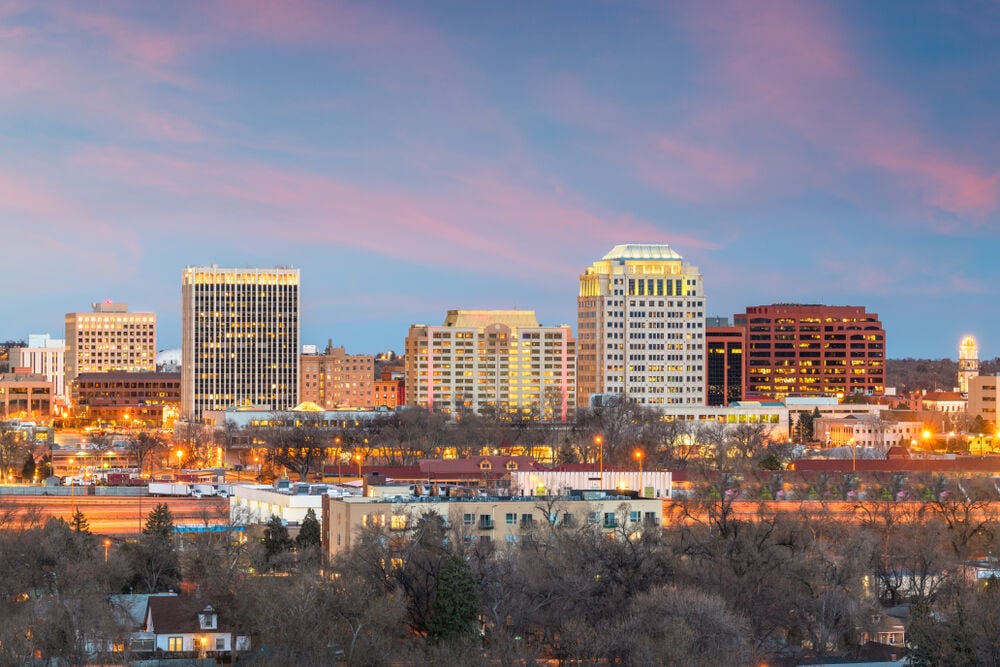 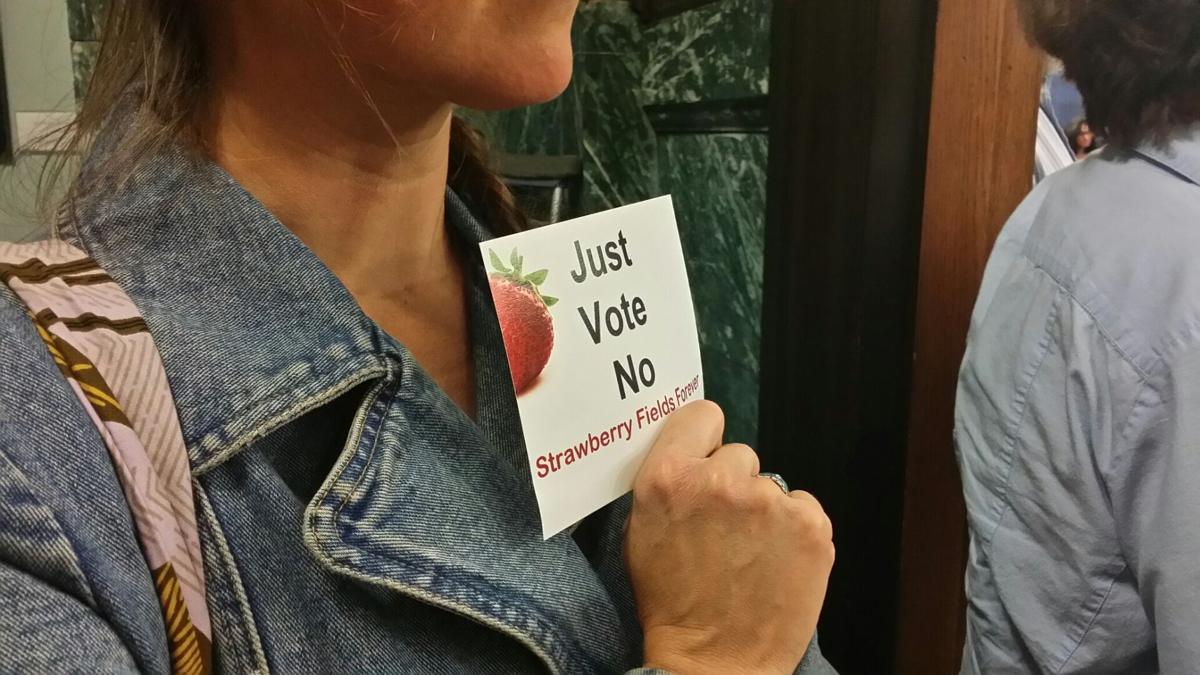 An opponent holds a sign during the May 24, 2016, meeting at which City Council voted 6-3 to trade Strawberry Fields to The Broadmoor.

An issue committee has formed to support Mayor John Suthers' ballot measure to keep more revenue than the Taxpayer's Bill of Rights (TABOR) would otherwise allow. Meantime, backers of the "real" Protect Our Parks will try to push their measure despite a lack of funding.

Priorities CoS filed a campaign finance report Sept. 1 for the month of August showing it's raised $5,255 so far, $5,000 from Colorado Springs Forward, a business activist group that hasn't yet filed a report showing the source of its funds this election cycle. 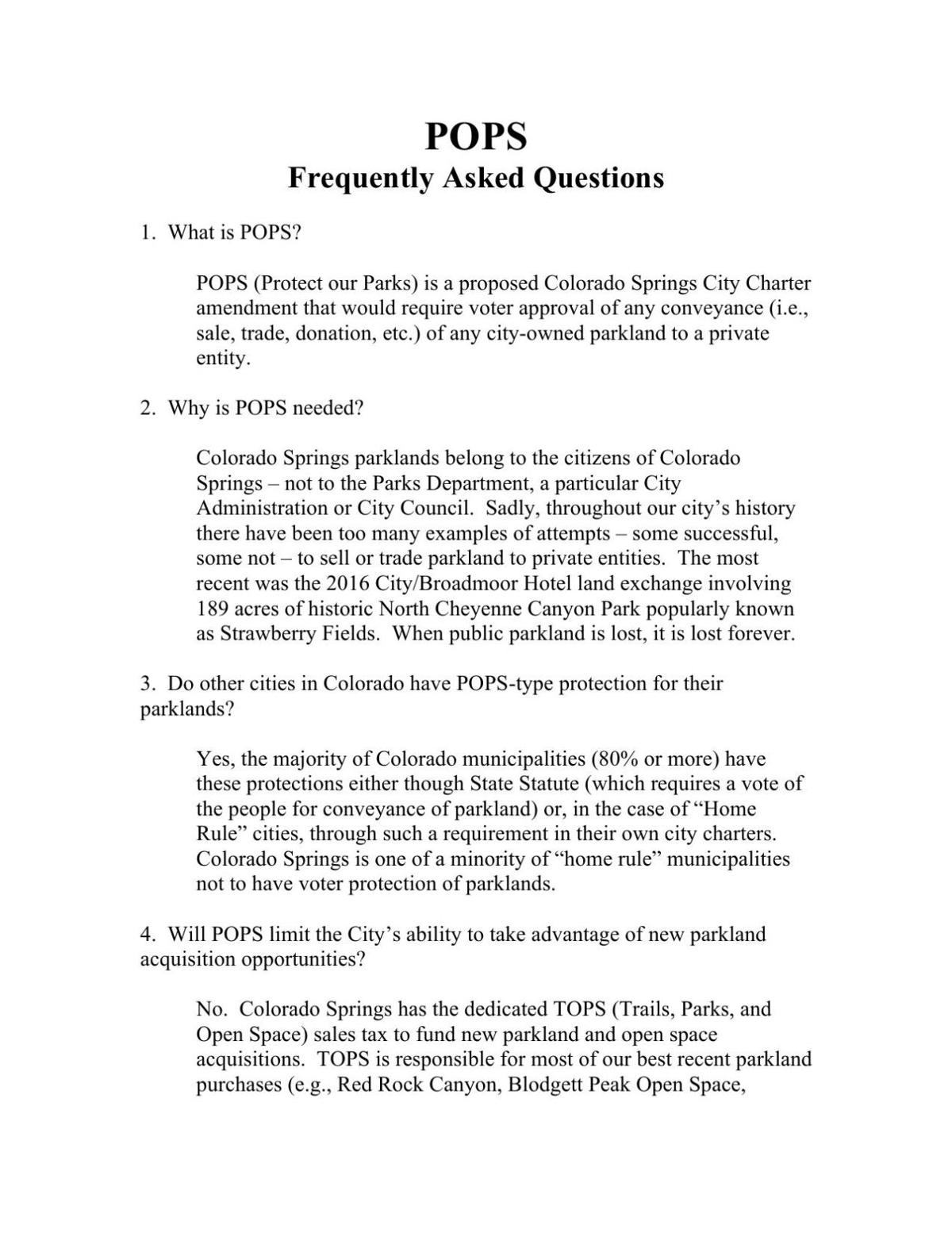 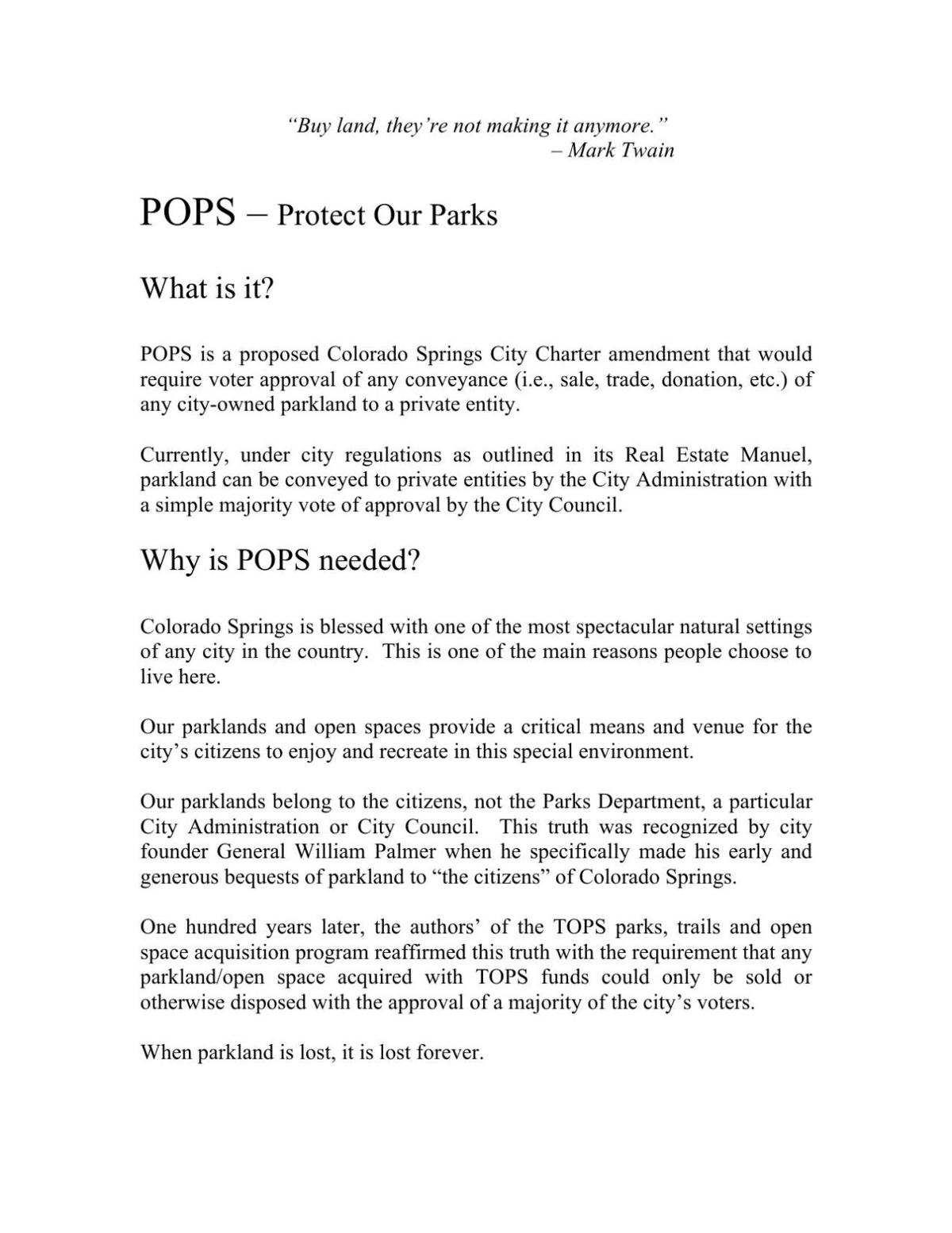 The Priorities committee will campaign for voter approval on Nov. 3 of a measure proposed by Suthers and referred to the ballot by City Council.

The measure, called 2A, is labeled TABOR Revenue Retention and Revenue & Spending Limitations, but the measure really asks two questions.

First, it seeks permission to keep $1.9 million collected above the city's 2019 cap imposed by TABOR, which limits new revenue government entities can collect based on a formula that considers population and inflation. Excess revenue must be returned to voters unless voters allow a government to keep it. That $1.9 million would be spent on public safety.

Second, the measure asks voters to "reset" the TABOR cap at the 2019 level, because 2020 revenue is expected to fall below that due to the COVID-19 pandemic, which caused widespread shutdowns of businesses and, hence, tax revenue suffered.

The Rachel and Anthony show

Rachel Beck is the consummate insider with connections to the media, government, business an…

The Priorities CoS campaign is being run by Anthony Carlson, who helped run the campaign for Colorado Springs School District 11's mill levy override ballot measure in 2017 that won voter approval.

He serves as executive director of Peak Partnership, a civil rights advocacy group founded in 2017. It's mission is to operate "exclusively for the promotion of social welfare by developing and advocating for legislation, regulations and government programs to improve the environment, protect natural resources and stimulate the economy, informing the public by education methods on the public interest and concern of education, and conducting research and publicizing the position of elected officials concerning these issues....," according to its 2018 IRS Form 990.

The other two donations came from Carlson ($105) and Shawn Gullixson with Vectra Bank ($150). It's likely that more businesses will contribute in coming weeks, based on other ballot measures promoted by Suthers in the past. Also, Colorado Springs Forward has been known to pump massive amounts of money into Suthers' ballot issue campaigns.

Issue 2B was proposed by the same group of people who formed Save Cheyenne to oppose the city's land swap with The Broadmoor hotel that traded away 189-acre Strawberry Fields open space in exchange for a few hundred acres of trails easements and remote forestland in 2016.

This measure, termed the "real" POPs measure, would require the city to obtain voter approval to convey park land, after a 7-2 majority of City Council refers the measure to the ballot, except those transfers required for utility rights-of-way, court orders, eminent domain and title disputes.

Save Cheyenne leader Kent Obee tells the Indy via email the 7-2 vote requirement by Council in 2B "actually raises the bar — making it that much harder to even do a land swap ballot referral. If there is no referral, we don't even get to the vote of the people and the swap can't happen."

But Obee and other 2B supporters hope the 7-2 requirement doesn't confuse voters into thinking the two measures are alike, because they are not.

Issue 2C would require only a 7-2 majority of City Council to transfer city-owned park land into private hands, and voters would get no say. It was proposed by Councilor Wayne Williams.

Whichever measure gets the most votes will prevail.

So far, no campaign committee has filed campaign finance reports to support either parks measure, although Save Cheyenne has recently converted from a 501(c)3 nonprofit to a 501(c)4, political action committee, and was renamed to Protect Our Parks — POPS, according to an email from Save Cheyenne leader Kent Obee to supporters.

Obee notes the committee has a "very small" amount of cash to fund a "vote yes" effort and urges supporters to circulate fact sheets about 2B, which are available below.

"It certainly can be argued that this [2C] is an improved level of protection over a simple 5-4 [Council] majority, but it also still leaves decisions about parkland conveyances in the hands of the bureaucrats and politicians," Obee says in the email.

"Our basic premise throughout has been that our parks and open spaces belong to the citizens of Colorado Springs, that they should have the final say in any disposition of these lands -- and [that] when such lands are lost, they are lost forever," he adds.

As he tells the Indy, "It has been a long and twisted path to get to where we are now."

Watch for your ballot in the mail starting on Oct. 9. The Indy's endorsements issue will be published Oct. 14.