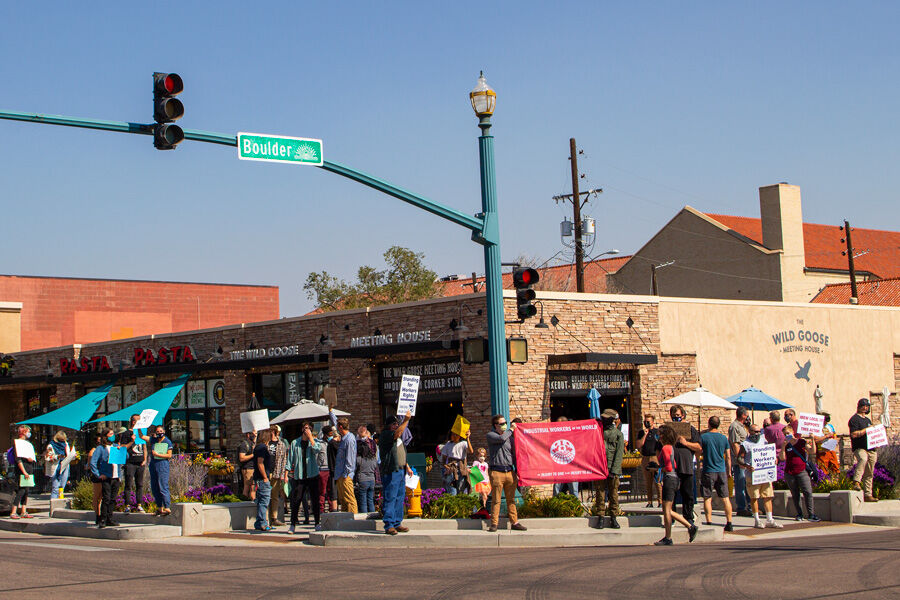 Picketers outside the Wild Goose Oct. 7 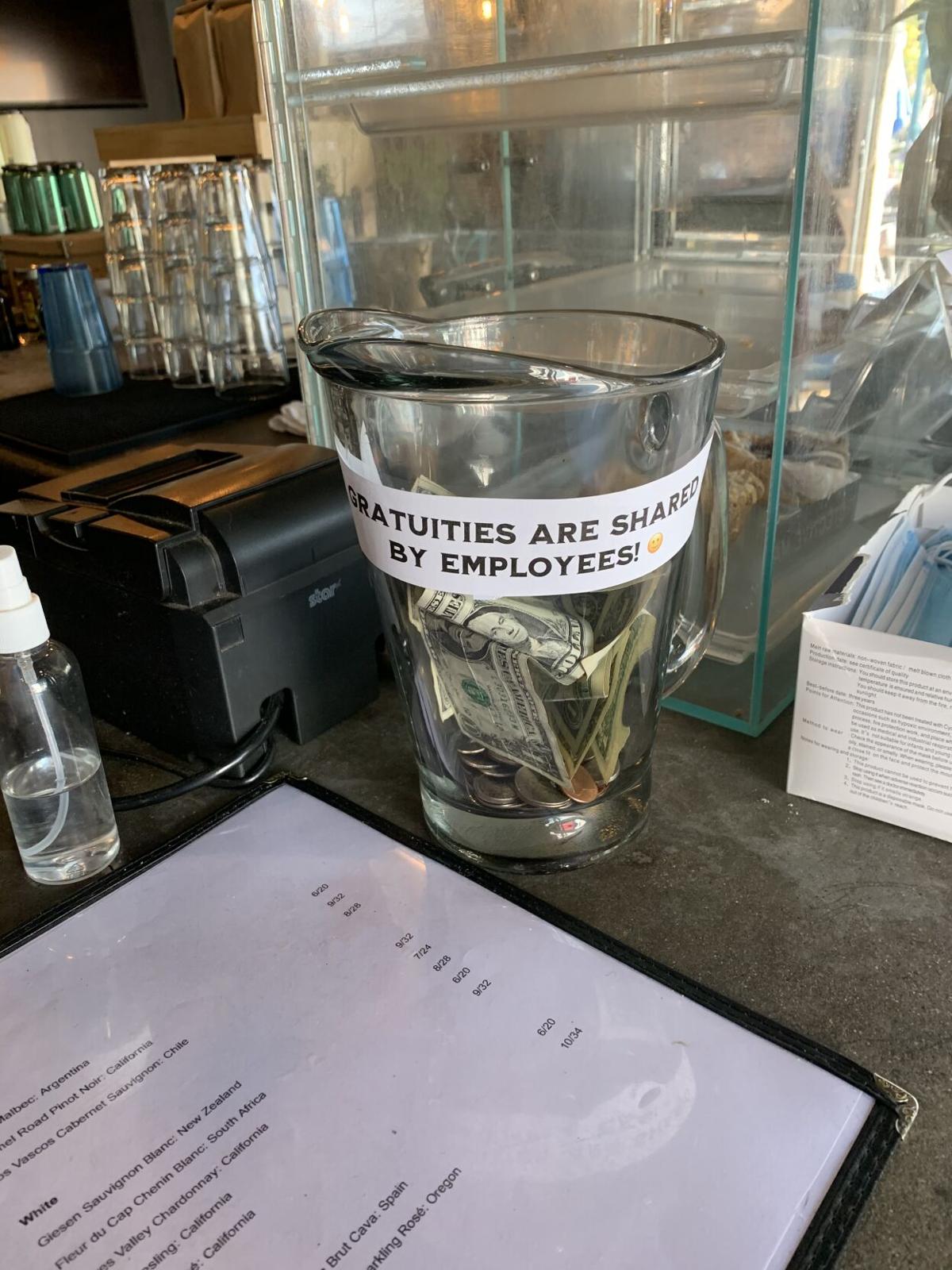 Colorado law states that employers who pool tips are required to "[notify] each patron in writing, including by a notice on a menu, table tent, or receipt, that gratuities are shared by employees."

Updated on March 2, 2021: Russ Ware and Yemi Mobolade provided the Indy with a statement regarding the Colorado Department of Labor ruling and the statements made by claimant and former employee Michael Smith. Ware and Mobolade's statement is available, in full, below:

"Covid has hurt small businesses. No doubt. We’re grateful for the government relief that’s come our way as well as the support of our community. But, economically, this has still been a nightmare for those of us trying to keep afloat in turbulent waters.

At The Wild Goose and Good Neighbors, those waters have been made more turbulent by a devastating wave of labor issues. With less money coming in, and with a pandemic stressing all of us, fissures turn into chasms.

As relationship problems are rarely one-sided, we must own our part. We’ve made mistakes, and for that we are humbled. We can do better.

And as often happens, the social media world has created some false narratives.

Last October, employees brought a list of concerns to us.

As indicated in the article by Heidi Beedle (Feb. 25), a key concern was our tip pool, which included food-prep staff. We have felt that our “shared hospitality” model was compliant with tipped minimum wage standards as all of our staff participate in essential hospitality.

Nevertheless, when the concern was brought to us on Oct. 5, we considered this question. We called a staff meeting for the following Sunday to discuss concerns, and we invited our staff to gather with us the evening of Oct. 5 to begin discussion.

We sent a staff communication that included the following:

“We believe our full staff tip sharing model is supported by current guidelines given our particular model. We set up this system within researched parameters. That being said, with the question raised, we have begun fresh research to double check the most current verbiage in the law and if we need to make any adjustments, those will be made… we are humble and aware of ways we can improve in communication and clarity to staff, directly related to some of the issues mentioned above as well as other areas! We are committed to improvement in this area. As far as the specific communication related to concerns brought to us yesterday, we need and want to hear more on Sunday. We need more information, and we are ready to listen! Yemi and I (Russ) want you to know how much we value every single one of you. We are 100% committed to improvement in every single way, with a top priority being a staff team that is celebrated and supported. We are looking forward to further discussion and movement forward together.”

We also shared this approach with Beedle in an interview given on Wednesday, Oct. 7.

Michael Smith states in the Feb. 25 article that, “The real solution would have been for Russ to just sit down and talk with us and be like, ‘Hey, this is a valid point. I didn’t even think that it might have been illegal.’ We didn’t get anything like that.”

In fact, that is exactly what we tried to do.

By early November we knew we could find a better way that would remove compliance questions and promote equity, and we explored possibilities according to key criteria:

1. Any new system must be in clear compliance with all relevant legal guidelines.

2. It must move pay for all of our staff forward, not backward.

3. It must be sustainable and affordable.

4. It must be just and equitable.

5. It must help us move forward in enriching relationships and building community.

By early December, we had landed on the “hospitality included” model.

We received the wage complaint on Dec. 10. In our response to the Dept. of Labor, we shared the change we would be making in January, and we described our old system, expecting to demonstrate compliance.

Another clarification on the Feb. 25 article. Readers might get the impression that this dispute was simply about the tipping pool.

In fact, Smith made a number of claims. Each were dismissed, except for the tip pool issue. On that point, the investigator ruled that we were not in compliance, with damages due for that portion of the complaint: $2,372.67, plus late penalties.

While we are disappointed in that ruling, we are excited about the changes we have already made, especially our removal of the tipping model in favor of straightforward pricing and unwavering pay well above minimum wage. We believe this is the way of the future for our industry, and as hard as the last few months have been, we are grateful for the prompt to make this change now.

One final clarification regarding the Feb. 25 article. It says we did not respond to a request to comment for the article. In fact, we didn’t know there was an article. We received an email from Beedle on the afternoon of Feb. 25. That email did not mention an article. It read, “Do you guys have a statement on the recent decision from the Colorado Department of Labor Division of Labor Standards and Statistics ruling that Wild Goose violated the Colorado Wage Act? Do you plan to appeal the decision?”

We were considering our response when we saw the article the next morning.

We want to give our energy to things that make us better. Our former system allowed us to provide equitable pay without raising our prices.

Prompted by our staff, we’ve found a better way. We thought our old system was compliant, but we accept the ruling, and we will meet those obligations. We look forward to a great future, which includes the re-opening of the Wild Goose, with the new system, very soon.

The Colorado Department of Labor and Employment's Division of Labor Standards and Statistics has ruled against Russ Ware and the Wild Goose Meeting House in a wage complaint brought by former Wild Goose bartender Michael Smith. According to the “Notice of determination and enclosed citation and notice of assessment” issued by the Department of Labor, “The Division concludes that the employer violated the Colorado Wage Act and/or provisions of the Colorado Overtime and Minimum Pay Standards Order by failing to pay all earned wages as required.”

Smith and 16 other employees presented a list of grievances, including wage theft, to Ware and co-owner Yemi Mobolade, who also serves as the small business development administrator for the city of Colorado Springs. The complaint was filed Oct. 5, 2020. On Oct. 6, two of the employees, both managers, were fired. Workers organized a picket in front of the Wild Goose on Oct. 7. The organizing efforts of the workers drew a mixed reaction from the community, with many prominent community members, such as UCCS Women's and Ethnic Studies Professor and community activist Stephany Rose Spaulding, District 11 Board of Education President Shawn Gullixson and District 5 City Councilor Jill Gaebler, supporting of Ware and the Wild Goose.

“That’s just proof that we were right all along,” says Smith. “There were a lot of people saying we shouldn’t have been picketing, we shouldn’t be making a big deal of this, because you can just go to the Department of Labor. The thing is, it took so long. It’s been five months since we started doing all of this. The real solution would have been for Russ to just sit down and talk with us and be like, ‘Hey, this is a valid point. I didn’t even think that it might have been illegal.’ We didn’t get anything like that. We got that mandatory meeting where they just kind of ran around in circles for two hours and asked to buy us more time, and then just basically waited until we all quit or he could fire us because of the pandemic.”

On Nov. 23, 2020 the Wild Goose’s Facebook page announced that the Wild Goose would be closing due to COVID-19 restrictions. “We have been through this before, and we will stick with the same approach we took back in the spring — temporarily pausing The Goose at close of day on Wednesday, and focusing our attention over at Good Neighbors for takeout food, spirits and market goods for as long as we can,” read the post. Smith and other Wild Goose employees were laid off.

The argument over compensation stemmed from Ware’s claims that the Wild Goose ran under a “shared hospitality” model of operation. “Basically every person back here has something to do with serving a customer, whether you’re making a latte or making a sandwich,” Ware told the Indy in October. “The guys up front are going to be doing the cashier function, but the guys in the back are going to be bringing the food out to the tables. We call it a ‘shared hospitality’ model. In a traditional restaurant, food-preparers, if that’s their only job, are not supposed to be in the tip pool. The people here who prepare our food are also part of our service mechanism, so they’re not just food preparers.”

Smith disagreed with Ware’s interpretation. “He was making this argument that everyone was a server, which was really just an excuse to pay everyone server wages,” says Smith. “By the way he set up his business, cooks couldn’t be front-of-house, because he would only let front-of-house be 21 and up. You could work that around where you could have someone who could pour alcohol work with someone who was just coffee and register, but Russ wouldn’t even bother with that. He just said, ‘You can’t work up front unless you’re 21.’ It’s one of those things that breaks your own argument. The only people ringing people up and taking tips were the people working in the front. He kept talking about this ‘shared hospitality concept,’ but he wouldn’t really talk about the fact that he’d be fine if he was just paying us $12 [an hour], plus everyone splitting tips.”

The Department of Labor agreed with Smith, noting, “Based on the submitted documentation, the Division determines that the employer has failed to prove by a preponderance of the evidence that the claimant is not owed wages and tips.”

This ruling on Smith's claim has implications for other employees as well. Smith said two other former employees have also filed claims for wages owed to them. "A little while after I filed my claim, another co-worker filed his, and he worked maybe four months," says Smith. "Then another coworker, who had worked there for two and half years, filed. In my opinion, the fact that we’ve had to take him to the Department of Labor to even just talk about getting paid is ridiculous, because at the team meeting I asked several times what his plan was to pay us back if his lawyers said he was breaking the Wage Act, and he wouldn’t give us an answer."

In January, Ware and Mobolade announced that Good Neighbors Meeting House, the Wild Goose’s sister shop that has remained open throughout the pandemic, would be moving to a no-tip system, and would pay workers starting at $16 an hour.

Ware and Mobolade did not respond to the Indy’s request for comment. Ware has 35 days from Feb. 19 to appeal the Department of Labor’s ruling.