A parent in Arizona raised Concerns about Silverthorn in October 2020. On May 20, a search warrant was executed at both Silverthorn’s residence and Harrison School District 2’s Monterey Elementary. According to a Colorado Springs Police Department news release, “On May 17, 2021, Internet Crimes Against Children Task Force was contacted by the Durango Police Department, who had been conducting an online, undercover operation over the last two months. During the investigation, law enforcement personnel, operating in an undercover capacity, communicated on the internet through various websites with individuals interested in having sex with children, one of which was identified as Silverthorn. It was later learned that Silverthorn resided in Colorado Springs. At that point in the investigation, the Durango Police Department requested assistance from the Colorado Springs ICAC Task Force to continue the investigation.”

The search warrant affidavit filed in El Paso County for Silverthorn provides the details of Durango PD’s undercover operation. A Durango PD detective and police service technician placed an advertisement on Doublelist, a website for dating and personal ads. The advertisement read “Keep Me Company — Lonely girl looking for company. Too shy to respond to other people’s ads but hoping for something here. Details: 18 years old in (Manitou Springs).” 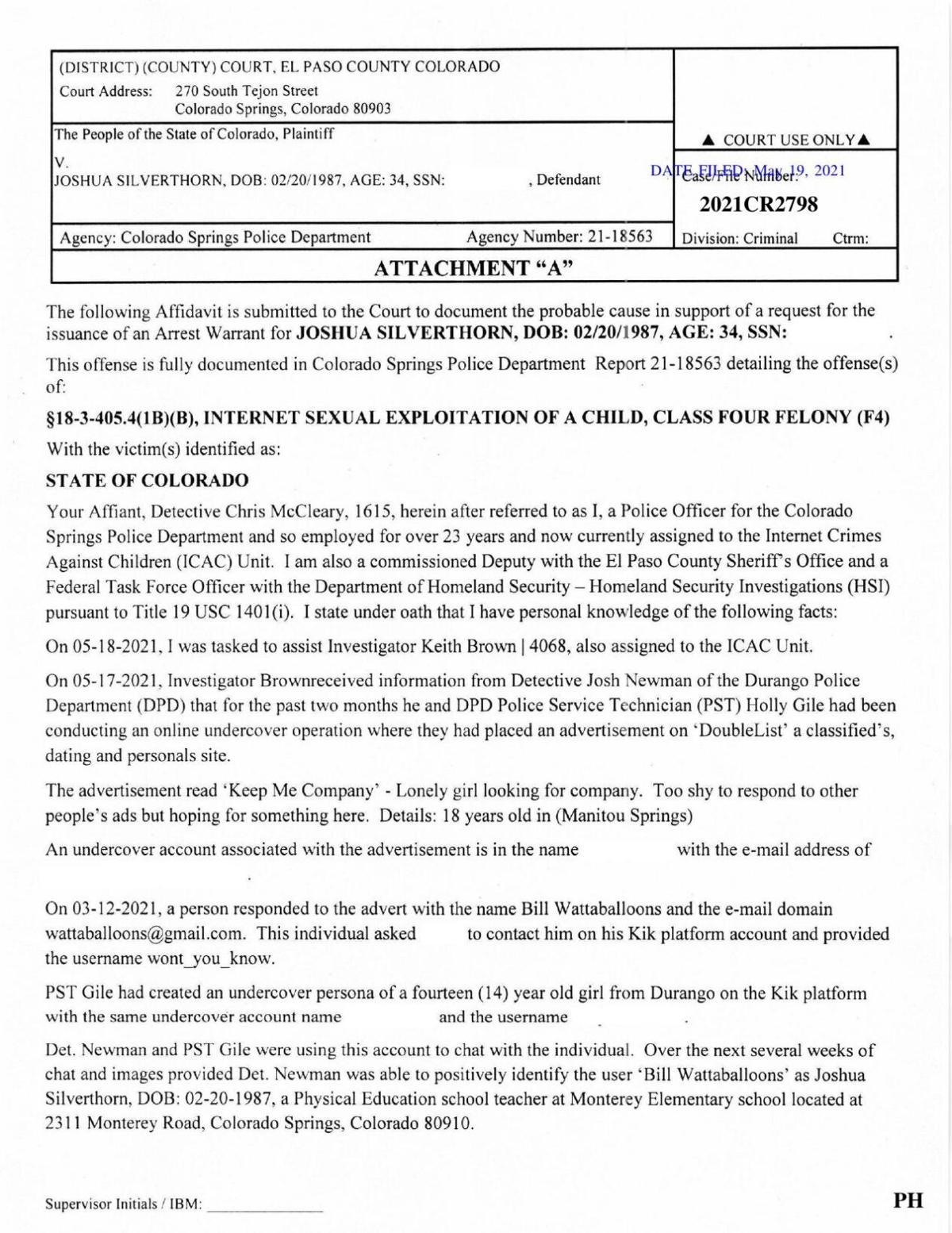 The use of internet sting operations by law enforcement agencies is relatively common. The website of H. Michael Steinberg, a Colorado defense attorney, notes, “Internet sting operations of the type used here are common and are used in many jurisdictions. They are relatively inexpensive and easy to do, lack substantial risk to law enforcement personnel, and are directed to very serious offenses with respect to which there is considerable public concern. They are typified by a law enforcement officer assuming the identity of a child, engaging in extended Internet chats with the target, exchanging pictures, and arranging a meeting with a fictitious child at which the target is arrested.”

A common defense for the kind of conduct used by law enforcement in these cases is the claim of entrapment. According to Steinberg’s website, “The commission of acts which would otherwise constitute an offense is not criminal if the defendant engaged in the proscribed conduct because he was induced to do so by a law enforcement official or other person acting under his direction, seeking to obtain evidence for the purpose of prosecution, and the methods used to obtain that evidence were such as to create a substantial risk that the acts would be committed by a person who, but for such inducement, would not have conceived of or engaged in conduct of the sort induced.” However, “Merely affording a person an opportunity to commit an offense is not entrapment even though representations or inducements calculated to overcome the offender’s fear of detection are used.”

Silverthorn continued to text and share photos with the officers, and the affidavit notes that on April 2, “the conversation continues in a more aggressive sexual manner.” Silverthorn sent explicit sexual comments to the officers, believing them to be a 14-year-old girl, and on April 4 asked, “Will you visit me in jail when I get taken away?”

On April 20, Silverthorn attempted to schedule a meeting with the girl, “I would say yes I’m def thinking about coming and seeing you,” he messaged the officers.

On April 24, Silverthorn sent explicit selfies to officers, described as “adult male, he is wearing a purple colored top and gray bottoms, he appears to be in an office or workplace bathroom,” exposing his genitals. On April 28, Silverthorn told the officers to begin using Signal, an encrypted messaging app, and continued to send explicit selfies and videos of himself.

According to D2’s statement after his arrest, Silverthorn is currently on administrative leave. The district’s statement notes, “All citizens are innocent until proven guilty in a court of law and at this time, no determinations have been made regarding the guilt or innocence of Mr. Silverthorn.”

Prior to his employment with D2 in 2017, Silverthorn worked as an elementary physical education teacher for the Catalina Foothills School District 16 in Tucson, Arizona. According to emails obtained by the Indy through a Freedom of Information Act request to the district, a parent had raised concerns about Silverthorn’s conduct to a school administrator in Arizona a year before his arrest.

“Last night, my boys told me about some disturbing behavior that they witnessed by a teacher (who has since left), when they were at Ventana Vista [Elementary School],” read an Oct. 9, 2020, email to Kim Boling, who was the principal at Ventana Vista during Silverthorn’s time there. “They were younger at the time and so didn’t realize how inappropriate it was, but it’s upsetting enough that I googled the teacher and was dismayed to see that he is still a teacher in another state. I’m wondering if anyone else is aware of this issue and whether it’s already been addressed, or if I need to raise it with the appropriate authorities.”

A parent had raised concerns about Silverthorn’s conduct to a school administrator in Arizona a year before his arrest.

The specific concerns raised by the parent were not included in the emails released to the Indy, but after meeting with the parent, Boling responded, “I did speak with our Assistant Superintendent about this information. We both agree that, while these actions are inappropriate and show poor [judgment], neither require a mandatory report to law enforcement. We do not intend to take action on this information for a former employee.”

Arizona, like Colorado, “mandates that certain professionals report suspected child abuse to the proper authorities. Among these professionals are nurses, psychologists, social workers, counselors, school personnel or any other person having responsibility for the care or treatment of children. This includes, at least, all teachers and administrators,” according to the Arizona State Board of Education’s “State of Arizona Reporting Procedures.”

Arizona also requires that “a report must be made when a school district superintendent or chief administrator of a charter school reasonably suspects or receives a reasonable allegation that a person certificated by the State Board of Education has committed an immoral or unprofessional act that would constitute grounds for dismissal or criminal charges.” Examples of immoral or unprofessional conduct, according to Arizona regulations, include “any sexual advance towards a pupil or child, either verbal, written, or physical; sexual activity, a romantic relationship, or dating of a pupil or child; use [of] school equipment to access pornographic, obscene, or illegal materials.” As of June 9, the Arizona Department of Education shows that Silverthorn’s educator credentials are still valid and will expire in 2032, and that he has no disciplinary action on file.

In addition to that specific email exchange, the Indy requested any additional emails between administrators regarding Silverthorn, and any disciplinary actions or concerns expressed during his tenure at Ventana Vista Elementary School. According to Catalina Foothills School District Assistant Superintendent Denise Bartlett, no such records existed. Prior to his employment in Arizona, Silverthorn worked as a substitute teacher for the Vigo County School Corporation in Indiana, employed by Kelly Educational Services. A spokesperson for Kelly Educational Services commented via email, “All Kelly Education employees are background screened in accordance with state and federal guidelines as well as customers’ requirements. It is, however, the policy of Kelly Education not to discuss matters specific to current (and former) employees.”

In a statement released following Silverthorn’s arrest, Harrison School District 2 noted, “Upon being hired, a full background check, including a Colorado Bureau of Investigation review and fingerprint submission to the Federal Bureau of Investigation was conducted. The background checks for Mr. Silverthorn did not indicate any prior inappropriate behavior or criminal activity.” A D2 spokesperson confirmed that during the hiring process in 2017, Silverthorn’s references from Ventana Vista Elementary School, the principal, assistant principal and a special education teacher, spoke highly of him.

Silverthorn’s Colorado Professional Teacher License, issued in May 2020, is still listed as “active” according to the Colorado Department of Education.