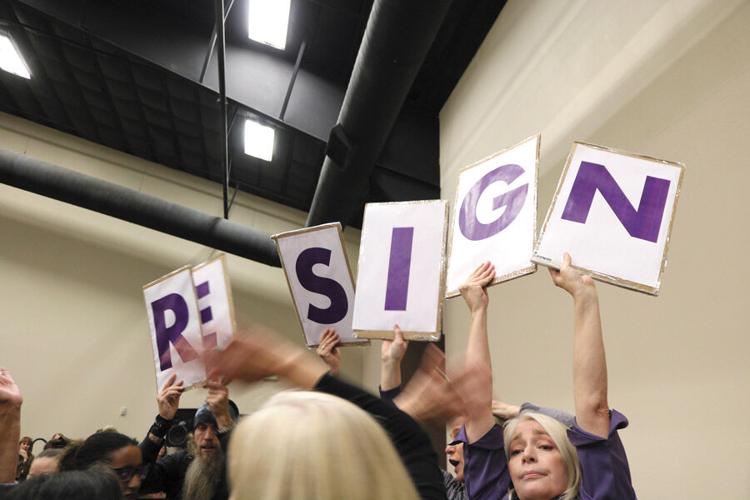 NFE members call on Ivy Liu to resign, while Liu supporters try to block them. 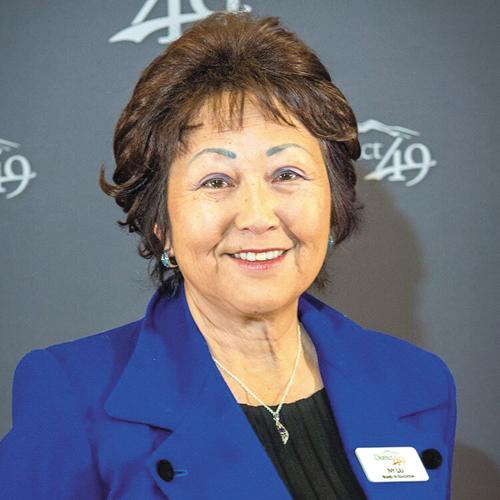 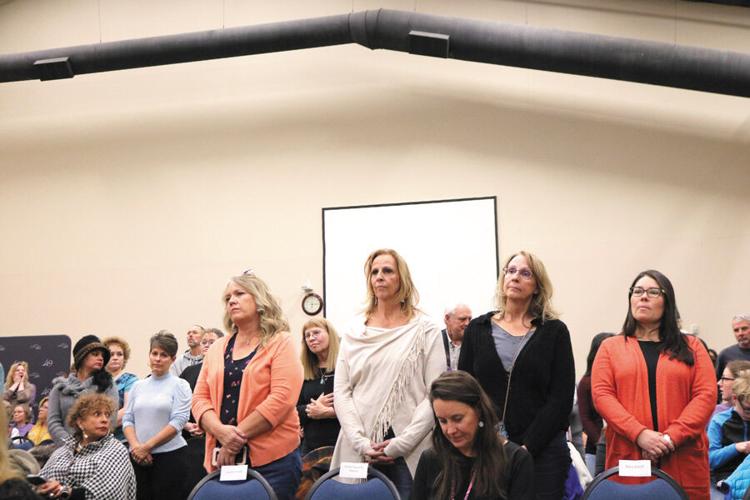 Attendees stand in support of Liu during the Nov. 10 special Board of Education meeting where she was censured.

Deep divisions in School District 49 (D49) were clear at a special Board of Education meeting on Nov. 10, where the board moved to censure and demand the resignation of Director Ivy Liu, to the jeers and vitriol from audience members there in support of Liu.

Board President John Graham says Liu, who was reelected to her seat in November 2021, has repeatedly told lies about the district and employees to drum up controversy and support from right-leaning members of the community, some of whom he says are not D49 stakeholders. Liu’s rhetoric drove two top executives to resign in July, the Indy reported, and board Vice President Rick Van Wieren says he anticipates the district will lose “dozens of employees as a result of what she’s doing.”

Liu claims students are being “indoctrinated” by critical race theory (CRT) and Social-Emotional Learning (SEL) programs. CRT is an academic approach to studying U.S. history based on the premise that racial bias is baked into the nation’s laws and institutions. Though CRT is not taught in K-12 schools, it has been a target of conservatives elected to school boards throughout El Paso County, and D49 was the first to officially ban it last year. Now, Liu is also railing against SEL programs, which she called “insidious” in a written statement shared with local media outlets — and she claims they have CRT embedded in them. SEL programs are designed to help students develop self-control, self-awareness and interpersonal skills through school curricula.

The pattern of comments — seen by many as attacks on D49 administrators and teachers — has been damaging to the board’s relationship with employees and the community as a whole, Graham tells the Indy, and he’s been attempting to “correct” Liu’s behavior publicly since December 2021. She was stripped of her treasurer position and committee assignments earlier this year.

But now Graham is at a loss. It was Liu’s Oct. 31 Facebook post quoting Adolf Hitler, that made board members decide she’d gone too far, and forced the collective response.

“‘He alone, WHO OWNS THE YOUTH, gains the future,’” Liu posted, citing Hitler.

“PARENTS!! GET INVOLVED AND FIGHT LIKE YOUR CHILDREN’S LIVES DEPEND ON IT, BECAUSE IT DOES,” Liu’s post continued. “Fight back the [CRT] concepts that are deceptively hidden in many of the latest [SEL] programs from CASEL.org. Not all SEL’s are bad, but some are insidiously programmed to do just what our enemies intend.”

The post was immediately condemned by members of Neighbors For Education (NFE), a pro-public education and equity group originally started in Colorado Springs School District 11, which now has leaders and members from D49. They called for Liu’s resignation and organized a response and presence at the Nov. 10 meeting, where members spelled out “RESIGN” in large letters on cardboard.

“It’s very clear to me that she has no genuine interest in helping our kids, being a team player, working collegially with her fellow board members; she has no interest in supporting teachers and staff, and that’s what being a board member is about,” said Lindsey Lee, a D49 parent and co-chair of NFE.

Graham released a statement on the D49 Facebook page on Nov. 4, which he says was also approved by board Secretary Lori Thompson and Van Wieren, calling the quote Liu posted “egregious, not in line with our cultural compass, and wholly unacceptable.” Among the more than 300 comments on Graham’s statement was one from Van Wieren, where he stated he had asked Liu to resign in an email to her.

It’s very clear to me that she has no genuine interest in helping our kids...

The three board members voted 3-2 on a resolution to formally censure Liu (a largely symbolic move to show disapproval) and call for her resignation, with “no” votes from Treasurer Jamilynn D’Avola, who has backed Liu’s false claims and rhetoric, and Liu herself. The resolution also authorizes D49 legal counsel Brad Miller’s firm, Miller Farmer Law, to hire an investigative group to start developing a possible criminal or civil case against Liu, based on allegations of Colorado Sunshine Law and labor law violations.

Van Wieren’s reading of the resolution aloud was interrupted and cut short by hecklers in the audience supporting Liu, shouting it was a “kangaroo court,”  calling Graham “a joke” and Thompson “an idiot.” The hecklers called the board action against Liu “bullying” and some public commenters claimed the three board members were the ones creating division, not Liu. Graham had to gavel the standing-room-only crowd to attention twice during the resolution reading, and threatened to have one woman removed.

The meeting was heated, and at times confrontational. At one point, Liu supporters attempted to physically block the Indy from photographing NFE’s “RESIGN” letters and the group is collecting accounts of other aggressive behavior and alleged assault and harassment of their members.

Liu ultimately refused to resign and doubled down on her rhetoric, saying she came on the board “to stop indoctrination, only to find out there is already indoctrination in the school district.” She claimed in her written statement that she and D’Avola were “blocked from proposing agenda items, isolated from discussions and information of new board business, and generally ignored in decisions.” (The other board members say this is not true.)

“The FB post about Hitler that was escalated disproportionately was in my opinion an attempt to silence me from sharing the information about the harm of some SEL,” Liu claimed in her statement. “The whole idea of the post was to NOT repeat history.”

Liu claimed she and D’Avola had a “laser-focus on academics,” and “there have been numerous slanderous allegations made against me without evidence. The one that griefs me the most is my alleged ‘attack on teachers and principals.’ I hold much respect and esteem for our hard-working and underpaid educators. However, I hold the administration responsible for the direction of the district and the academic performance of the children.”

Miller also implored Liu to resign in a lengthy email shared with the Indy. The board generally agrees on a number of right-leaning priorities — the CRT ban, improving student test scores, “parental rights,” curriculum transparency and halting mask requirements and quarantines in D49 schools during the COVID pandemic, for example.

But action on these goals is being derailed, Miller wrote, by Liu’s “ad hominem attacks on your peers, your specious and completely invented allegations about staff behavior, your efforts to rally unsuspecting and often credulous community members to join in your unfounded attacks, your uncouth and mean efforts to undermine the employment or potential employment of those who don’t share your political views, and, most of all, your harmful social media efforts.”

Van Wieren added that academic achievement is a stated priority of the board, but one that cannot be realized with the loss of good staff members.

“If you kick out all the people that are supposed to be doing the work, or scare them out, or engage in other activities that you shouldn’t be, surprise, surprise, you don’t have the staff to get it done,” he said. Liu is “sowing seeds of discord in a school district that employs 2,000 people and needs to keep 2,000 people working so that the buses are running, so that the classrooms are staffed, so that we have para[educators] to help with those kids who have special needs.”