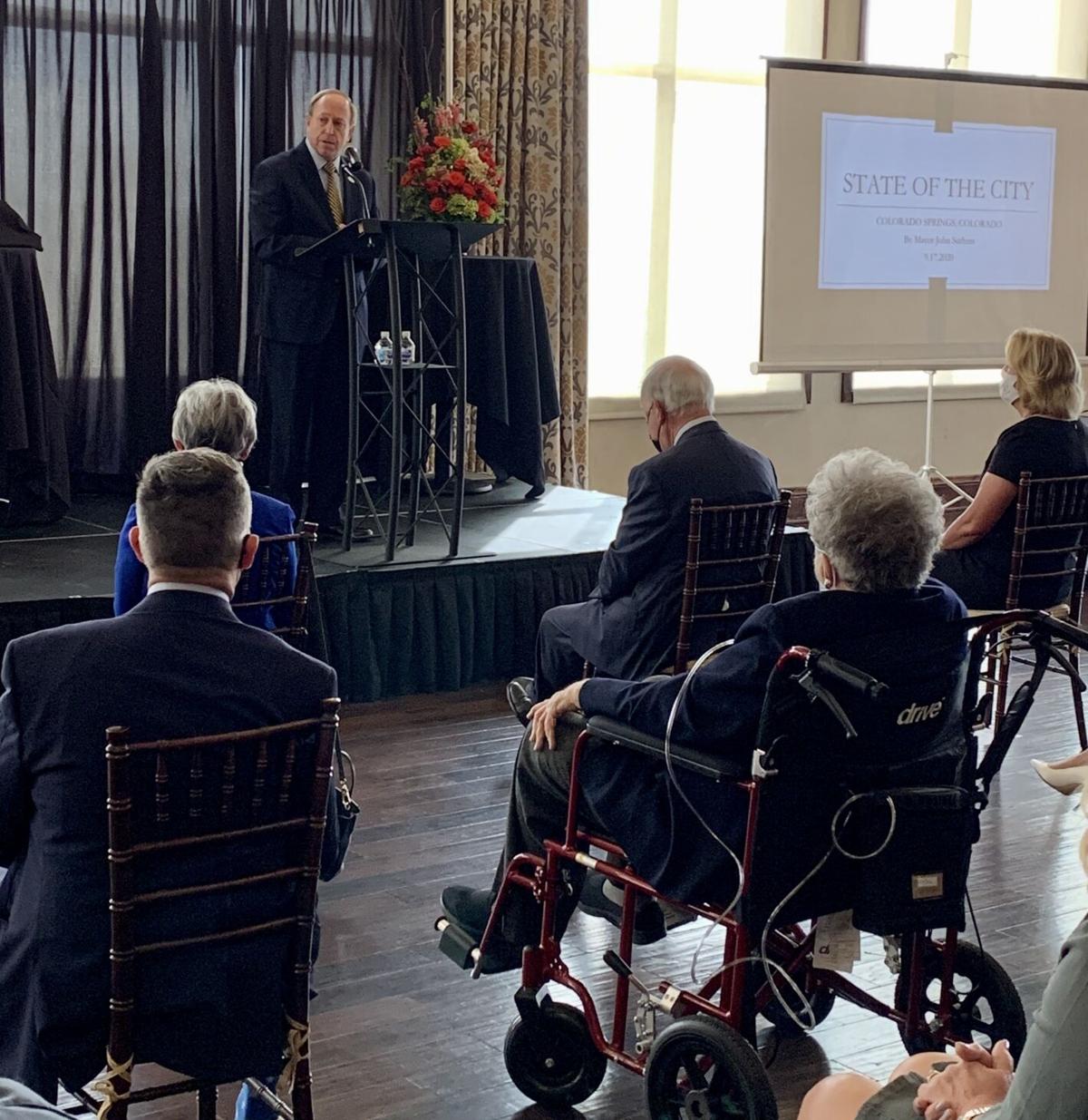 Mayor Suthers speaks to about 100 people at The Pinery and several hundred others via Zoom during his State of the City address on Sept. 17. 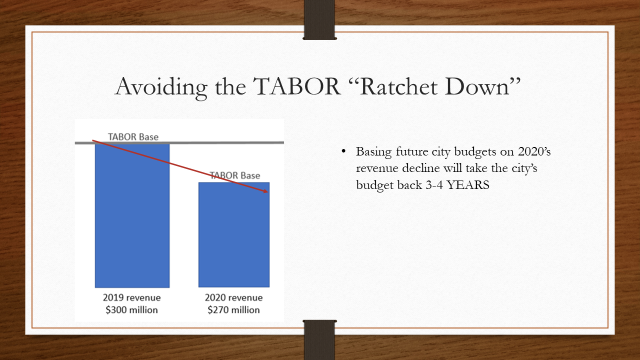 Suthers says the Nov. 3 ballot measure, if approved by voters, would allow the city to avoid losing revenue in future years. 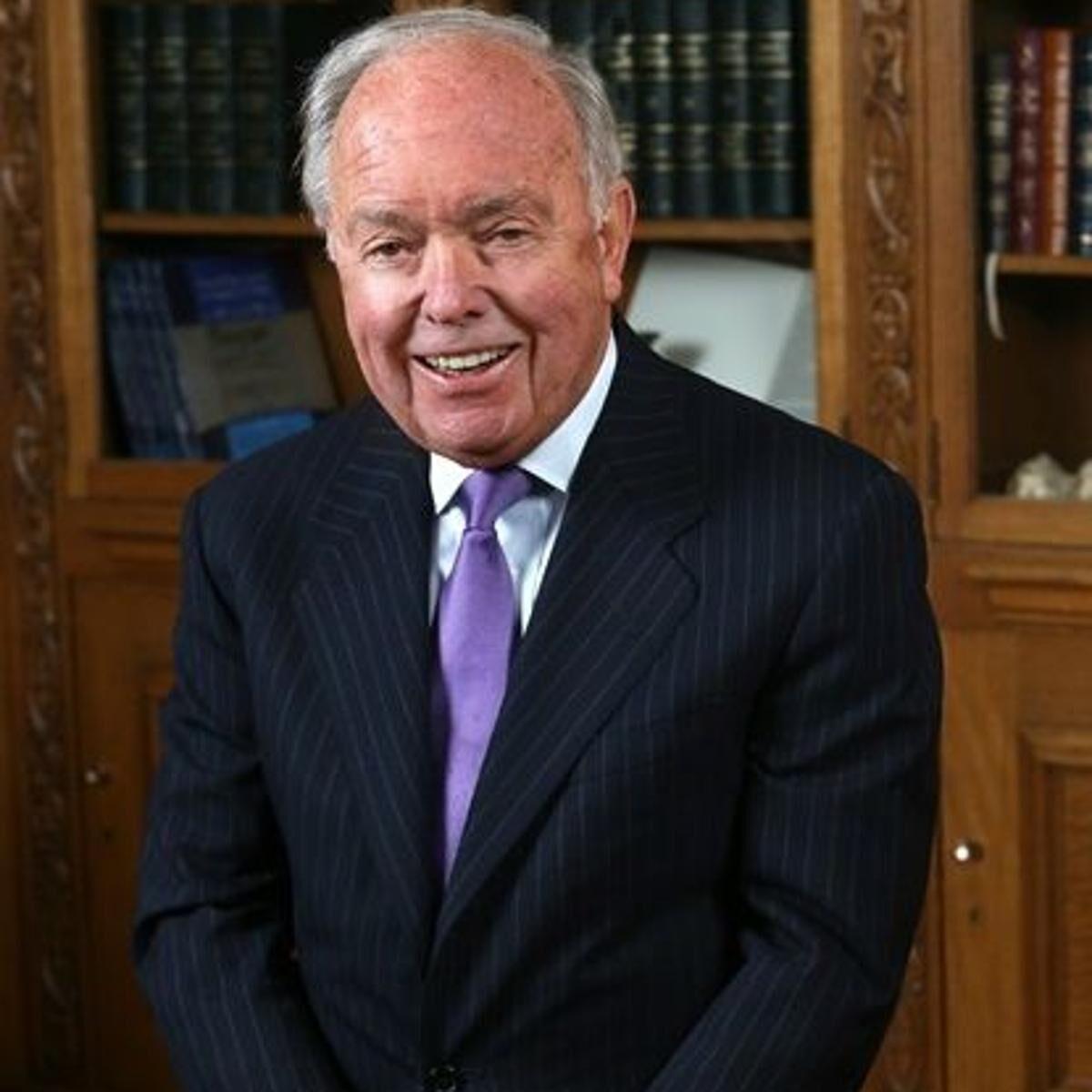 Bill Hybl was awarded the Spirit of the Springs Lifetime Achievement Award.

If anyone can turn lemons into lemonade, Mayor John Suthers demonstrated he can during his sixth State of the City speech delivered to hundreds of people via Zoom on Sept. 17.

He cited the city's resiliency amid the COVID-19 virus as key to maintaining Colorado Springs' trajectory forward despite the pandemic.

He also used his platform at the Colorado Springs Chamber & EDC-hosted event at The Pinery to stump for the city's ballot measure that would reset the city's revenue limit under the Taxpayer's Bill of Rights (TABOR) at the 2019 cap, rather 2020 revenues, which have faltered due to closures prompted by the virus.

Calling resiliency a "hallmark of a great city," Suthers said, "History tells us Colorado Springs has survived great fires and great floods, the end of a gold mining boom, the great depression, the great recession and other natural and man-made calamities.  And as we meet today, we are in the midst of a worldwide pandemic."

Yet, he said, the city's push forward continues via millions of dollars of public and private investment, notably in the five venues of the City for Champions initiative.

Though the city's unemployment rate quadrupled from 3 percent to 12.6 percent due to COVID-19, and tax revenues plummeted by 14 percent in March and 22 percent in April, the city has avoided economic collapse due to its resiliency, Suthers said.

Crediting Gov. Jared Polis' leadership and work by El Paso County Public Health, Suthers noted Colorado's economy began to reopen before other states. He also credited local citizens for their "overwhelming cooperation" and compliance with social distancing and mask-wearing, although a contingent of citizens have actively opposed wearing face coverings, which officials and scientists have described as the single most effective deterrent to the virus' spread.

There's miles to travel before complete recovery from the pandemic, he said, but citizens can help by voting "yes" on 2A on the Nov. 3 ballot. The measure asks permission to retain $1.9 million in excess funds under TABOR for 2019 and also to reset the TABOR cap at the 2019 level, rather than 2020's ceiling. Without that measure, the city's revenue cap would drop by $30 million, which would take years to regain, Suthers said.

The mayor also recapped City for Champions progress, noting the United States Olympic & Paralympic Museum opened on July 30; the William Hybl Sports Medicine and Performance Center opened in August at the University of Colorado at Colorado Springs; Weidner Field downtown and Robson Arena on the Colorado College campus will open next year; and the Air Force Academy's Visitors Center, the only venue to suffer a setback due to the virus when bonds couldn't be issued last March, should get on track later this year.

Suthers also highlighted the addition of hundreds of apartments downtown, the decision to close the Drake Power Plant downtown in 2023, Scheels All Sports and Ent Credit Union headquarters being under construction on the northside and Amazon's distribution facility near the Colorado Springs Airport as reasons to celebrate.

Moreover, the city is within $3 million of its goal of $15 million to help fund the Summit House complex on Pikes Peak, which is due to open next spring, and the city is poised to become the permanent site for U.S. Space Command.

Suthers gave brief attention to Black Lives Matter protests — without naming the movement — which broke out nationwide after the May 25 death in police custody of George Floyd in Minneapolis.

"Many cities experienced riots and extensive property damage," he said. "But Colorado Springs was blessed to have the vast majority of protesters focused on their cause and dedicated to lawfully exercising their First Amendment rights, as well as a police department focused on protecting their right to do so, while also protecting all our citizens and their property."

Creation of the Law Enforcement Accountability Commission, he said, was "a real testament to our community's resiliency."

Suthers even expressed hope the city could meet one of its most difficult challenges: adding affordable housing. He said 600 units are under construction now and 1,100 more are on the drawing board.

The mayor recognized Pedro Lombach, with Neighborhood Services, as the employee of the year for his "willingness to do whatever is asked of him."

Hybl served as President and CEO of El Pomar Foundation for nearly five decades and recently stepped down, but remains Chairman of the Board.