Mosaica will offer 223 apartments across 14 acres in Southeast Colorado Springs. 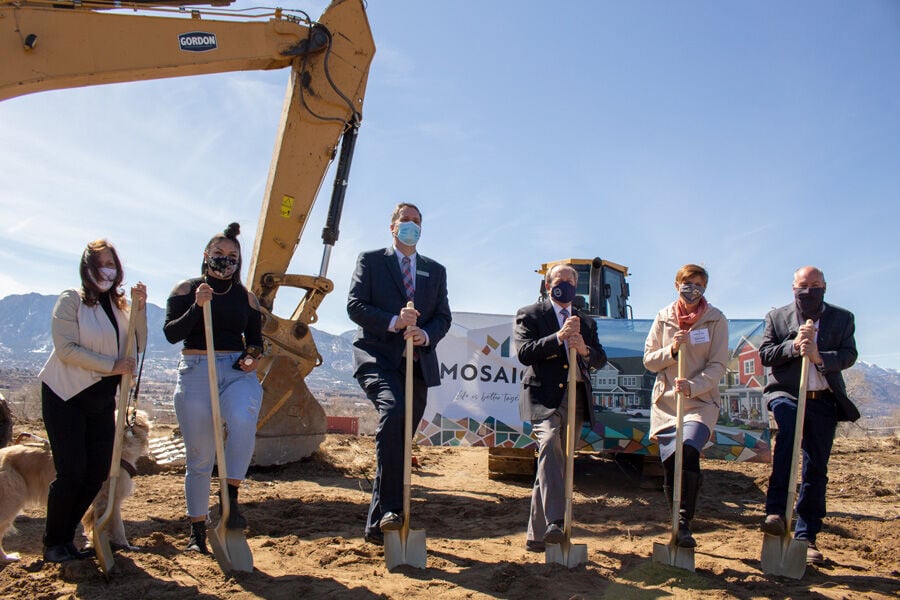 Nicklasson says vertical construction at Mosaica will begin in May or June.

Colorado Springs Mayor John Suthers and District 4 City Councilor Yolanda Avila attended a March 18 groundbreaking for the new multi-family housing development Mosaica. Suthers and Avila noted that the development is one of the many projects reaffirming the city’s commitment to developing more affordable housing in the city.

“There will be a total of 223 apartments spread across 14 acres,” says Darsey Nicklasson of DHN Development. “The houses are designed a little bit different — they’re in five- or six-plex buildings — so there will be five or six units in each house. They simply look like a big house. They have wide front porches, they’re only three stories tall. That includes the peak of the building where we actually have a bedroom up there for some of the units, kind of like a loft. One of the things we’re doing with Mosaica that makes it a little bit different is we’re holding this project for 10 years, so we’re definitely investing in the community and are looking to become an integral part of the community, not just build them and sell. We’re going to try our best to keep rents as low as we can.”

Nicklasson recognizes the importance of increasing the housing supply in Colorado Springs while ensuring people can still afford to live here. “In any normal business it is completely acceptable for any business to charge market rate for whatever they’re selling,” she says. “Say it’s shoes. You have a great pair of shoes, it’s in high demand, usually you can increase the price. We’re doing something a little bit different because this is housing and we believe everybody deserves a good place to live.

We’re actually committed to keep the rent as low as we can. We’re kind of turning the business model on its head. The reason we’re doing that is because all of our investors in this project are local to the Front Range. They own businesses, and they watch their employees or their friends and colleagues try to find a good place to live, especially for families, and this is one way for us to be able to give back. I call it ‘Leaving a little on the table for the other guy.’”

During his remarks at the groundbreaking, Suthers emphasized the city’s commitment to expanding affordable housing. “Affordable housing in our city is a very high priority,” he said. “I set a community goal to build, preserve and create opportunities to purchase an average of 1,000 affordable and attainable units per year over the next five years. The city has created HomeCOS, which is a blueprint to achieving that goal. I’m thrilled to say that Mosaica, and the addition of 232 housing units, contributes to that goal. Mosaica is one of several attainable and affordable projects in various phases of development, including projects by the Solid Rock Community Development Corporation and the mixed use and affordable housing project set to revitalize the Mission Trace Shopping Center.”

Affordable housing has been an ongoing concern along the Front Range. “We have housing stock here, but it is just skyrocketing in price,’ said Rep. Marc Snyder, D-HD18, during a January town hall. “One thing I’ve recently become aware of is California actually has a cap of 10 percent as the maximum increase in rent ... on any property. I’m generally not in favor of hard, fast rules like that, but I think we’re getting to that crisis point where we need to do something.”

Rent control, which is used in places like California and New York, is illegal in Colorado under a 1981 law, which was upheld in a 2000 5-2 Colorado Supreme Court ruling. However, legislators are considering other legal means to address what many see as an affordable housing crisis in Colorado. House Bill 21-1117, sponsored by Rep. Susan Lontine, D-HD1, Rep. Serena Gonzales-Gutierrez, D-HD4, Sen. Julie Gonzales, D-SD34, and Sen. Robert Rodriguez, D-SD32, would clarify “the existing authority of cities and counties to plan for and regulate the use of land [including] the authority to regulate development or redevelopment in order to promote the construction of new affordable housing units.” It would essentially allow cities to enact practices such as inclusionary zoning, which would require developers to deliver a certain number of affordable housing units in all new developments.

“I think that’s an excellent idea,” said Avila during the groundbreaking, “to let every development, throughout the whole city, that there be a percentage there for affordable or low-income housing, so it doesn’t get saturated in one place in the city, or in one district. That way people can see all the opportunities available throughout the city.”

Avila is the outlier on City Council, however. “As the City Council stands right now, I don’t see that happening,” she noted.

“What it ends up doing is driving values up across the board, and if you study the cities that are big into it, they have the highest rents of all.”

Suthers and At-Large City Councilor Wayne Williams noted that such legislation tends to drive up housing costs. “I’m opposed to mandating to property owners how they develop their property,” said Suthers. “I want to encourage people to develop affordable housing because it’s the right thing to do and there is a market for it. I have always been against inclusionary zoning. I really believe in the marketplace and I think it’s contrary to market principles. What it ends up doing is driving values up across the board, and if you study the cities that are big into it, they have the highest rents of all.”

Williams noted that economic factors influence housing prices, emphasizing the need to increase the overall supply of housing. “What you effectively do is drive up the price of housing with every mandate that you impose,” he said. “We have some significant challenges right now. Part of what we need to do in Colorado Springs is increase the supply. Mosaica is going to be a great project for that. There’s some factors that are within our control, there’s some factors, like lumber prices, that aren’t. Lumber has gone up more than 100 percent in the last couple of years. That’s more of a national issue we need to address, in terms of the ability to obtain the necessary lumber to build homes.”

Elected officials aren’t the only ones grappling with the housing problem in Colorado Springs. Max Kron-stadt and Liam Reynolds are part of the Colorado Springs Pro-Housing Partnership. “We are a grassroots coalition-based community organizing effort aiming to bring neighbors in Colorado Springs together in support of city policies that will make housing more affordable,” explains Kronstadt. “It’s an informal coalition, but the goal is to bring voices to city government who will advocate for the kinds of things that we need to do to solve our affordable housing crisis.”

The Colorado Springs Pro-Housing Partnership is hosting a panel discussion to address affordable housing concerns in Colorado Springs. Panelists are Kat Lilley-Blair, CEO of Family Promise of Colorado Springs; Prentiss Dantzler, professor in the Urban Studies Institute at Georgia State University and former professor in the Sociology Department of Colorado College; Jennifer Steffel Johnson, associate chair of the University of Colorado at Denver Department of Urban and Regional Planning; and Anna Nelson, organizer of Neighbors for More Neighbors, a Minneapolis-based grassroots advocacy group.

“The event on March 25 is a panel discussion; it’s called ‘A City for Everyone: How Zoning Can Ease the Affordable Housing Crisis,’” says Kronstadt. “The goal of it really is to help educate the local community about the impact of zoning on the affordable housing crisis, the history of zoning, where it came from, and all the other effects it continues to have on our city and across the country. We’ll also give an update on the RetoolCOS process and invite people to participate.”

Reynolds notes that the cost of housing has outpaced consumer incomes. “Before the pandemic, just over 30 percent of all residents and 50 percent of our renters were housing-cost burdened, spending 30 percent or more of their income on housing,” says Reynolds. “That makes it really hard for people to afford other necessities like health care, food, clothing. It also puts people at a greater risk of eviction or forced displacement because they can no longer afford to live where they are. Since the pandemic those numbers have probably only gotten worse. The cost of housing, regardless of the pandemic, is rising much faster in Colorado Springs than wages.”

Kronstadt says tweaks to the zoning code could be a solution. “The city of Colorado Springs is currently undergoing a process called RetoolCOS, which is a comprehensive revision of the zoning code,” he says. “This is the kind of thing that only happens every 24 to 30 years or so. Zoning has a major impact on affordable housing. Right now, roughly 83 percent of our residential land in Colorado Springs is zoned for single-family use. That means that on 83 percent of our residential land — more than four-fifths — the only kind of housing that’s allowed is the most expensive type. It also limits the total amount of housing we’re able to add because so many of our neighborhoods are built to their zone capacity. What we really want to see the city do is allow more affordable kinds of housing, things like duplexes or townhomes. Smaller, sort of neighborhood-scale units of housing throughout the city, so we can have those more affordable options to meet our diverse needs.”

In addition to Mosaica, Nicklasson is working on a new development called Kaleidos. “It is on Murray Boulevard, between Fountain Boulevard and Chelton Road,” she says. “It is a very similar product. Once again we’re building for families, and we’re going for what I’ve heard Mayor Suthers refer to as ‘workforce housing,’ or ‘attainable housing.’ The location is amazing.”