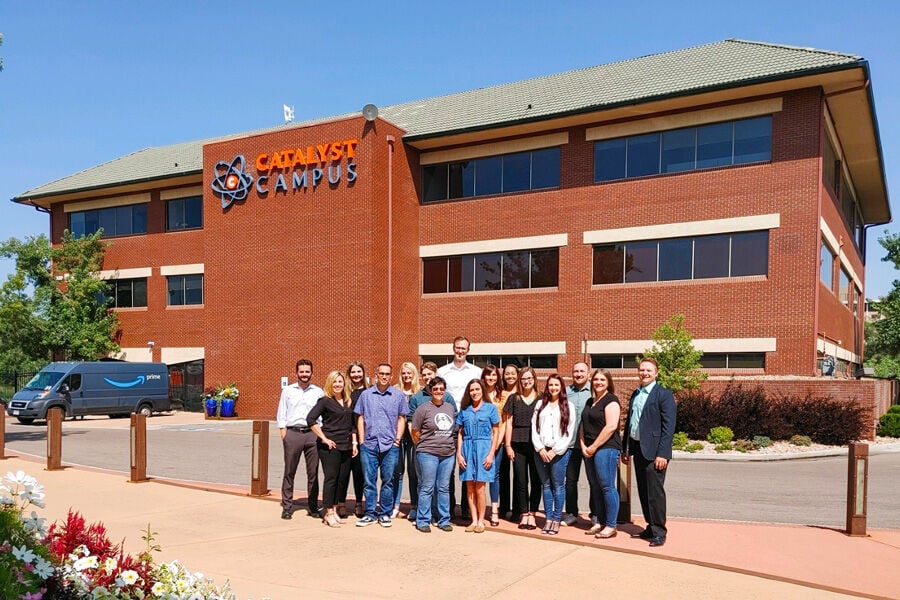 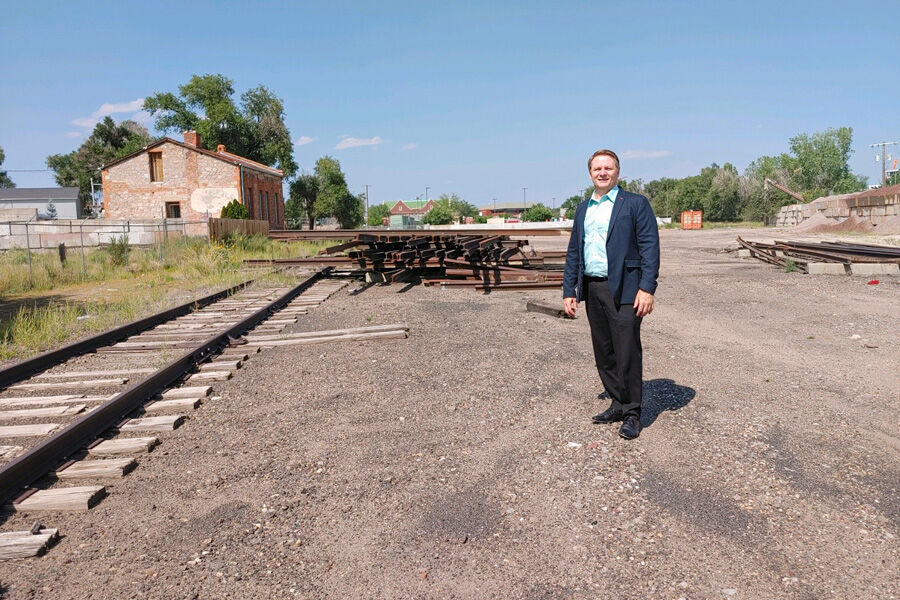 Started just six years ago, the Catalyst Campus for Technology and Innovation is bursting at the seams, triggering an ambitious expansion plan that will cost $68 million for infrastructure and overhaul a part of eastern Downtown.

While the U.S. Olympic & Paralympic Museum and Weidner Field have arisen in the southwest portion of Downtown, and bars and restaurants have lined Tejon Street with apartments popping up all over the city’s core, not much has happened to the core’s east side.

But that sector might be coming into its own soon with hundreds of apartments being built or planned, a parking garage going up and plans taking shape for the vacant Gazette building and the old St. Francis Hospital.

Now, a proposal by the Catalyst Campus, located in the historic Atchison, Topeka and Santa Fe rail line depot and related buildings, will further boost Downtown’s east and southeast side, says its founder Kevin O’Neil.

Owner of The O’Neil Group Co., O’Neil is an entrepreneur with interests in residential and commercial real estate development and aerospace and cyberspace technology. He also says he tries to incorporate a community development component into his projects, and that the expansion of the Catalyst Campus will do that.

“We are a community builder instead of a developer,” O’Neil tells the Indy. “We’re trying to improve and clean up the neighborhood. We see a lot of transient behavior over there.”

City Council was due to be briefed Aug. 23, the day the Indy went to press, but City Council President Tom Strand says he’s excited about the project, and Councilor Bill Murray says via email, “This proposal could help the city expand on its technological footprint, which is still small in comparison to most cities.”

The Catalyst Campus features program areas, executive offices, research and development facilities, and meeting spaces. Those include the Catalyst Space Accelerator, sponsored by the Air Force Research Laboratory’s Space Vehicles Directorate, which promotes commercially-augmented technology advancement. It’s hosted nearly 50 companies worldwide and secured over $48 million in follow-on funding from government and private investors. Another is Space CAMP, a software factory focused on the development and deployment of Space Force mission applications to the warfighter.

We are a community builder instead of a developer.

Tucked off the confluence of Pikes Peak and Colorado avenues on Downtown’s east side, the campus has gradually outgrown its facilities, leading O’Neil to propose creating two metropolitan districts and a business improvement district totaling 15 acres.

If approved, the Catalyst BID would be one of 16 business improvement districts in the city; two others are pending approval, city records show. The city has roughly 46 metropolitan districts and approvals of another 16 are pending.

The Catalyst’s districts would impose up to 50 mills on property tax bills to fund expansion and 10 mills for operations and administration. The districts also could adopt a public improvement fee, which essentially is a tax on sales.

Work includes upgrading utilities and high-speed fiber on the east side of downtown, a move that would benefit surrounding property, he says, as well as continuation of the Legacy Loop public trail.

O’Neil says former President Donald Trump’s decision to locate the headquarters of the new Space Force from Peterson Air Force Base here to Huntsville, Alabama — a move local business people and authorities have challenged — won’t curtail development of the aerospace contingent in Colorado Springs, and the Catalyst Campus plays a key role in that.

“We’re seeing new programs evolve every day,” he says. “Not everything can go to Huntsville when we’re the space capital. We have the industrial base. The current labor force that is working under Space Force that would be redirected to Huntsville, we believe 75 percent of those employees will not leave Colorado Springs. We’re fine either way.”

That’s because demand is so great. “We’re full and our demand is to build new for the customers here and others who want to move here.”

While the proposal calls for authority to issue up to $90 million in bonds to finance the project, it estimates actual cost around $68 million. O’Neil says that, assuming Council approves the service plan and creation of the districts in mid-September, he hopes to market the bonds in November and begin construction next year. (O’Neil acknowledged he will buy some if not all the bonds, though he expects other investors to step in.)

The districts would cut a swath through the old rail yard and span from Colorado and Pikes Peak avenues on the north to Costilla Street on the south, and from Wahsatch Avenue on the west to Shooks Run on the east. It would not incorporate the adjacent Transit Mix site right away, though O’Neil says he’s working on buying that. O’Neil’s project would abut the former Gazette building and St. Francis Hospital, which lie within the 23-acre GSF Business Improvement District and GSF Metropolitan Districts 1 and 2, controlled by Norwood Development Group.

Those three districts plan to issue up to $100 million in debt to fund utilities, two parking garages, drainage improvements, parks, streetscapes, landscaping and public art. Redevelopment would bring town homes, apartments, a hotel, retail and office space and other commercial uses. The districts have formed, and an election slated this fall to exempt the BID revenue caps imposed by the Taxpayer’s Bill of Rights.

Council President Strand says formation of metro and business districts has served as a successful tool across the state, in terms of providing funding, because they create a revenue stream that allows development to pay for itself.

He notes the Catalyst Campus is “exploding,” so an expansion makes sense and would provide space for defense contractors and create jobs for those graduating from local colleges with technical degrees.

UCCS and Pikes Peak Community College have recently adopted programs to feed graduates into the high tech and aerospace sectors, and on Aug. 20 the U.S. Space Force and University of Colorado announced a new partnership program.

Councilman Murray says regardless of Space Force’s location, O’Neil’s plans could help the city expand its technology profile while, combined with Norwood’s projects, “help anchor this side of town.”

But the project won’t necessarily address the citywide lack of inexpensive broadband, which has left the city as a “snail mail destination,” Murray says. That said, he favors creating the districts.

Strand says the project and other new developments will force the city to further investigate its ability to provide city services, from transit to police protection.

“In terms of public safety, I do have a concern about the Colorado Springs Police Department, because we’re about 100 sworn police officers less than what we need,” he says, adding that 80 recruits will begin an academy this month.

“This is going to create more demand, more businesses, more people, more activity, and I worry about that a lot,” he says. While the Fire Department is “well positioned” in the Downtown area, Strand wonders about transportation, from adequacy of roads to transit.

“That’s a good question,” he says. “We will have to look into that.”

Since the City for Champions tourism package started to take root in recent years, bringing the Olympic & Paralympic Museum to the southwest side, along with the soccer stadium and Colorado College’s almost-completed Robson Arena, Downtown has boomed.

Several new taxing districts have been established, notably near the museum, to fund high-rise office space and apartments. The city overhauled Vermijo Avenue to encourage foot traffic, and the city recently landed a $1.6 million Colorado Department of Transportation grant that’s earmarked for Phase 1 of a project to spruce up Tejon Street from Colorado Avenue to Boulder Street. The first phase will address two blocks from Colorado to Kiowa.

Despite lockdowns brought on by the COVID-19 pandemic, restaurants have opened shop, bars are humming and apartments are sprouting like weeds. Multi-story apartment buildings have been built or are underway throughout Downtown, bringing thousands of units to what used to be a dearth of living quarters, notwithstanding Citywalk built in 1962 at 417 E. Kiowa St.

333 ECO Apartments at Colorado and Wahsatch opened in the last couple of years, while Pikes Peak Plaza Apartments is under construction on three acres on the northwest corner of Prospect Street and Pikes Peak Avenue, including a multi-story parking garage.

Now, O’Neil’s plans will further advance development in that vicinity.

“With O’Neil Group it’s a win-win because not only are existing properties going to be improved and new spaces constructed, but with all that comes a highly talented workforce — well-paying jobs and growing companies. That’s an incredible opportunity for Downtown,” she says.

Edmondson adds that her agency foresaw the transformation some years ago, due to O’Neil’s investment. She says some 1,500 apartment units in the southeast quadrant of Downtown — all east of Nevada Avenue — were recently completed, under construction or soon to break ground. She estimates 3,000 units completed, under construction or breaking ground next year throughout Downtown.

“What we see now is the east side of Colorado Springs [Downtown] is becoming the cool place,” O’Neil says. “The amount of vertical apartments is more than anyplace else in Downtown. The [Catalyst Campus] is doing its part to bring that economy and jobs and the quality of streets there. If you get over there and see what we’ve done in the last five years, you’d be amazed.”