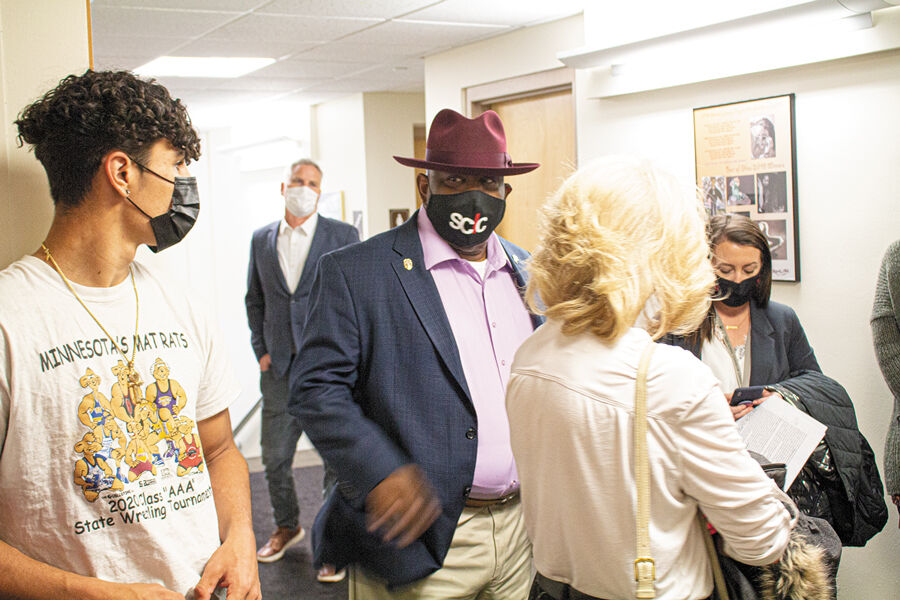 Allen, in hat, accused the Board of Education of harming “poor Blacks” in D11. 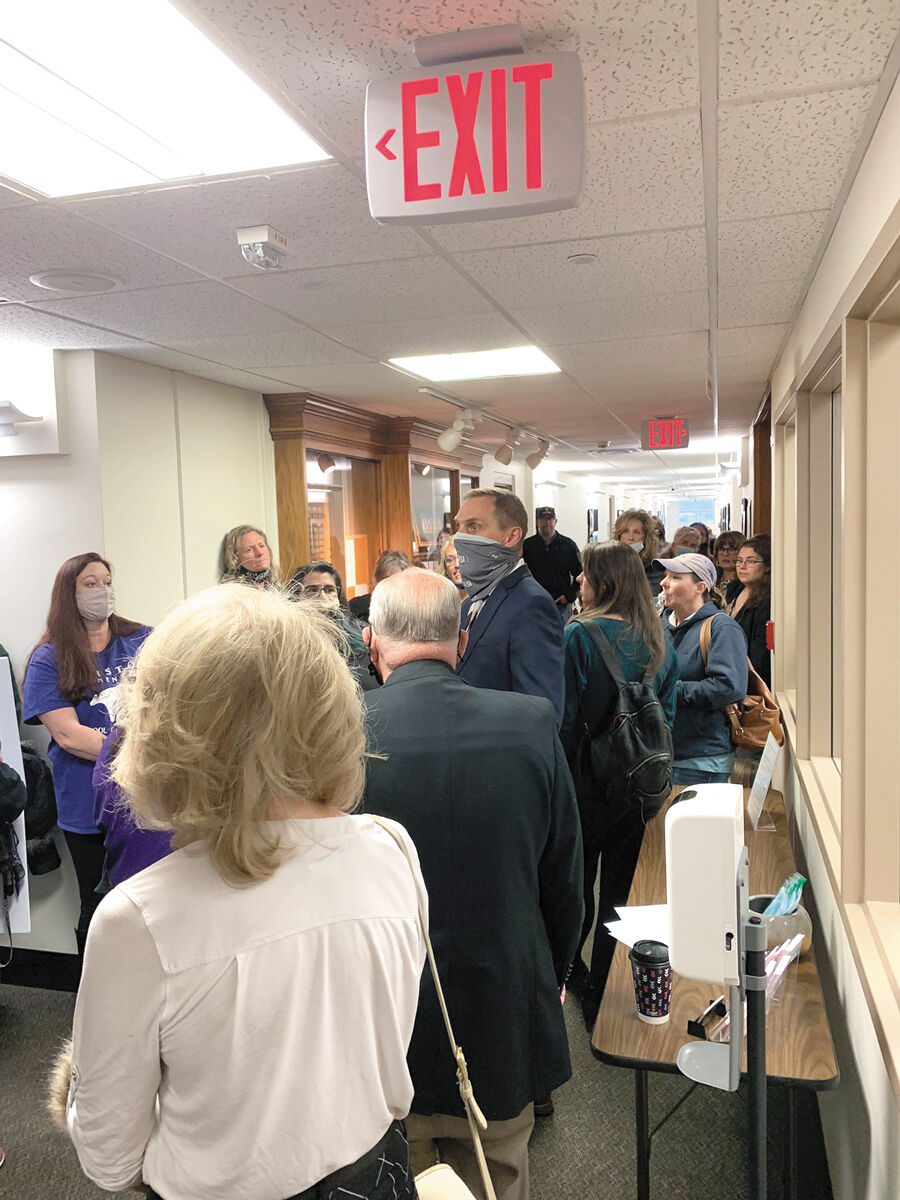 Colorado Springs School District 11’s April 14 Board of Education meeting featured such a plethora of public commenters — many refusing to wear masks in the increasingly crowded administration building’s hallway — that Deputy Superintendent Dave Engstrom had to arrange for overflow viewing of the meeting in an adjacent building due to capacity restrictions.

The majority of people who signed up to speak during the public comment period of the meeting raised concerns about D11’s current student mask policy, which requires all students and teachers to wear masks while in district buildings.

The effort to galvanize parents and commenters to speak against masks in schools was organized, in part, by conservative political activist group FEC United. Since its inception, FEC United has organized rallies and events around conservative causes, such as the Oct. 10, 2020, rally where participant Lee Keltner was killed by Matthew Dolloff, a Pinkerton-contracted security guard for 9News. The group was also accused of interfering in El Paso County GOP elections.

On April 13, FEC United sent an email to its members informing them, “D11 in Colorado Springs has a Board of Education Meeting Wednesday April [14]. Stacy Adair, the Education Pillar Chair for the Pikes Peak Chapter will be speaking at the meeting about her concerns about masking students.” The email provided members with instructions for how to submit comments online or sign up to speak in person.

Parent concerns over COVID-19 precautions in public schools, from remote learning to class sizes and masks, have been a constant since the start of the pandemic. The April 14 school board meeting came as Gov. Jared Polis made the state’s COVID-19 dial restrictions optional for local jurisdictions. In El Paso County, city and county officials have declined to impose any additional restrictions beyond what the state has implemented.

“For the health, safety, and vibrancy of our community, we strongly urge everyone to continue to take the disease seriously and make the best personal decisions regarding the vaccine as we reopen,” said El Paso County Board of Commissioners Chairman Stan VanderWerf in an April 15 news release regarding the easing of restrictions. “We ask all citizens to respect the choices businesses make as they embrace these changes and choose how best to keep themselves and customers safe.”

“We ask all citizens to respect the choices businesses make as they embrace these changes and choose how best to keep themselves and customers safe.”

However, schools are not businesses, and mask requirements in educational settings come not from individual school districts, but from Polis’ Executive Order D 2021 79, which mandates masks or facial coverings for “Preschool through grade 12 schools (including extracurricular activities), child care centers and services, and indoor children’s camps.” That fact did not stop the seven public commenters, who in addition to parents of students in the district included a D11 teacher, a home-school parent, a doctor of osteopathy and Henry Allen Jr., president of the Pikes Peak Southern Christian Leadership Conference, from criticizing the D11 Board of Education and spreading misinformation about masks and COVID-19, which has killed 779 people in El Paso County since the start of the pandemic.

“As a public school teacher in District 11, I am required to be a mandatory reporter of child abuse and neglect,” said Stacy Adair, a teacher at Wilson Elementary. “I’m here today to report neglect and possible abuse by School District 11 itself.”

Adair drew attention to a soiled mask from “a kindergarten boy in my first group of the day less than an hour into school,” and argued that wearing soiled, reusable masks poses a health risk to students. Adair provided the student with a disposable mask to use instead. Disposable masks for students without appropriate face covers is a contingency planned for in D11’s “Return to Learn” plan.

Adair also cited an unnamed Canadian epidemiologist, claiming, “Surgical and cloth masks used as they currently are have absolutely no impact on controlling transmission of COVID-19, and currently show that facemasks can be harmful.”

The Centers for Disease Control and Prevention’s website notes, “COVID-19 spreads mainly from person to person through respiratory droplets. Respiratory droplets travel into the air when you cough, sneeze, talk, shout, or sing. These droplets can then land in the mouths or noses of people who are near you or they may breathe these droplets in. Masks are a simple barrier to help prevent your respiratory droplets from reaching others. Studies show that masks reduce the spray of droplets when worn over the nose and mouth.”

Mary Harrow, a doctor of osteopathy, which is a branch of medicine that focuses on the manipulation and massage of the bones, joints, and muscles, also weighed in on the mask issue. “I’d like to receive the safety evidence you have guiding you to have made this decision to continue to enforce the wearing of masks,” said Harrow. “I have just some easy data for you on just the opposite. The physiological effects — low oxygen, that’s kind of a no-brainer, high carbon dioxide and other gases from metabolic processes, which I started looking into it’s almost 80 different chemicals that we expel as toxins, shortness of breath, high lactate concentrations, decline of pH levels, acidosis, toxicity, inflammation, the self-contamination that happens, like you touching your mask, we wouldn’t permit that in the medical field, increase in stress hormones adrenaline, cortisol, noradrenaline. This causes fat breakdown, increasing sugar to be in the body, which increases risk for diabetes, obesity and hypertension.”

On the subject of mask safety, Vanderbilt University Medical Center’s website notes, “Prolonged use of any face mask, including the N95 respirator, has not been shown to cause carbon dioxide toxicity or lack of adequate oxygen in healthy people. For some persons with severe chronic lung disease, wearing a mask may make breathing more difficult, but not because of CO2 retention. Cloth masks reduce the number of microorganisms that someone releases into the air. So, the more people wear masks in an area, the fewer potential viral droplets go into the space, and the less risk that someone will be exposed to the virus.”

Allen, who was removed from leadership of the Colorado Springs NAACP in 2015, claimed D11’s mask policy was doing harm to “poor Blacks” in the district.

FEC United has shown a marked interest in local school boards in 2021. The group took part in the February attempt to recall the entire Douglas County School Board over its stance on remote learning, using its weekly emails to encourage members to sign and support recall petitions. The recall effort ended March 3 when Douglas County agreed to return to 100 percent in-person learning. On April 9 The Denver Post reported that COVID outbreaks had shut down in-person learning at five Douglas County schools.

repeatedly claimed on his podcast, Conservative Daily, that public schools are “indoctrinating” students with leftist ideology and that teachers are “recruiting” kids to be gay or transgender. FEC United’s email newsletters have expounded on those claims, warning members about “critical race theory” and “young people embracing socialism,” and the influence of teachers unions.

During her April 14 comments, Adair blamed the Colorado Springs Education Association for D11’s mask policy. “Why do you require more than the state mandate itself while upper class kids breathe freely and cleanly all day during school?” she asked. “I submit the answer is the Colorado Springs Education Association. The teachers union is pressuring District 11 to do things that satisfy their loudest members.”

According to Devra Ashby, the D11 chief communications officer, the district’s mask policy is not part of a union demand. “D11 staff reviewed and took guidance from El Paso County Public Health (EPCPH), Colorado Department of Public Health and Environment (CDPHE), other schools/districts, and the Governor’s office (mask mandates/guidance),” she said via email. “While staff works collaboratively with CSEA, the union does not dictate the recommendations or policies that are put into place.”

Joe Schott, the president of the CSEA, said that due to conflicting views amongst union membership CSEA declined to take an official position on masks or other COVID measures.

FEC United has a history of making statements whose claims have been contested. The organization and Oltmann are currently named in a defamation lawsuit from Eric Coomer, a Dominion Voting Systems executive, who claims Oltmann “fabricated a conspiracy” that Dominion voting machines stole votes from Donald Trump during the 2020 presidential election. Dominion’s defamation counsel noted in a December cease and desist letter that Oltmann made up, “out of whole cloth, the outlandish story that [he] ‘infiltrat[ed] Antifa’ and overheard a conference call detailing Dominion’s improper conduct.”

Despite the controversy around FEC United, Ashby notes that Adair’s involvement with the group is not against any D11 policies. “D11 does not have anything in policy or in handbooks specifying the types of activities or organizations that our employees can be involved in outside of the workplace,” she said.