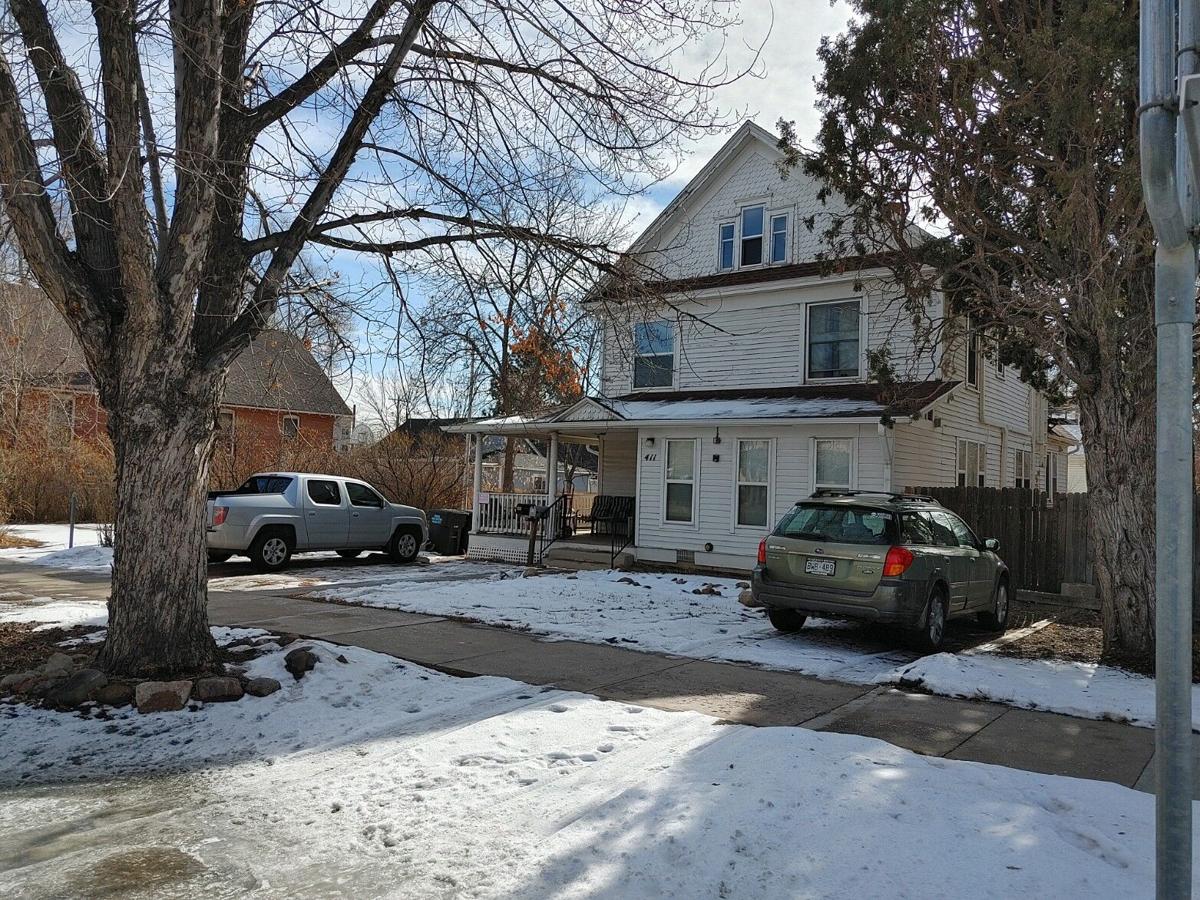 The house at 411 W. Bijou St. was sold to a developer, who plans to convert the house into market-based rental housing. 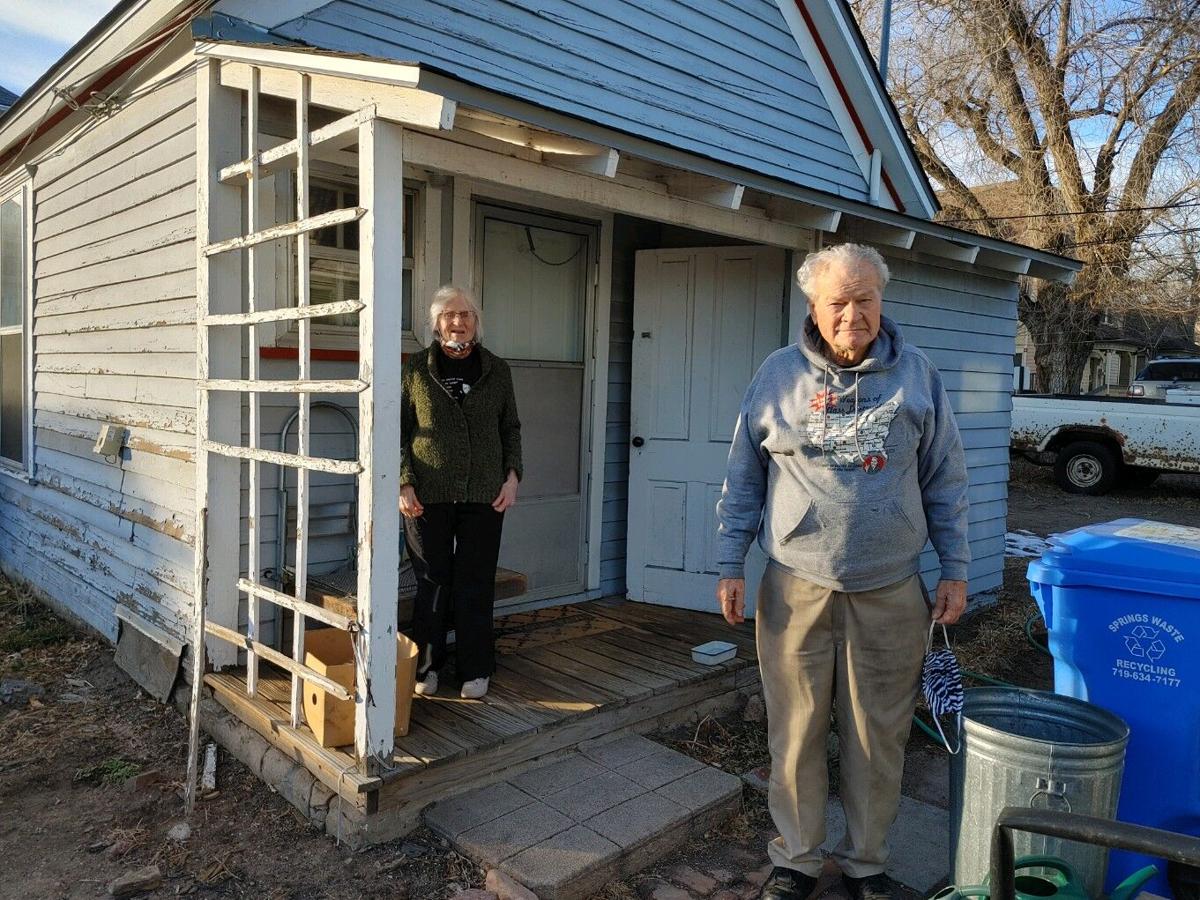 Esther Kisamore and Bill Sulzman are long-time Ithaka members and residents who worry they'll have to move after their homes were sold to a developer who plans to convert their homes into market-based rentals. Both signed the letter to the AG's Office. 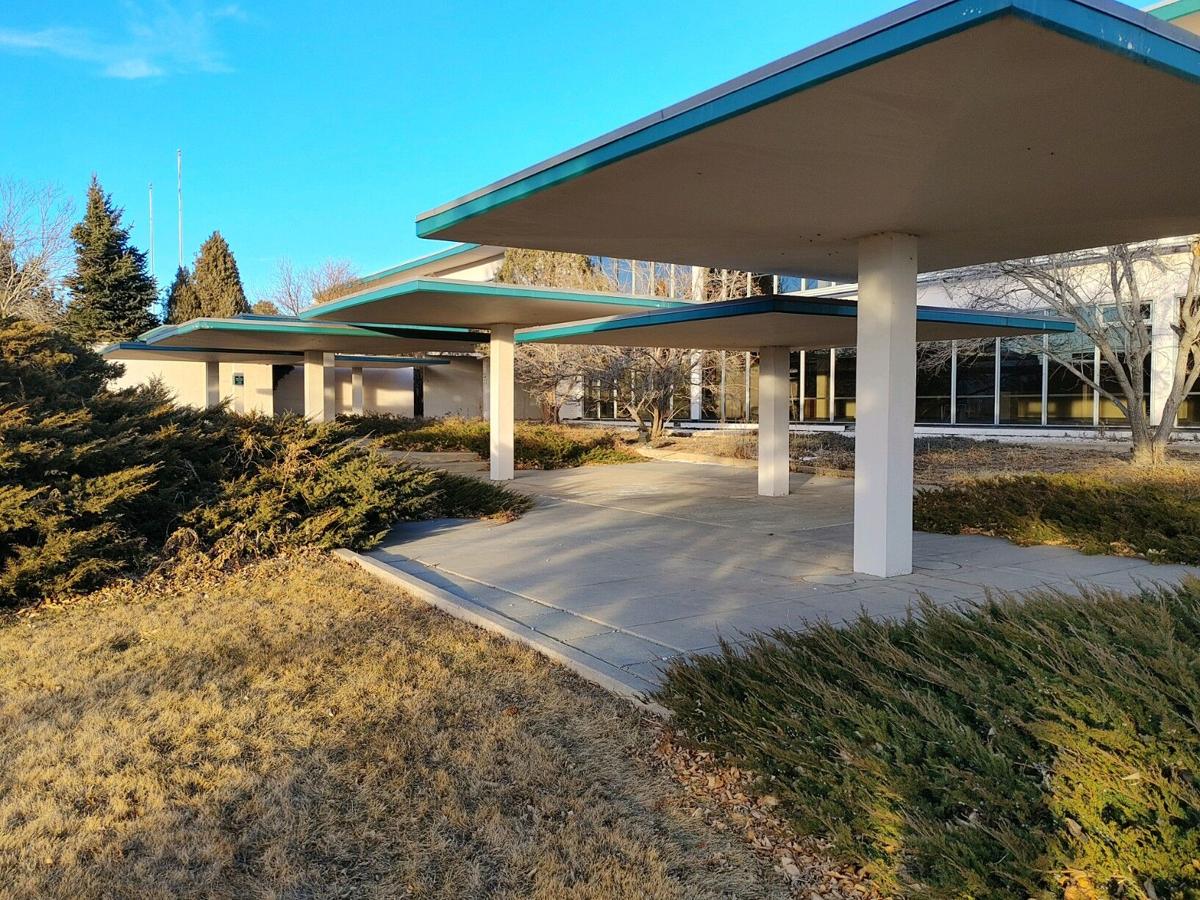 Ithaka plans to build new transitional housing at 301 S. Union Blvd., a nine-acre tract for which City Council approved rezoning from public facility to office complex on May 11. Ithaka's buildings will occupy only a portion of the property, with retail, office and townhomes planned for the site.

A group of former board members of Ithaka Land Trust has asked Attorney General Phil Weiser’s office to investigate the nonprofit's recent sales of nearly half its 21 properties to one chosen developer at prices below market value, while loaning $555,717, interest free, to the same developer on three of those sales.

The transactions represent a radical departure from Ithaka’s original mission when established in 1981 to care for the poor and provide permanent low-income housing.

Attorney Jennifer Gilbert, with GPS Legal Solutions of Denver, says in her May 5 letter some of Ithaka’s actions — all under the leadership of Ithaka director Anjuli Kapoor hired in October 2017 — might constitute violations of Colorado law.

Calling the sales a “pattern of puzzling financial dealings,” Gilbert writes, “These individuals request that the Attorney General investigate this letter of complaint regarding the nonprofit corporation and determine the appropriate way to proceed given the circumstances.”

Kapoor and the current Ithaka board didn’t respond to an email seeking comment, but Kapoor has asserted previously that Ithaka has shifted to transitional housing, not permanent housing. She’s also said the properties had fallen into disrepair and would have required a $1 million maintenance investment — a contention that Ithaka advocates challenge.

Among those backing the letter to the AG is Melissa Marts, program development administrator with the local Area Agency on Aging office.

“I do not agree that the existing model was unsustainable,” Marts says in an email. “I believe the Executive Director and Board got excited to be partners with a new endeavor and now older, at-risk residents are being kicked to the curb through a social work management system that has gone awry.”

The AG Office declined to confirm whether it’s investigating and offered no further comment.

Meantime, City Council on May 11 voted unanimously to rezone 9 acres on South Union Boulevard, across from Memorial Park, from public facility use to office complex to accommodate a transitional housing project there planned by Ithaka Land, the new name adopted under Kapoor's leadership, though its website calls it simply Ithaka. Council also unanimously approved the project's concept plan, which calls for 128 living units but only 20 transitional housing units.

That might be the last time Council weighs in, because Planning Director Peter Wysocki says the development plan, which will be submitted later, is subject to administrative approval only. If the plan seeks permission for conditional use outside the city's normal code, the proposal would require Planning Commission approval, he said. Only if someone appeals the Planning Commission decision would it come to Council after that, he said.

Gilbert’s letter cites a litany of facts as first reported by the Indy in its cover story on Jan. 7, “Price of progress,” followed by a story March 3, “When credit is due,” which reported Ithaka owes the city $629,000 for loans used to buy some properties it still owns.

All the houses were sold to Drew Gaiser, a Denver area firefighter and developer, between January and October 2020. Gaiser works closely with Colorado Springs firefighter Ryan Royal, who’s the son of the newly named Fire Chief Randy Royal, who engaged in redevelopment activities without reporting that work to the Fire Department, a violation of policy about which the CSFD refuses to comment.

Gaiser bought the houses for a combined total that was $692,292 less than the market values as reported by the El Paso County Assessor’s Office, whose property value listings generally run 15 to 20 percent below market because reappraisals for tax purposes trail the market by up to two years.

Kapoor previously told the Indy the properties required a substantial investment in repairs, and Gaiser agreed to buy them, thereby giving Ithaka cash to pump into a multi-family project to be built at 301 S. Union Blvd. A partner in that project, Legacy Institute, gained City Council approval on May 11 to rezone that property, though Kapoor hasn’t provided a cost estimate of the project.

She has said the board plans to sell all but two of Ithaka’s remaining properties, because the nonprofit’s focus has changed from permanently housing the poor to providing “transitional” housing for families who are expected to rent elsewhere at market rates after a temporary stay in an Ithaka property.

But some residents, such as Bill Sulzman and Esther Kisamore, are in their 80s and live on less than $1,000 a month, so they say finding a market-based rental is next to impossible.

The founding mission, and the one guiding the nonprofit at that time, stated that “property is held in perpetuity for the benefit of people with limited incomes, and to promote the value of living in an inclusive neighborhood.”

Of particular angst to Ithaka Land Trust’s former board members and supporters was the sale last October of the “Bijou House” at 411 W. Bijou St., the original Ithaka property. On the property, a columbarium was established years ago for burial of the cremated remains of Ithaka residents and others in the community, to include infants, homeless people and veterans. It’s the site of the “longest night” vigil to honor homeless individuals who have died due to lack of shelter, Gilbert wrote.

Ithaka has made no provisions for if, how, when and where the columbarium will be moved, though former Ithaka board members and supporters have asked it be returned to the Bijou Community, as they call themselves.

Gilbert also notes that Colorado Springs Utilities gave $40,000 to Ithaka in 2019 for a “capital improvement on the Bijou House,” the nonprofit’s 2019 annual report states.

Ithaka accepted the funding and “then sold the property for which it had received the improvement funding to developer Drew Gaiser’s COS Holdings 2,” one of a series of entities Gaiser set up to acquire the Ithaka properties.

Colorado law prohibits nonprofits from saying contributions will be used for one purpose and then using them for another, Gilbert noted in her letter. A violation of that law constitutes a deceptive trade practice under the Colorado Consumer Protection Act, she said.

“The nonprofit’s acceptance of funding for upkeep of indigent housing, merely to turn around and sell that same home, indicates a violation of this prohibition,” Gilbert wrote.

In all, Gaiser bought 10 properties without appraisals, without Ithaka opening bidding to others and at “well below market value,” Gilbert says. Moreover, Ithaka loaned $555,717, interest free, to Gaiser and Royal, who intend to rent the properties at full-market rates to non-indigent tenants.

“In Colorado, nonprofit directors are to exercise duties of care to the nonprofit, including acting in good faith for the nonprofit’s best interests,” Gilbert wrote, adding they’re also supposed to avoid transactions that involve conflicts of interest.

Gaiser’s partner, Royal, is the cousin of Ithaka Land’s program manager, Jonathan Royal. “The favoritism, generous financing, and private sales of the nonprofit’s housing, in direct contrast with its mission to house indigent members of the Colorado Springs community, warrants special concern given the familial relationships involved,” Gilbert says in the letter.

The original Ithaka Land Trust’s supporters turned to the Attorney General’s Office, the letter says, because that office is better positioned to investigate the transactions as they relate to the nonprofit’s mission, and any remedies or resolution of “any potential malfeasance” would be best executed by the AG’s office.

Marts, with the Area Agency on Aging, signed the letter, she says, because she believes Ithaka’s current board and director should have started a different nonprofit, not co-opted Ithaka Land Trust.

“As a community member with a long history in nonprofit work, I believe Ithaka was violating their by-laws and articles by first changing their name ... and then not honoring their mission of ‘providing housing in perpetuity,’” she says in an email.

“I am sad that so many lives of people who live in what was the ‘Ithaka Community’ are being displaced to make room for a new mission and vision,” she says, adding she doesn’t approve of the “misuse” of grant funds from Utilities and the city.

Mary and Peter Sprunger-Froese have been Ithaka Land Trust members for decades. Both signed the letter.

Peter served on the Ithaka board for 34 years, but left after Kapoor was hired and advocated for board members to have term limits.

In November 2019, Mary says, Kapoor contacted them and asked if they wanted the Ithaka house they were living in, calling it a “liability” due to needed repairs. They didn’t have money to buy it but were told they could have the house for $10, so they agreed, Mary said. They didn’t have money for the insurance, but the Bijou Community chipped in.

“We never had a goal of being a land owner,” she says. “Other members of the group said, ‘You’d better take it.’”

To this day, Mary Sprunger-Froese says they have no idea why they were given the house.

Despite benefitting from Ithaka in that way, Mary considers the sales of 10 properties to one buyer without competition and abandoning the original mission is “incredibly unethical behavior” and a violation of the original charter.

Mary disputes Kapoor’s contention the homes were rundown and said they were in “decent condition.

Peter Sprunger-Froese says by phone that members of the Bijou Community performed major repairs and renovations, including installing siding and windows and pouring concrete. “That’s how the rents could be kept so low,” he says.

But Kapoor didn’t seem interested in that, he says, or permanent housing for the poor. Rather, Mary says, she focused on hiring more employees and expanding social services.

“They are taking people who will be successful in their rubric. And those people do need help, but this [original Ithaka organization] was specifically for people who had the most trouble in perpetuity. We operated on the basis of community, trust, and that doesn’t fit with what she wants to do.”

Handen points out his group doesn’t oppose transitional housing. “We are opposed to selling off permanent, supportive housing at below market rates to friends,” he says.

Kay Liggett, which supports the original Ithaka agency, urged Council to think twice about what was sacrificed to help finance Ithaka Land's plans for the South Union Boulevard property — affordable properties for the poor, which now are gone forever. She also noted the site isn't close to a grocery store, a hardship for the elderly, who are likely to occupy some of the units in the complex.

"It's certainly beautiful, but you can't eat a view," she said.

Zachary McComsey, with Legacy Institute, which has teamed up with Ithaka on the new project, said his agency made a big donation to Colorado Springs Food Rescue, which he hoped would set up a food market in that area.

Councilor Nancy Henjum urged Ithaka and its critics to "have some good conversations, that you listen to each other." But the Bijou Community's pleas have largely been ignored, members report.

The letter to the AG's Office: 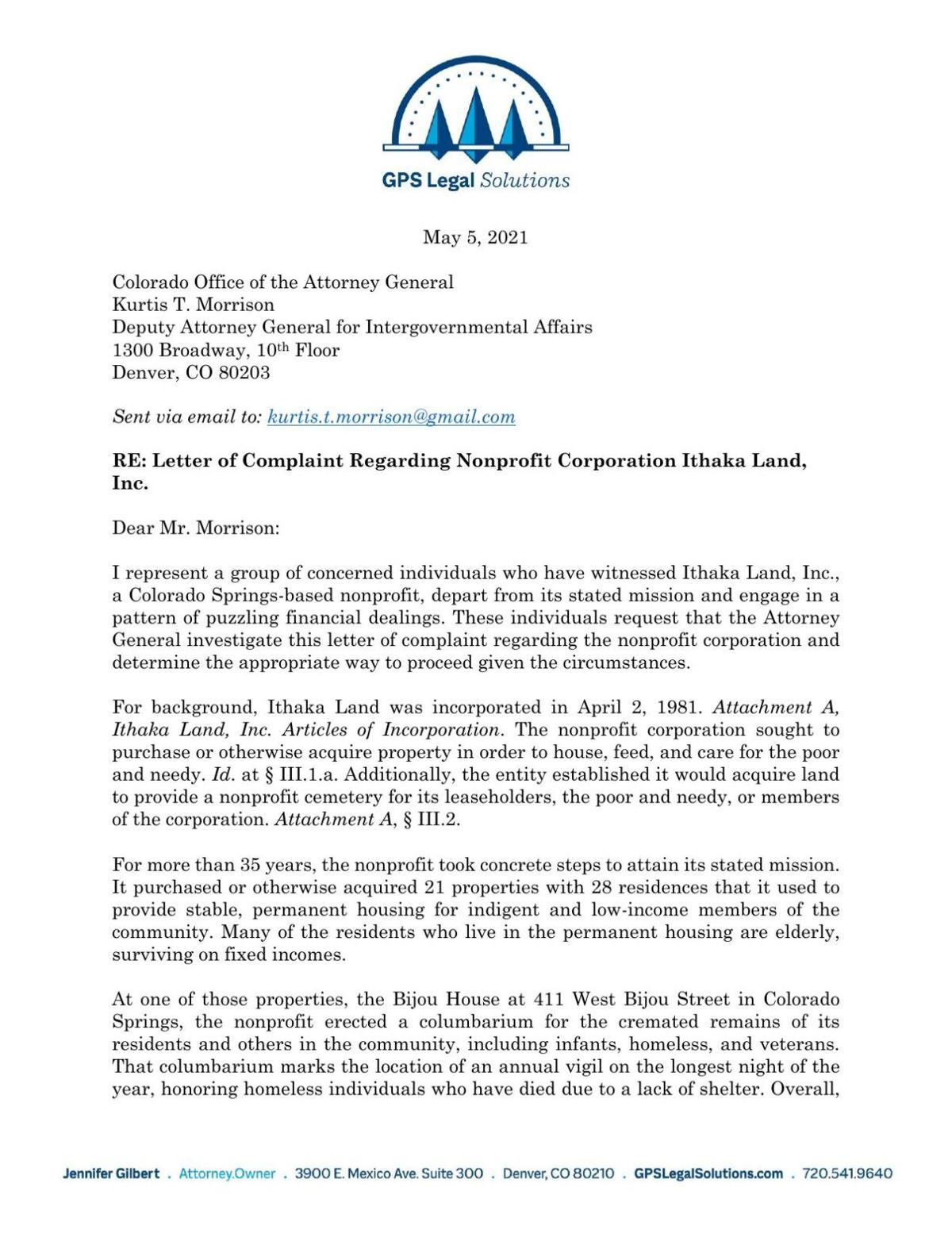