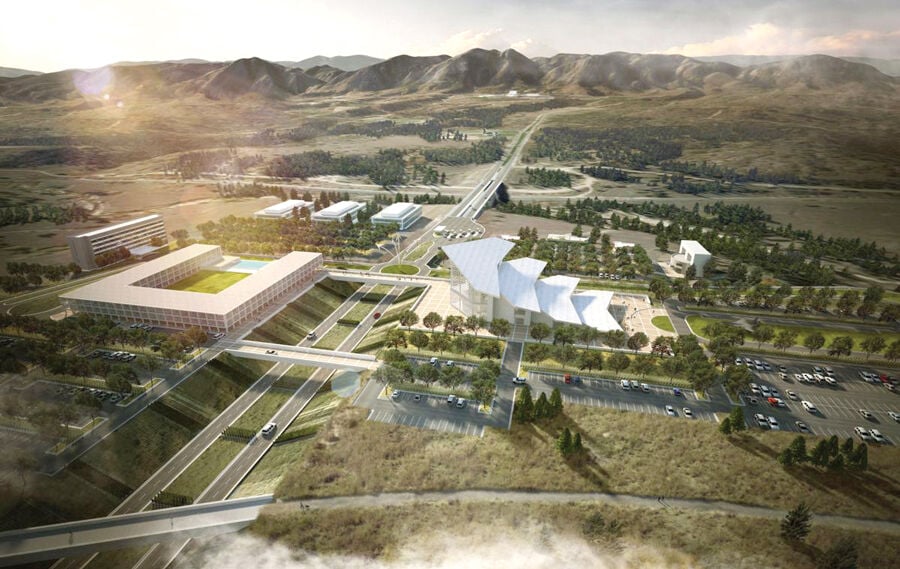 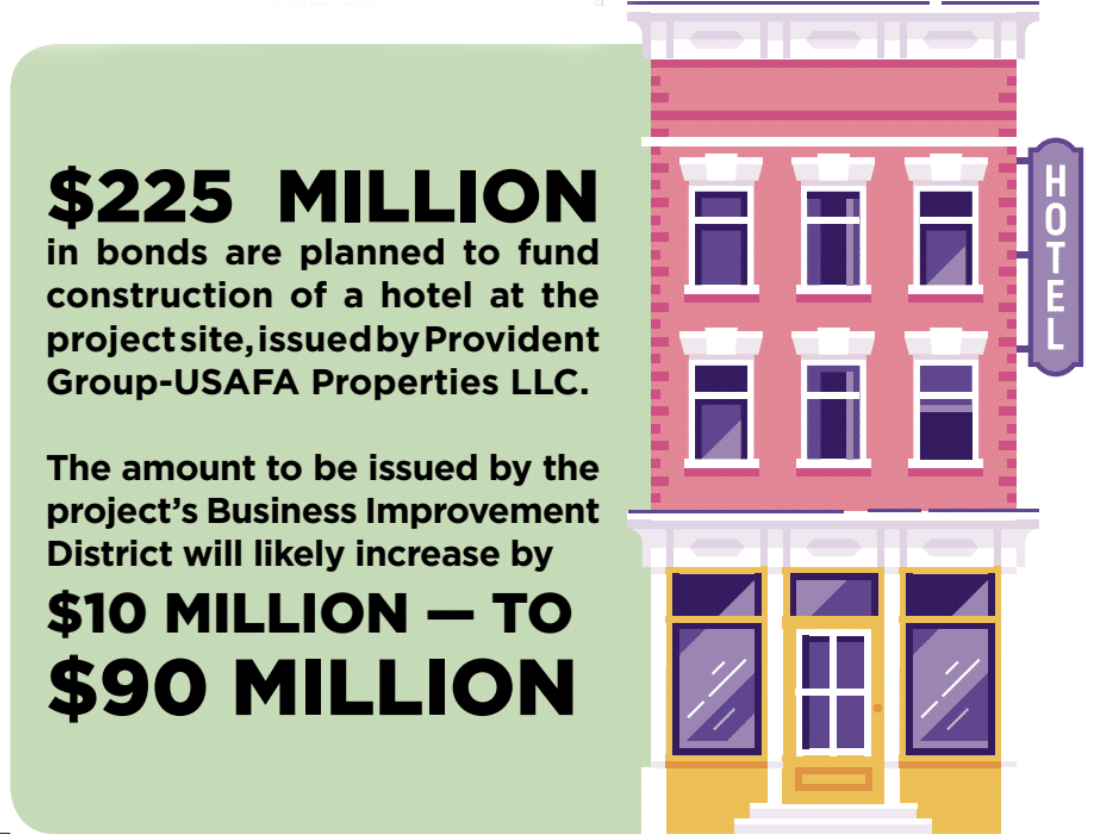 Initially delayed due to the bond market crisis as the pandemic took root a year ago, financing for the Air Force Academy Visitor Center project is now queuing up.

Blue & Silver Development Partners is likely to win approval from City Council in February to increase the amount to be issued by the project’s Business Improvement District (BID) by $10 million — to $90 million. That money will fund infrastructure for the Visitor Center, such as drainage, utilities installation, landscaping and architecture, and engineering for the 57-acre site.

The increase stems largely from escalating costs since the project was penciled out in 2019.

In addition, Louisiana-based nonprofit agency Provident Group-USAFA Properties LLC plans to issue up to $225 million in bonds to fund construction of a nearly 400-room hotel at the project site, at the Academy’s north entrance at Interstate 25.

Those tax-exempt bonds will be issued by the Arizona Industrial Development Authority (AzIDA), one of many such agencies across the country that issue tax-free bonds for quasi-public projects.

The bottom line: It appears the long-awaited Academy Visitor Center will finally get off the ground. It’s the last of five projects to get underway in the city’s City for Champions package of tourism attractions introduced in 2013.

“The reasons for the increase include increased costs due to the delay (updated studies, ongoing legal and consulting fees), construction cost increases and additional flexibility needed in response to actual bond market conditions,” the city’s Economic Development Officer Bob Cope says via email. He adds the $90 million is a cap, noting, “the intention is to issue bonds well below that number.”

The bonds would be repaid using a combination of revenue from property taxes, specific ownership taxes, public improvement fees and property and sales tax increment financing (TIF) from the overlying urban renewal area and the state Regional Tourism Act revenues, according to city council agenda materials.

TIF funding is the tax revenue generated by the development above a pre-development baseline. The proposed TIF is 1.75 percent in sales tax, not the full 2 percent levied by the city.

BIDs are legal entities separate from the city, though their operating plans and debt limit require council approval. The BID, not the city, is responsible for repaying the debt.

The plan calls for BID bonds to carry interest rates that could vary from 5.25 to 7.75 percent.

The bond documents allow for a 50-mill property tax mill levy for debt service; the development also could impose public improvement fees of 3 percent on sales and a lodgers PIF of 2 percent. Deadline for issuance is the last day of 2021.

“We’re very excited about changes in market conditions and changes in the project,” he said. “We are progressively moving forward on all quadrants of development. The most exciting element is the bond market is heating up. Lots of cash has come into that market.”

He noted an indoor skydiving facility has been dropped from the Visitor Center, but will be constructed east of I-25.

The rest of the project, which will include an office building and the Visitor Center, is “shovel ready,” he said.

Councilors Don Knight and Bill Murray scolded Schnepf for not fully informing city officials of plans surrounding the hotel. The Arizona bond issuance requires a public hearing as a matter of course under tax laws, and the hearing announcement that appeared in the local daily newspaper’s legal notices caught them by surprise.

“I share Bill’s initial frustration,” Knight said. “I don’t like surprises.” Though the city has no role in those bonds, Knight said, “It might be nice to know that beforehand and save on our blood pressure.”

Murray expressed opposition to the idea of the BID issuing debt that will be used to help install public infrastructure to enable the hotel project.

“If the infrastructure was directly related to the Visitor Center, we’re OK,” Murray said. “But to authorize expansion of this to include a 425-room nonprofit hotel that competes directly with every hotel in our community, that passes the line.”

Said Schnepf, “I can understand the shock and dismay of not understanding how the hotel connects to the project.”

The hotel, he said, has since cut the number of rooms to about 375. It’s separate from the work covered by the BID debt, and “is absolutely essential for the success of the Visitor Center and the bonds for it.” Cope said revenue from the hotel will flow to the city in the form of Lodgers and Automobile Rental Taxes.

Provident Group-Falcon Properties LLC, the hotel developer, is a subtenant of Blue & Silver Development Partners via a ground sublease agreement, Cope says in an email.

It gives a Baton Rouge address, according to Colorado Secretary of State records. As a nonprofit organization, it’s similar to dozens of other entities that build health care facilities, parking garages, hotels and convention centers, Patrick Ray, program manager with AzIDA, says.

The Arizona agency acts as a conduit for borrowers to access the tax-free bond market, under provisions of the Tax Equity and Fiscal Responsibility Act of 1982, he says.

The revenue generated by the project pays 100 percent of the debt; there are no taxpayer contributions, Ray says.

While most AzIDA clients operate in Arizona — of all bonds issued last year, only 10 were for out-of-state borrowers — there’s no prohibition against it, he says.

“Nonprofit doesn’t mean no profit,” Ray says. “It’s just how it’s set up. There’s plenty of money to be made by a nonprofit through nonprofit financing,” through the entities hired by the nonprofit for the management contract, for example, the so-called profits of which are governed by federal tax code.

Provident currently has another bond issue pending with AzIDA for a hotel convention facility in Puerto Rico, he says.

Created in 2016, AzIDA closed its first bond issue in December 2016 and since then has closed 91 bond issues with an aggregate principal amount of $5.7 billion, Ray says. “No bond issue of the Arizona Industrial Development Authority has ever defaulted,” he says.

Ray says the bonds likely will be issued within the next few months.

It’s unclear when ground will be broken on the hotel and the BID’s projects.

Council President Richard Skorman lauded the project, saying, “I’m excited about how the hotel will benefit the Air Force in our community.” For example, he said, defense contractors and military members could host conferences at the hotel, which also would serve families and others attending Academy events.

“That’s one reason I enthusiastically support this,” he said.

I appreciate your team worked through an incredibly odd scenario. Hotels and the hospitality industry have had a challenging time.

“I appreciate your team worked through an incredibly odd scenario,” he said. “Hotels and the hospitality industry have had a challenging time. I appreciate that you’ve adapted and not let [financing problems] hold you back.”