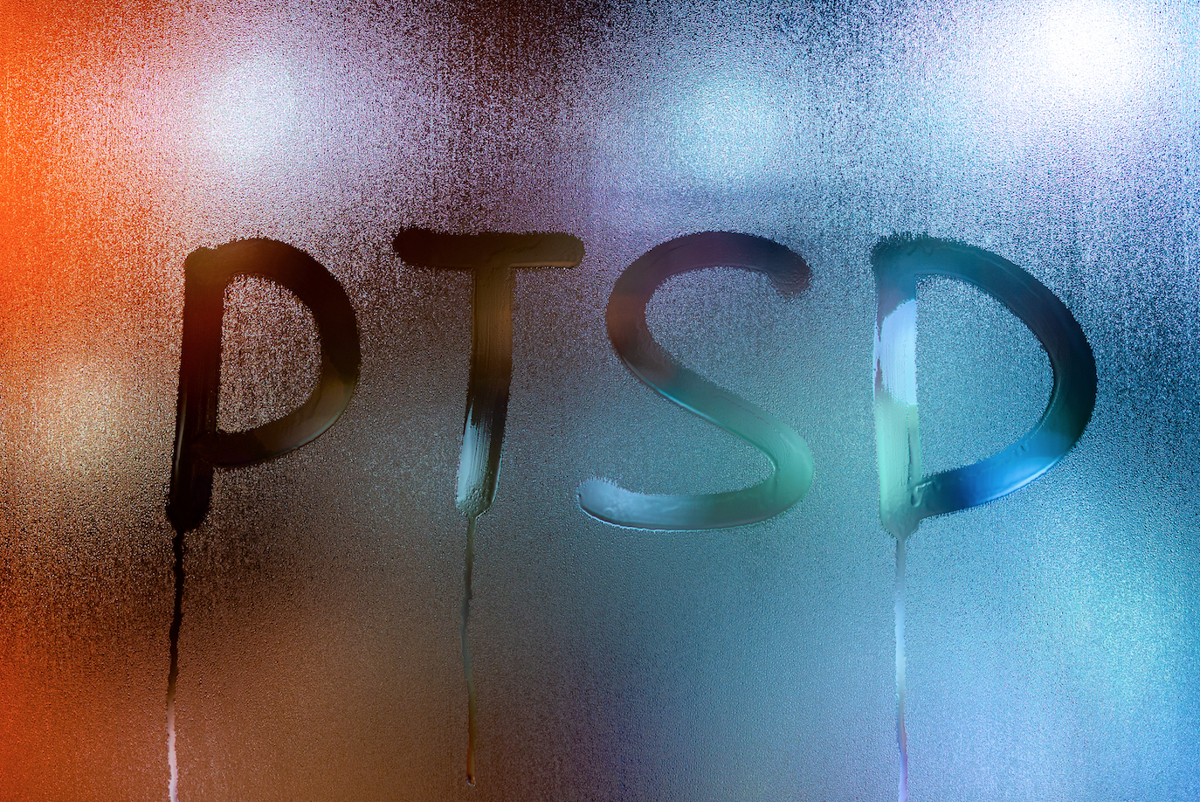 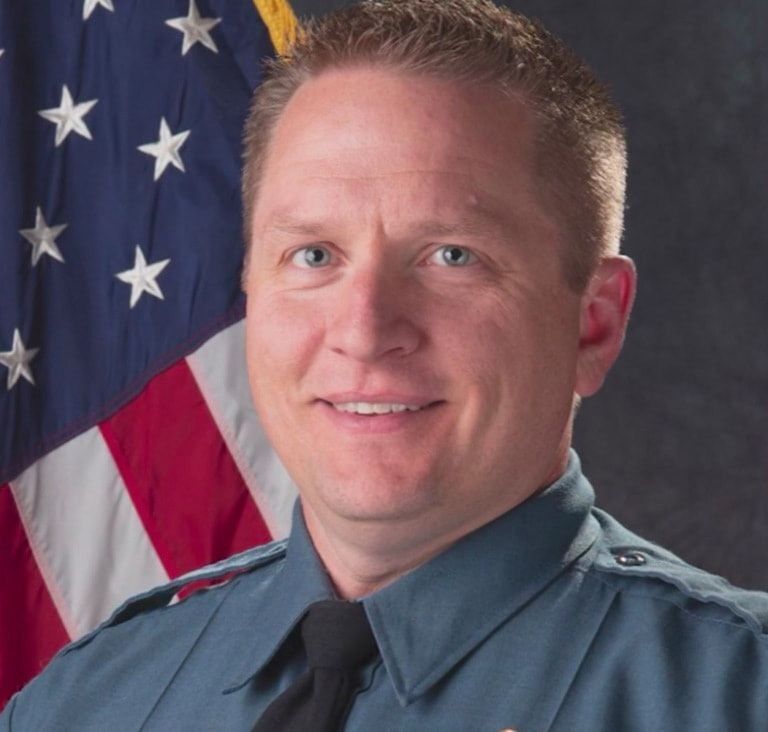 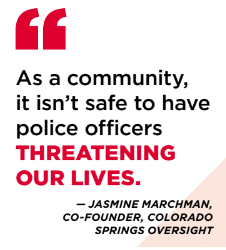 Despite widespread and vocal calls for the termination of Sgt. Keith Wrede, the officer who commented “KILL EM ALL” on a June 30 livestream of a Black Lives Matter protest, Colorado Springs Police Department Chief Vince Niski announced in an Aug. 10 news release that Wrede would not be fired (see p. 7 for details).

Colorado Springs Oversight is one of the community organizations calling for Wrede’s termination. Jasmine Marchman, co-founder of COS Oversight and an educator in Harrison School District 2, helped organize protests in front of the Colorado Springs City Administration Building calling for his firing.

“As a community, it isn’t safe to have police officers threatening our lives,” said Marchman during a July 22 protest. “I would have lost my job if that happened.”

Wrede’s comments came as activists and community members across the nation were — and still are — protesting and demanding meaningful, systemic changes to the practice of policing in the United States. In response to these protests, Colorado passed a sweeping police reform bill and the Colorado Springs City Council created a Law Enforcement Transparency and Accountability Commission (see p. 10).

Since the start of the protests, demonstrators across the country have dealt with increasing violence, not just from police but from counter-protesters. While Niski notes that “it was determined that [Wrede’s] comments were made off-duty out of frustration and there was no indication of any physical action or intent to cause harm,” such explanations seem hollow to those who have seen first-hand, and survived, the very real violence that such attitudes have inspired.

Niski made a redacted version Wrede’s internal affairs investigation into his online comments available to the community. The IA interview provides additional insight into the incident, and also illustrates the massive divide between citizens and law enforcement professionals that has contributed to our current crisis.

Law enforcement agencies are often described as the “thin blue line” that protects civil society from the worst of humanity. Like the military, they are set apart, tasked with a demanding, difficult job. Wrede has had a 20-year career with CSPD.

He claimed in the interview that he was “having a couple of drinks with my wife, trying to decompress,” the night he made the comments on Facebook, and that he was “having a very difficult time with the movement nation-wide and specific actions that — very specific actions that occurred that night that unfortunately made me see the protesters as nothing more than a terrorist organization that were out to kill the police, and they tried to kill the police the second night when they shot at Troy Bauer.”

CSPD public information officer Lt. James Sokolik confirmed with Indy reporter LJ Dawson that Bauer’s vehicle was shot during the protest in the early morning on May 31, and the investigation into that incident is ongoing.

As a veteran, I can empathize with Wrede. I know what it is like to have people try to kill you because of the uniform you’re wearing. I know what it is like to be surrounded by explosions and death and blood and chaos. I also know how incredibly difficult it can be to move on from those incidents. The battalion I was assigned to during my first deployment to Iraq was basically a case study in the effects of post-traumatic stress disorder (PTSD), resulting in a number of DUIs, murders and dishonorable discharges. For many veterans, the psychological damage of wartime service is a lifelong burden that requires serious lifestyle changes to manage. I left the military, quit drinking alcohol, did a lot of therapy and learned to recognize the symptoms and triggers of PTSD, which helps me manage it today. I was relatively lucky; many are not.

Before beginning the healing process, I did and said a lot of stupid, hurtful and offensive things that I regret. Wrede’s IA interview was painfully familiar.

The widespread protests of the last three months have strained departments across the country, and CSPD officers certainly felt the pressure.

“When I saw the bullet hole in Bauer’s car that night,” Wrede said, “I thought ‘Man, had that been my car I’d been telling [redacted] wife that he just got shot, you know what I mean?’ ... All this happened once I got home and had time to lay in bed and not sleep. The sound of the rocks hitting my Durango and the objects brought me back to that — that gun fire that night from Village Seven, that gun fire that day from Planned Parenthood. So the anxiety of all of that, it just built and built and built.”

Wrede made the Facebook comments the day before he was scheduled to take vacation. Unstructured downtime is something a lot of PTSD-sufferers struggle with. Soldiers on leave get into trouble, a large number of military retirees commit suicide. A kind of neurotic Protestant work ethic becomes a coping mechanism for PTSD symptoms. “The problem is when I get home when there’s no more tasks to accomplish,” admits Wrede, “you know what I mean, when I’ve just gotta lay in bed and think about a bullet hole in the window, you know?”

For many in law enforcement and the military, especially men, there is a stigma to taking a proactive approach to mental health issues. It’s easier to stay busy and ignore the problem. “I’m embarrassed to talk about it because I want to be resilient,” said Wrede, who went on to admit that “... When my wife called [redacted], I should not have lied to him and said, ‘I’m fine, bro. Don’t worry about me; worry about you.’”

While PTSD arguably played a role in the incident, so did the “us-versus-them” mentality among law enforcement officers, which tends to exacerbate preexisting tensions. Wrede referred to the protesters, the majority of whom, in my experience covering the protests, are local people of color in their early-to-mid 20s, as “terrorists.”

“Anybody that’s — goes against their values and morals of whatever the United States is based on is a terrorist,” said Wrede, “whether it be foreign or domestic. It just seems to me like terrorists [sic] acts; burning and looting and property destruction and the complete lack of disregard of anybody’s safety and personal safety and shooting guns in the street and shooting guns at the police, that’s — that’s not what America does.”

There has been no looting in the Colorado Springs protests, and while there was some vandalism and property destruction May 30, the violence May 31 through June 2 came during confrontations in front of the Police Operations Center, and was limited to interactions between protesters and riot police.

Wrede and Bauer were involved in an arrest on the morning of June 1, in which a man in an intersection was shot with pepper balls and then tackled and punched by five CSPD officers, an incident that drew accusations of excessive force from witnesses.

It is also important to note that law enforcement officers aren’t the only ones suffering from PTSD. Studies have shown that protesters in France and Hong Kong also showed PTSD symptoms following clashes with police. Protesters have lost eyes, suffered broken bones, and risked miscarriages and irregular menstrual cycles due to the use of teargas, which has been proven to be an abortifacient.

While widespread “burning and looting and property destruction” didn’t occur during the Colorado Springs protests, neither did the more serious cases of police violence, although protesters like Ashley Taylor have filed complaints regarding their treatment by CSPD.

Off the streets, the conflict is being waged nationally in front of city councils, in city budget meetings, and in the kind of administrative actions groups like Colorado Springs Oversight is calling for, as prosecutors and law enforcement agencies continue to target protest organizers and leaders. Across the country, police and protesters view each other as combatants in warring armies, and many have the physical and psychological scars to prove it.