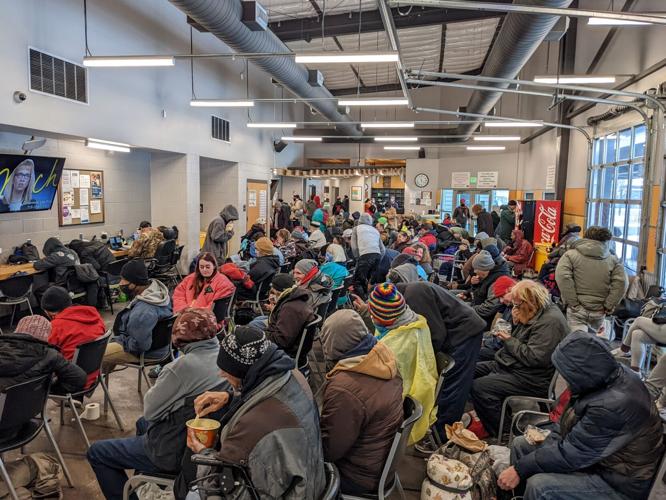 A typical day at the Springs Rescue Mission when winter bears down. 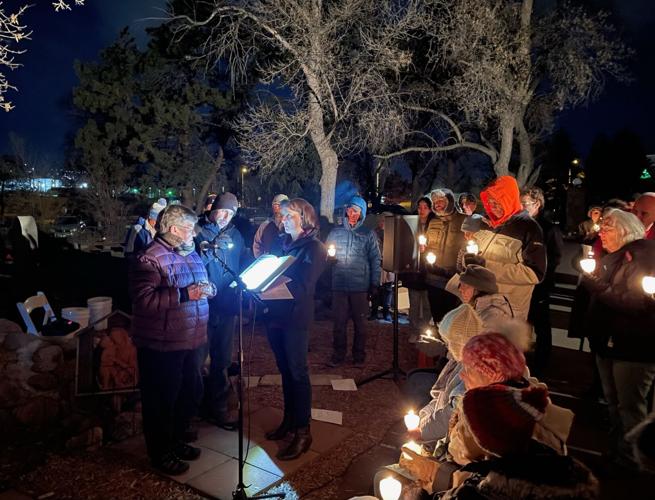 Springs residents attended the Longest Night observance at Evergreen Cemetery on Dec. 21 to honor those who died homeless or friends of the homeless who have passed away. The cemetery site was established this fall after the site of a columbarium on West Bijou Street was sold to a new owner, and the columbarium was moved.

Travis Williams was wearing an extra pair of socks today as he surveyed the Springs Rescue Mission, where nearly a capacity crowd packed in overnight to avoid frigid temperatures.

The Rescue Mission, 5 W. Las Vegas St., hosted 436 people and 27 pets during this cold snap. That's more than usual for this time of year, Williams says.

The shelter's capacity is 450, although communications director Cameron Moix says it can expand that number using mats and cots. "We will take as many people as will come," he says.

Williams, chief development officer, says the R.J. Montgomery Center for families also had a busy night, from what he hears, and several churches opened their doors as a refuge from the bitter cold temperatures that plunged to sub-zero.

"There are several points of light in the community. I believe that so many in the community are working hard to assure the majority of people who want to shelter found shelter," he says. "We had a great amount of people at our facility, so I think the community worked to get as many people off the streets as possible."

Asked if anyone was delivered to the mission by Mountain Metro buses, which were used overnight to help people who were out in the cold, Williams says he isn't sure.

He says it's not unusual for the Springs community to pull together and for an individual to pay for an Uber ride to take someone to the mission. "It's really heartwarming," he says.

The buses, "requested by the Pikes Peak Office of Emergency Management (PPOEM), picked up several individuals and provided a warm ride to a shelter," Mountain Metro Transit said in a news release.

“The temperatures with this storm have dropped to dangerous, life-threatening levels and Mountain Metropolitan Transit is proud to help our community stay safe," Lan Rao, acting transit manager, said in the release. “We are operating at full service during the storm and will be available to assist with rides again after normal service hours if requested by the PPOEM.”

Says Williams: "You and I both know this is a life and death situation. We have seen folks freeze to death in our community. That has prompted so many to ensure there are positive places. Some of those cases are what propelled us to serve the need we serve in the community."

As of about 2 p.m., Colorado Springs Police Department reported no one had been found dead due to the cold. "Thankfully, we have had no such reports from last night. The HOT [Homeless Outreach] team has been out there trying to get people into shelters."

"I'm praying there are not any cases," Williams says. "I'm praying most people didn't stay stubborn and found shelter. It's not a time to let your pride cloud the picture."

Williams reports that people staying at the mission were staying busy during the day. Some were playing cards, about 35 were participating in a Bible study and some were undergoing job training. "It's pretty amazing to see the resiliency of the homeless community."

Williams expects the shelter to be just as full tonight, with more sub-zero temps predicted. "Everyone's planning on hunkering down," he says, noting that at 11 a.m. tomorrow, the mission starts serving its Christmas meal.

The R.J. Montgomery Center couldn't be reached for comment.

The American Red Cross issued a release saying shelters are at capacity in Colorado and Wyoming and officials are working to save lives amid the arctic weather conditions.

Red Cross volunteers provided care and support for 442 people at five shelters, made possible with support of partners from local emergency management, non-profits, faith-based organizations and the Colorado National Guard.

As shelters near capacity, other shelters are on standby to mobilize if requested, the Red Cross said in a release. People needing shelter can call 800-Red-Cross. Leashed domestic animals under the control of a human are welcome at the shelters.