Jane Northrup Glenn, the wife of Colorado Springs mayoral hopeful Darryl Glenn, has announced she will seek an at-large seat on City Council.

She's the first to announce her candidacy for one of three at-large seats that will be up for grabs in the April 2023 city election, as will the mayor's job.

Those seats are now held by Bill Murray, who is termed out of seeking a third term, Tom Strand, also termed out, and Wayne Williams. Strand and Williams have said they'll run for mayor.

Glenn says she's an entrepreneur and author who opposes government intervention in people's lives and supports "minimal use of federal and state subsidies," according to her release.

Glenn bases her government philosophy in Christianity. In her 2020 book, God Punched Back: Knocking Out the United States Government to Set People Free, she "shares her personal story of transformation from a Jesus lover that couldn't pray her way out of a paper bag to a powerful intercessory vessel through whom the Lord protects and redirects the lives of others," according to a description on Amazon.com

The blurb also says, "There is increased activity in the supernatural realm as we move closer to the thousand-year reign of Jesus, and the government and political arenas are hot spots. It's more important now than ever that a political party should not be a Christian's strongest influence in determining how to vote and what position to take on issues. Complete submission and obedience to Jesus Christ alone is the guide."

In her release, Northrup Glenn says, "I believe Colorado Springs has a divine assignment right now to become a beacon for people seeking freedom.... The reason I'm running for city council is to contend with the global agenda at the local level by cutting financial ties between us and the government at every level.”

Northrup Glenn founded Authority Staffing, the release says, a Christian business prototype that specialized in felon employees and which was recognized by the State of Colorado in 2016 and named "1 of 21 Gospel Driven Businesses" by Ministry Today.

"Northrup Glenn’s current business prototype is the American Christian Marketplace Authority, a membership-based staffing solution that provides housing and other benefits for its workers," the release says. "The ACMA is a member of the Colorado Springs Chamber but not ready to launch."

She previously served as United Way of Larimer County director of resource development and as vice president of government affairs for the Pikes Peak Association of Realtors. She's also worked as an account manager for data center services and as a contractor for a real estate company.

Her priorities include supporting core services such as police and fire, opposing financial incentives and subsidies for builders and developers, and not allowing government to have a role in home affordability.

Colorado Springs has never had a serving Council member who was married to a currently serving mayor, at least in recent memory. The couple married in 2016. 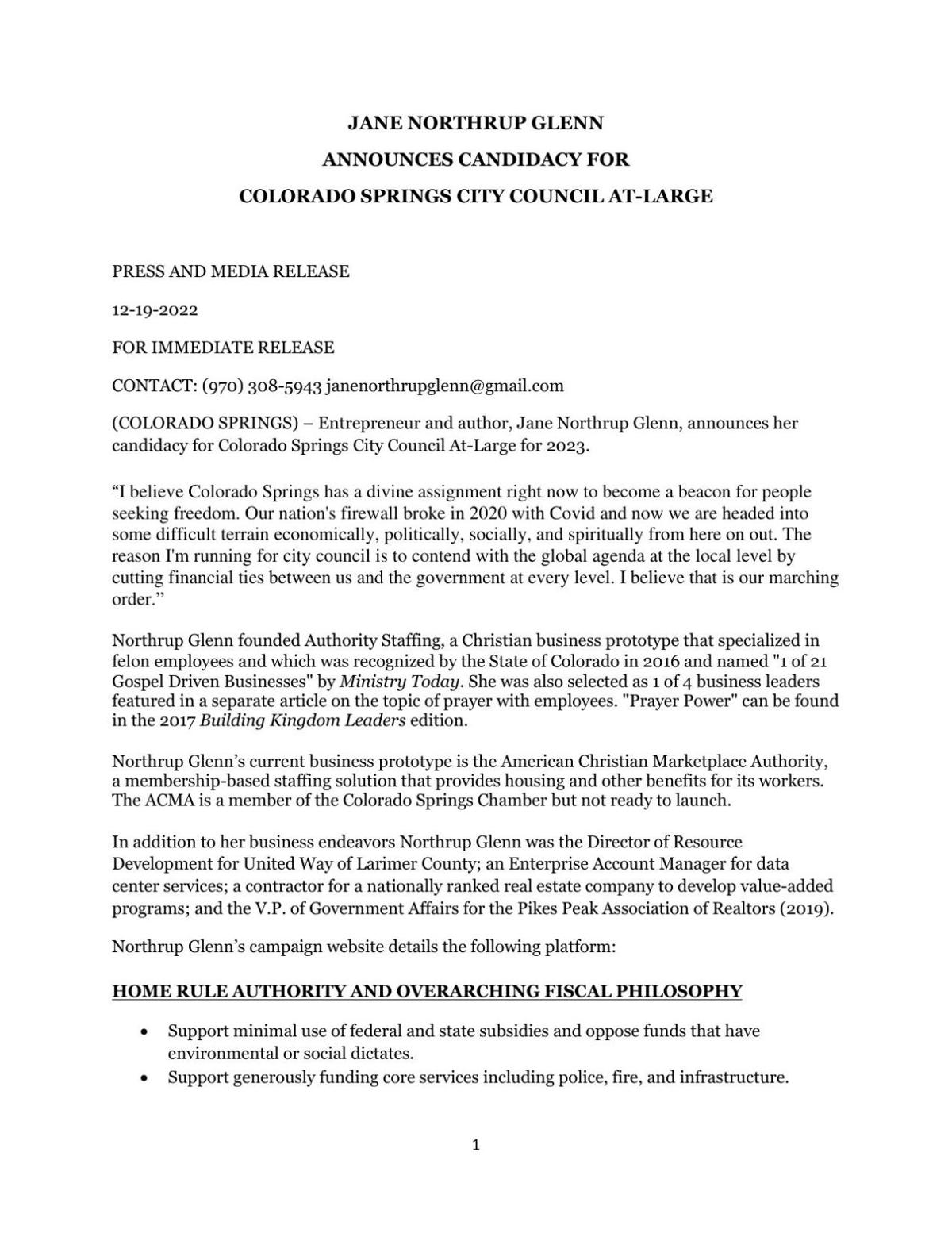