Former congressional staffer Brandon Pope alleges in a lawsuit filed May 13 that his former boss, Rep. Doug Lamborn, R-Colorado Springs, took a "reckless and dangerous" approach to the coronavirus, leading to several employees becoming infected, and that Lamborn has breached congressional ethics on numerous occasions, including using his office to benefit his family personally.

Pope also alleges in the lawsuit filed in the U.S. District Court for the District of Columbia that he was fired in December in retaliation for having expressed concern about Lamborn's policies that didn't protect employees from the virus, some of whom were immunocompromised or lived with family members at high risk.

Lamborn's communications director, Cassandra Sebastian, says in an email, "The workplace safety allegations made by Mr. Pope are unsubstantiated and did not result in the termination of his employment. Congressman Lamborn looks forward to full vindication as all facts come to light.”

She did not address the other claims in the lawsuit, including that Lamborn allowed his son to live in a storage space in the basement of the U.S. Capitol for weeks after he moved to Washington, D.C.

"In the workplace, Lamborn did not require employees in the District Office to wear masks, claiming that he would not allow House Leadership to dictate how he ran his office, and he did not permit all employees to social distance," the lawsuit says. "Worse, when Lamborn and other senior members of his staff became infected with COVID-19 in the fall of 2020, Lamborn refused to implement or follow reasonable and responsible COVID-19 protocols, resulting in the widespread transmission of the virus throughout both the District and Washington, D.C. Offices."

Those offices later closed due to the virus, but Lamborn's chief of staff, Dale Anderson, told workers to not disclose anything about the office being closed or that they had been in close contact with people infected with COVID. Nor were some employees of the Colorado Springs office allowed to work from home, the lawsuit says.

"... as more and more staffers began contracting COVID-19, Mr. Pope asserted his opposition to Lamborn’s reckless practices and stood up for others in the office who were either at risk themselves or who had close family who were at greater risk from the infection," Pope alleges. He was then fired on Dec. 7, 2020, from his job as defense and business adviser in the Colorado Springs district office. 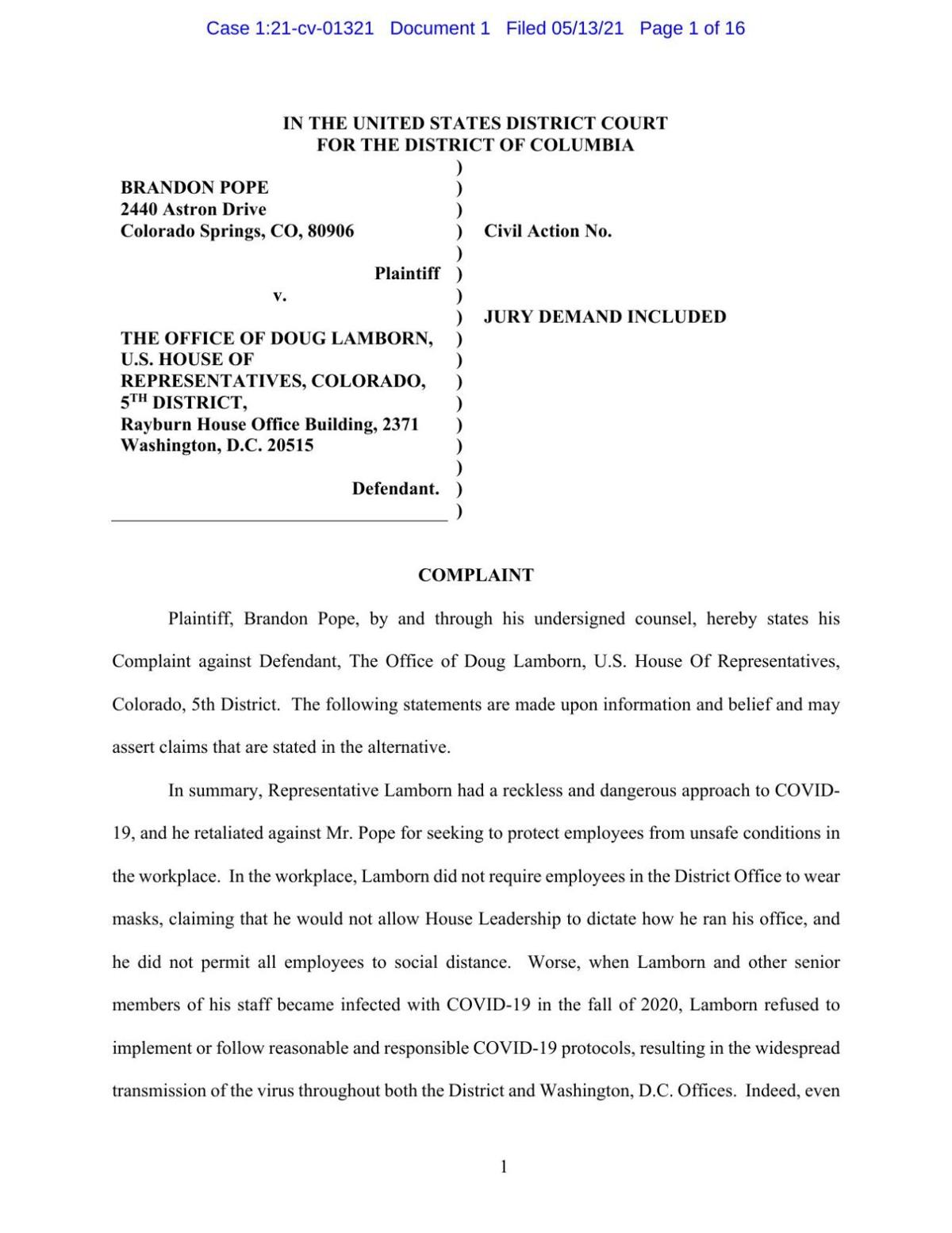 He cites federal law, which mandates that each employer “furnish to each of his employees employment and a place of employment which are free from recognized hazards that are causing or are likely to cause death or serious physical harm to his employees; [and to] comply with occupational safety and health standards promulgated under this Act.”

During Pope's employment employers were required to adopt protocols to reduce the risk, including encouraging the use of face masks, social distancing, permitting remote work, installing sanitizing stations and requiring others infected with the deadly disease to isolate until they were no longer contagious.

The Congressional Accountability Act forbids an office from intimidating or reprisal against any covered employee.

Congressman Lamborn has consistently disregarded ethical rules and norms that apply to Members of Congress.

Pope provides a list of ethical breaches by Lamborn, noting "Congressman Lamborn has consistently disregarded ethical rules and norms that apply to Members of Congress," and shown a "recklessly self-serving approach to his position as a Member of Congress."

The lawsuit cites these examples:

• Lamborn gave his son the necessary access to live in a storage area in the basement of the U.S. Capitol for a period of weeks while he relocated to Washington, D.C. for work.

• Lamborn used the resources of his Congressional offices for the personal benefit of his family. When his son applied for federal jobs, Lamborn required Pope and another staffer to show him how the USA Jobs site worked and to give him tips on completing applications for federal employment. The office also required Pope to help prepare Lamborn’s son for job interviews by asking him mock interview questions and helping him craft his responses.

• Lamborn's office required staff to run personal errands for his family, including loading furniture to be moved to Lamborn's vacation home, helping his wife set up a video telecom system so she could hold personal video calls with family, pick up personal mail at Lamborn's residence while he was out of town, courier personal legal documents, and spend lunch hours preparing campaign mailers.

• Staffers also were made to believe that accepting invitations for family events, including meals with Lamborn's family, was required to remain employed. Staffers talked amongst themselves about others who had been fired for declining such invitations.

• Staff was "compelled" to give Lamborn and his wife Christmas and birthday gifts.

• Lamborn allowed his wife to use his office supplies for her personal use.

Pope's lawsuit says he was a commissioned Marine Corps officer and rose to the rank of captain before retiring from the service in 2018.

In March 2020, Pope began suggesting COVID-related safety protocols and raising safety concerns to the district director and to the chief of staff.

Lamborn, though, didn't take him seriously and didn't impose reasonable precautions, including mandatory mask wearing when meeting face-to-face with constituents.

Anderson and Lamborn "mocked" safety protocols, the lawsuit says, and "belittled" staffers who raised health concerns. In fact, Lamborn claimed the virus was "a hoax" being used to alter congressional and presidential elections.

Anderson "bullied" an employee who was immunocompromised, the lawsuit says.

"In direct response to Mr. Pope raising his concerns, Chief of Staff Anderson developed an obvious and outward bias against Mr. Pope, and he argued with or belittled almost anything Mr. Pope did, for no valid reason," the lawsuit says.

Anderson also accused him of being belligerent, abrasive and disrespectful.

When House leadership pressured Lamborn to limit his D.C. office to 50 percent staffing, he kept his district office fully staffed.

The lawsuit accuses Lamborn of lying to the Office of the Attending Physician by saying he hadn't been in close contact with staffers who tested positive. As a result, he was allowed to not take precautions or get tested.

After several D.C. office staffers tested positive, Lamborn temporarily closed that office and told staff to work from home, but the district office workers, including Pope, were told not to divulge the D.C. office was closed and that they had been in close contact with those who might have been infected.

In October, after a district office worker tested positive, the suit says, "The Congressman was not concerned about the employee’s COVID-19 illness or its potential consequences for the employee. Rather, Representative Lamborn told this employee that his absence from work (awaiting test results and subsequently, recovering from COVID) was holding up Lamborn’s itinerary and his travel plans."

On Nov. 18, after a meeting on Space Force, which Lamborn attended, Pope learned that Lamborn and two staffers who also attended the meeting tested positive for COVID. He learned this from third parties, not Lamborn.

The next day, due to a number of virus cases in his office, Lamborn converted staffers to remote work until after Thanksgiving.

Though Anderson accused Pope of being abrasive, the "true reason" he was fired on Dec. 7 was his vocal opposition to Lamborn's "reckless refusal to adopt any reasonable safety protocols....," the lawsuit says.

Lamborn was elected to his eighth term last November. More than 580,000 people in the United States have died of COVID-19.