A turnout of 500 for the Lincoln dinner has been termed "very successful" by a Republican operative who didn't want to be named, while 400 or more would be considered "quite successful." Pretty good for a party that seemed in a state of chaos not that long ago, including a dispute over voting for chair.

"If you were able to get in, before we sold out, good for you!" Tonkins' release said. "This is going to be an awesome event and you are in for a great time. How I wish we could have gotten everyone in that wanted to be there. The venue just could not give us anymore tables…I tried."

She then urges people to "bring your checkbook, cash, or credit card," because the event is a fundraiser for the party.

She also notes that Greene is "exited [sic]" to attend. If you'll recall, Greene has made quite a name for herself by promoting the Big Lie that the 2020 presidential election was rigged against former President Trump.

The Georgia Republican drew this description from The Washington Post editorial writer Dana Milbank in June: "In the House of Representatives’ crazy stakes, likewise, Rep. Marjorie Taylor Greene, R-QAnon, made an early Run for the Roses with talk of Jewish 'space lasers,' stalking Rep. Alexandria Ocasio-Cortez, D-N.Y., and claiming that mask mandates are tantamount to the Holocaust."

Greene also has been making TV appearances griping about the horrible treatment of those arrested for their involvement in the Jan. 6 insurrection.

Nevertheless, the local GOP is in worship mode over Greene, and offers personal photo sessions with her at a cost of $30. Tonkins noted in the release there are "only 24 spots left." Those getting snapped with the conspiracy theorist will receive an 8-by-10 photo.

Exactly who will be among the attendees at the dinner, at $100 to $2,500 per table, isn't known publicly, but thanks to ColoradoNewsline reporter Faith Miller, a former Indy reporter, we know some of those who won't be there.

In her story published in mid-July, she reports, most state, local and national Republican elected officials from El Paso County didn't respond to the question of whether they plan to attend. County Commissioner Longinos Gonzalez Jr. said he will attend, but Commissioner Holly Williams won't be there. State Rep. Mary Bradfield and State Sen. Larry Liston said they have other plans, and State Sen. Bob Gardner said he is focusing on campaigns to install a Republican majority in the state Senate.

Meantime, the wackadoodle local Republicans have doubled down on the Big Lie that President Joe Biden somehow stole the election, as the Indy's Heidi Beedle reports in this week's cover story.

But that theory suffered a setback when a federal judge issued a scathing 68-page order Aug. 3 in U.S. District Court, Denver, imposing sanctions on the attorneys who brought a lawsuit claiming the election was stolen. They are Gary Fielder of Colorado and Ernest Walker, who practices in Colorado and Michigan.

The lawsuit, filed weeks after the 2020 election, was dismissed in April. It  named as defendants Facebook, Dominion Voting Systems and officials from Pennsylvania, Wisconsin, Georgia and Michigan, among many others.

Calling the lawsuit "one enormous conspiracy theory," U.S. Magistrate Judge N. Reid Neureiter wrote the attorneys for the plaintiffs acted in bad faith, attempted to mislead the court, and "did not conduct a reasonable inquiry into whether the factual contentions had evidentiary support."

Thus, Neureiter ruled, the attorneys should pay costs and legal fees of the defendants.

"... while reports of fraud or election rigging may have been widely disseminated across the internet, by certain media outlets, and in allegations and affidavits submitted in pleadings from failed lawsuits around the country," Neureiter wrote, "Plaintiffs’ counsel were (or should have been) on notice before filing the original Complaint, prior to the attempted amendment, and subsequently, that all of these allegations were heavily disputed, that none had been accepted as true or verified by any government agency or court, that independent investigations by reputable news sources had found no evidence to support the allegations, and that many had been comprehensively rebutted by authoritative sources. This should have put Plaintiffs’ counsel on high alert about the need to do significant independent due diligence before cutting and pasting from failed lawsuits, or, worse, directly copying into a federal lawsuit the ex-President’s Tweets claiming that the election was fraudulently stolen." 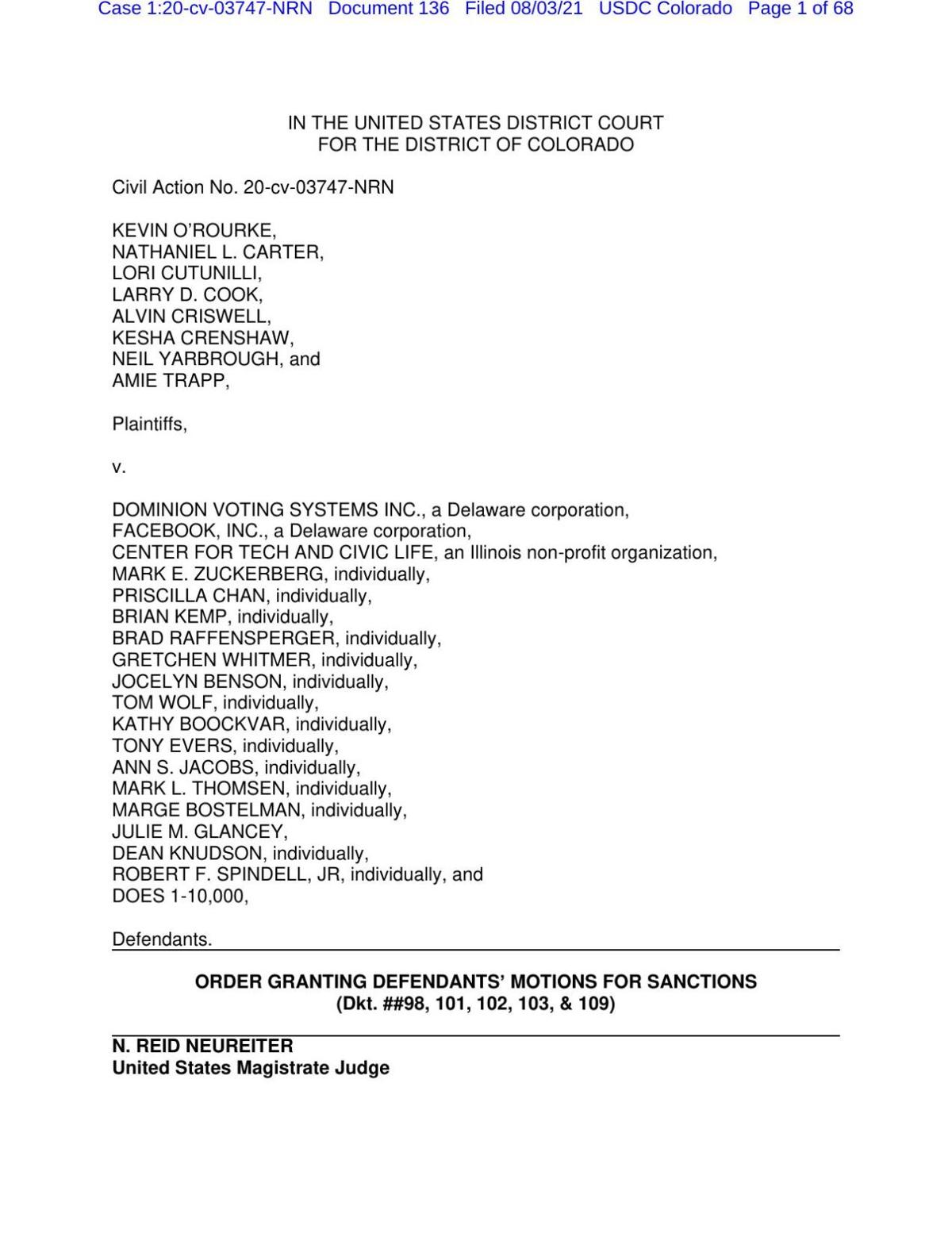 The judge recaps reports of how perpetration of the Big Lie led to death threats to workers at Dominion and countless election officials and, ultimately, the Capitol insurrection on Jan. 6 when Congress was attempting a peaceful transfer of power.

"Horrifyingly, that two-century tradition arguably came to an end on January 6, 2021, when the United States Capitol was stormed during a violent attack against the United States Congress, with a mob attempting to overturn President Trump’s defeat by disrupting the joint session of Congress assembled to formalize Joe Biden’s victory," he wrote.

Neureiter imposed the sanctions, noting, "This lawsuit was filed with a woeful lack of investigation into the law and (under the circumstances) the facts. The lawsuit put into or repeated into the public record highly inflammatory and damaging allegations that could have put individuals’ safety in danger. Doing so without a valid legal basis or serious independent personal investigation into the facts was the height of recklessness."

The defendants have 14 days to submit billings.